in this essay titled ‘a new era, for a post-capitalist architecture?’, nicolas abdelkader lays a heavy charge at the door of architecture. painting it as the ultimate consumer product in a greedy capitalist society, abdelkader unapologetically picks apart the inequality, hypocrisy, vanity, and environmental issues that surround the built environment. the scathing criticism hopes to bring about a real paradigm shift in a sector that’s responsible for 40% of the world’s CO2 emissions.

before ultimately calling for degrowth, abdelkader expresses his main concerns with some evocative renders of famous buildings across the world. these include jean nouvel’s national museum of qatar to illustrate the thousands of migrant workers who have died on building sites in qatar. a californian headquarters visible from the stratosphere, which abdelkader attributes to ‘megalomania’. and beijing’s gigantic new airport, which, in reference to china’s authoritarian regime, abdelkader says is like choosing ‘in full consciousness to be at the service of repressive powers’  all in the name of financial reward. 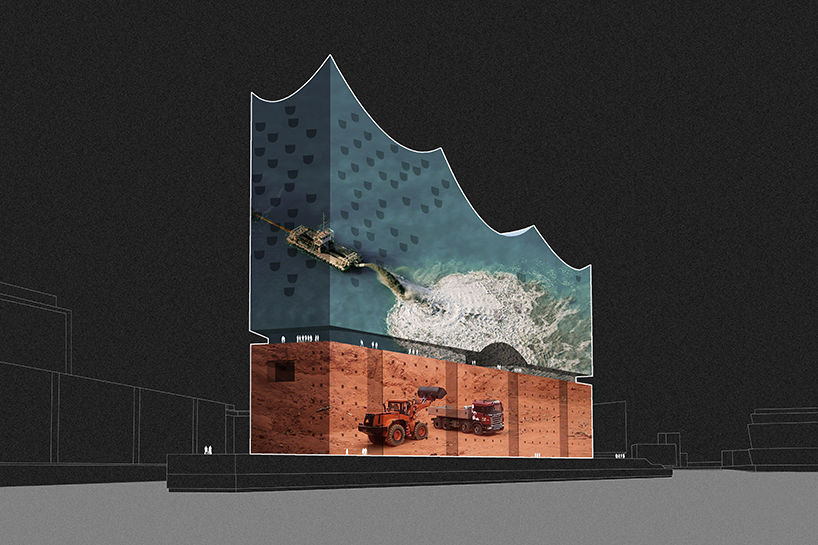 nicolas abdelkader writes,‘it is clear that the ogre of neo-liberal architecture and its followers have reached a dangerous breaking point that will have to be healed. this bodes well for the future because it is an opportunity for a global model to be urgently rethought. despite all these ‘tasks’ in the history of construction and in the era of king capital, which makes our deviances all the more understandable, we will have to come to terms with our heritage and move forward. after all, we have seen others, the art of building was born with the world, the builders and their mistakes with it. most people will not become followers of gandhi or lao tzu, and we will not be able to help some men to tear themselves away from their own contemplation or from their heritage, or even from their desire to mark eternity with their projects. 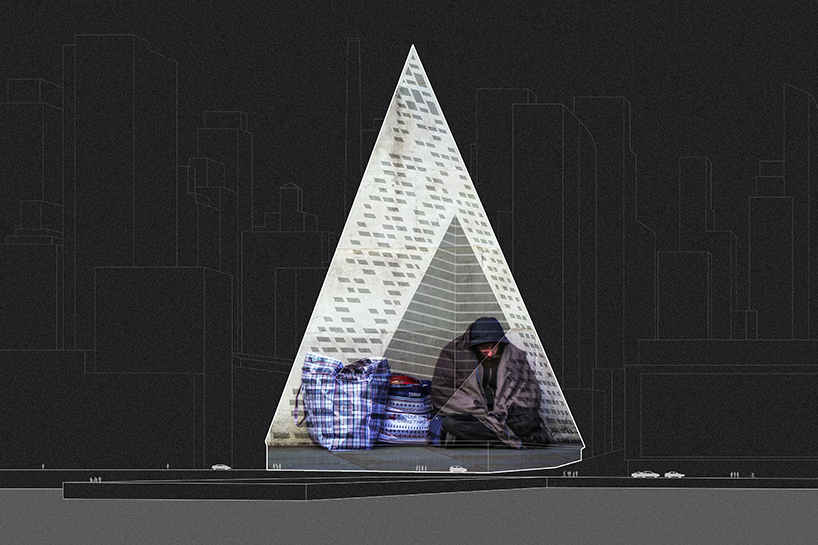 nor will we overestimate the capacity of architecture to positively influence the life of the city or even seek our salvation in the ideology of spatiality. changing the city to change life is a vision that no longer has much reason to exist in a sector where the cult of personality, technical utilitarianism and industrial productivism are devouring everything, block by block. a sector that accounts for 40% of global CO2 emissions, that plunders the physical resources of the planet and contributes ever more to widening the gap between the poor and the rich. this sector has a responsibility to change its practices. it’s an understatement to say this because it is indeed an ecocide that is at work and the ‘big’ architectural firms are partly responsible for it! 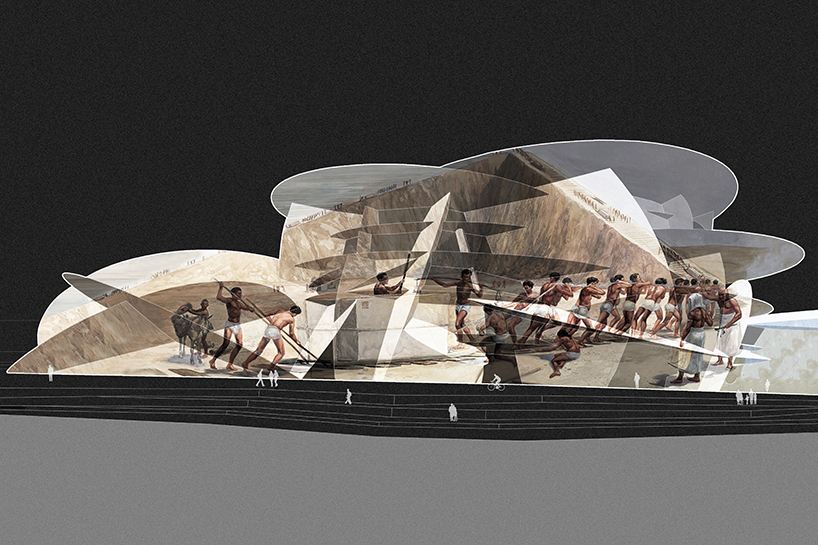 more concretely, is it possible to make the construction sector evolve ‘in depth’ towards practices that are respectful of the planet and its inhabitants? is a real ‘new deal’ for architects and the construction sector conceivable? could we reconcile our current system based on growth, productivism, comfort for the richest and at any price? with more desirable objectives which are, the reduction of environmental pollution, the reduction of social inequalities, an equitable distribution of wealth, and a reasoned use of resources? 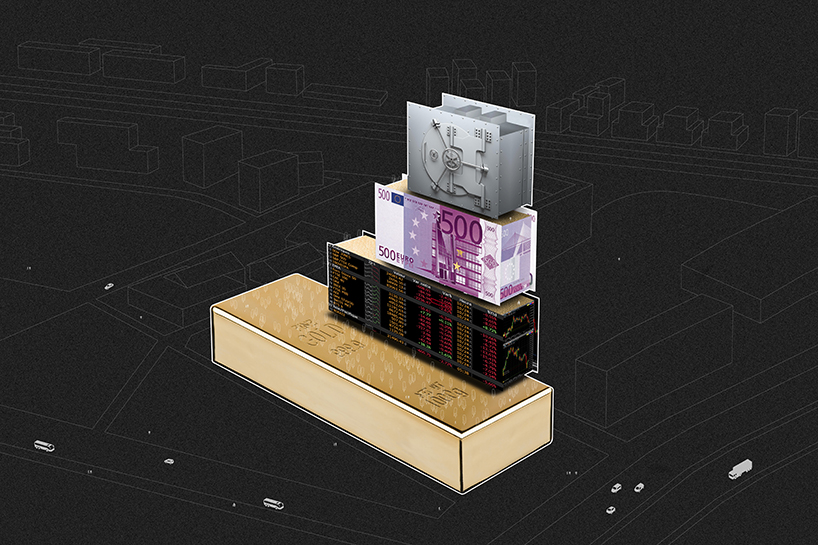 and on a planetary scale, could we imagine that the building and public works sector would (finally) do its part to reduce the global temperature rise to well below 2°c (the objective of the paris agreement). this would lead it to reduce its global greenhouse gas emissions by a factor of three by 2050. by maintaining a growth-based model while meeting the vital needs of 10 billion people by 2050, particularly in terms of quality of life and employment? 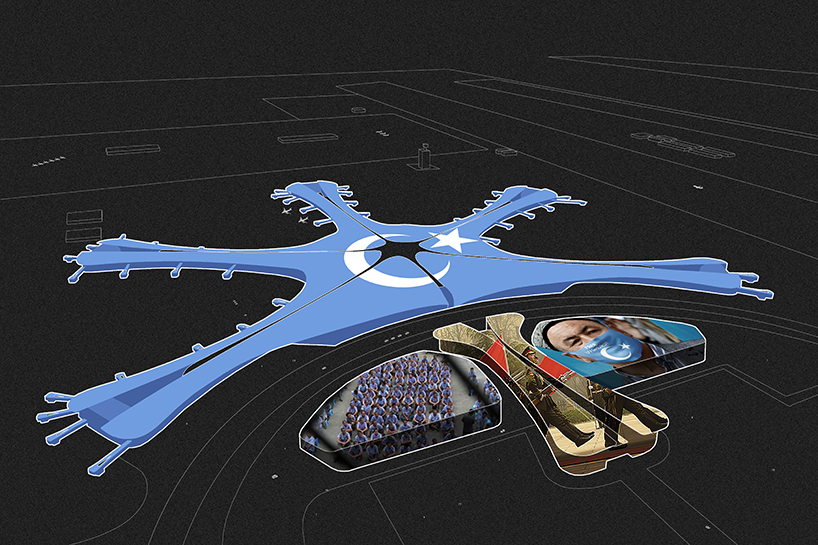 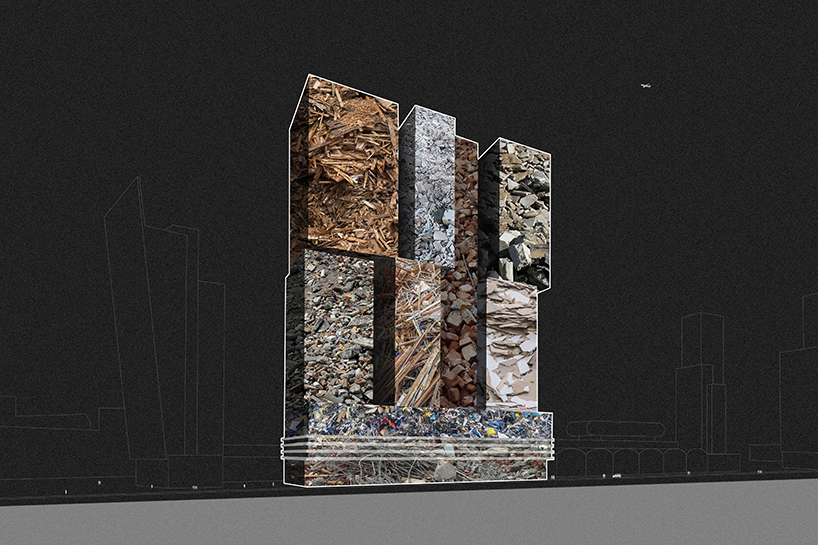 the world currently has around 3.5 million active architects who ‘produce’ the architecture we need, but also the architecture we don’t have, where we have never needed it. do we need the smart city? a brand-new natural history museum? the three-hundred-meter-high tower? the €12 billion airport? a gleaming philharmonic orchestra? a €580 million technological toy to reprocess our waste? from the luxury villa? demonstrations of singularity within the large real estate complexes? etc. etc. etc. 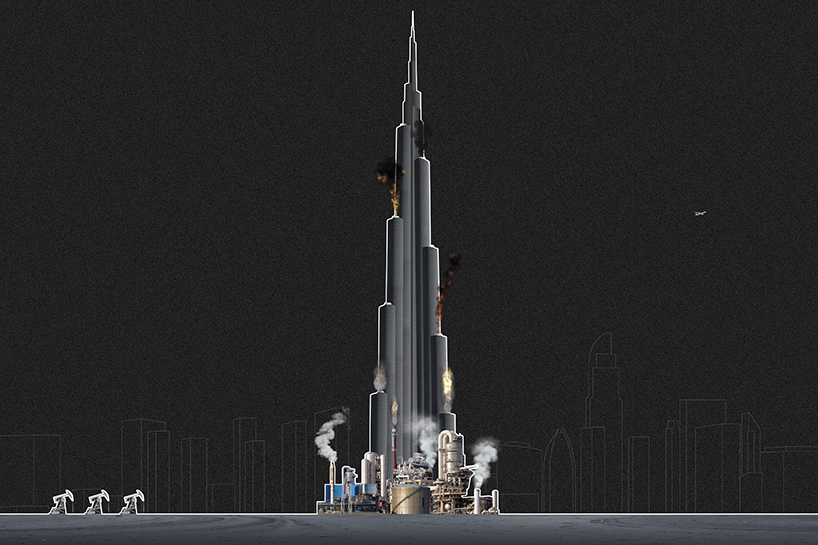 because to avoid making an already critical situation worse, future action will inevitably have to be at the crossroads of voluntary degrowth (and on all levels: construction, mobility, leisure, heritage, etc.) and the social and solidarity economy. rehabilitate the already existing heritage, promote short supply chains and the reuse of materials. to set up a cooperative economy, to develop local sectors and know-how on a regional scale. etc. 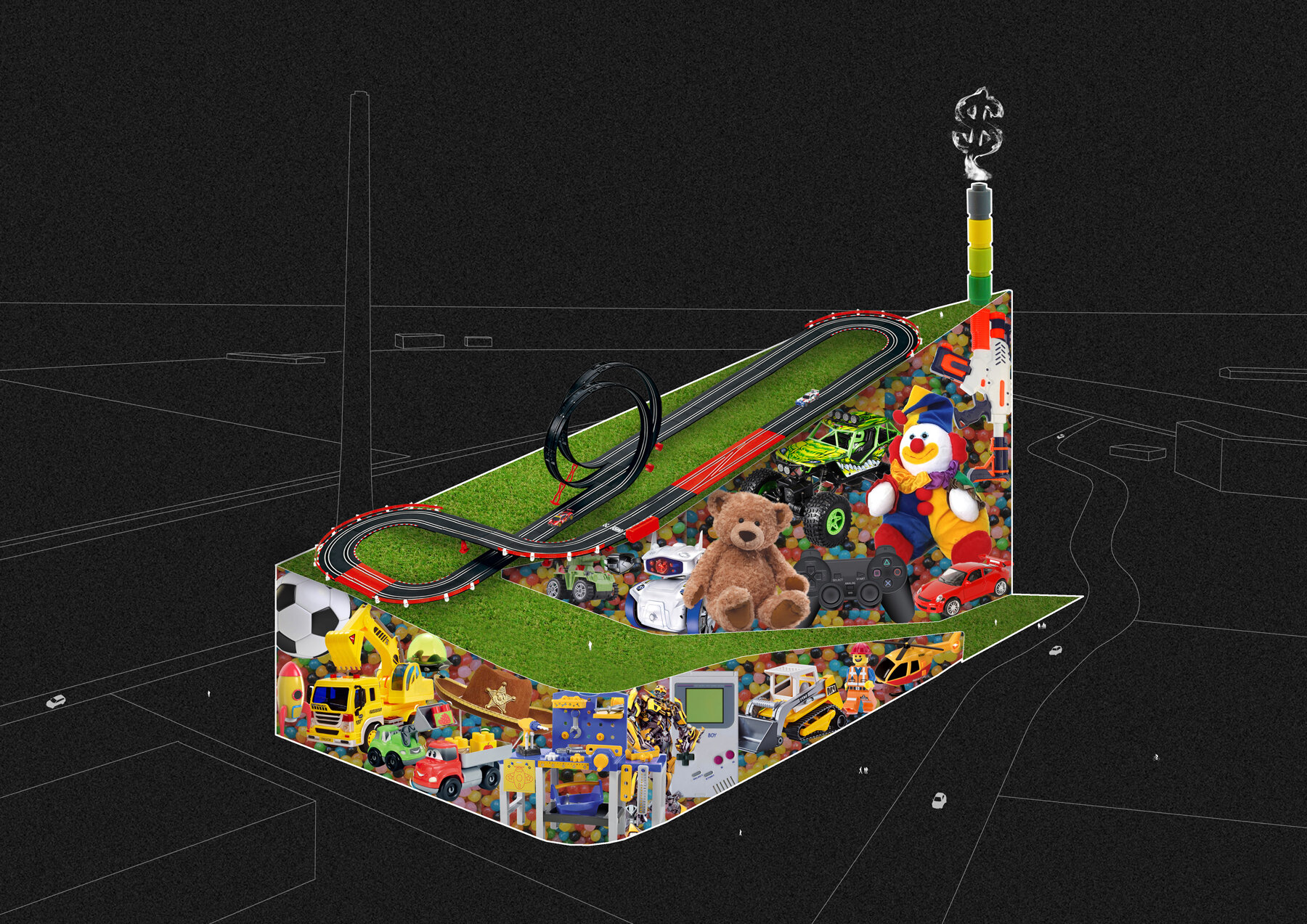 the large agencies (and the smaller ones too) and the so-called ‘stars of the profession’, have more than ever the duty to set an example, to students of architecture, engineering and urban planning schools, etc., and especially to public opinion. but do they even want to? indeed, it seems to me that, if they do not want to change their own practices, perhaps it is time for those who have abdicated and whose work harms society to change course and consider retraining (or early retirement)? indeed, the current 7.5 billion inhabitants and the 10 billion to come will need much more than architecture to live with dignity. 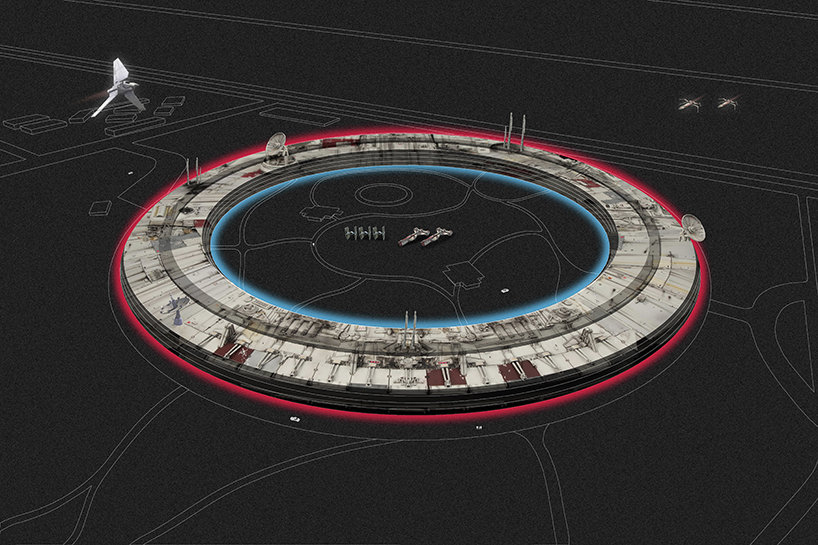 perhaps it is time to consider a complete and multilateral overhaul of the programs taught in architecture and engineering schools around the world?

perhaps it is time to act in real cooperation and to set up a true international consortium between schools, agencies, companies and states that do and think architecture on a daily basis?

perhaps it is time to put an end to the competition of professionals through the logic of competitions and public contracts which develop individualism and considerably harm the logic of collective interest and the construction of a more united world?

perhaps it is time to finally turn away from the vain, narcissistic and prestigious architecture of power whose only considerations are aesthetic and economic?

perhaps it is time to react in order to avoid the decline of architectural doctrines and the dissolution of criticism in public space?

but perhaps it would be time to do much less architecture, but in a fairer, more sober and respectful manner of the living?’ — to read nicolas abdelkader’s essay in full, you can visit his website here.

essay: a new era, for a post-capitalist architecture?
by: nicolas abdelkader