recently ‘phyte’, a 380m mobile tower was announced as the winner of a competition held by the fondation societe tour eiffel. however the designer nicolas mouret was later stripped of his prize because he is not officially an architect.

‘gus eiffel, who was an engineer and not an architect, must have flipped over in his grave. but even he couldn’t change the rules of the competition that carries his name.’

‘as for nicolas mouret, who is passionately involved in architecture, design and photography he ‘knew that he had overstepped’. so no outcry, no bitterness, just the pleasure of having been the real winner, however short-lived.’

‘a touch of nature in the city ‘mobile but stable, the tower dances with the winds. it brings swaying lines to a static city frozen in verticals and horizontals, curves that remind us of ocean swells, moving trees and rippling meadow grasses. phyte springs up like a stalk from an invisible base at the end of the champs de mars. it is anchored in a sunken space, sacred and impenetrable, surrounded by turf that slopes down to its centre. people can lie down there and take in the contrast between peaceful eiffel and playful phyte’. 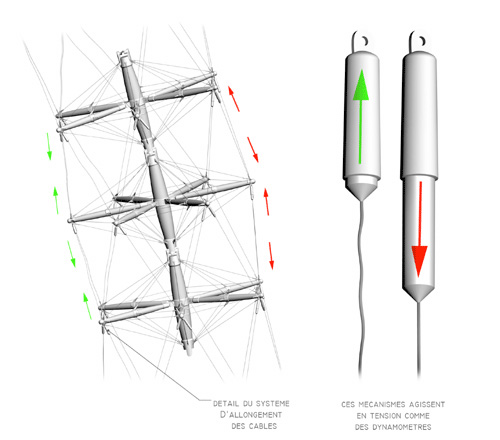 ‘according to mouret the project is entirely feasible: its eight mono-bloc structural members 50 metres high are articulated by gimbals and guys that ensure stability while allowing rotating movement. they are fibre concrete tubes filled by ultra strong fibrecrete and carry spoke-beams with triangulated extremities, stiffened and tied by cables.’ 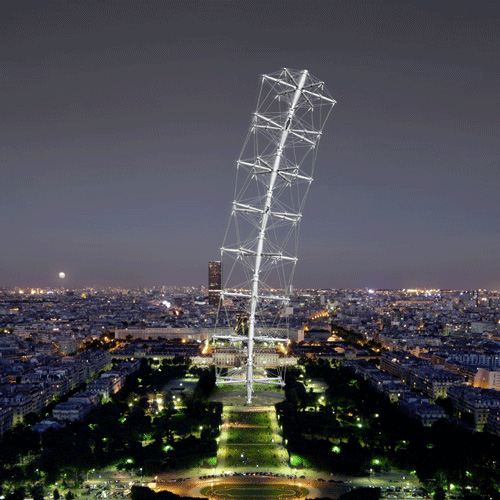 ‘the mechanical energy of the rocking tower generates electricity sufficient for its lighting. it thus becomes epiphytic, lighting up to the rhythm of its movements and creating a spectacle similar to that observed in certain planktons, glow-worms or fish.’