it has been announced that NL architects, in collaboration with BeL (bernhardt und leeser), has been chosen to construct a new development within hamburg’s st. pauli neighborhood. known for its red-light district and its coexistence of extremes, the area is viewed as a unique location that offers room for a diverse range of subcultures.

after a forced eviction of the ‘esso häuser’ complex in december 2013, focus switched towards securing the return of tenants to a new building. after an intense participation process with the citizens of st. pauli, a design team was chosen to transform the now vacant 6,000 square meter plot along the famous reeperbahn. 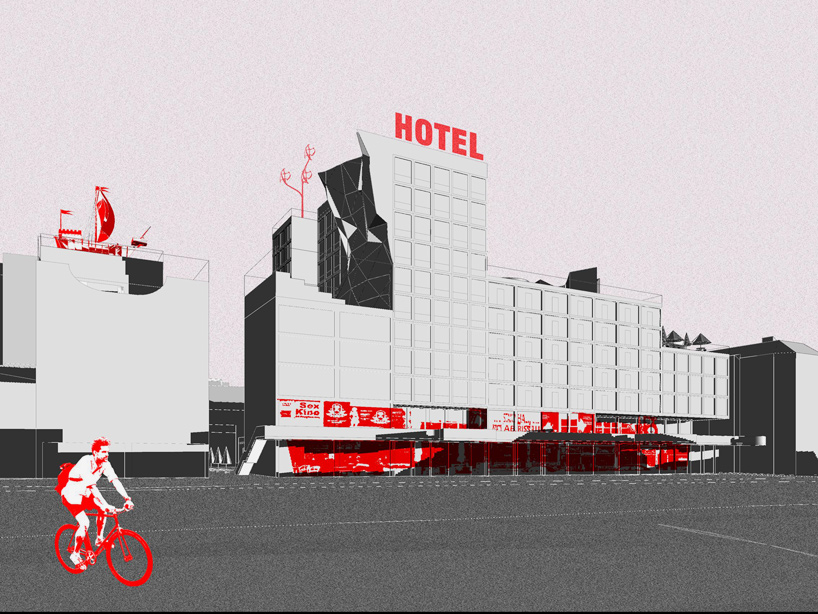 the hotel is placed adjacent to the busy public square

the urban plan is based on a strategy of small parcels in order to guarantee diversity. specific residential typologies are organized in a range of coherent independent buildings. within each building the units are simply stacked; the lack of internal complexity will keep the apartments affordable. residents of a similar lifestyle will share one building; in this way, the homogeneity within each building meets the heterogeneity of the entire complex on the streets.

the front door is the interface between public and private. the number of doors determines the degree of diversity in the public domain: more doors means greater diversity and more potential interaction on the street, viewed as a stage for public interaction. the resulting urban complexity is an instrument of tolerance. 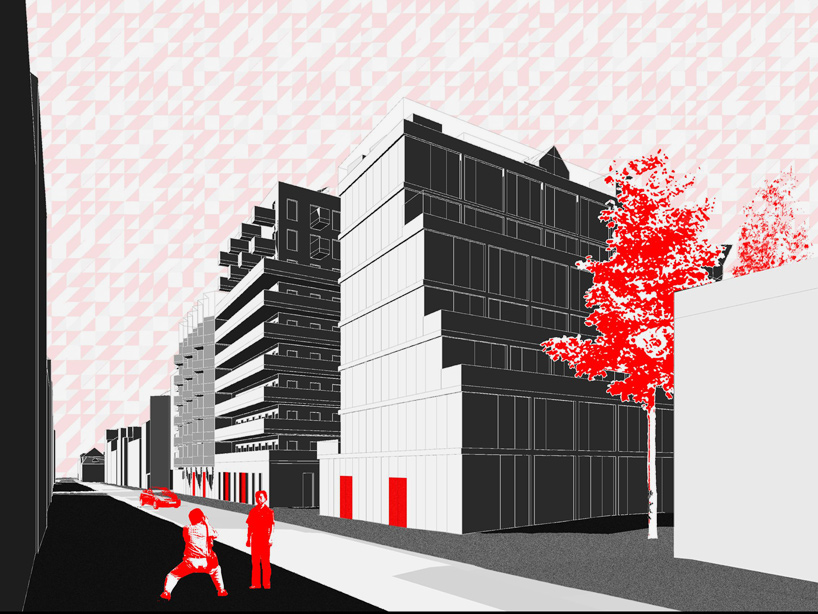 the overall plot will be subdivided into four properties

the overall plot will be subdivided into four properties, each assorted according to their usage. this system is deployed both as a social and an economic tool. the hotel is placed adjacent to the busy public square, the subsidized housing along the more quiet streets and the rental and co-op accommodation within a new street.

on the basis of the interactive placement of the diverse building types and the zoning regulations, a three dimensional and heterogeneous neighborhood comes to life. this configuration defines the height of buildings relative to their neighbors, forming a dynamic perimeter block that accommodates programmatic, social and formal diversity.

the position, size and height of the blocks result from the negotiation between the different plots and the zoning rules. unlike a strict masterplan the proposed strategy allows for alternative layouts in the further development of the project. the higher buildings are forced to step back according to planning laws, creating a vivid outline with a degree of plasticity that forms potential surface for appropriation. 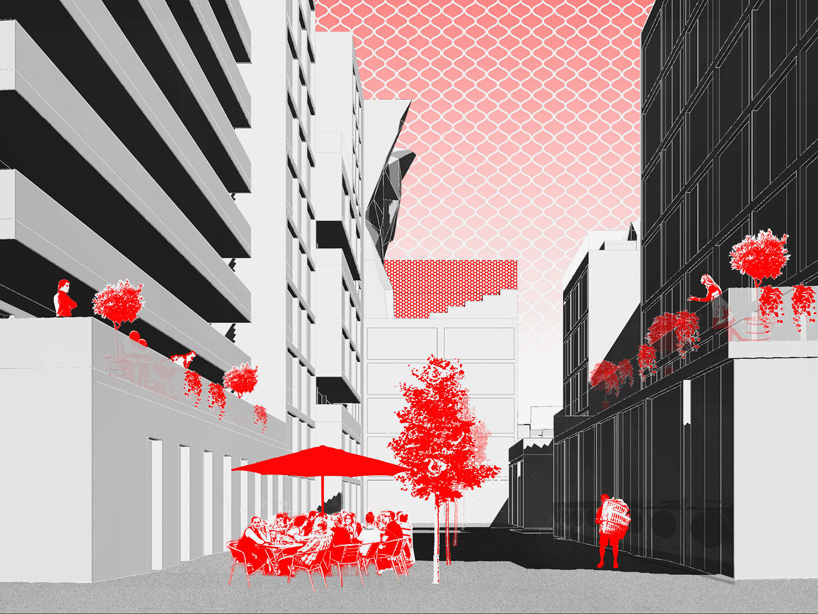 the introduction of a new street between the spielbudenplatz and kastanienallee is an important tool in solving the required density, and a way to provide access to the apartments. without it, some entrances would inevitably be placed in inner courts, creating an ambiguous public/private definition.

the new street increases the public perimeter of the block, forming an optimized interface with the city. the strategic surfaces of the urban block will increase interaction among the new street, the ground floor, and the roofs. rather than offering more space for the notorious stag nights on the reeperbahn, the road is intended to cater for the neighborhood, supporting a range of functions.

here the numerous sub-cultures of st. pauli, young creatives, hotel guests, residents of the apartments, families living in the baugruppen, and elderly can congregate. the numerous activities on the public square generate a lot of noise, meaning that the area is too loud for housing. consequently, the hotel and the specific bayonet shape of the street helps to reduce the noise levels. 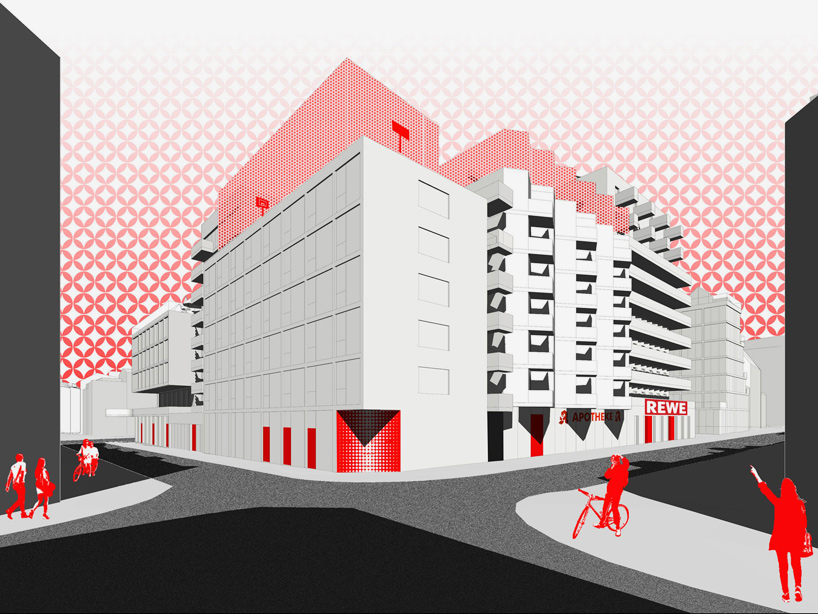 the ground floor features 42 doors that provide access to a range of functions sparking potential exchange with the city. meanwhile, a ‘balcony’ oriented to face the city was one of the specific desires of the locals involved in the planning process. accessible flat roofs are used for either public, collective or private use, clustered in relation to their individual program. the area will get a basketball court, a playground and a sun terrace, while the hotel features a roof garden with a sauna, bar and pool. a publicly accessible skate park including a climbing wall, outdoor theater and pirate ship are located on top of the st. pauli museum. 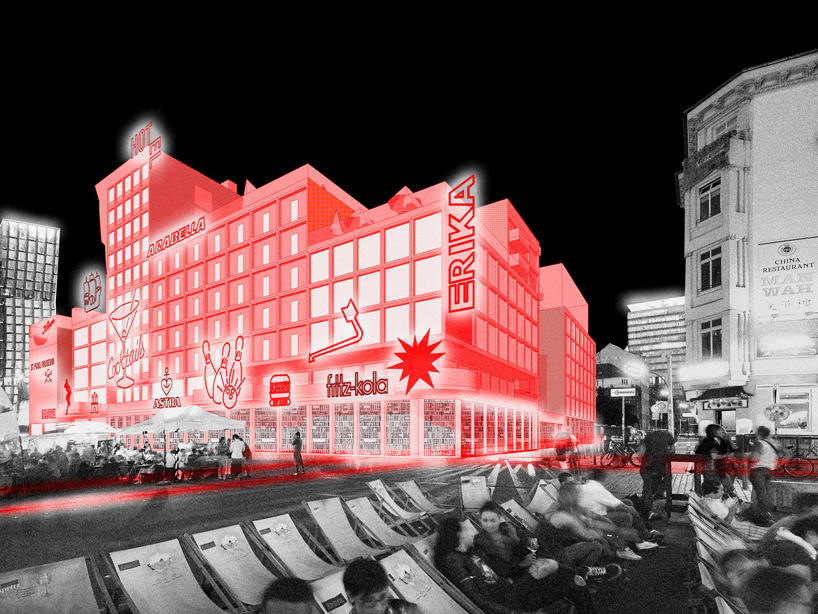 the public square at the heart of the scheme

‘after years of sometimes vicious struggle, st. pauli will see the emergence of a truly site specific urban cluster that seems to meet the needs of local residents as well as the commercial investor,’ summarizes NL architects. ‘the collaboration between the bayerische hausbau, the local government and the local citizens has led to a proposal that seems to satisfy all parties involved.’ aerial view of the development 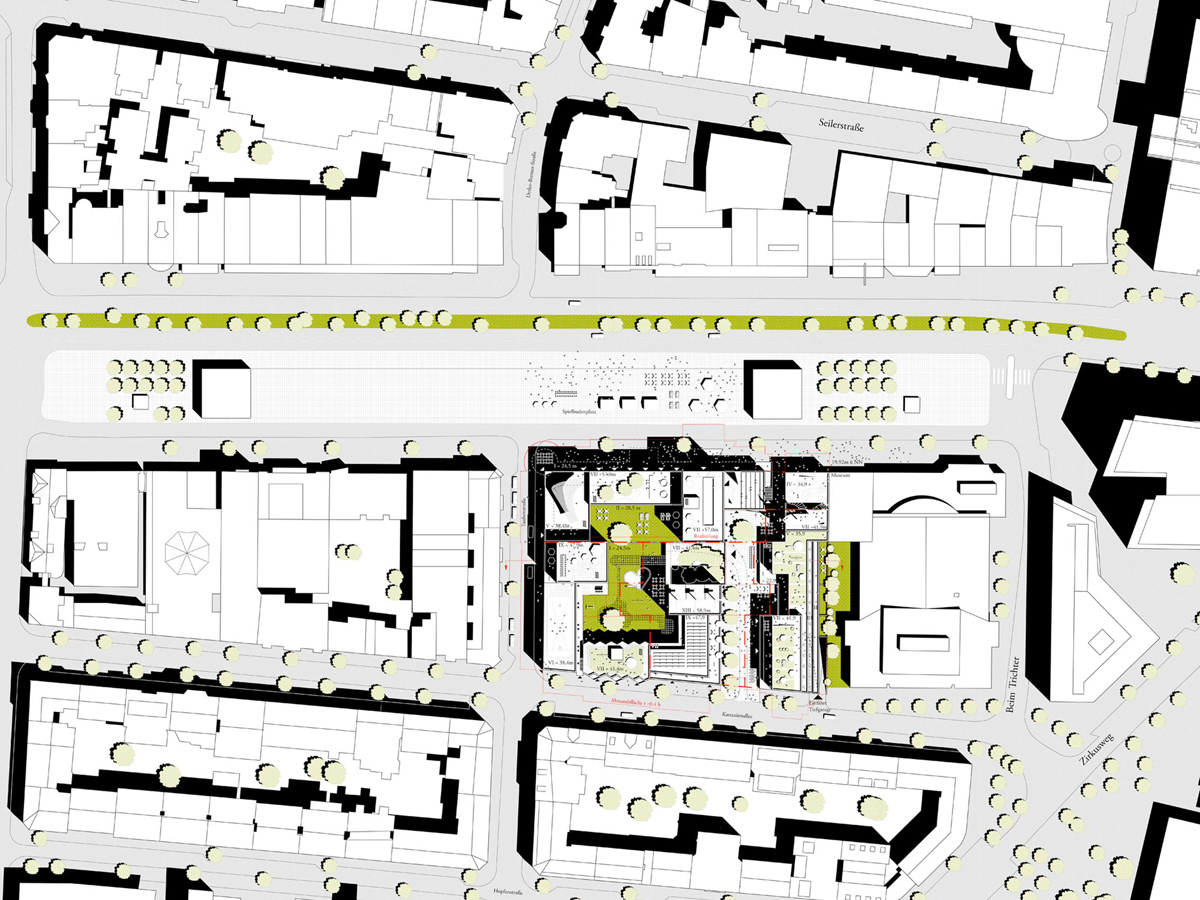 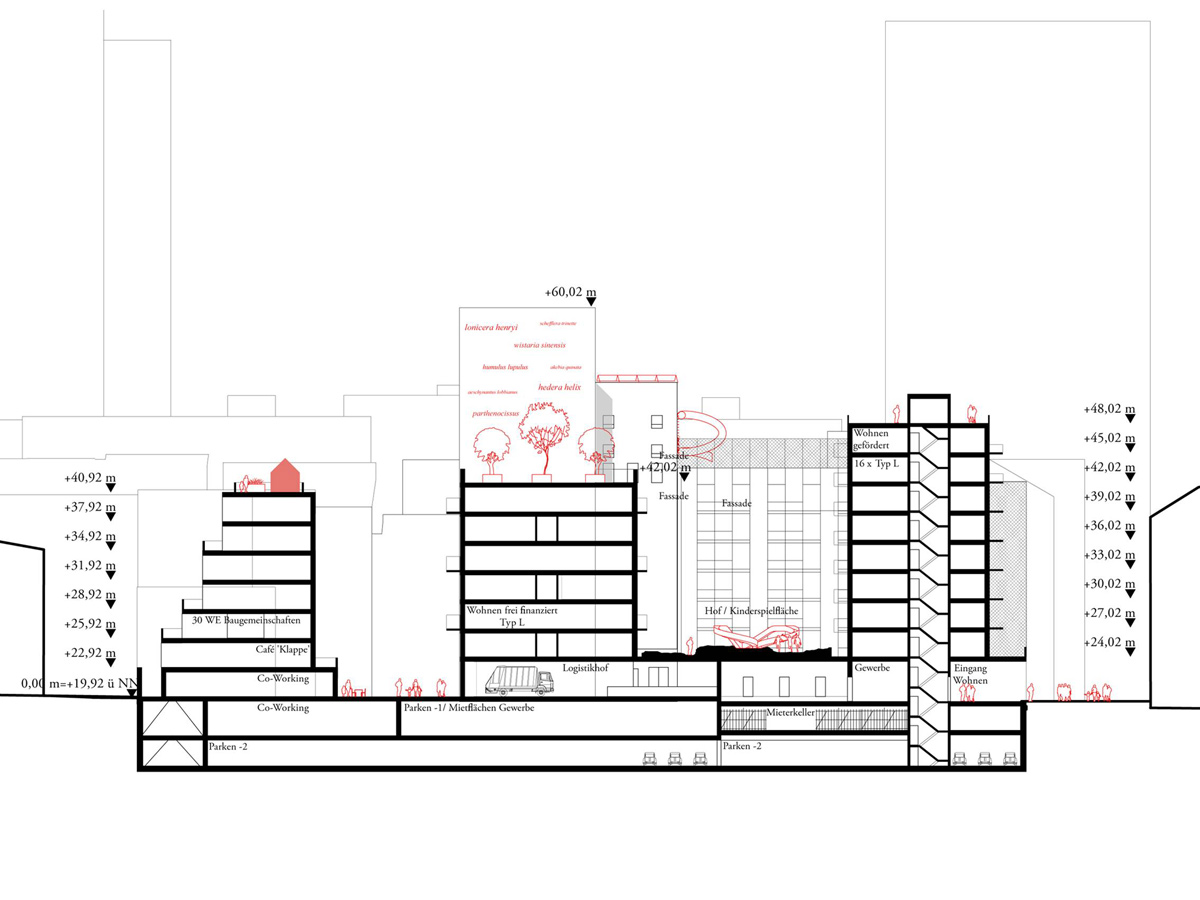 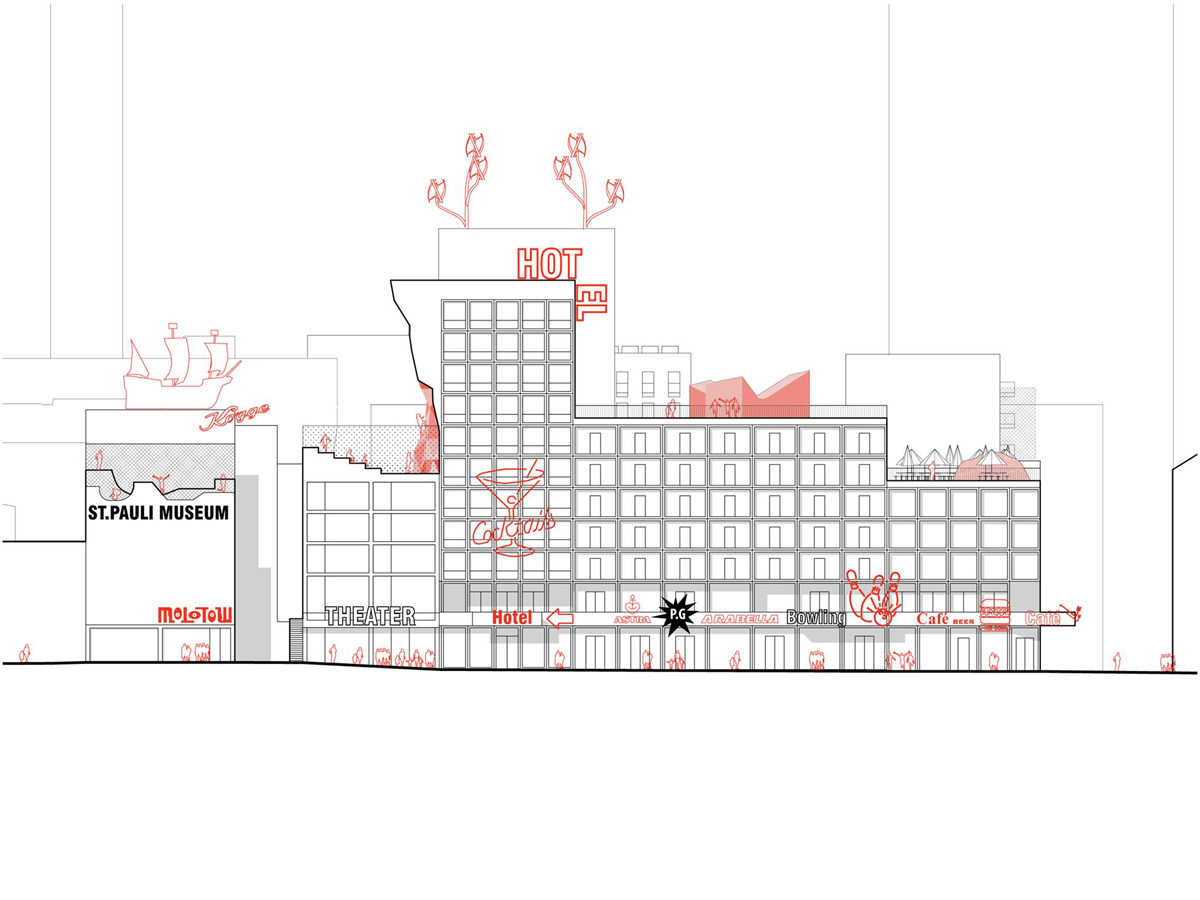 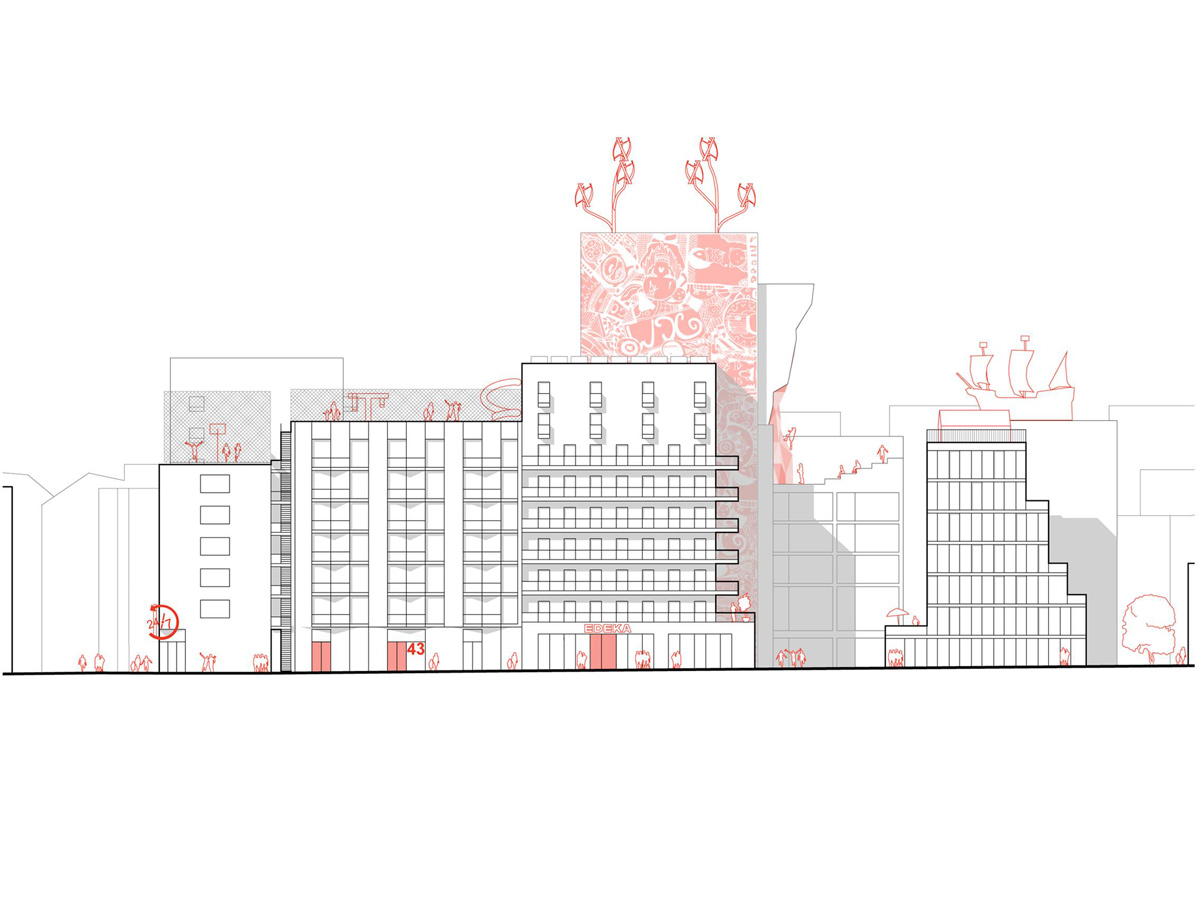 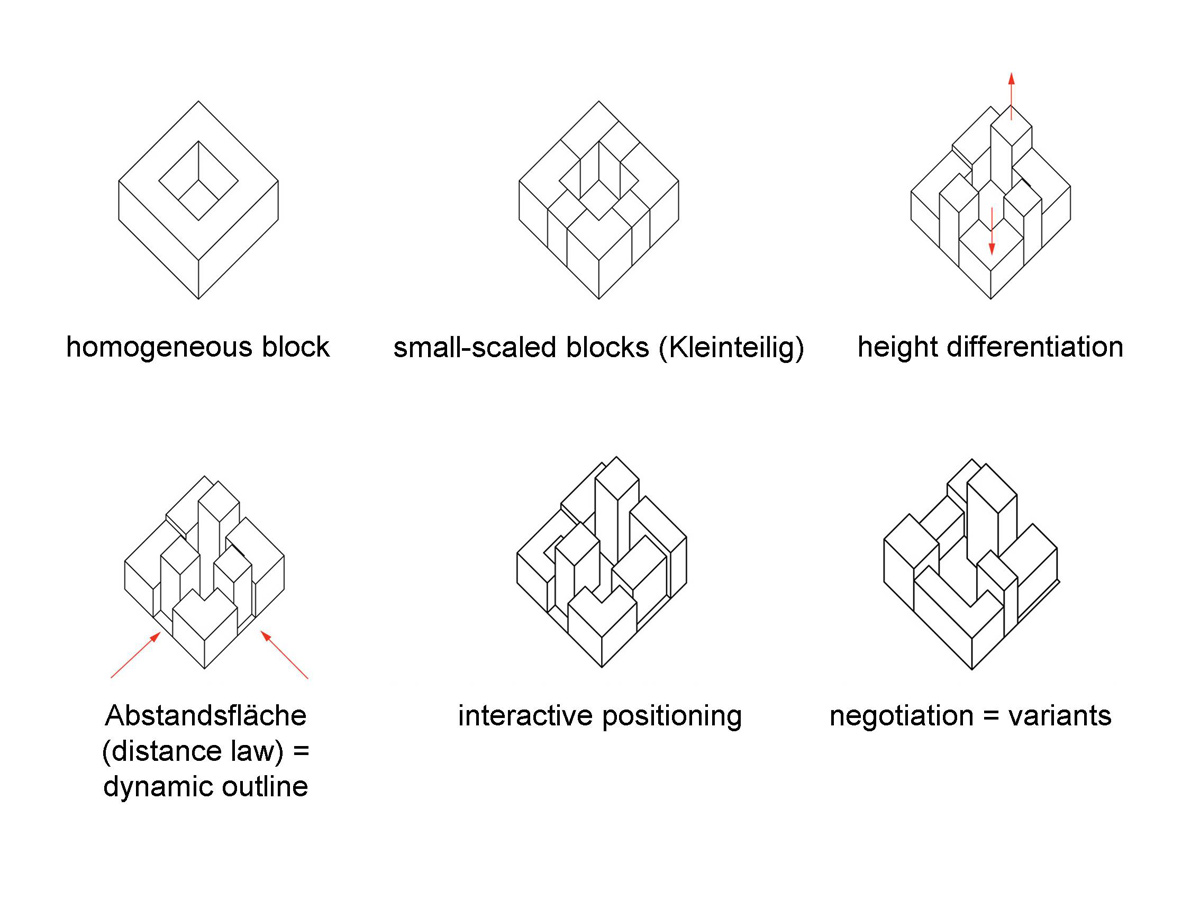 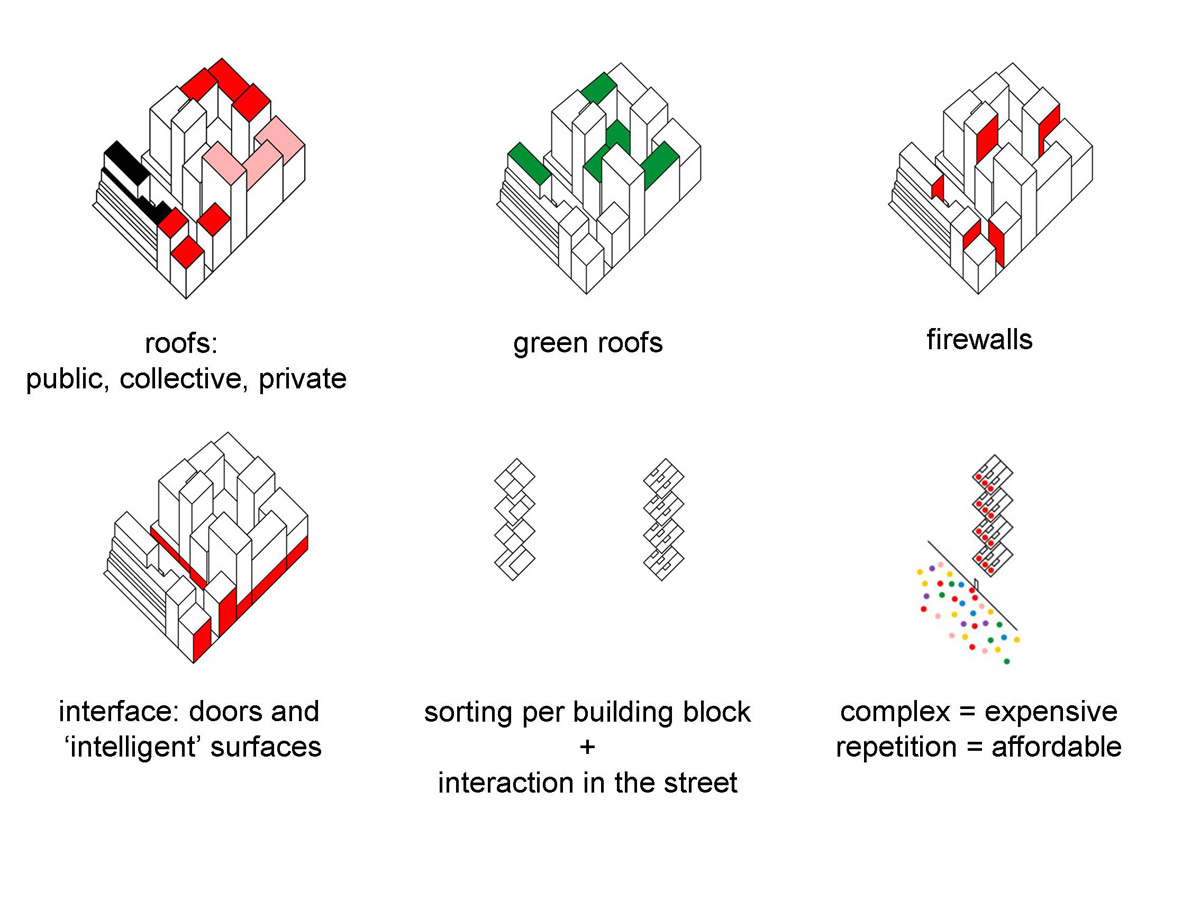 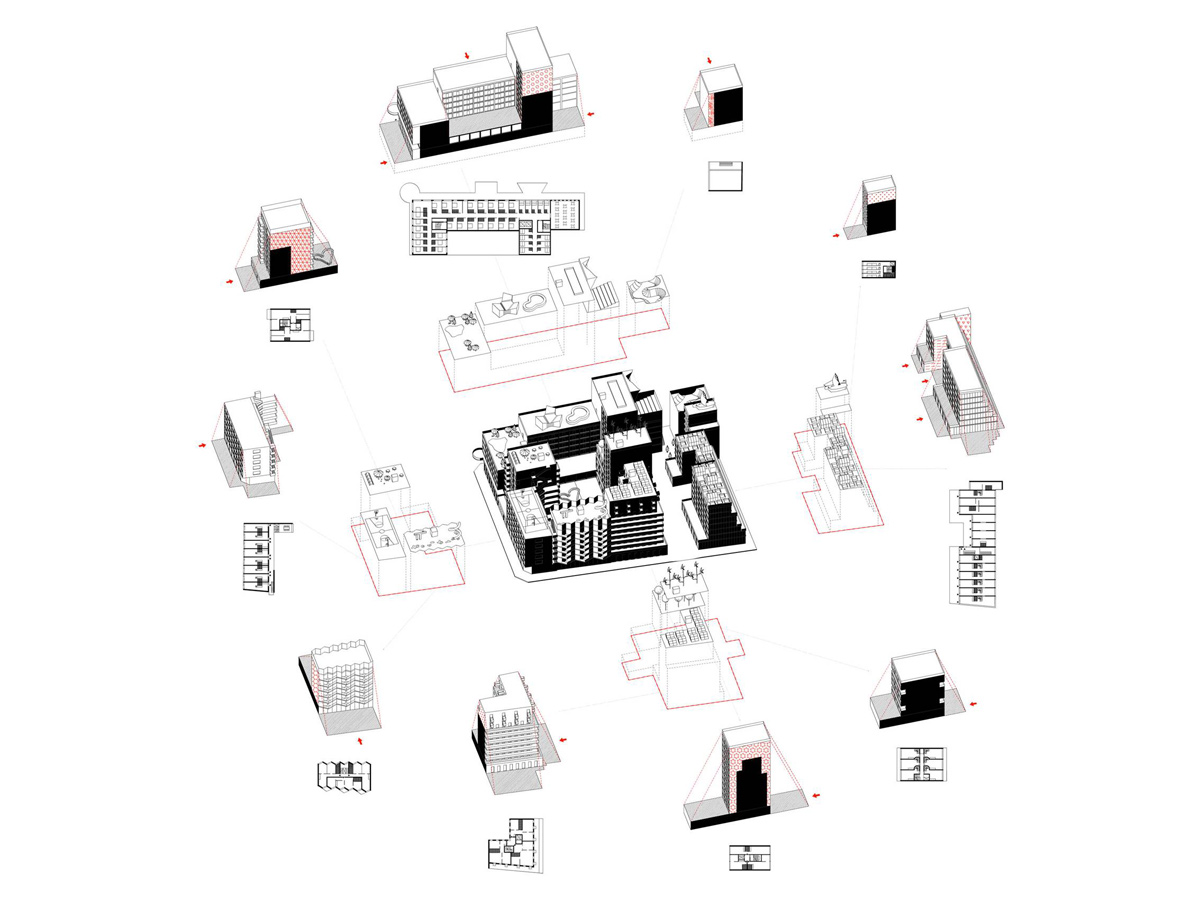 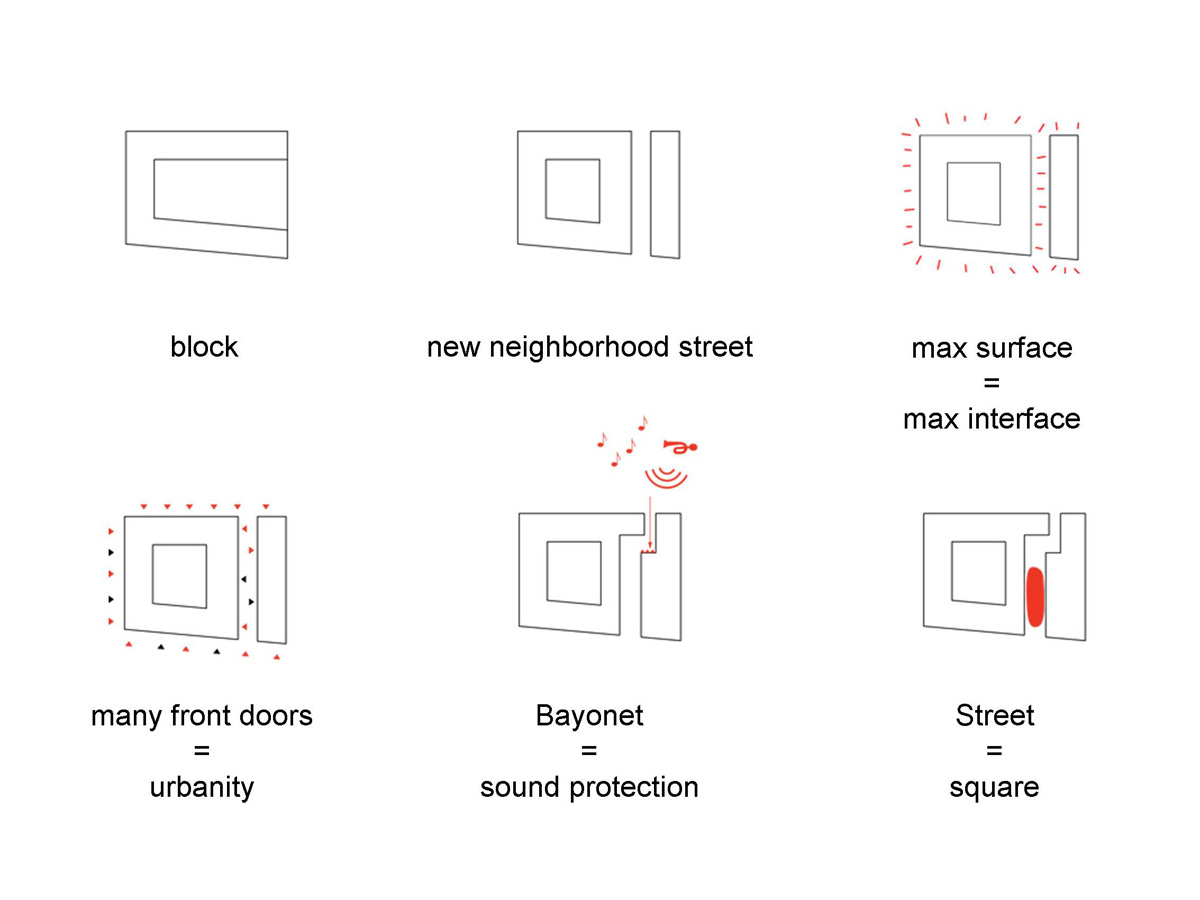 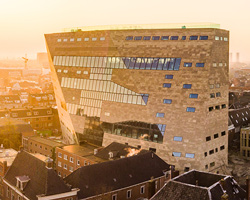 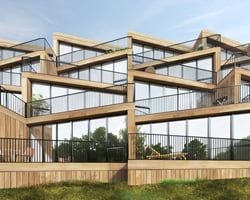 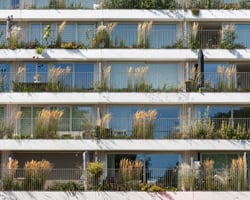 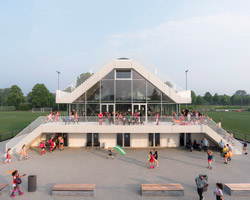 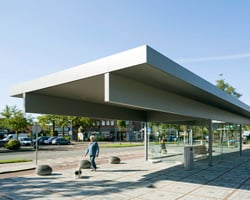