architects and TU delft students thanat prathnadi and joana vilaca unveil their proposal for ‘node 1’, an imagined satellite recycling and manufacturing space station in low earth orbit (LEO). with both creators extremely intrigued by the architecture of space and earth observation, this project ultimately acts as a manifestation of their personal curiosities. the proposed structure intends to contribute to the creation of a legal framework for space activities, aiming to prevent the unregulated release of satellites. 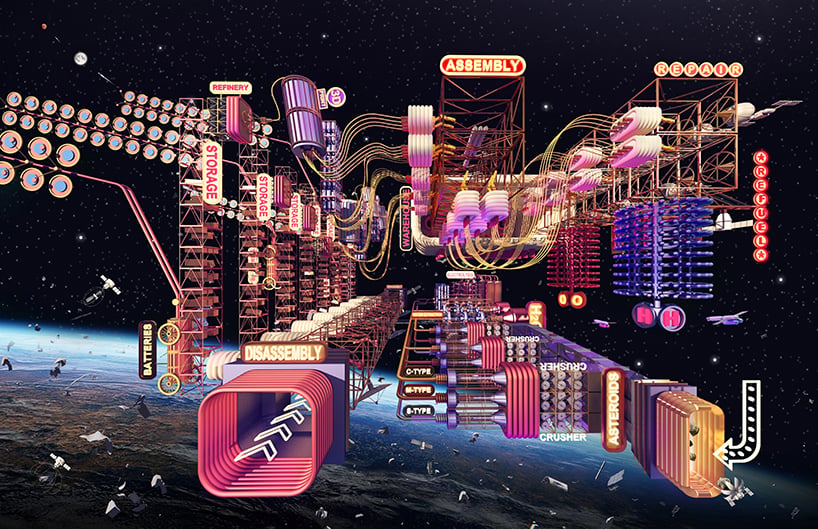 nowadays, the launch of satellites into space is becoming a frequent proposal, intending to assist the collection and storage of crucial data from atmospheric readings. besides that, it can also accommodate various commercial activities and other private projects. ‘however, given the current lack of regulation it is easy to imagine this technology being misused by private corporations or uncooperating nations’ thanat prathnadi and joana vilaca share. the potential catastrophic effect of satellites can already be seen. satellites have already been deployed and they have been spotted all over the world polluting the night sky. this is especially problematic for astronomers, who rely on clear skies to study the universe, as well as migrating animals who rely on the stars for navigation. 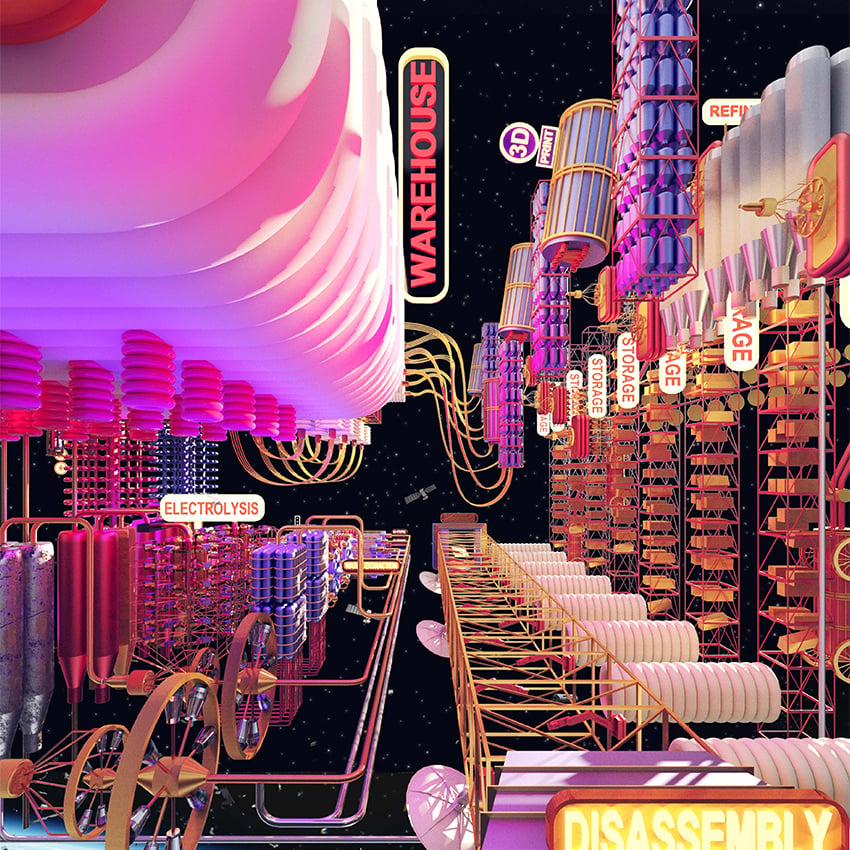 the ‘node 1’ spaceport intends to confront this issue and help avoid unregulated satellite launch, so that low earth orbit (LEO) will not be crowded with ever-growing numbers of spacecraft. the project essentially aims to contribute to the creation of a legal framework for space activities by envisioning a regulating entity in space. it will initially phase out and eventually substitute all earth-based spacecraft manufacturing and launching, challenging the negative physical impacts of the anthropocene towards earth and its resources. 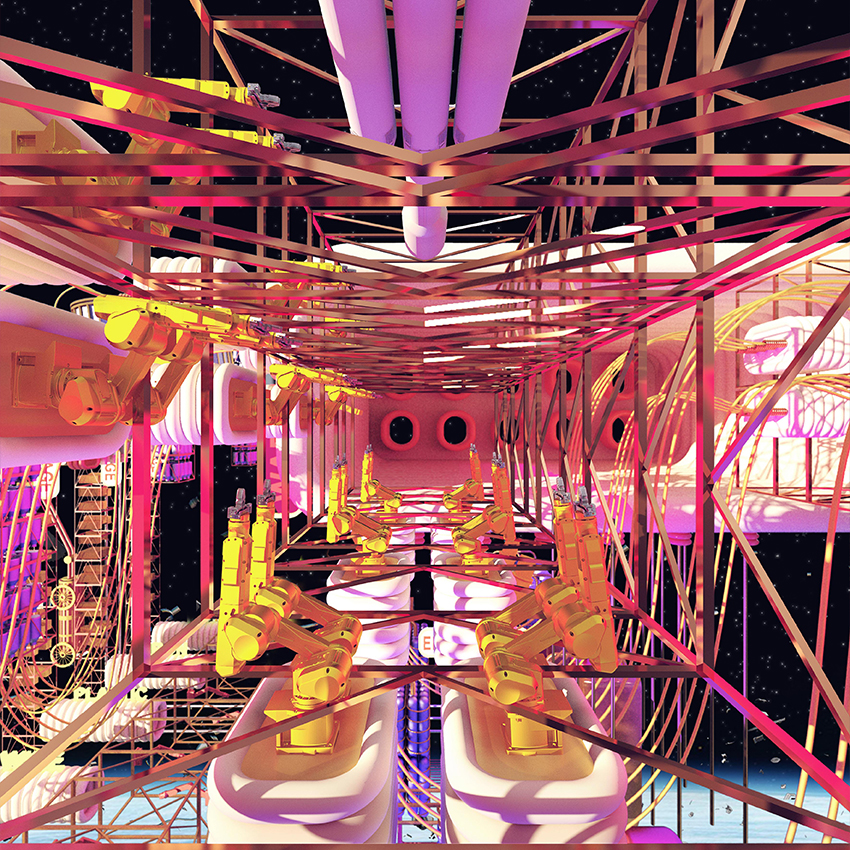 the proposed network will regulate novel space activities such as asteroid mining, by limiting the number and the kind of spacecraft being produced. in this scenario, the ‘node 1’ becomes an independent entity, physically detached from earth, supporting the existing space missions. apart from being a legislative body in space, the spaceport’s main functions include the recycling, manufacturing, maintenance and launching of spacecraft. 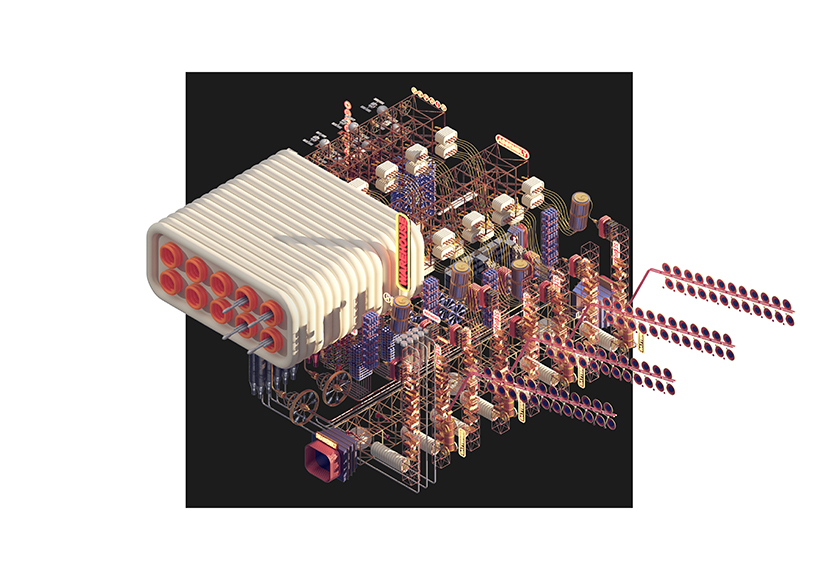 the material and propellant required in the whole system are to be produced in space through asteroid mining, instead of relying on earth for resources. three types of asteroids are mined providing different resources. C-type contains water, which is to be processed into hydrogen and oxygen for fuel. S-type and M-type are iron-rich which can be turned into steel for infrastructure. 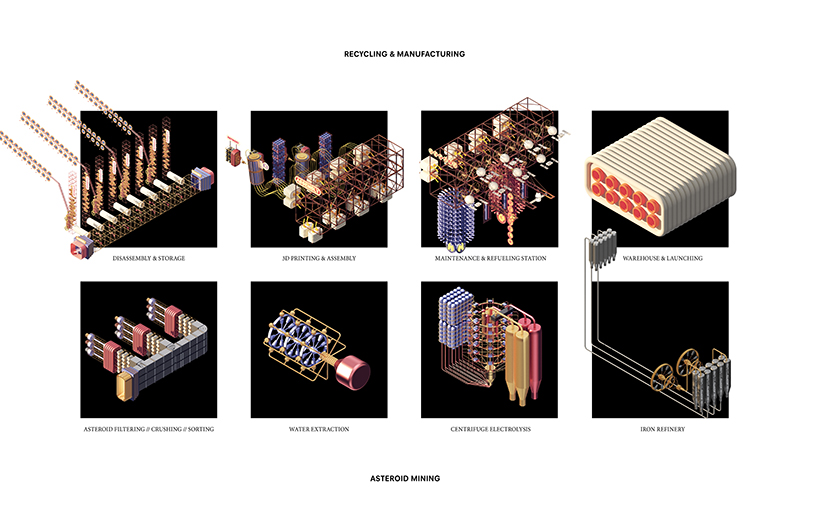 the spaceport constitutes an attempt to effectively manage and reduce the space debris orbiting earth, while aiding existing and future space missions. it provides the necessary infrastructure to recycle and reuse inactive space items, and to transform floating debris into useful spacecraft. in comparison to earth based spaceports, ‘node 1’ spaceport will greatly reduce the amount of fuel required per launch given the lack of atmospheric drag in space. therefore, it serves as the ideal base between earth and interplanetary missions. 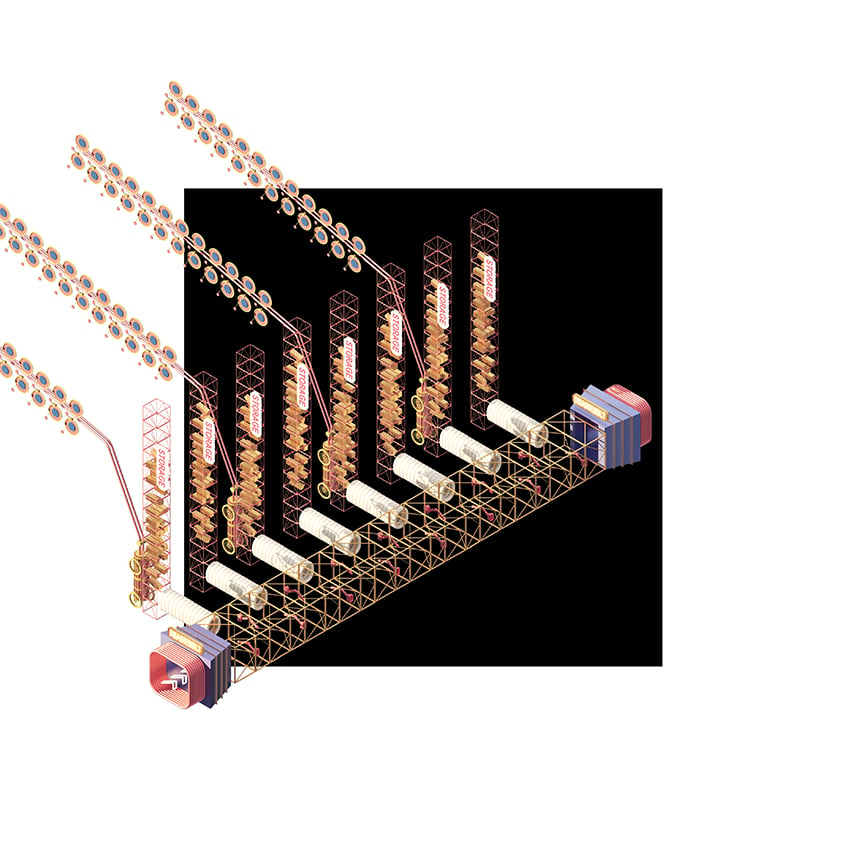 the spaceport is based on the logic of an assembly line, with each component placed in a sequence of production, from docking and sorting to refueling and launching. it is a fully automated system operated by a series of robotic arms capable of performing a variety of tasks. the arms are supported by a truss-like structure which supplies each module with vital energy, materials and data (through a series of cables). overall, the architectural language borrows references from industrial landscapes such as refineries and warehouses, as well as from port cities and data centers. 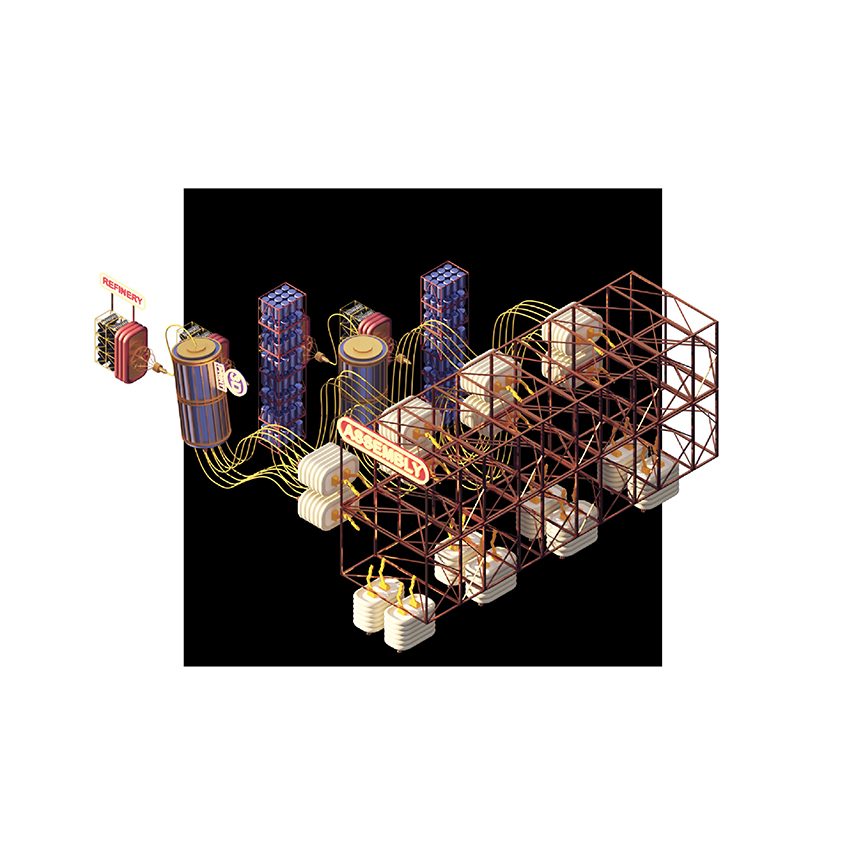 certain elements had to be adapted to a zero-gravity environment such as the electrolysis chamber and metal furnace. these were intentionally designed to create the centrifugal forces required to function in space, though the presence of rotating, circular elements. moreover, the different form of each component highlights its different function within the system. the overall geometry of the spaceport resembles the layout of a computer chip, where the distinct components are organized to work together and to create order in a vacuum. 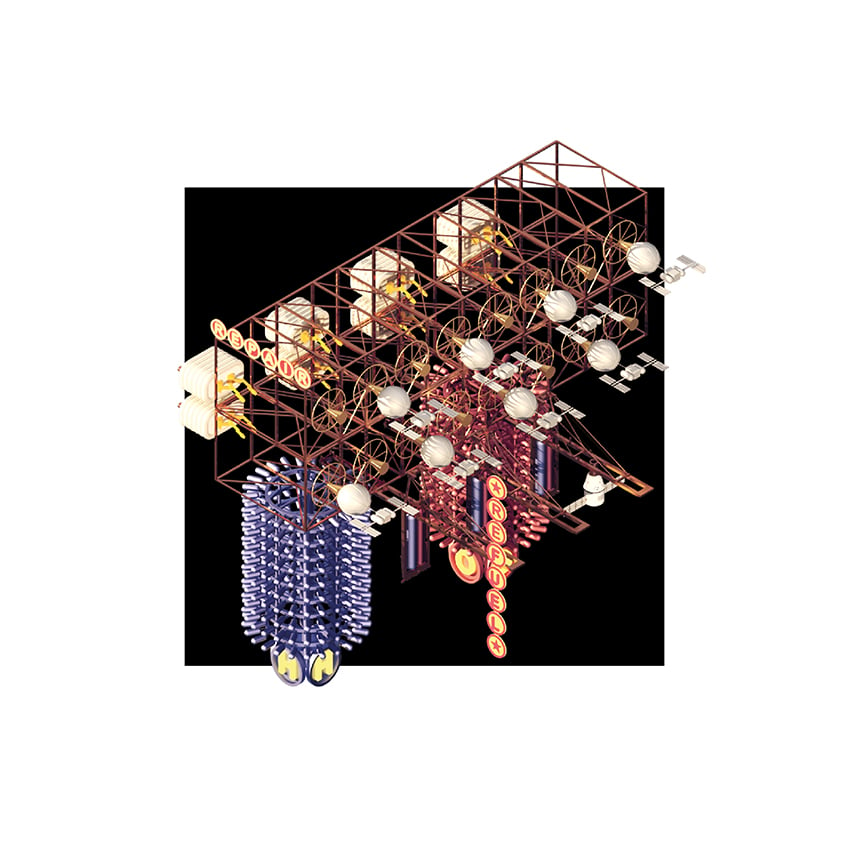 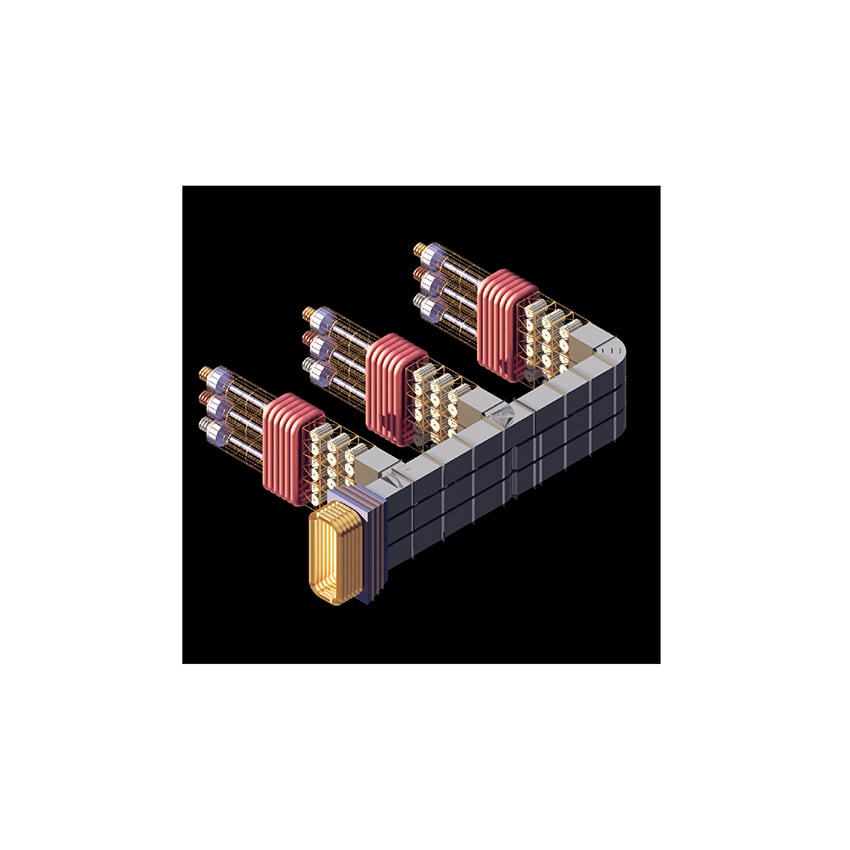 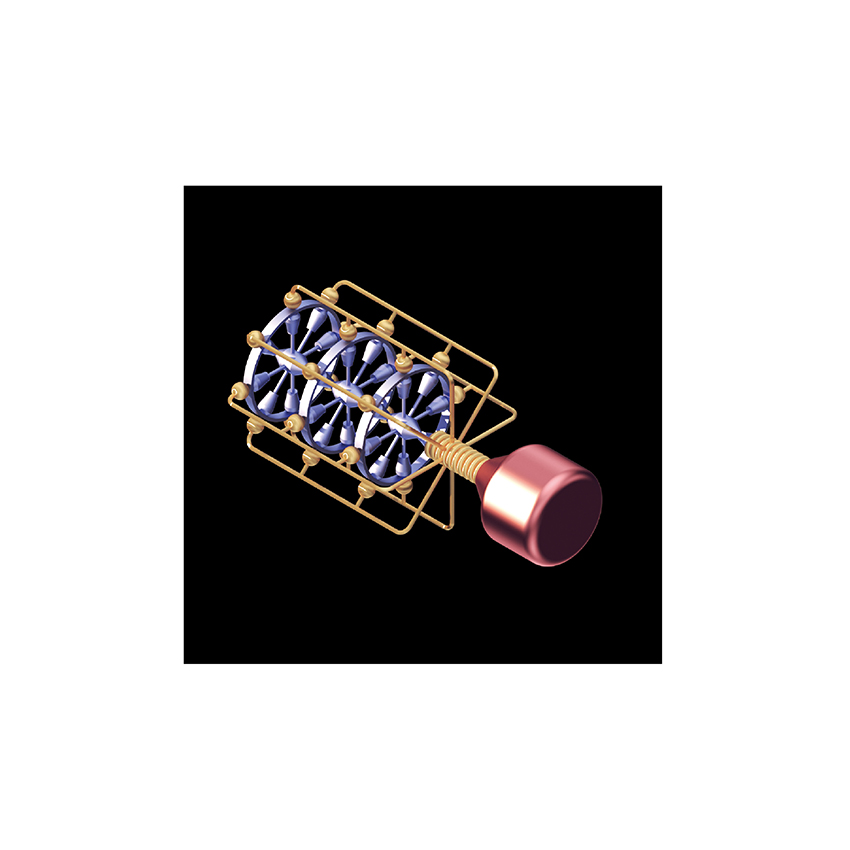 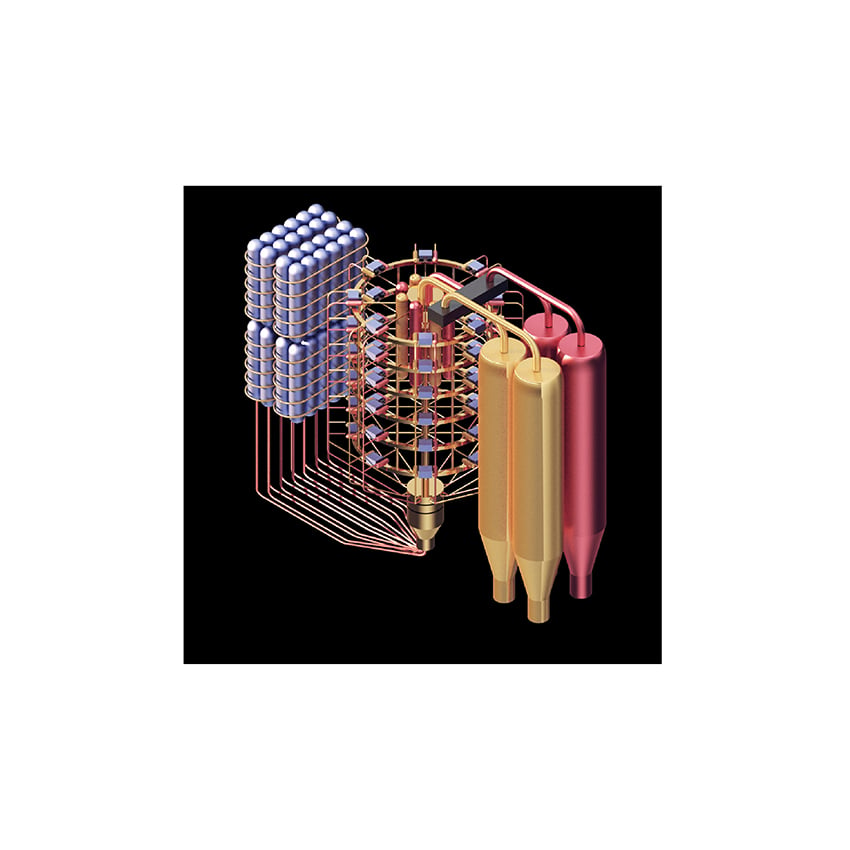 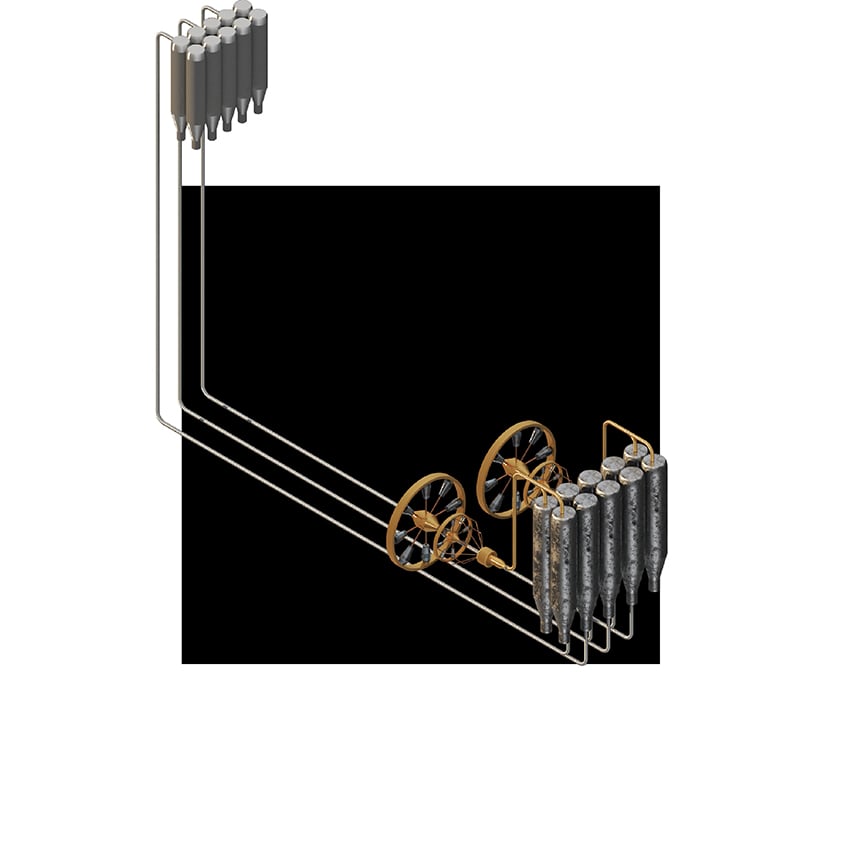