NZI architectes‘ role consisted in the development of the project in montreuil following the design workshops with the inhabitants which were held once every two weeks over five months. increasing the pace was necessary to give concrete answers to the expectations. often avant-garde, the inhabitants were not lacking in imagination. the pedagogical process was indeed necessary in order to correspond all the ambitions with the rules of the professional world, especially in the process of construction where the interlocutors are multiple. 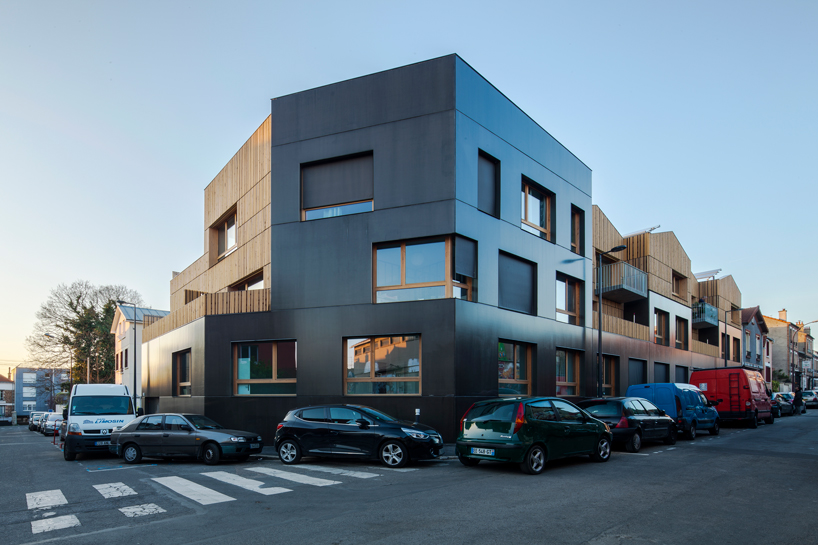 french practice NZI architectes‘ main concern has not been to disappoint the expectations: the adopted strategy aims at the most feasible proposal, leaving more ambitious options temporarily aside. the architects felt it was necessary to announce good surprises rather than failures, both in terms of domestic and external performance. once the building permit was obtained, the inhabitants drew their dwelling with the design team. the role was on counseling, based on personal specifications and compositions of each household. NZI did not impose their vision, the objective being to make their home. 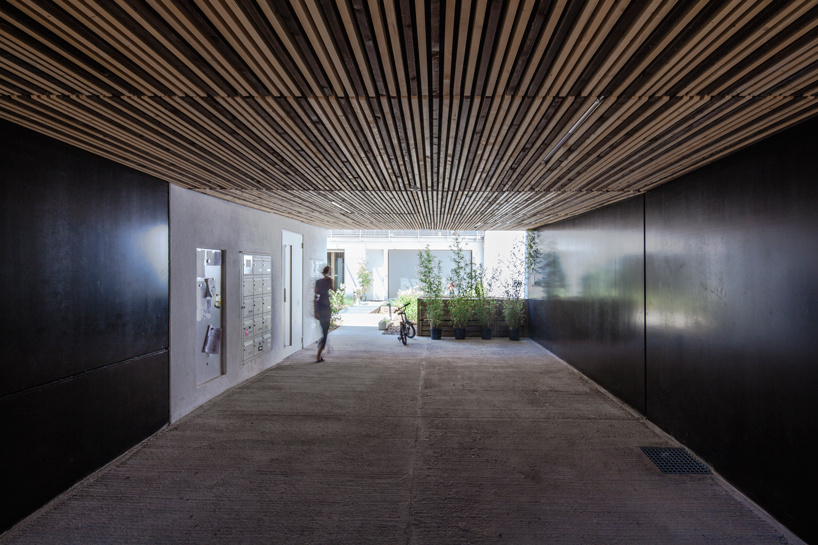 porch accessible to pedestrians and RMCs

beyond the clearly defined areas for the inhabitants in the use of leisure, breathing and comfort in the act of inhabiting, the common circulations represent a real subject of reflection in the practice of housing design. if open-air circulation covers the classic distribution role, the scale NZI architectes have given them leaves room for more spontaneous occupations. a posteriori the youngest inhabitants make a play area and the inhabitants can arrive in front of their accommodation with their own bike. the widths of the corridors are not strictly limited to the regulation but exceed 180 cm in order to offer common terraces in addition to the private extensions of the houses acquired. 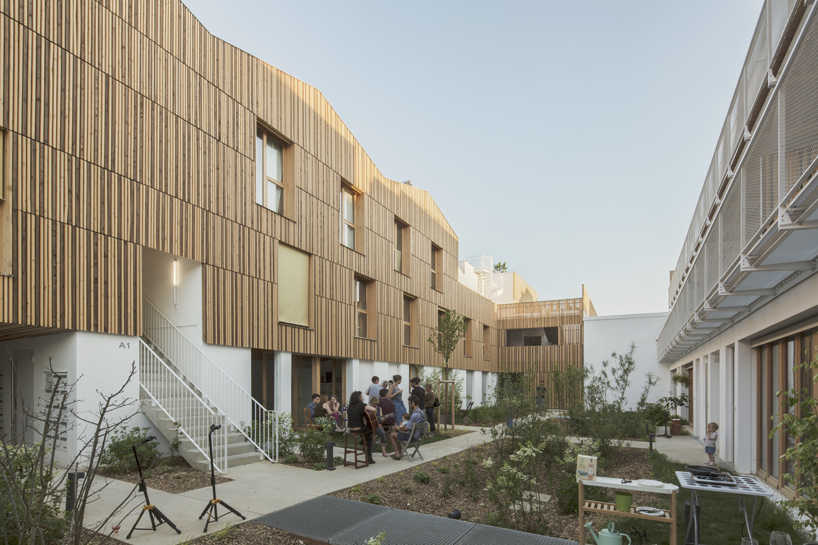 landscape building on the heart of the island

the garden on the ground floor, serves several functions: it is both a pedestrian distribution area, a convivial space and a rain garden for the surface management of rainwater. the distances between the dwellings and the edge of the valley are made by means of massifs of shrubs and grasses. they will form a screen about 80cm high to ensure privacy in the accommodations. the grassed spaces are all collective, but the appropriation of the space in front of the dwellings is expected. in this spirit, there is no adjoining fence between the houses overlooking the collective garden. two valleys run along the northern edge of the pathway, forming a tool for managing rainwater and also the point of composition of the garden. 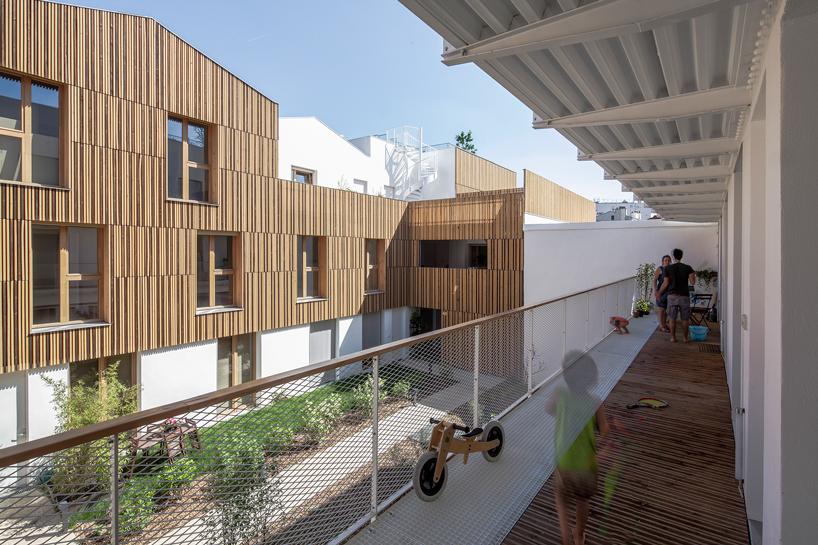 the operation includes two accessible roof gardens: the largest (270m2) is on the courtyard building, the second smaller (90m2) is located at the corner of the building on the street. the functions of these roofs are not deliberately defined to allow a subsequent appropriation by the inhabitants. however, the roofs are equipped with a complex of culture of 80cm of thickness whose composition is optimal for the vegetable production (soil modified in compost and sand). 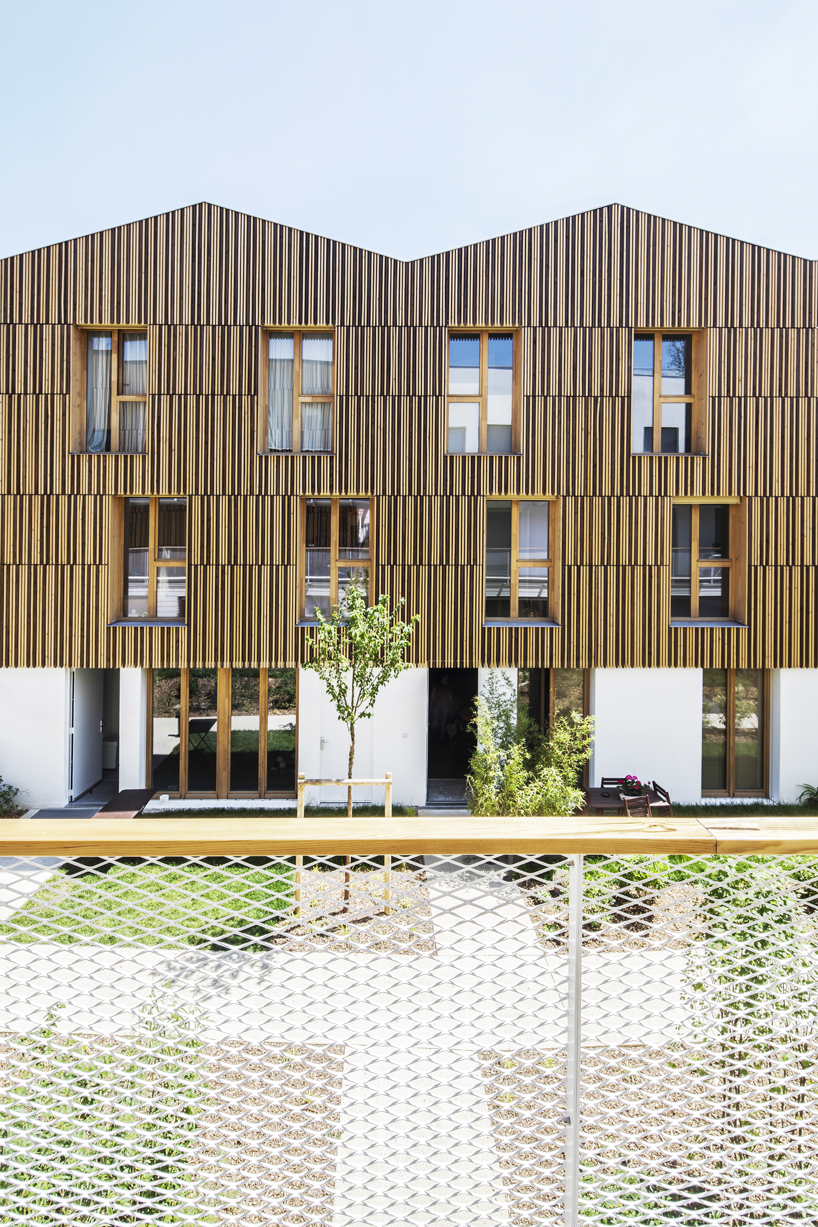 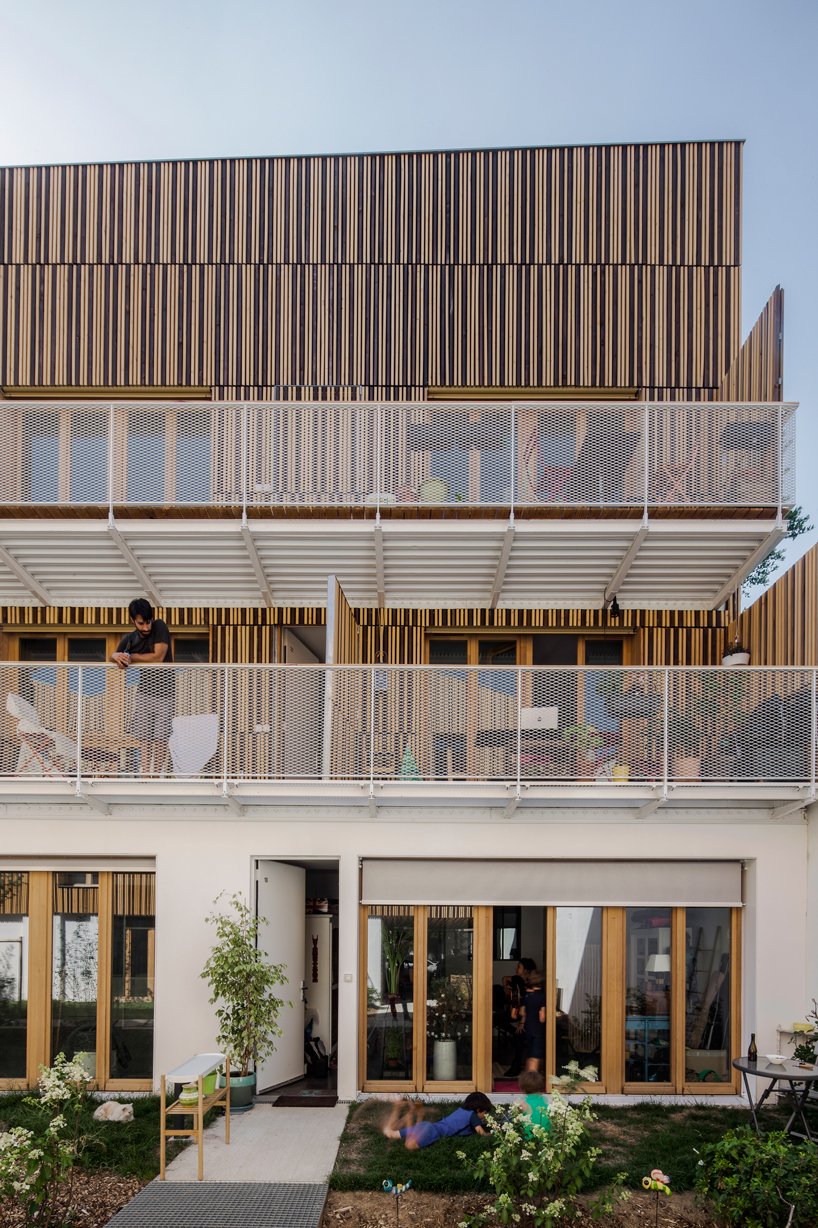 the interior garden is open to everyone 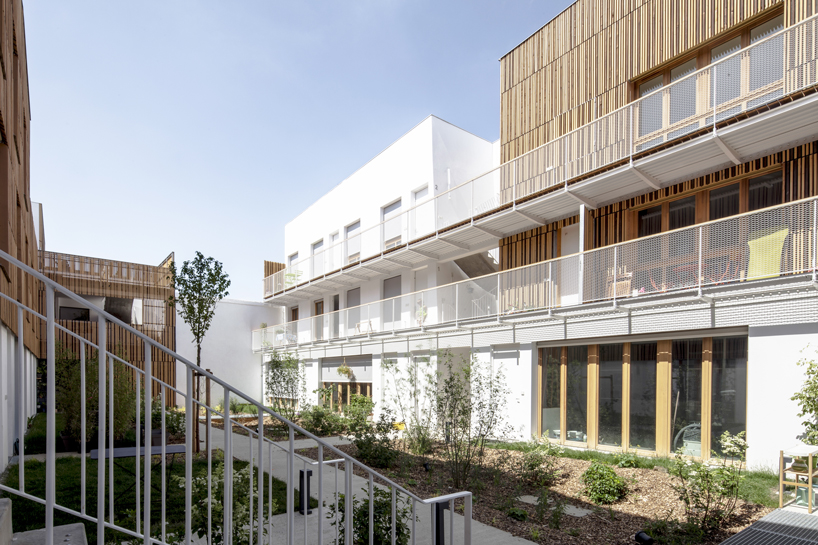 the interior garden, without private fences, offers an additional shared space for the inhabitants 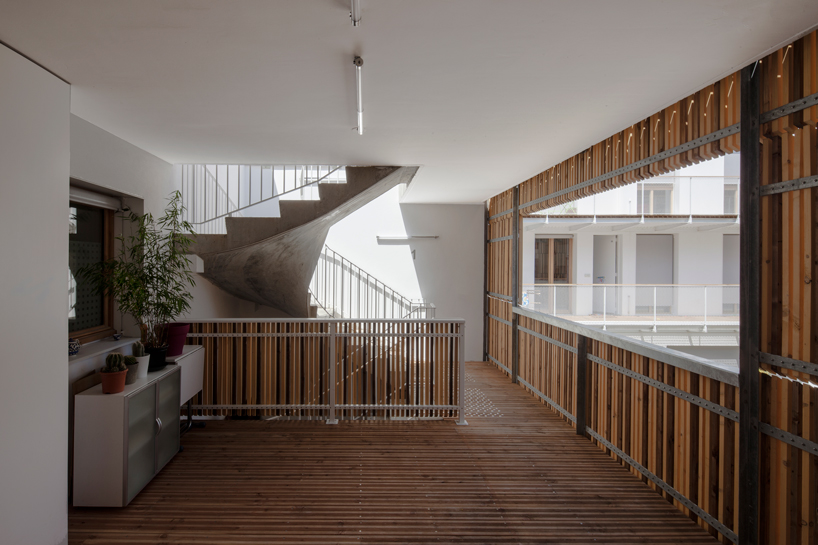 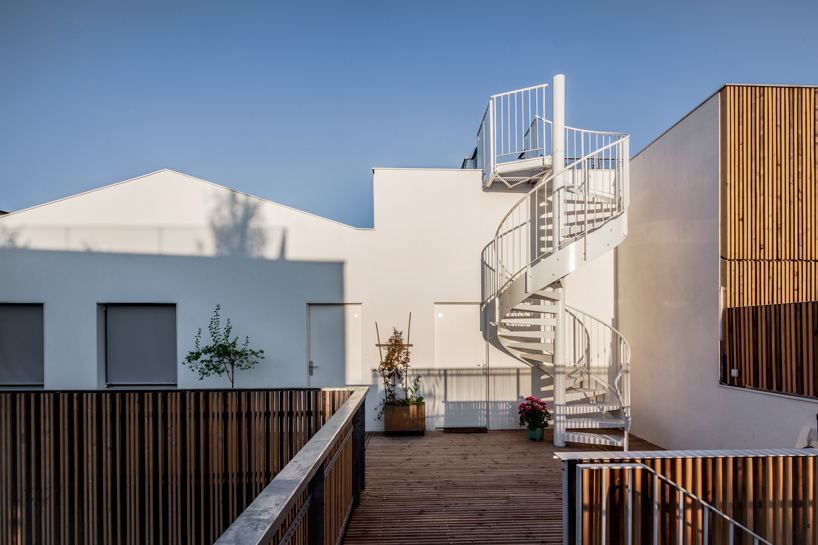 in addition to the terraced roofs, the corridors are also shared places 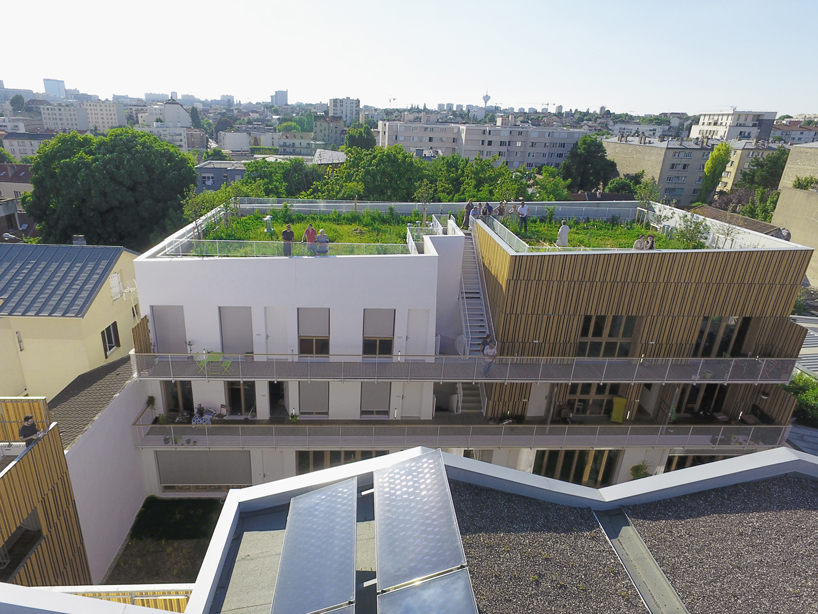 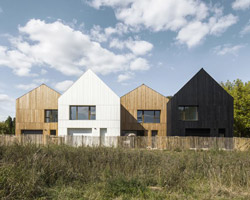 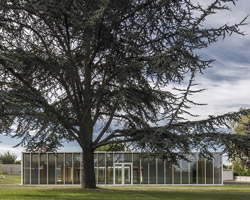 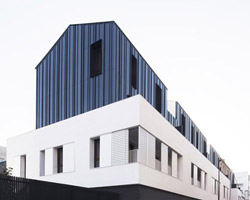