in karuizawa, japan, OFDA associates has built a built a megaphone shaped vacation home with the intent of concealing views of neighbouring houses. the home, called ‘the karuizawa tunnel’, is comprised of a central living area bracketed on either side by individual rooms. bordered on the east and west by neighbouring villas and to the north by the local train station, the property takes the inspiration for its shape from the inter-dimensional well in the haruki murakami novel, ‘the wind up bird chronicle’ — a passage that join two worlds. 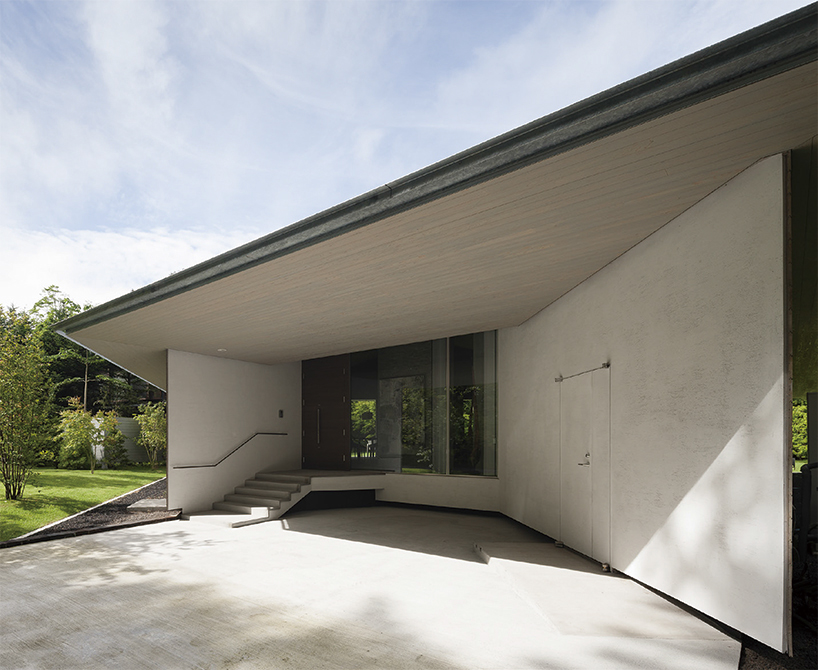 the home is entered from its north side, and slowly opens up to accommodate the generous view of its south facing façade. OFDA envisions the shape as a tunnel, guiding residents from one world to another. ‘I was influenced by sculptures, paintings, and novels in which I sensed similar motifs,’ explains taku sakushi, the architect. ‘one of them was a novel by haruki murakami. in his early works, stories developed inside his closed world, but in later novels, various holes were created in his world to establish connections with other worlds. a symbolic case is a well in the wind-up bird chronicle. it functions as a transporter, with which the main character moves from the world he lives to a different world.’ 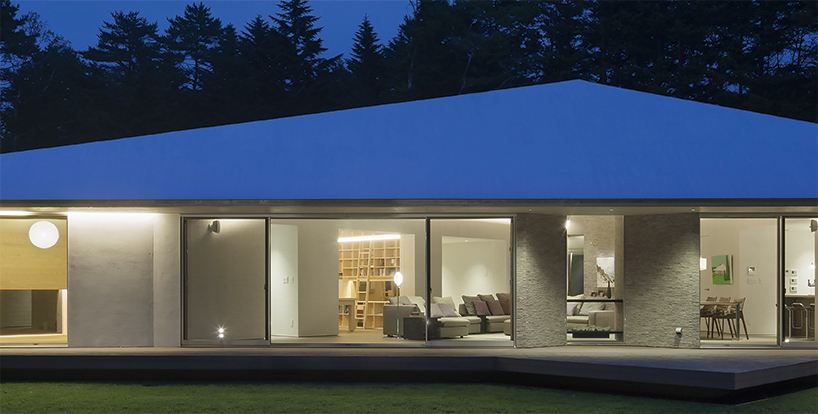 the home is entered from the north, and slowly opens up to accommodate the uninterrupted views of its south façade

a large central living room takes up much of the tunnel’s main passage, with a master bedroom, den and two japanese style rooms leading off it. sharing the space of the living area is a dining room, which graduates into a kitchen and pantry area. the megaphone shape is completed by a broad south facing terrace that takes in uninterrupted views of the countryside. floor to ceiling glass panelling delivers sunlight into the space, with a multifaceted pointed ceiling continuing the cave like concept. 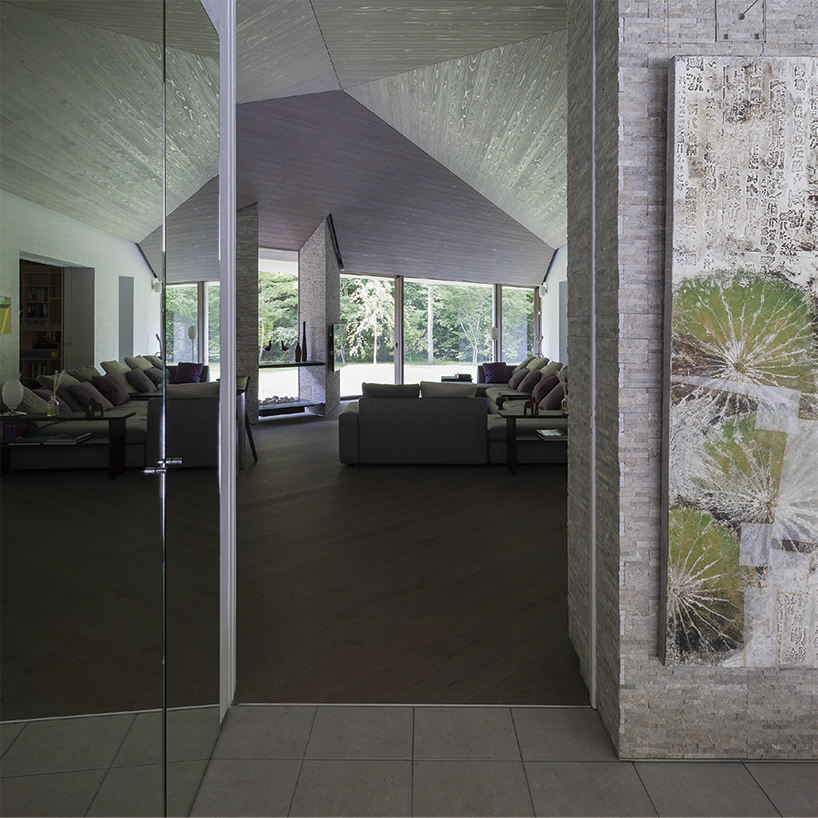 ‘in this project, I was thinking about creating a big frame – in this case, a tunnel-like structure – that goes from an entrance on the north side with a big roof, to the opening in the south facing greenery,’ continues OFDA. ‘this tunnel is just like the well in murakami’s novel, a transporter to take the residents to a nature-filled world when they arrive from the city.’ 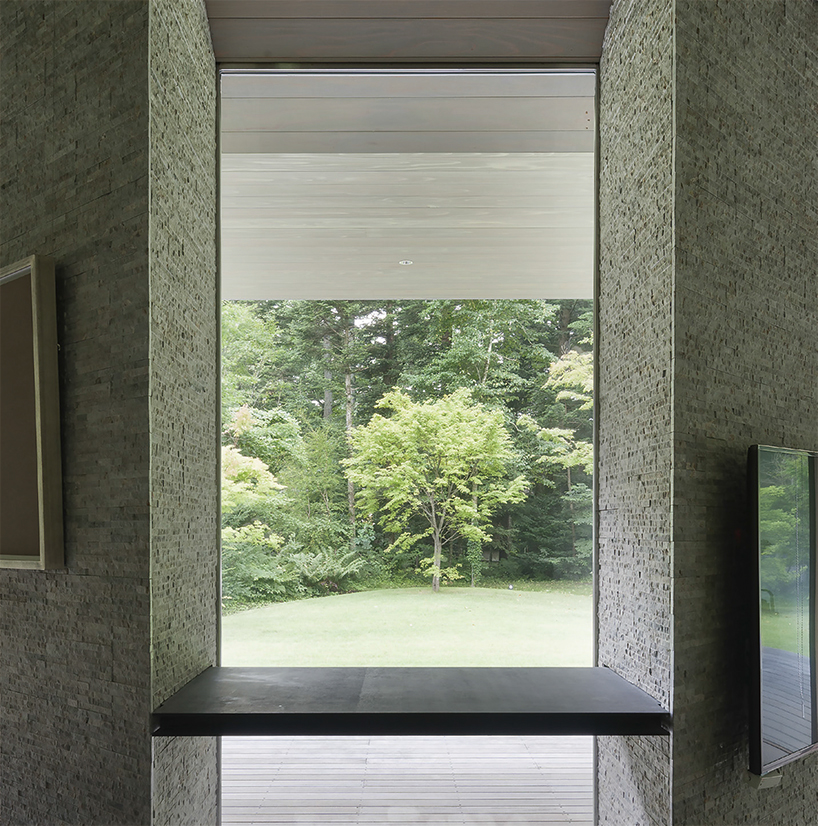 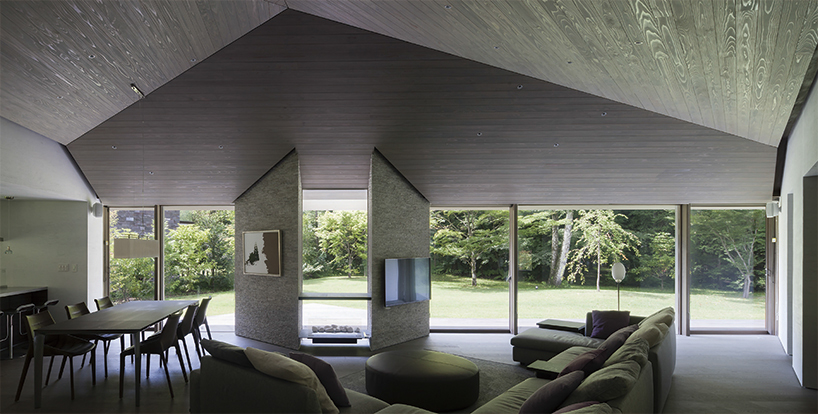 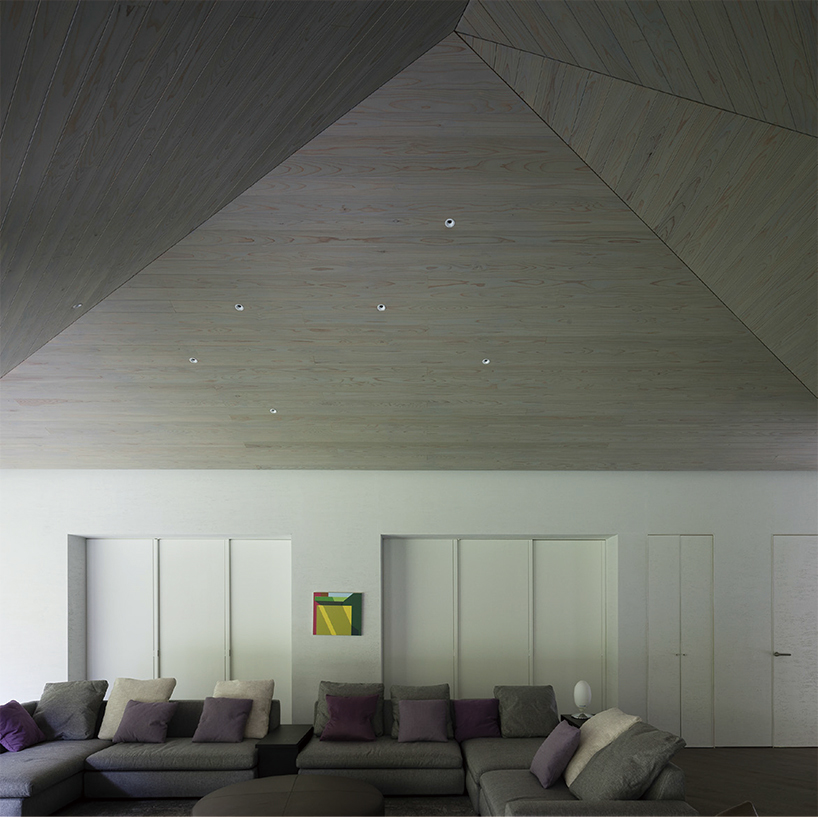 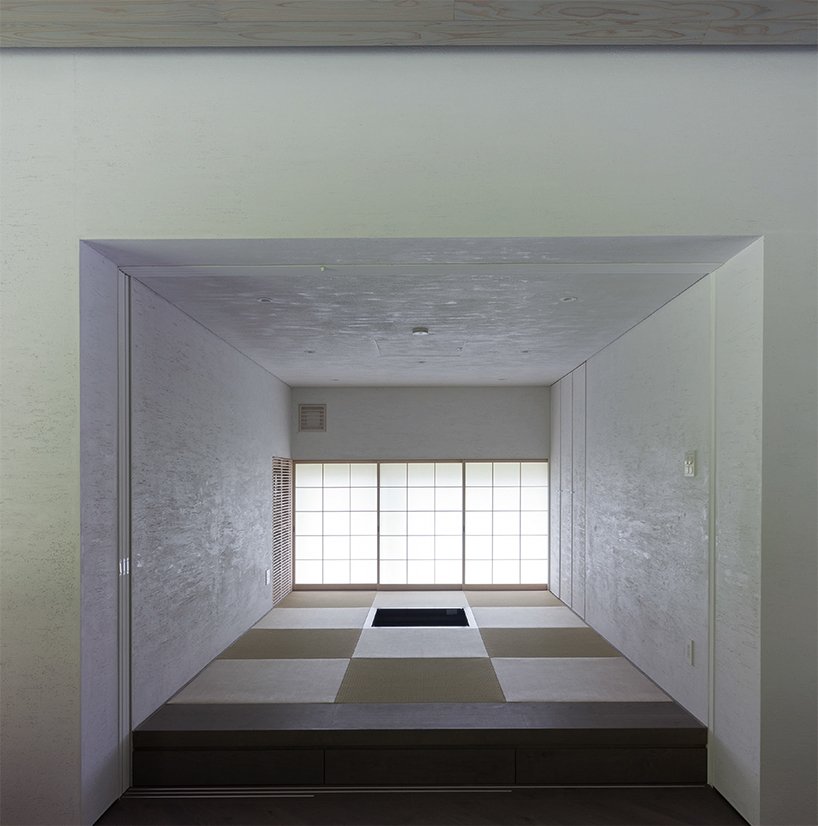 the design of the house is inspired by an inter-dimensional well from the novel ‘the wind up bird chronicle’. 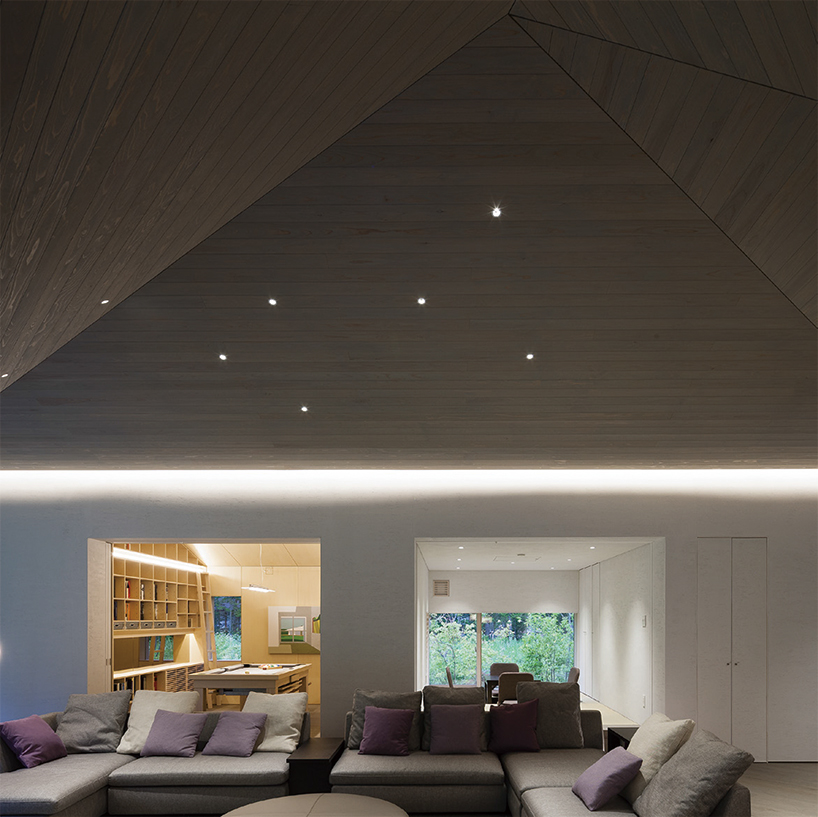 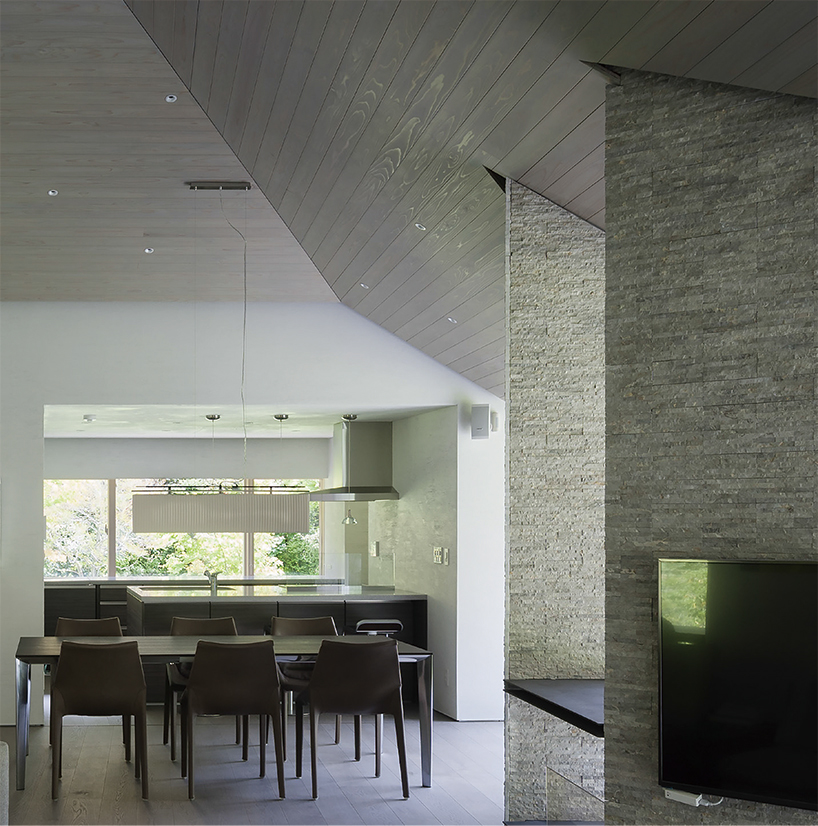 to its east, the passage graduates in a dining room, kitchen and pantry 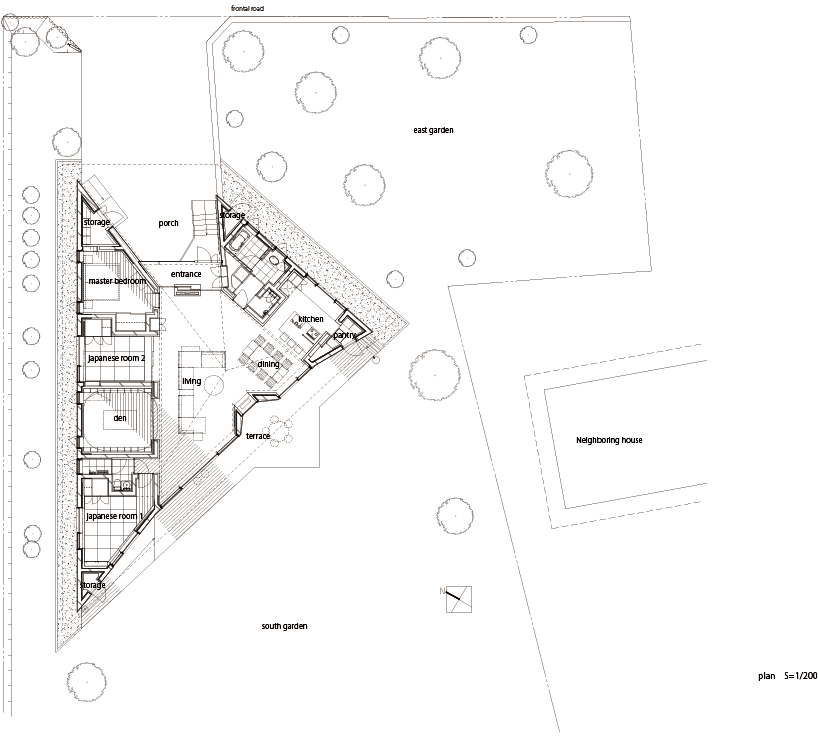 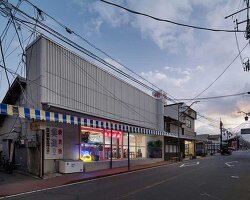 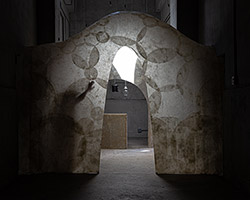 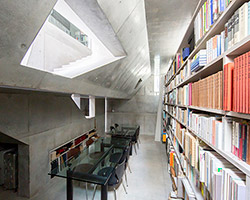 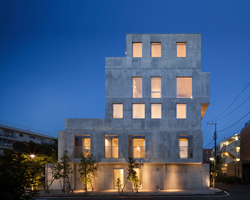 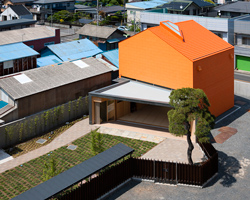