office kersten geers david van severen and bas princen has been awarded the silver lion for the most promising young participant of the exhibition ‘people meet in architecture’ at the 12th venice architecture biennale, curated by kazuyo sejima. their joint project ‘garden pavilion (7 rooms / 21 perspectives)’ can be seen in the palazzo delle esposizioni (images) and in the garden of the arsenale space. 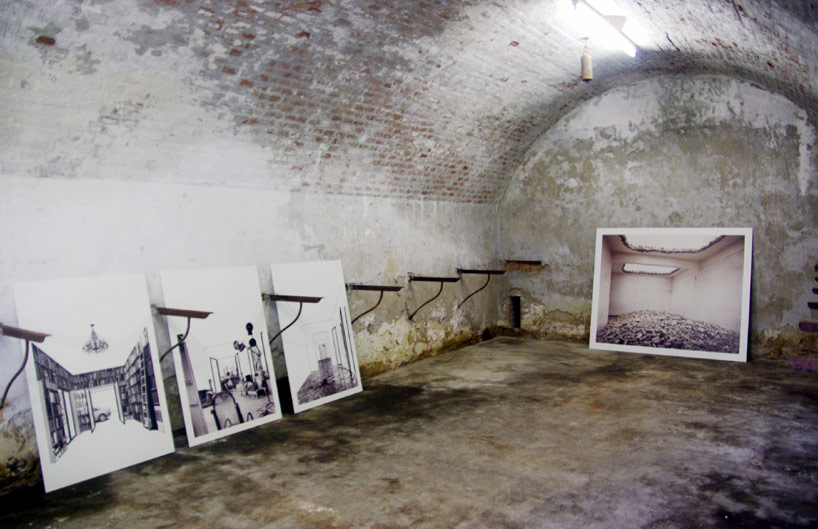 the photographs taken by bas princen show existing forms of anonymous space and architecture; the images made by office kersten geers david van severen are fictitious views of their architecture designs. they seem to move in opposite directions: the perspectives of princen long for authorship and particularity; the perspectives of office want to shed their artifice as a layer of skin. this division, however, is false, as both sorts of perspectives simply want to show places where people can exist by being confronted with their own existence. the means with which these perspectives and these forms of architecture are made show a striking resemblance.

what is important here is that nature and culture, or chaos and architecture, are not considered enemies. rather, the opposite is true. massive walls, high columns, plane roofs, large squares, and perpendicular openings draw lines and impose borders. trees, debris, water surfaces, rubble, clouds, and the sky – but also human beings, cars, books, artifacts, and furniture – impose themselves as messengers and signs of the endless warehouse of our globalized world. they need each other in order to exist, and they can only be real and meaningful if they are granted to be what they are.

— office kersten geers david van severen were responsible for the content of the belgian pavilion at the eleventh international architecture in venice in 2008, whose artistic director was the american aaron betsky and whose theme was ‘out there. architecture beyond building’.