the office for metropolitan architecture (OMA) has unveiled the firm’s conceptual masterplan for a major new arts district in hong kong. one of three competing proposals, the design of the 40 hectare waterfront site would incorporate three urban villages into an authentic environment embedded in a new public park, the largest green space in hong kong.

‘using the village – a typology every citizen of hong kong is familiar with – as the model for our plan allows up to absorb the massive scale of the west kowloon cultural district (WKCD)’s ambition into manageable portions and forge deep connections with kowloon, whose vital urban energy will be the lifeblood of WKCD.’ -rem koolhaas 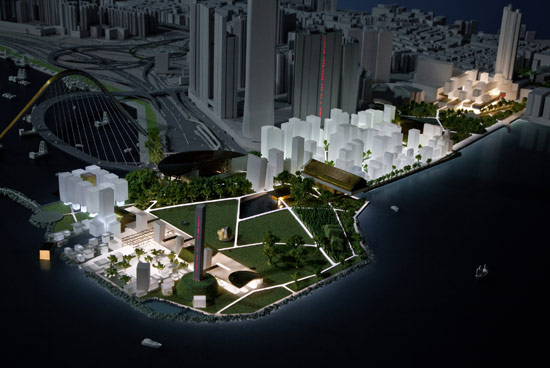 divided into the east, middle, and west, the three villages all emphasis a vibrant street life. they each aim to nurture all aspects of the creative process by making them visible elements in the district.

the ‘east village’ features ‘M+’, an experimental new museum interpreted as a barcode of overlapping bands featuring visual art, film, design and popular culture. other facilities embedded in ‘M+’ is an ‘art factory’, where education, artist studios, a hotel and shops intersect and interact with the museum itself. beneath the museum, an exhibition centre is a venue for auctions and conventions. ‘M+’ links to kowloon park and the by a series of pedestrian bridges.

the focal point of the ‘west village’ is a network of four interconnected performance spaces under the common umbrella of the ‘universal theatre’. offering views over the harbour and waterfront, the collective network includes a chamber music theatre, street theatre, grand theatre and a concert hall. each venue is embedded in a single, continuous outdoor lobby stretching the length of the village. 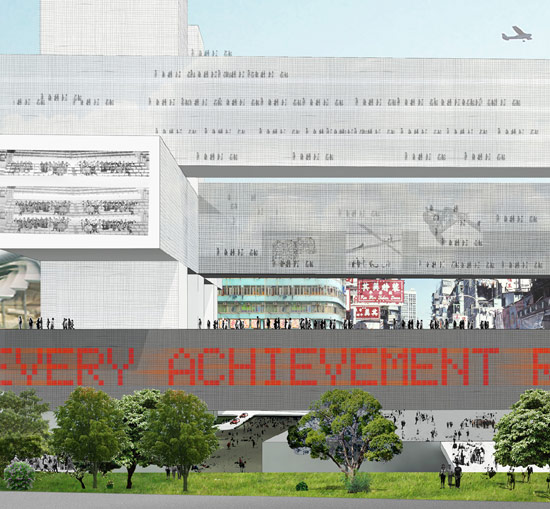 transparency of ‘M+’ with kowloon in the back

OMA’s conceptual masterplan will be discussed in a series of public forums in the next three months. the project is also on display in exhibitions across hong kong as well as the international architecture biennale in venice from the 29th of august until the 21st of november.