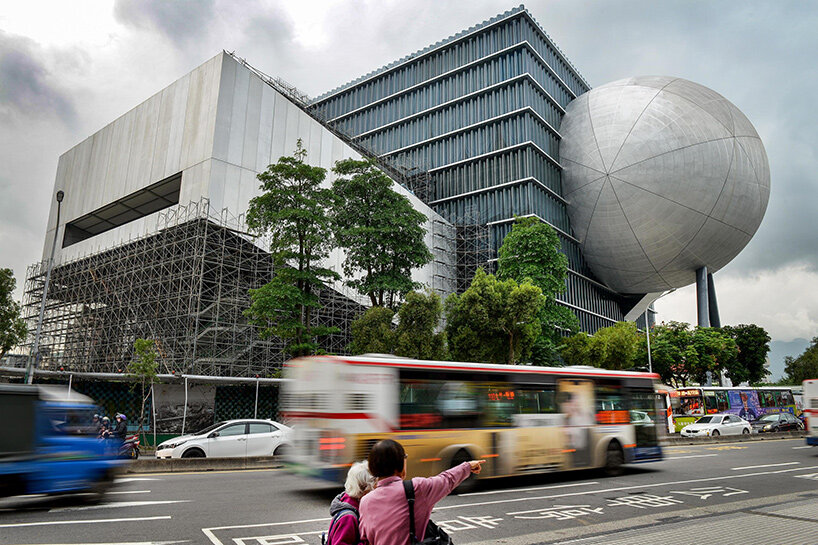 the taipei Performing Arts Centre sits amid the city’s shilin night market. lifted off the ground, so that street life spills beneath the structure, the glass-walled central cube appears light and airy

in his early 20th century writings, the poet-architect, paul scheerbart, forecasted extravagant forms of glazed architecture that broke free from the emerging modernist mold. he imagined something futuristic and fantastical – decorating our metropolizes with tantalizingly tilting, kaleidoscopic color rather than the sober-hued vertical planes we have come to know. his architectural collaborator, taut, attempted to realize some of his imaginings in his 1914 glass pavilion at the werkbund exhibition in cologne. ‘when there is more glass everywhere,’ scheerbart wrote, ‘fireworks will be transformed; thousands of reflection effects will be possible.’

as glass continually evolves its role in architecture, scheerbart’s philosophy and foresight into the potential of glazing is often explored and wondered at. prescient though he was, he couldn’t, however, predict the technological advancements that would turn glass into a material with the strength of concrete, the sculptability of clay, the shielding powers of far more opaque matter, and color options in the thousands. the cube’s corrugated glass shroud is made from vast sections of highly technical S cross-section glass, built from PVB layers that equip it with solar protection and a ‘shale grey’ tint

reflecting the considerable advancements, the biannual vanceva world of color awards (WOCA), most recently in 2020, seeks to highlight the chromatic and technical potential of glass in contemporary architecture. vanceva has been manufacturing colored glass interlayers since the 1980s and is part of the eastman brand portfolio. its color palette for translucent, transparent and solid glass is now the largest in the world – 17,000 shades to be precise. it knows a thing or two about color and glass.

‘when there is more glass everywhere,’ scheerbart wrote, ‘fireworks will be transformed; thousands of reflection effects will be possible’

vanceva’s colored PVB interlayers can be teamed and tempered with other interlayers offering functions such as strength, solar/UV control, or sound control, in order to supply super-powered glazing to the designs of world-class architects. entries in the color awards are judged on the creative use of vanceva’s colored interlayers and how much attention is given to the overall benefits and technology of the glass. 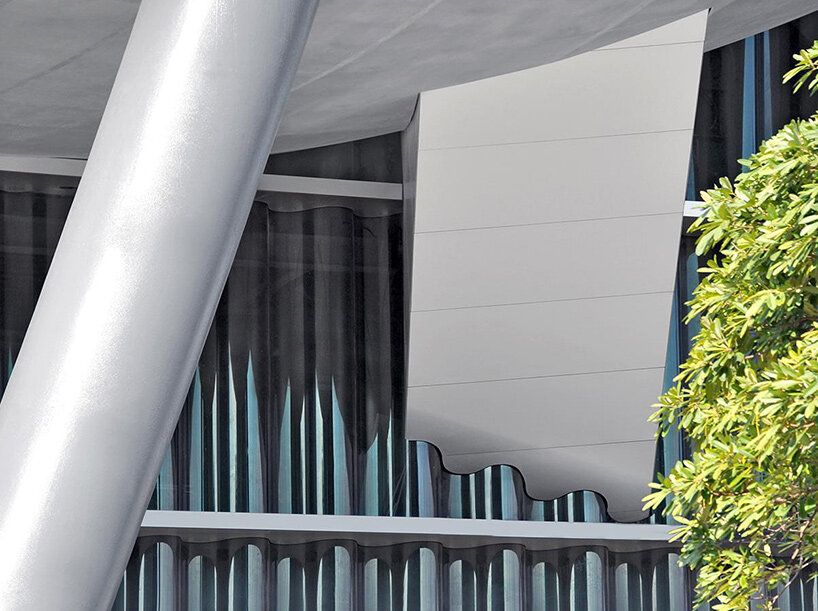 there’s drama on the outside of the theater complex too, created by the textural play between the aluminum of the theatres’ cladding and supports and the rippling glass, which changes with the light

the taipei performing arts centre (TPAC) by architectural supremo rem koolhaas and his studio OMA, completed in 2019, was among the awards’ honorable mentions. while some entries displayed the sort of dazzling chromatics that would set scheerbart’s heart racing, others such as this, and the winning edifice, steven holl’s kinder building, were celebrated by the elite panel of judges for more nuanced incorporation of color.

the ambitious architecture of TPAC fuses three distinct theaters around a central cube providing all manner of backstage functionality. challenging deeply rooted convention, the project responds practically to the fact that contemporary theater and performance often takes place outside the spaces designed for them. the proscenium playhouse is a sphere resembling a planet latched onto the side while the grand theater and multiform theater are block compositions that lock into the cube. the fourth, ‘super theater’ is a combination of the grand and multiform spaces, and allows for the creation of a 100-meter stage, should it be required.

the connector cube is shrouded in a corrugated glass façade formed from 5-meter-high segments manufactured by cricursa. the vanceva interlayer is a PVB in shale grey from its earth tones collection. the stormy shade ties it in tonally to the aluminum-clad auditorium structures providing remarkable uniformity through the different materials of the structure; the glass blends in with the whole but allows UV filtered light through. 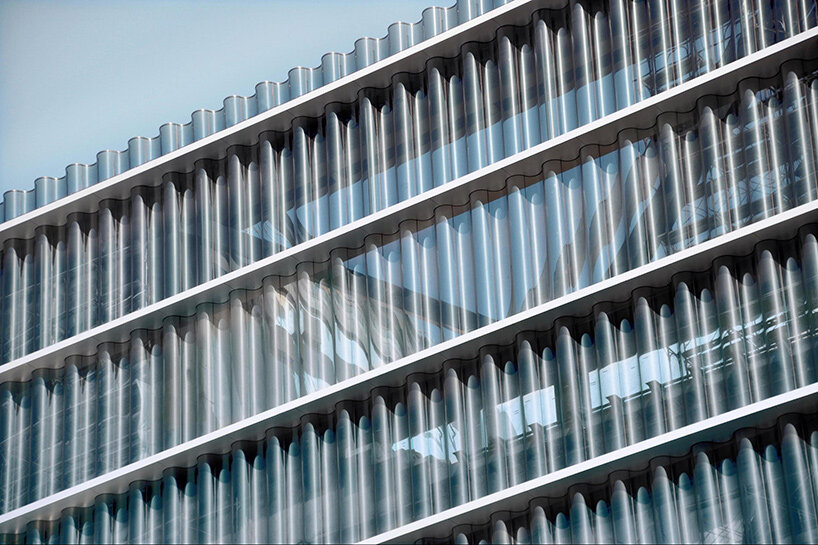 by night, light shines through the glass wall, opening up the inside of the building to the outside. by day, the wavy glass walls create a watery surface with distorted reflections

‘through vanceva interlayers, there is a clear visibility to the outside while maintaining UV protection and thermal control.’ details WOCA juror ammar al assam, ‘the large-format glass panes in s-curved cross-sections allow for less visual obstruction from structural elements. the curvy surface also generates playful, distorted reflections, inviting users to the space for an amusing and/or inspiring interaction with the façade.’

while the prismatic iridescence of scheerbart’s dreams may be imagined to hijack attention, TPAC demonstrates how, when used monochromatically with carefully compiled tone and finish, colored glass can hold a different sort of power, adding tantalizing new translucent textures to the fabric of our cities.