an ‘invisible’ volume reflects local heritage atop a hill

Hidden among Tangkou’s natural landscape with its curving mirrored facade, Tangkou Coffee Studio by One Take Architects marks a fusion of the Chinese village’s past and future — reflecting its modern, optimistic future as well as its rich cultural heritage. Marked by a prominent arching orange entrance like an ‘eternal flame in the mountains’, the minimalist café workshop overlooks the idyllic Huangshan Mountains. The sculptural structure is composed of two delicately sweeping walls that unite at a point that forms a cross, reflecting the town’s religious values.

At the same time, the studio welcomes young locals of the future generation to learn coffee preparation skills to support their livelihood, while paying tribute to the town’s rich history — notably the nearby girls’ school and hospital which were inaugurated in 1910 by Dr. Mabel Pantin who pioneered Western medicine in the region. 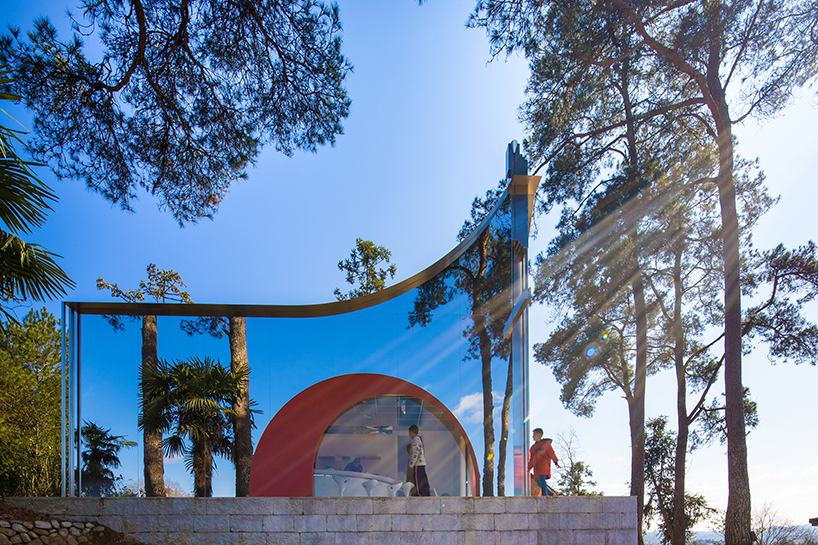 The team at One Take Architects completes the coffee shop with an ambiguous mirrored facade which discreetly melds in with its natural surroundings, and like a floating illusion, quietly reflects the passage of time. The form is composed of two French window arcs that sweep in delicate motion and create the illusion of thick walls that recall the colors of the interiors in the former Mother’s and Children’s Hospital.

Two separate lines of vision further gather the two adjacent facades which together with the horizontal drainage elements reflect a complete Latin Cross emerging from the expanses of mirror. From certain perspectives, the hidden cross appears to echo the red cross crowning the church down the hill. At night, the result is a floating Latin Cross of light, celebrating the area’s embedded faith and introducing a new luminous monument in mountains for the villagers who will view it from afar.

Inside the Tangkou Coffee Studio, the architects restored the structure’s previous wooden interiors with refreshed finishes. Facing the open view of the mountains, the central semi-circular bar serves as the workspace for selecting and roasting coffee beans and making coffee. 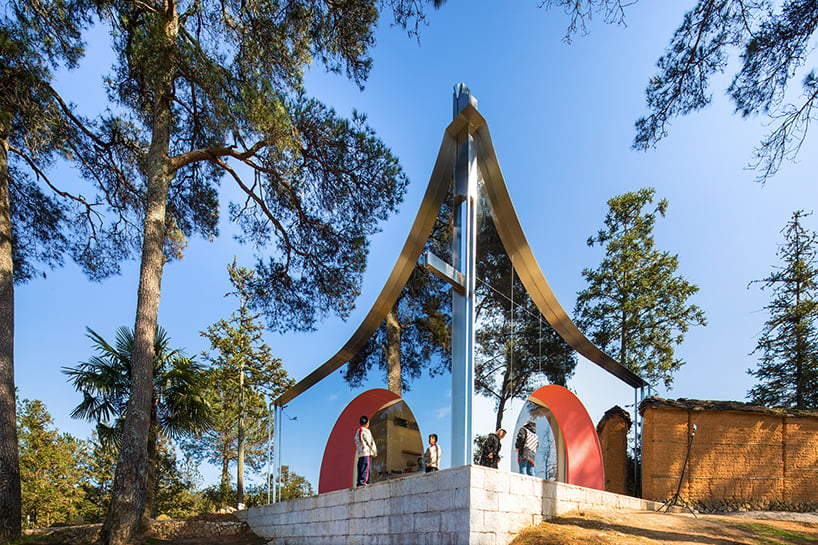 sweeping mirrored facades conceal the structure amid the landscape

The coffee shop sits close to the Shuhua Girls’ School and Women’s and Tangkou Children’s Hospital which was built in 1910 by Dr. Mabel Pantin, a British Church doctor who also pioneered Western medicine in Tangkou. During the Second Sino-Japanese War, the complex was requisitioned as a military site. Since then, though the buildings have sat inactive for many years, they have been preserved due to their cultural heritage and vital importance to the collective memory of the Tangkou area.

Attracted by the rich culture of the city, the owner of Tangkou Coffee Studio decided to move out to the city and initiated a restoration of the complex alongside the new the Mabel Pantin Art Gallery.  One Take Architects revitalized the existing structure, which now operates as a cultural coffee studio with the neighboring village of Longtan. 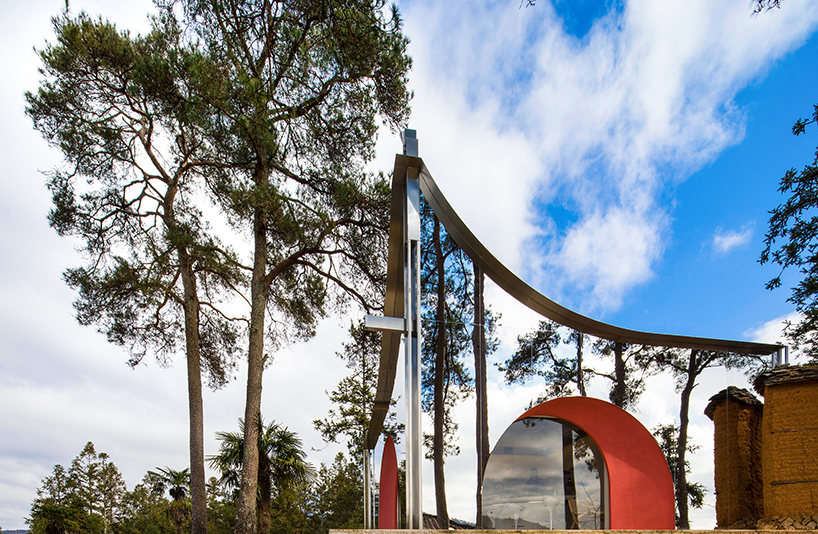 the facade culminates with a subtle cross, alluding to the town’s religious values 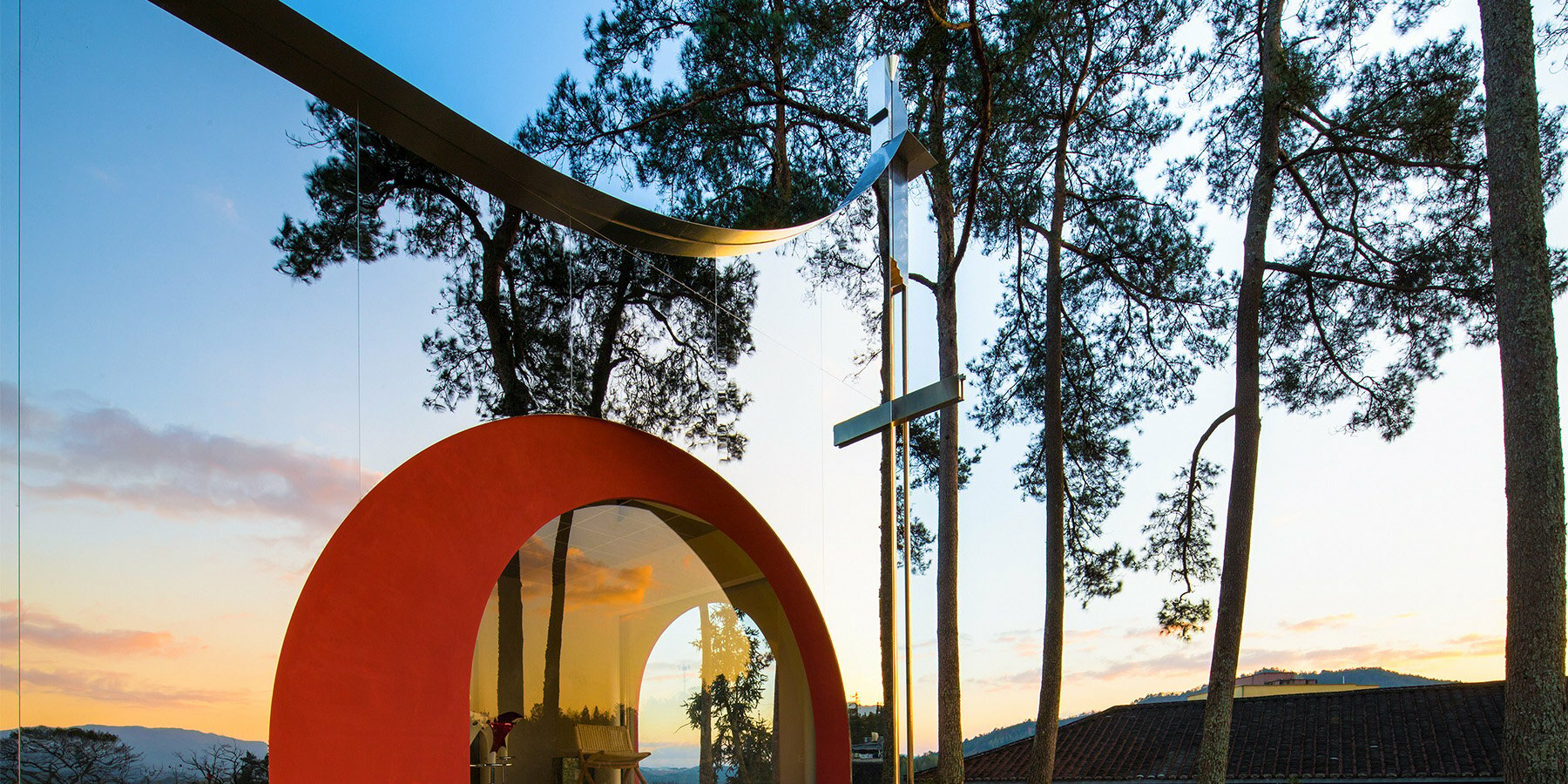 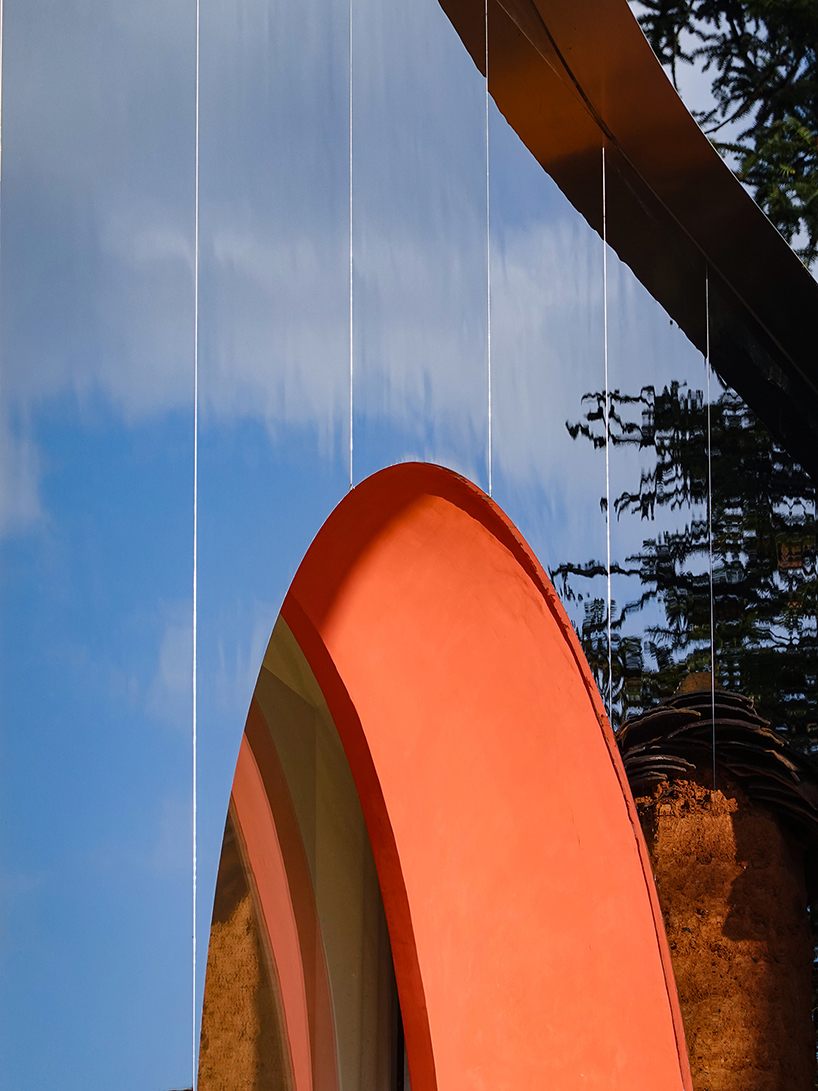 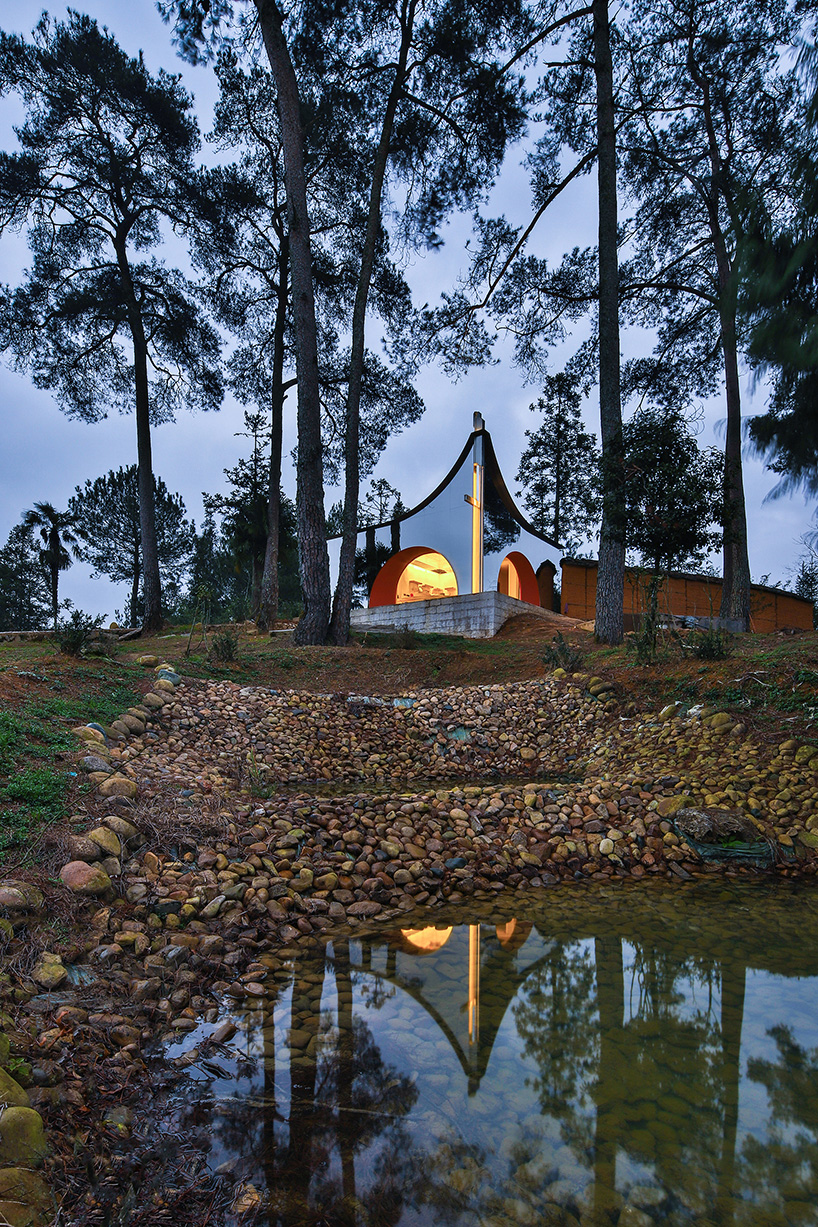 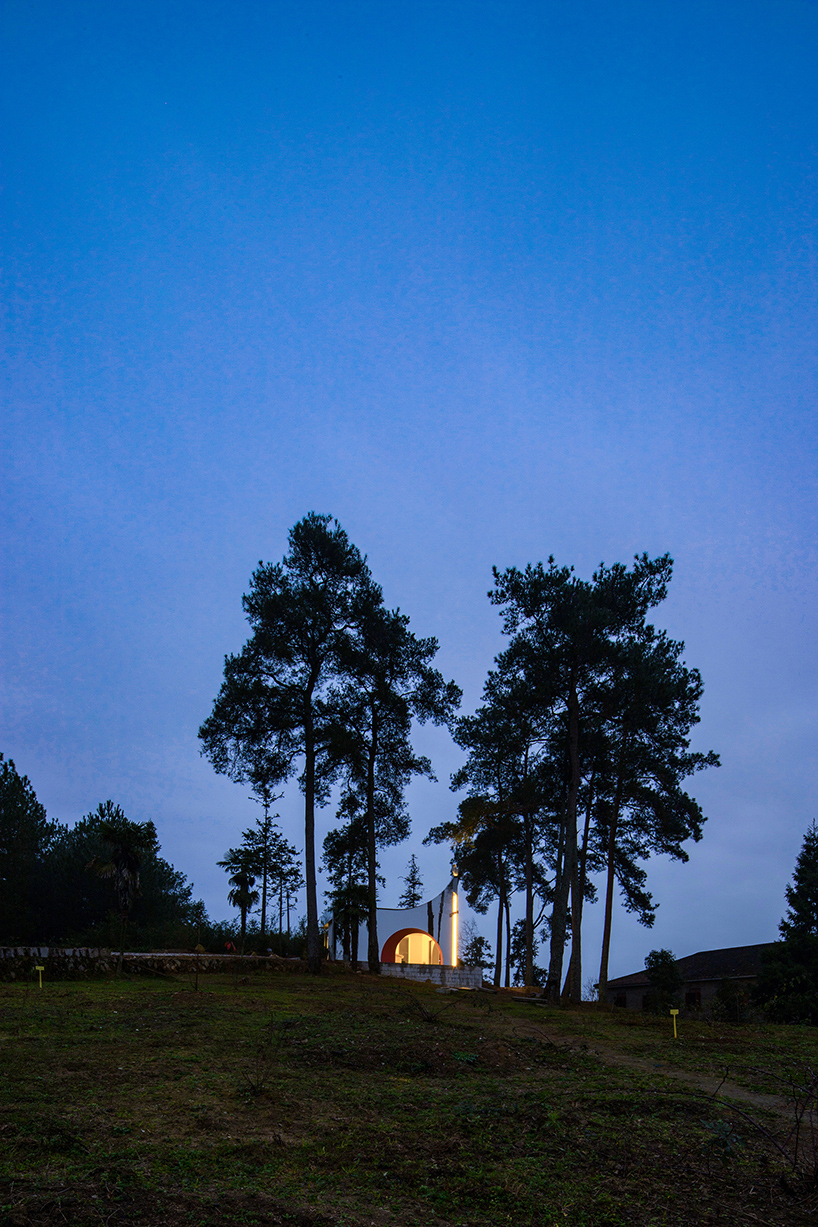 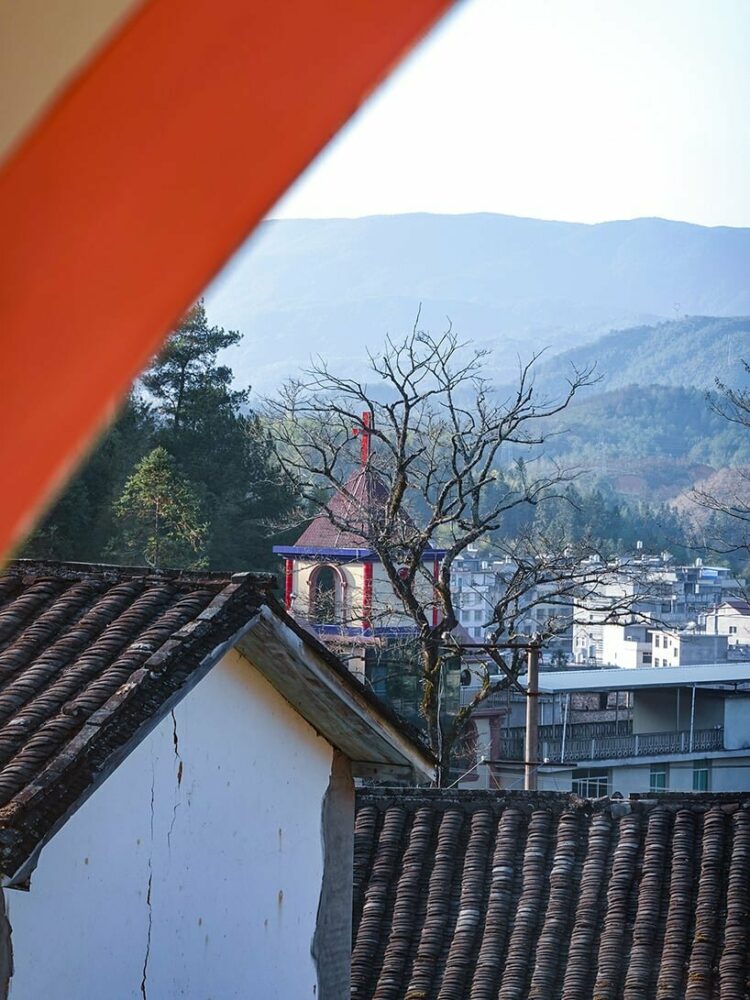 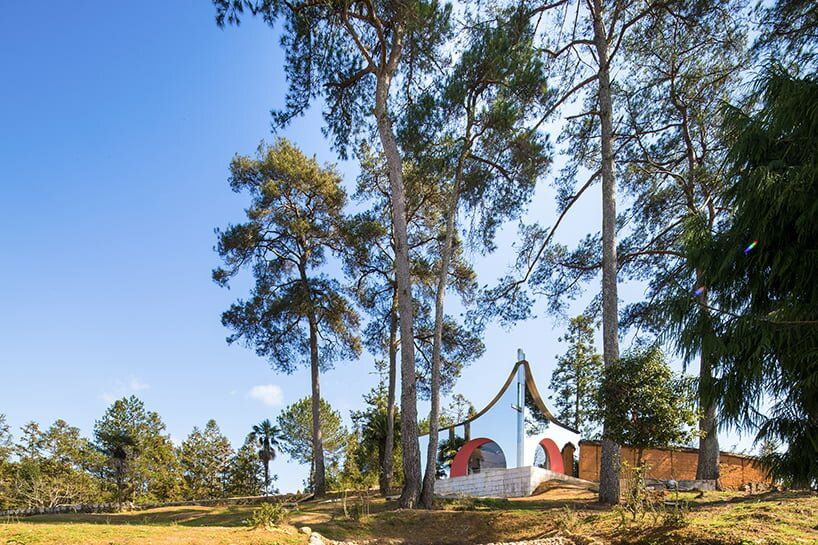