as a media partner of OHNY weekend, designboom has selected 10 not to miss sites that will be open to the public. read more below, and plan your own itinerary on the official site here. 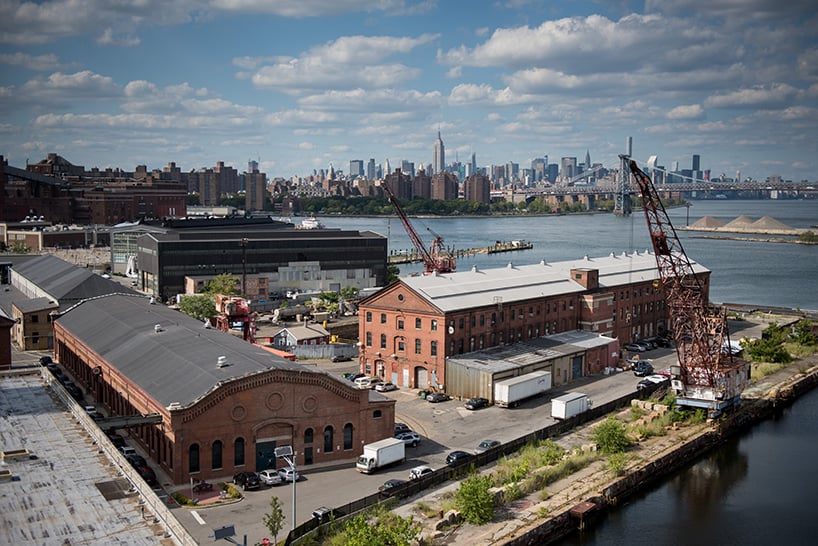 the brooklyn navy yard is an industrial park home to a vibrant community of over 450 businesses. established as one of the nation’s first naval shipyards (1801-1966), the site is currently undergoing its largest period of growth since the second world war. on the saturday of OHNY weekend — the one day a year that the yard is open to the public — more than 50 tenants will open their doors to allow visitors to engage with the yard through a series of tours and programs. for more information about what will be open at the brooklyn navy yard during OHNY weekend, see here. 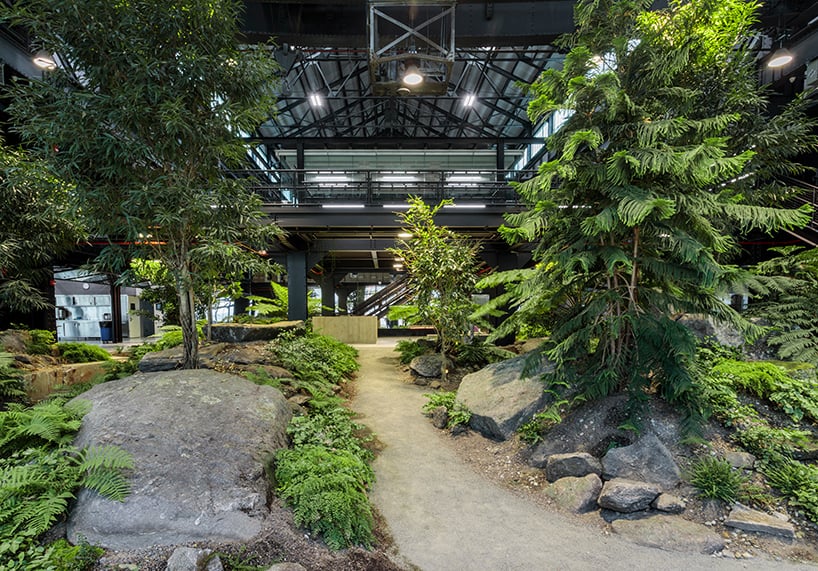 one such company is crye precision, who designs and manufactures protective equipment destined for use by the most elite members of the US military. the firm’s facilities are housed within building 128 at the brooklyn navy yard, which was originally built in 1902. visitors will be able see how design studios, testing areas, production spaces, exhibition and conference zones, cafeterias — and even a space for tai chi — merge seamlessly with the historic steel, glass, and masonry structure. see full details here. 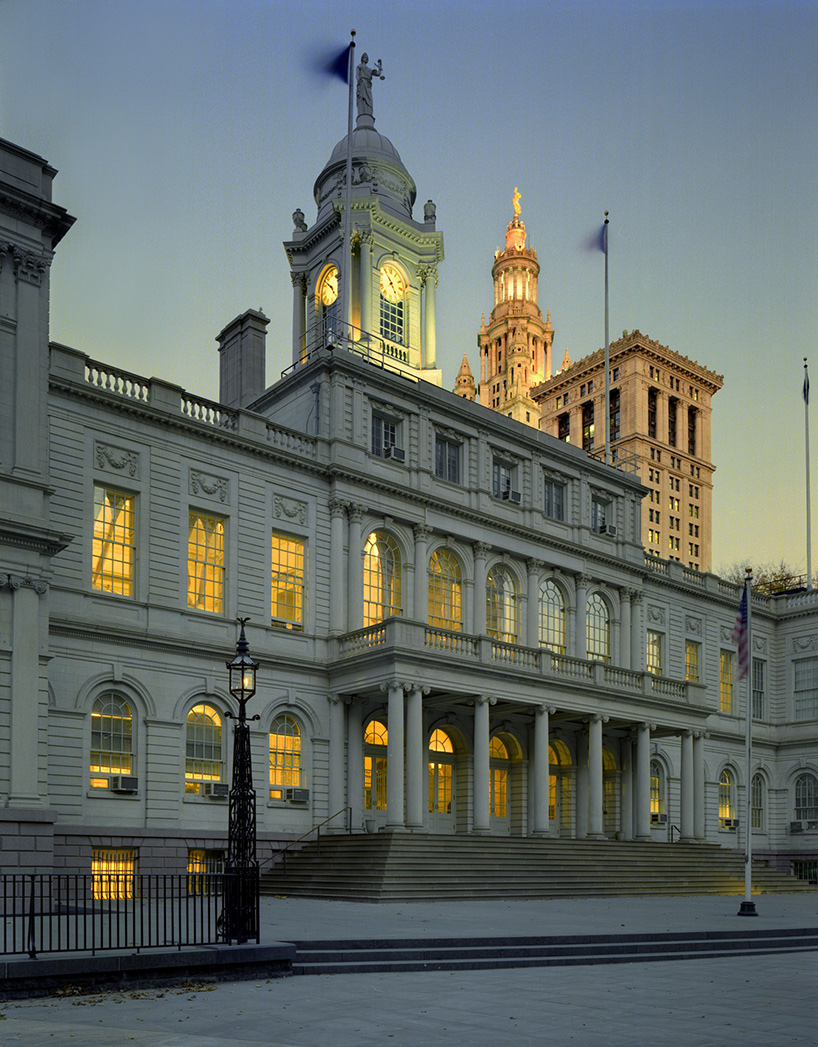 new york city hall is one of the oldest in the nation and the oldest that is still serving its original government functions, including the office of the mayor of new york city and the chambers of the new york city council. combining a french renaissance exterior and american georgian interior, the nationally landmarked building features a rotunda with marble floors, one of the country’s first keystone-cantilevered staircases, and a coffered dome with a central oculus. the plaza, rotunda, city council chamber, and governor’s room will all be open to visitors. see more details here. 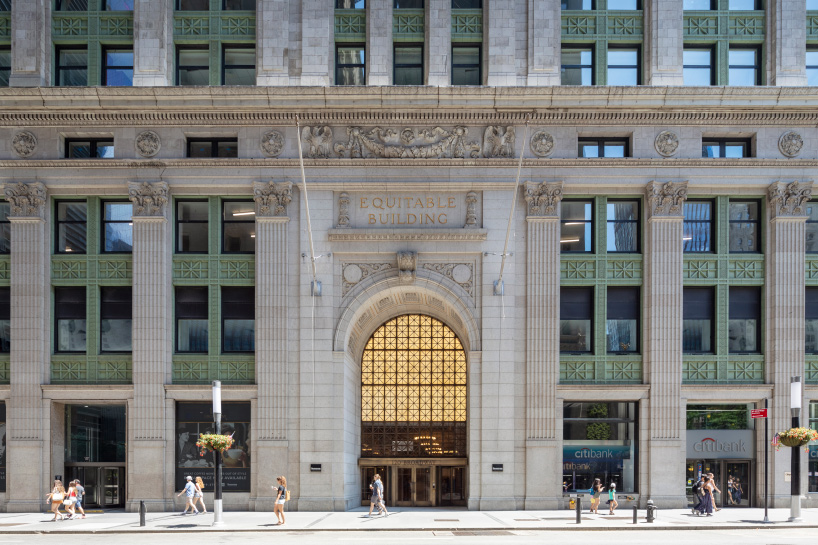 the equitable building at 120 broadway spans an entire city block and, at the time of its opening, was the world’s largest office building. often regarded as one of the city’s most noteworthy beaux arts masterpieces, the 40-story office building features vaulted ceilings, gold leaf accents, marble floors, and hand-carved architectural detailing throughout. the equitable building recently completed a $50 million renovation to reinvigorate the building’s signature features, returning them to their original 1915 splendor. see more here, including details of a tour that focuses on the building’s lighting. 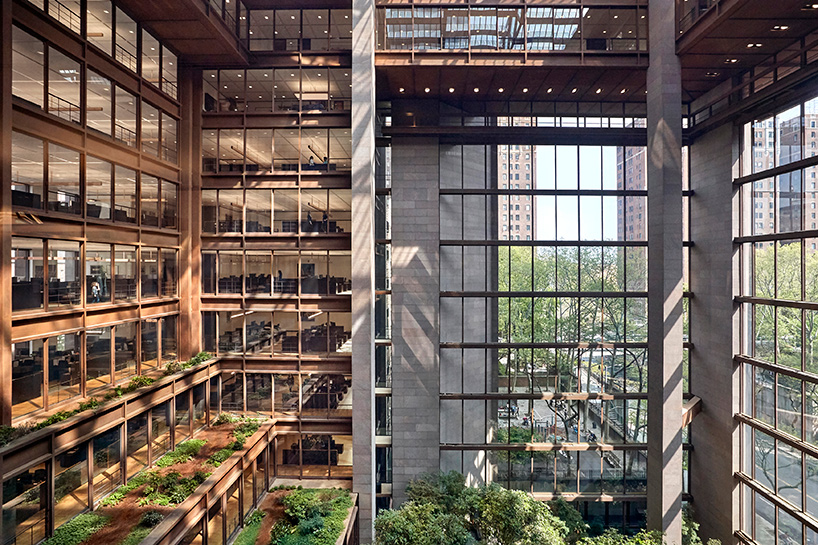 commissioned by henry ford II in the 1960s, the ford foundation was designed as a soaring, inspiring space for the foundation’s headquarters. the 12-story enclosed atrium garden was the first of its kind in the US and, in 1997, new york city’s landmarks preservation commission designated it an official landmark. following a 3-year restoration by gensler, the new center opened in 2018, preserving the building’s original character while making it even more open and inclusive. the atrium garden is open to the public, as is a new gallery focused on artists whose work engages with issues of justice, dignity, and fairness. see more details here. 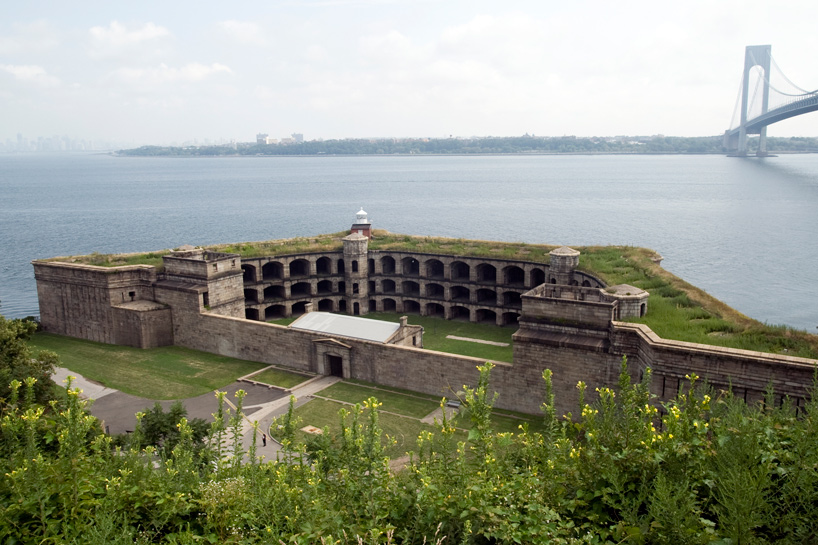 fort wadsworth is one of the oldest military installations in the nation. the site occupies 226 acres on the northeastern shore of staten island, on the narrows of new york harbor. battery weed lies at the toe of the slope and is one of the earliest structures that remains intact at fort wadsworth. battery weed’s construction involved the use of granite blocks in a half-hexagon shape and included a central parade ground. at the time of its completion (1861-1864) it included 116 cannons, three tiers of casemates, and a fourth barbette tier, each with gun emplacements. see more details here. 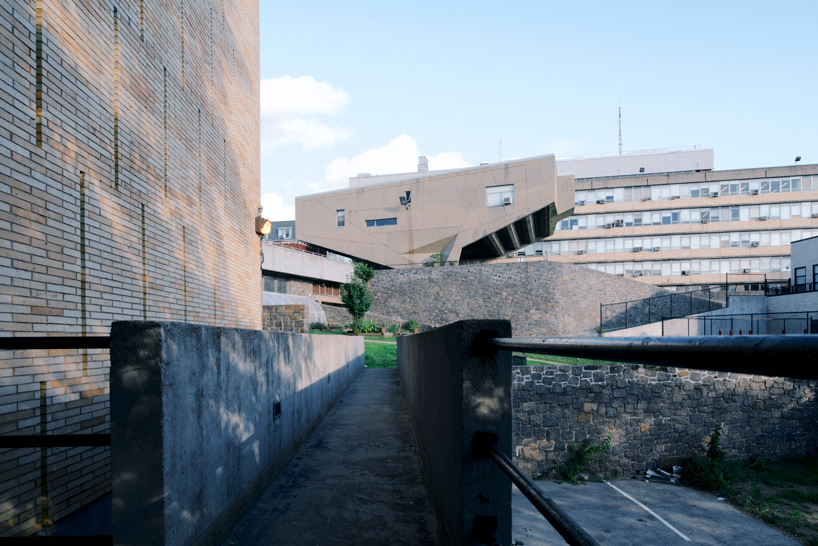 in 1956, marcel breuer was asked to develop a comprehensive design for the uptown campus of new york university (now bronx community college). from 1959-1970, five buildings were built based on the design and planning of breuer and his associates hamilton smith and robert f. gatje. these modernist structures of reinforced concrete and steel provide a dramatic contrast to the neo-classical architecture seen elsewhere on campus. see more details here. 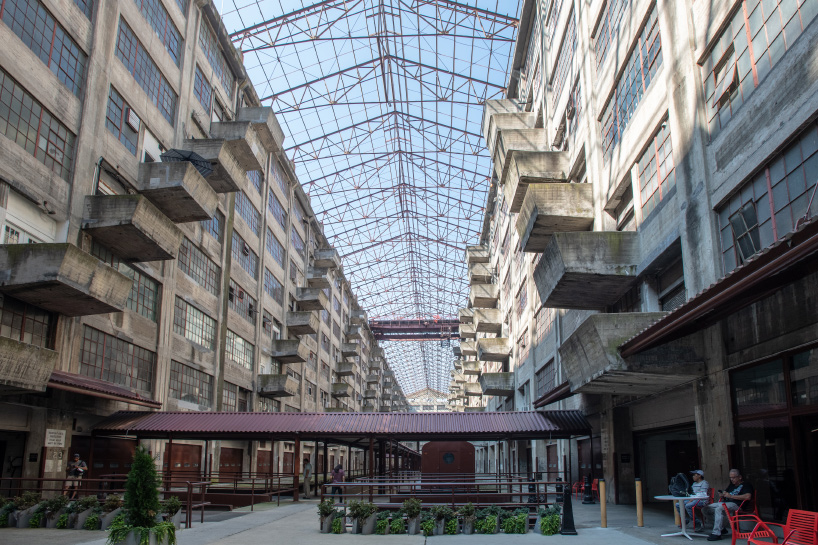 the brooklyn army terminal (BAT) is a large warehouse complex for innovative businesses looking to grow and expand in new york city. constructed by the US army in 1918-19, BAT served as a major military supply for nearly 50 years. cass gilbert, known for his beaux arts and gothic style designs like the woolworth building, was BAT’s principal architect, designing what was, at the time, the largest concrete structure in the world. since BAT was acquired by the city of new york in 1981, more than $185 million has been invested to transform the facility into a modern industrial campus, now home to more than 100 tenants with 3,600 employees. this year, in addition to the building’s famous atrium, dozens of artist studios will be open to visit. see more details here. located in brooklyn’s greenpoint community, newtown creek is the largest of new york city’s 14 wastewater treatment plants. serving as lead architect and masterplanner, ennead architects was responsible for expanding and redesigning the plant while keeping it fully operational. the expansion included a nature walk, providing the first public access to the newtown creek waterfront in decades, and a visitor center, an indoor destination where school groups and the public can learn how the city’s sewer system works and about the watershed that provides new york city’s drinking water. the plant’s most dramatic element is its eight futuristic, stainless steel-clad digester eggs visible by day and night from manhattan, brooklyn, and queens. see more details here. 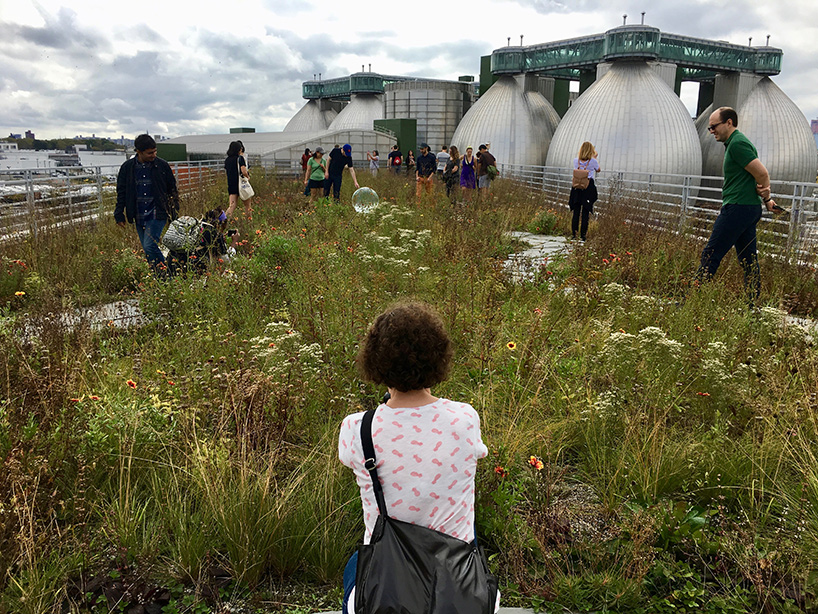 other activities in the vicinity include the birthplace of mobil oil walking tour, led by newtown creek alliance historian mitch waxman. the tour details the on-going efforts to help restore and revitalize areas around newtown creek, which was added to the federal superfund list in 2010. the short walk will cover the greenpoint oil spill, a 20-million gallon plume of crude oil mixed in with the local groundwater, and pass by the newtown creek wastewater treatment plant itself. participants will also visit the recently opened kingsland wildflowers green roof, a bird-friendly habitat that offers panoramic views of the new york city skyline, newtown creek waterway, and surrounding industrial sites. 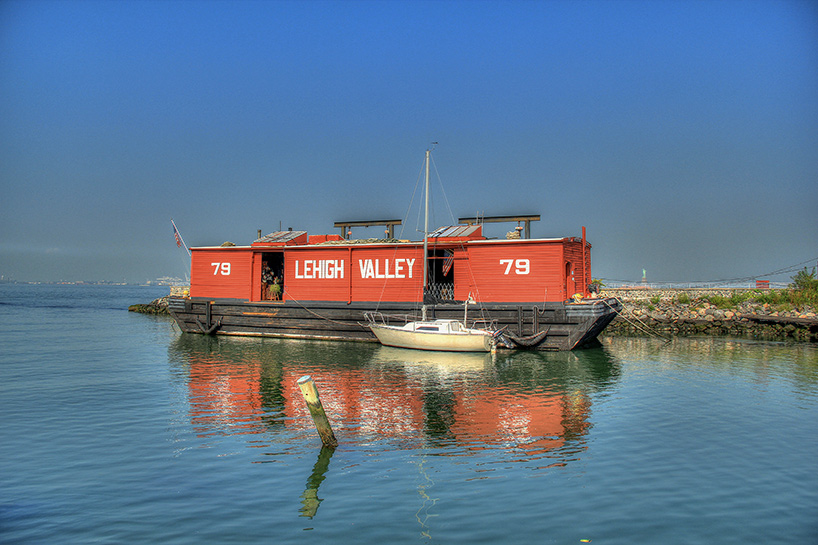 prior to today’s era of containerization, railroad companies maintained large fleets of barges to bring goods between terminals, across and along the hudson river for consumer use, and for shipment overseas. at one time there were over 5,000 non-self-propelled barges. today, however, there is only one surviving example left afloat. the lehigh valley railroad barge #79, built in perth amboy, NJ in 1914, is the only wooden covered barge of its kind left over from ‘the lighterage era’ (1860-1984).  in her 33-year history as a showboat and classroom, hundreds of thousands have come to the waterfront to participate in arts and education programs. see more details of access to the waterfront barge museum here. 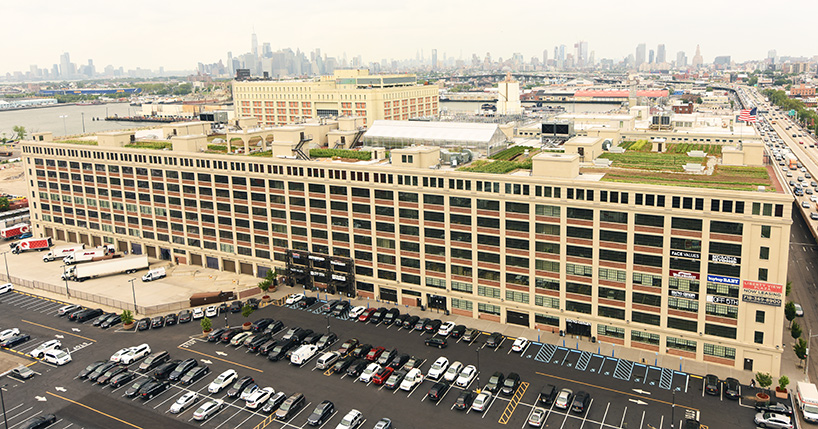 brooklyn grange is the leading rooftop farming and intensive green roofing business in the US. it operates the world’s largest rooftop soil farms, located on three roofs in new york city, and grows over 80,000 lbs of organically cultivated produce per year. in addition to growing and distributing fresh local vegetables and herbs, brooklyn grange hosts events from educational tours and workshops to weddings, and provides urban farming and green roof consulting and installation services to clients worldwide. read more details about the opening of the three farms in sunset park, long island city, and at the brooklyn navy yard.

see the full list of activities and events for OHNY weekend here. 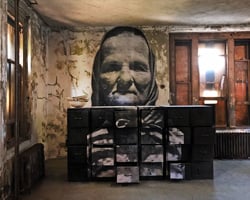 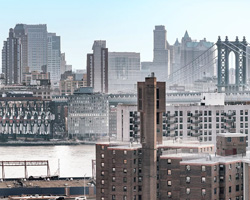 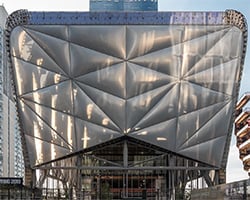