the ancient ‘convent of the penitents’ in downtown louviers was built between 1646 and 1659 for the third order of st. francis, and has undergone a long history of radical changes and proprietors until finally finding its new home as a modern ‘maurice durufle music school.’ originally composed of a church to the west, two convent wings to the south and east and a central cloister where the middle arm of the eure river flows, the architecture followed a vernacular impressionist language, combining stone, water, and vegetation that elicited its nickname as the ‘cloister on the water’. unfortunately, the complex was sold in 1789 to the state and turned into a prison, from which point it underwent a series of design changes that would permanently devastate certain sections of the construction. 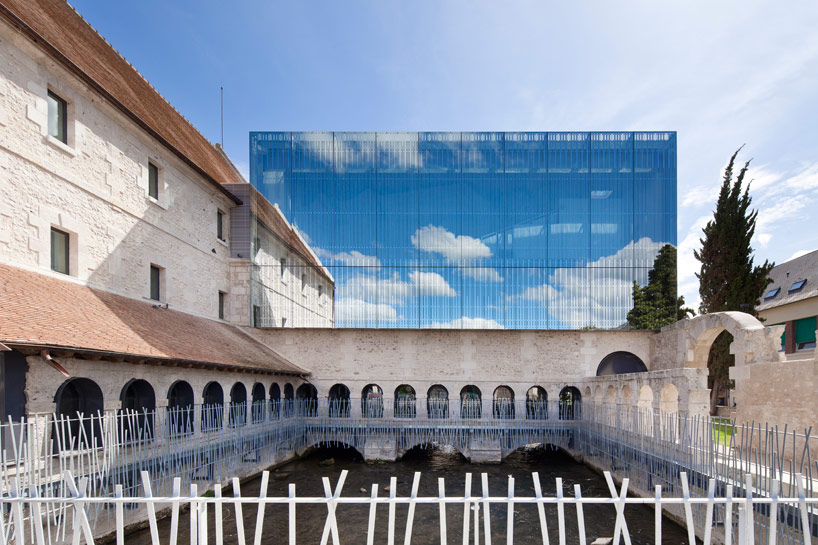 in 1827 the church was demolished and the courtyard was moved to a newly constructed structure on the east wing, followed by the addition of another building housing the prison guards along the street in 1905. the jail closed down in 1934 with the south wing completely ruined beyond repair and a series of new annexes around the original cloister. it wasn’t until 1990 that the structures were re-appropriated for use as a music school, eventually to be renewed to the contemporary era by local practice opus 5 architectes, with a renovation that would not only create a new identity for the historical treasure, but also provide modern amenities and resurrect its rich cultural history as the ‘cloister on the water’. 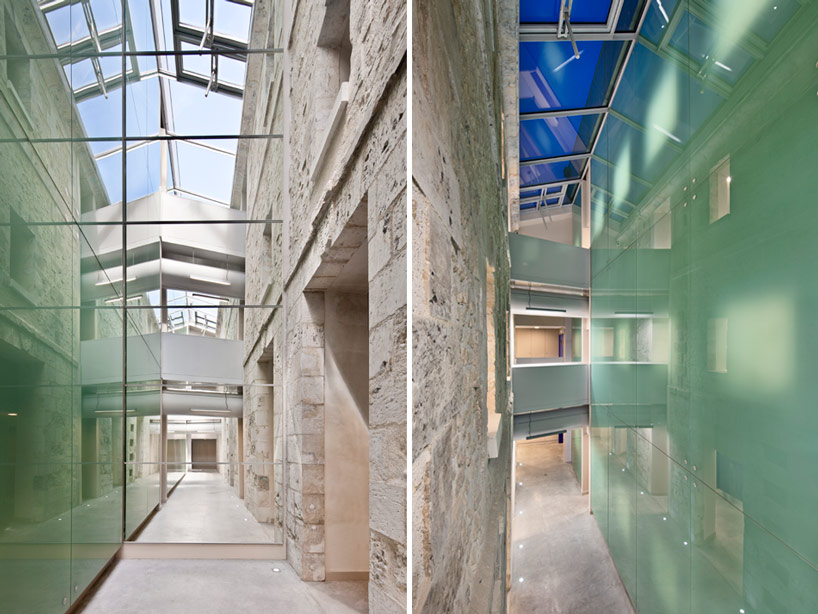 renovated interior juxtaposing the contemporary with the historicalimage © luc boegly

using original drawings and photographs from the early 20th century the architects began the process of restoration, matching mortar tones and strengthening masonry walls to comply with current-day safety and structural standards. more importantly, they reconstructed the demolished sections exactly as they once  stood, with the same methods and materials that preserve the ancient character. as the new program – 24 study rooms, a score library, and two large orchestra  auditoriums – were being infused in the structures, it became clear that the recently added wings were visually dominating the very structure they were meant to respect, due to the shear size of the new program being injected. the new southern extension that houses the concert halls was set back from the site line to maintain the water feature and the old architectural language – a preservation of the ‘cloister on the water’.

as the section was rebuilt vertically to accommodate new functions while respecting the compact site, a reflective glass curtain wall was employed on the facade that reflects the surrounding environment and loses itself in the daytime sky, while becoming a secondary object against the original building with a night glow that renews it as icon in the city. glass panels are laminated with chrome strips and attach to fasteners that hang on the steel box frame substructure. the interior surface is clad in titanium, silicon nitride, and chrome that add to the mirroring effect of the partition. the other exterior envelopes continue the irregular discontinuation of the historical masonry walls with precast concrete panels custom made to follow and expose the jagged joints, supported by concealed internal metal beams. 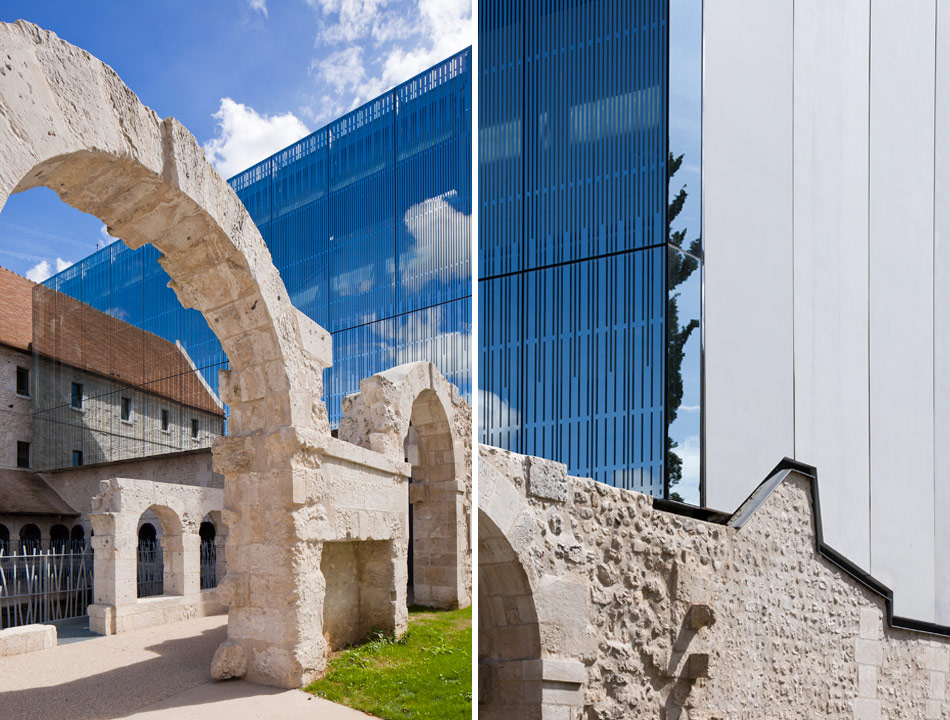 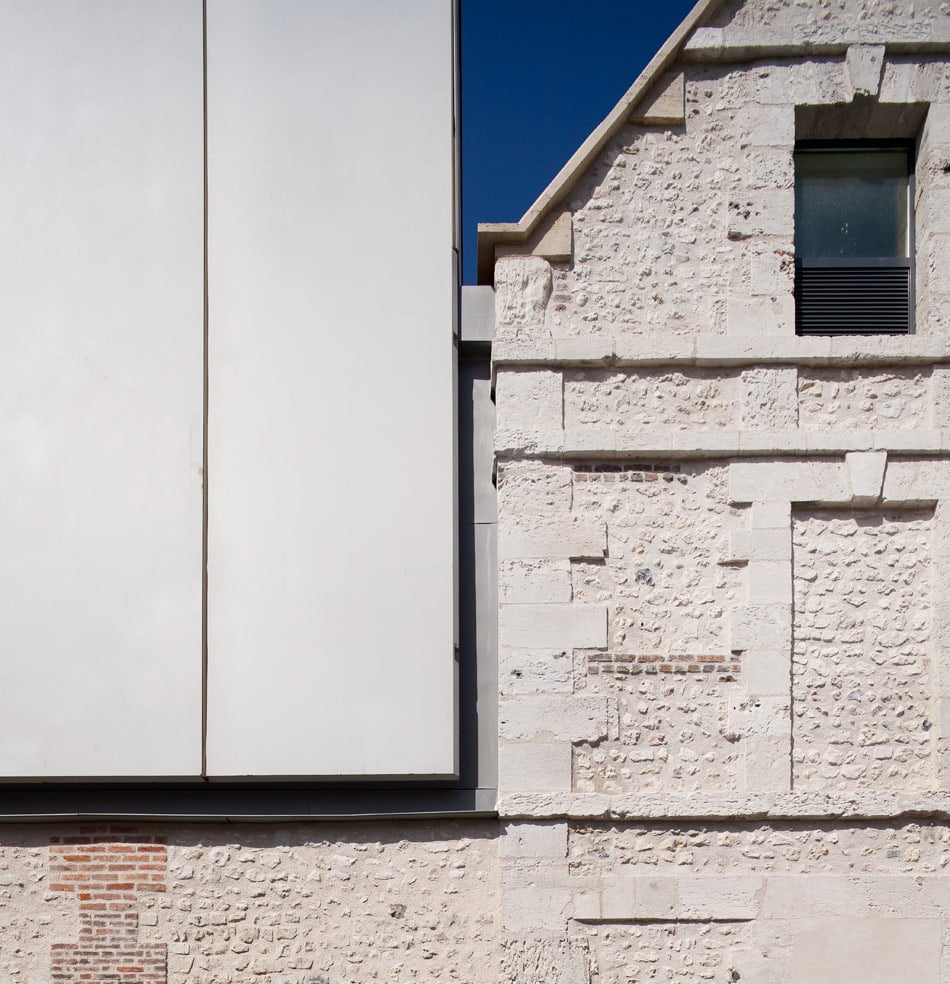 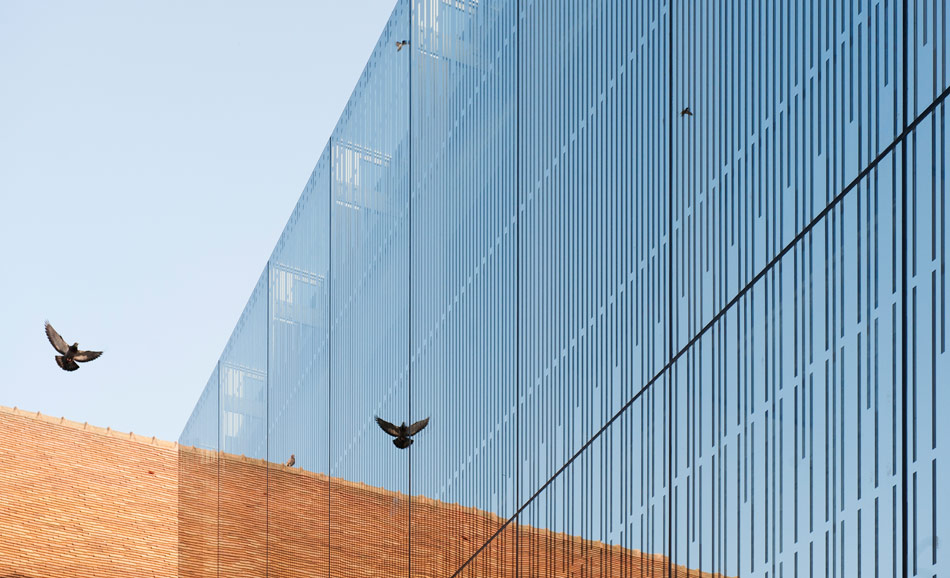 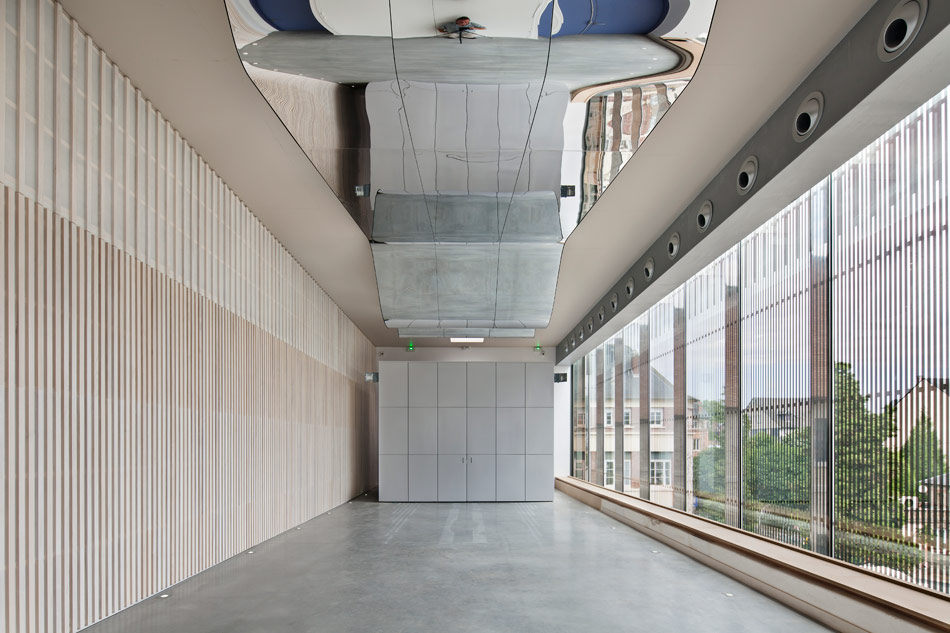 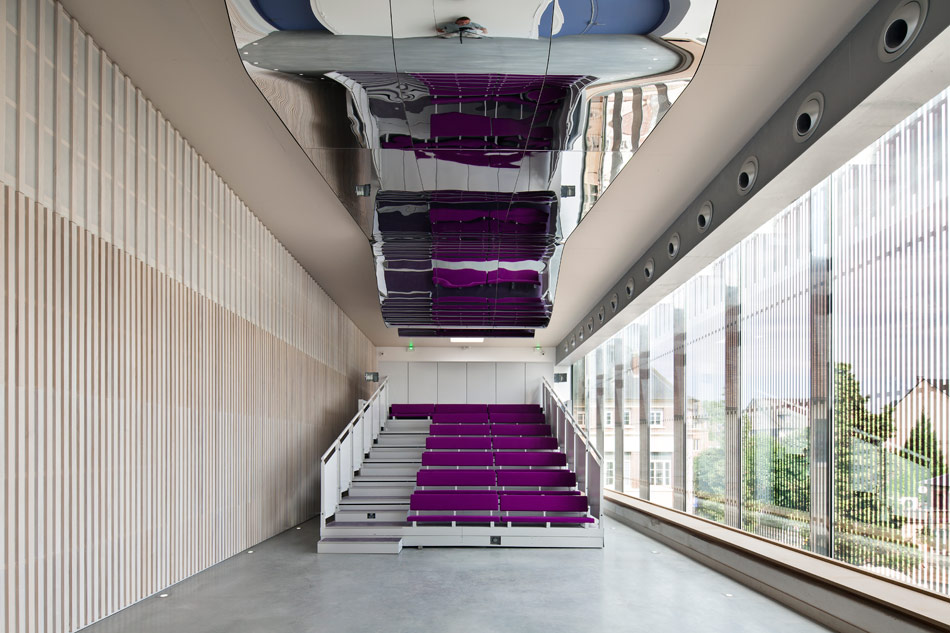 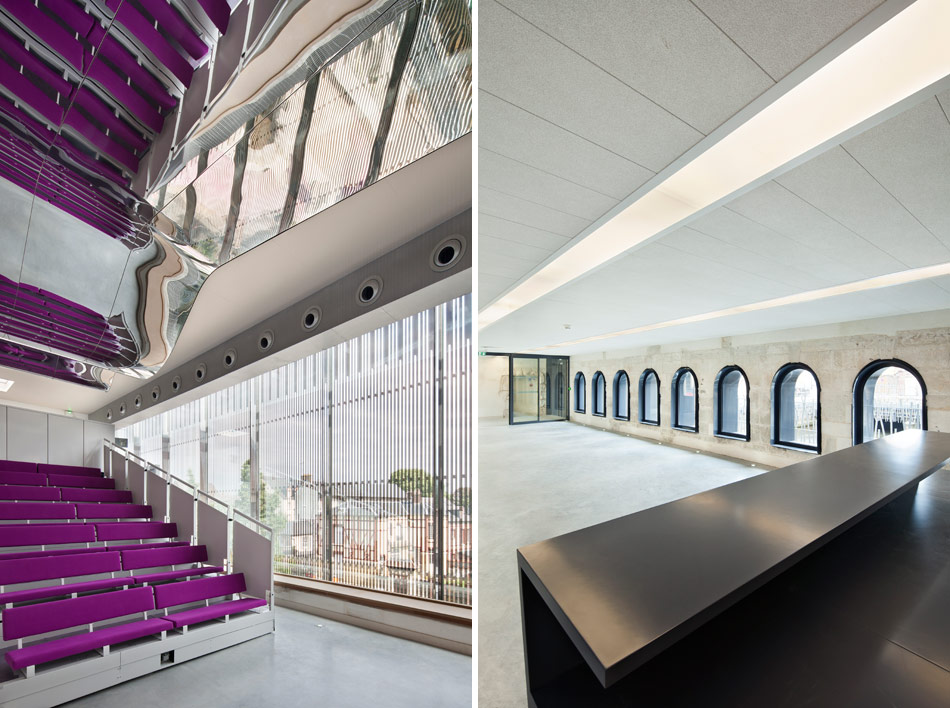 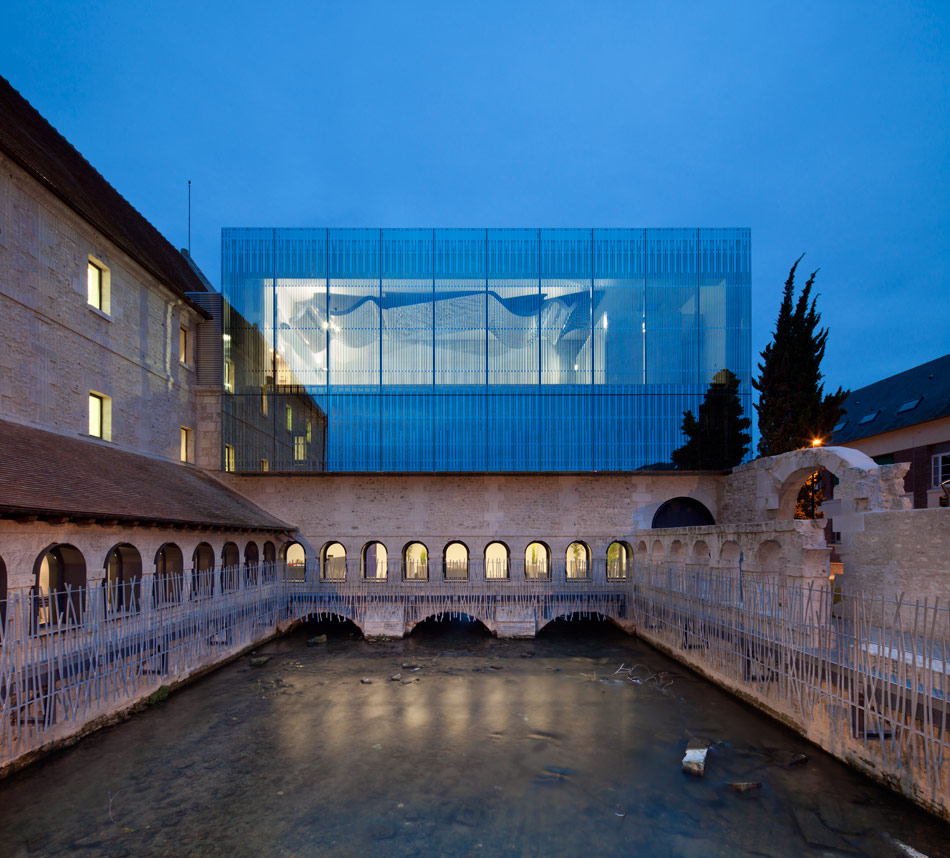 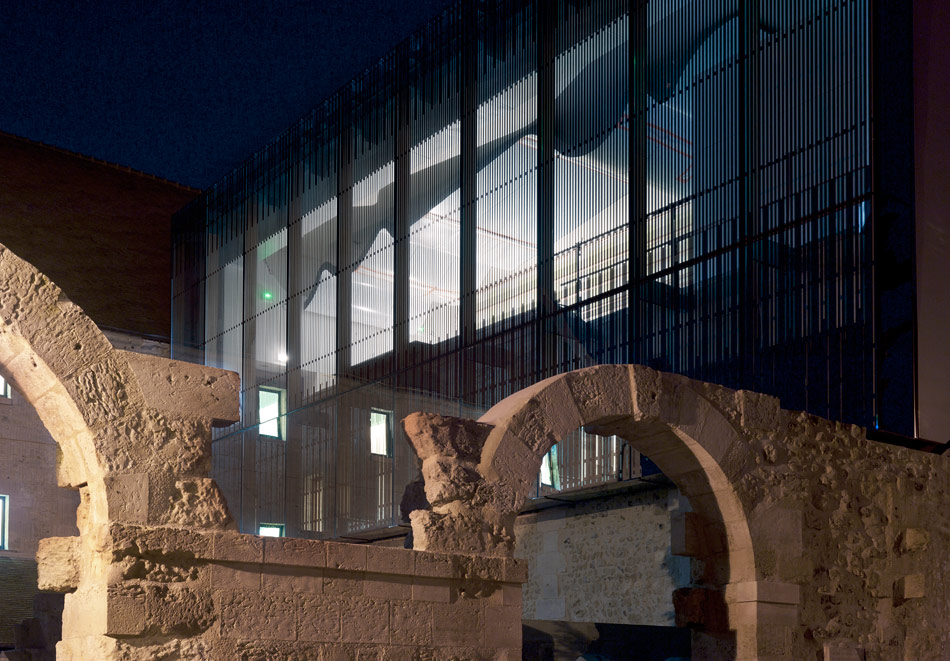 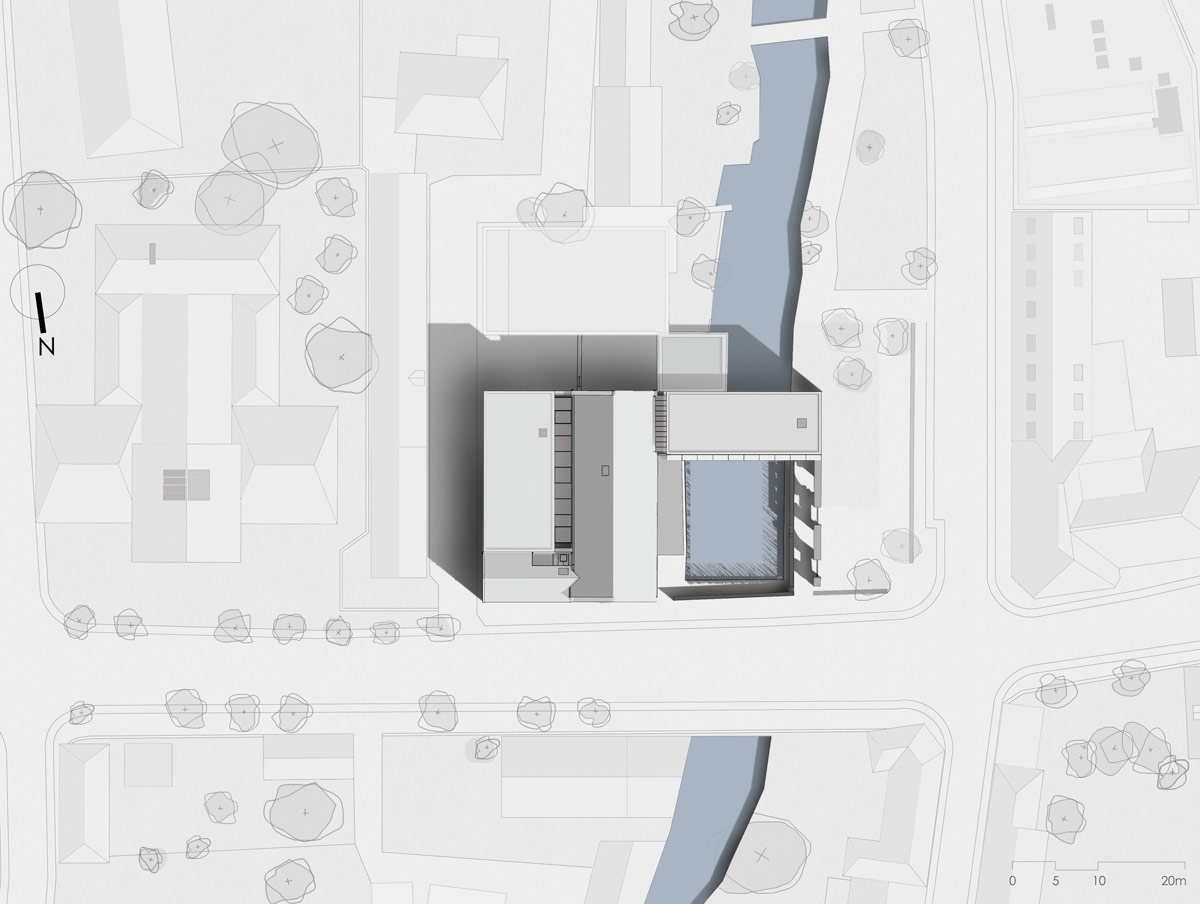 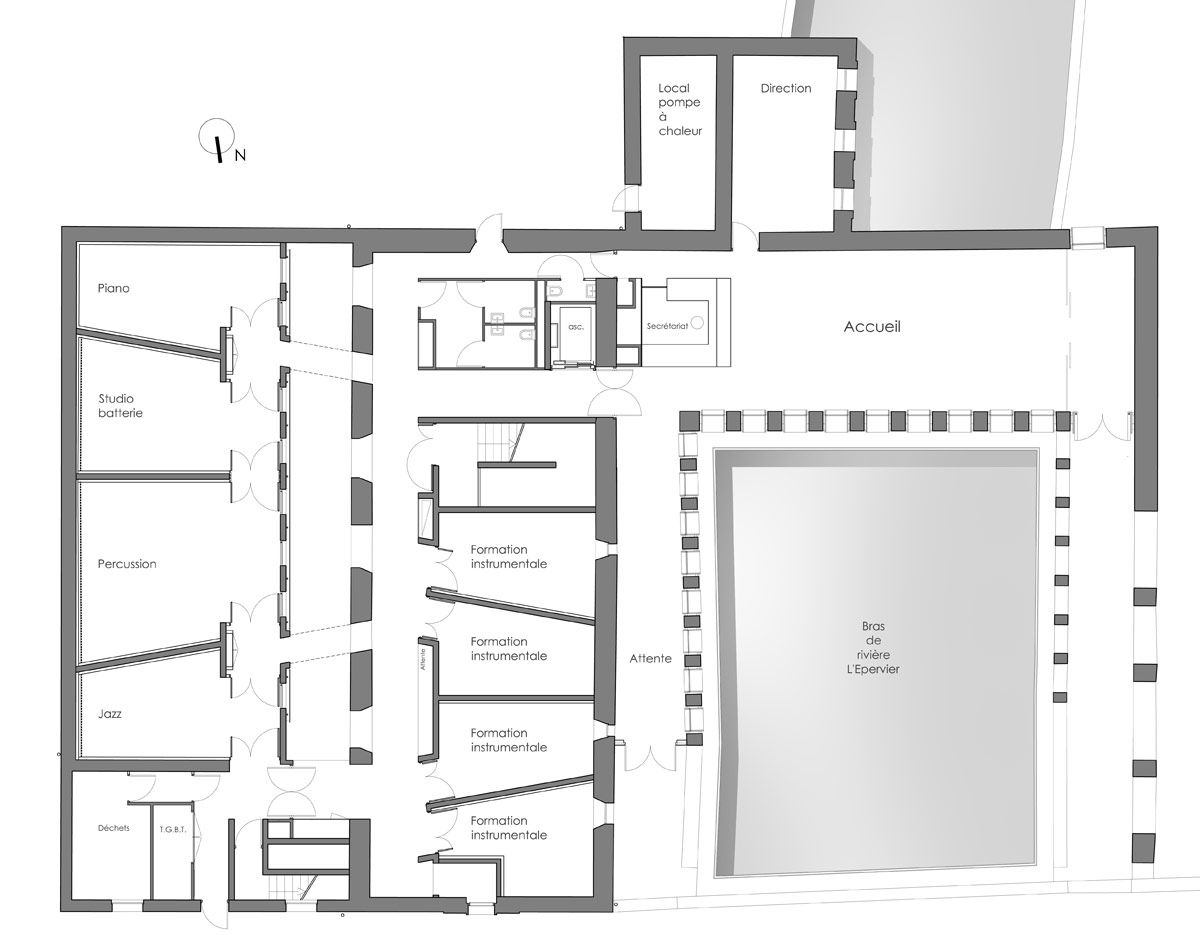 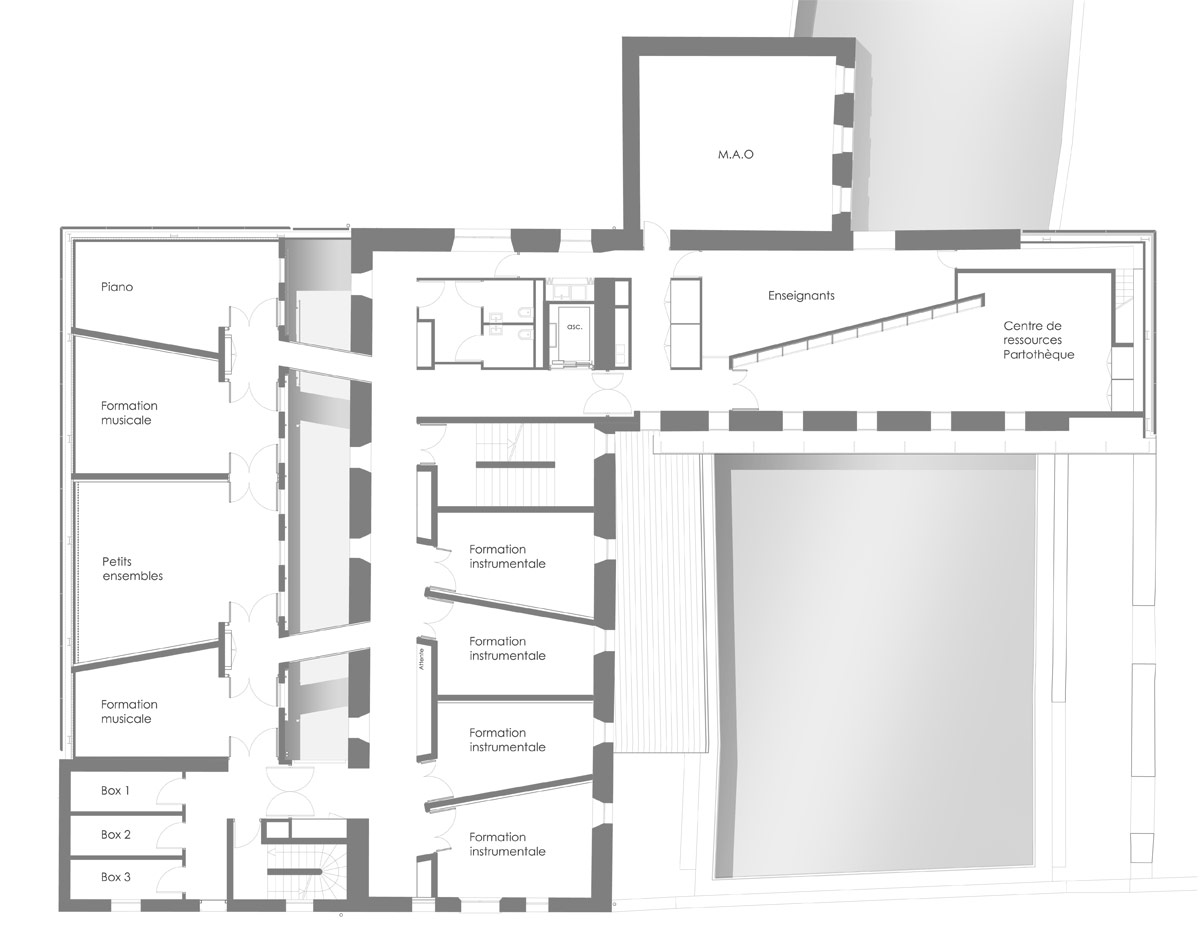 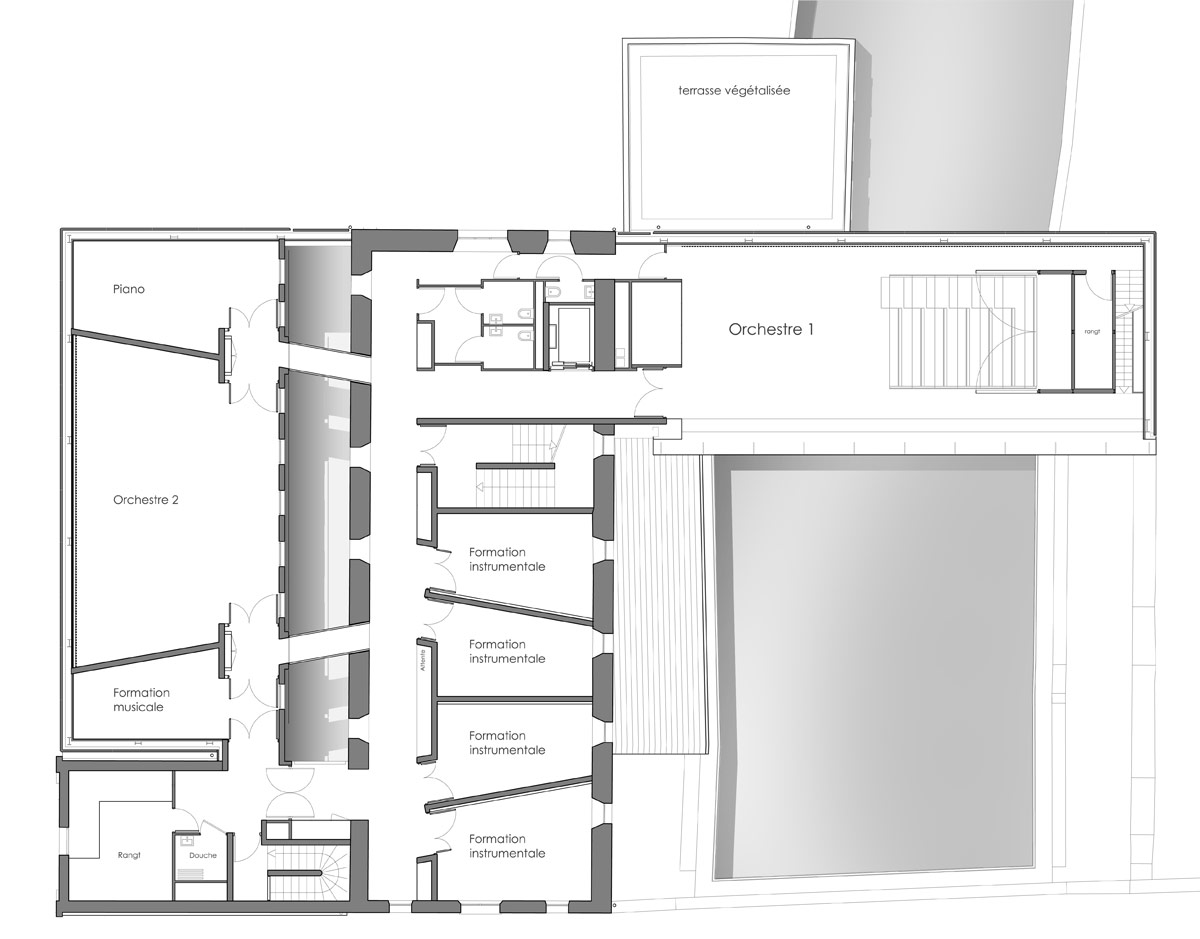 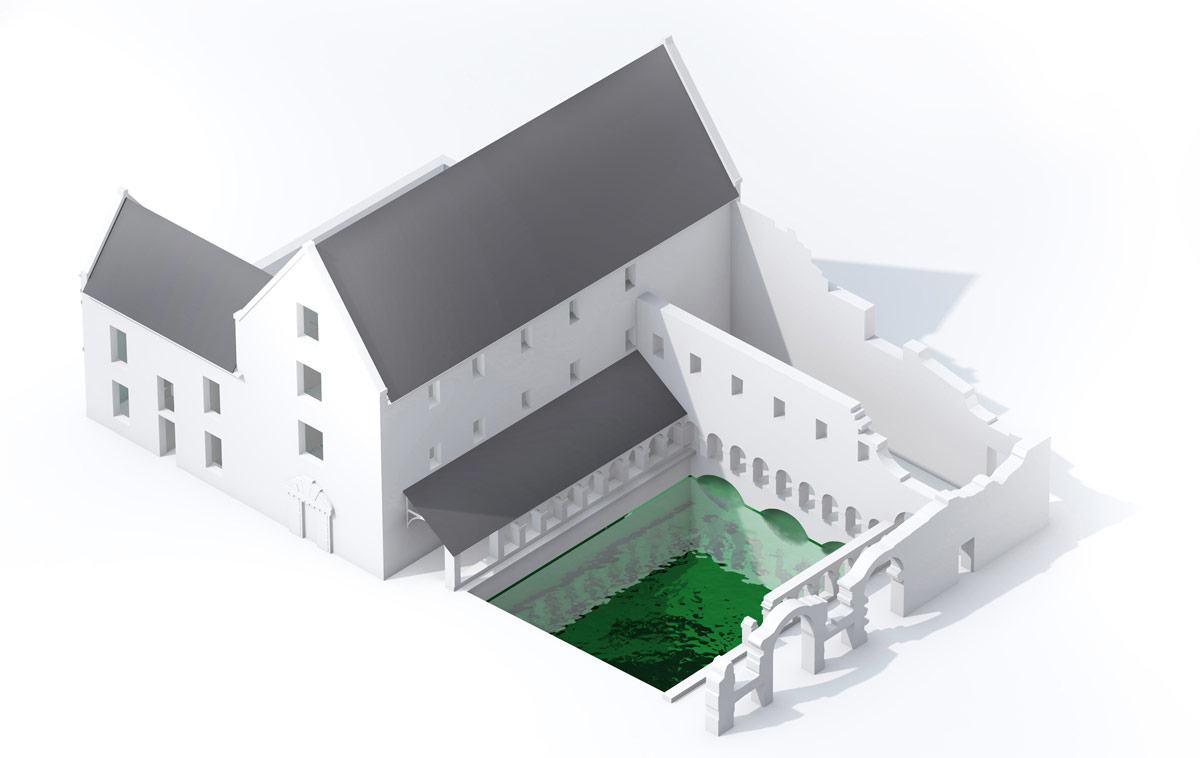 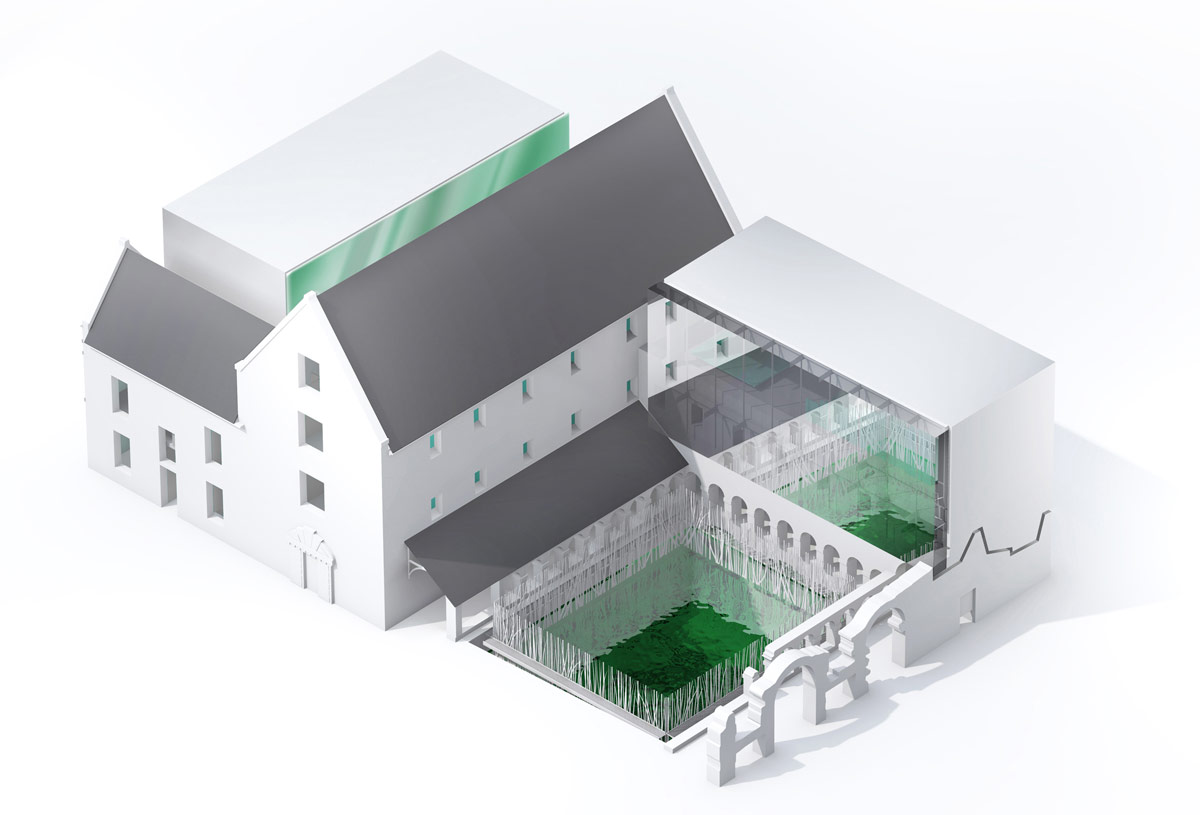 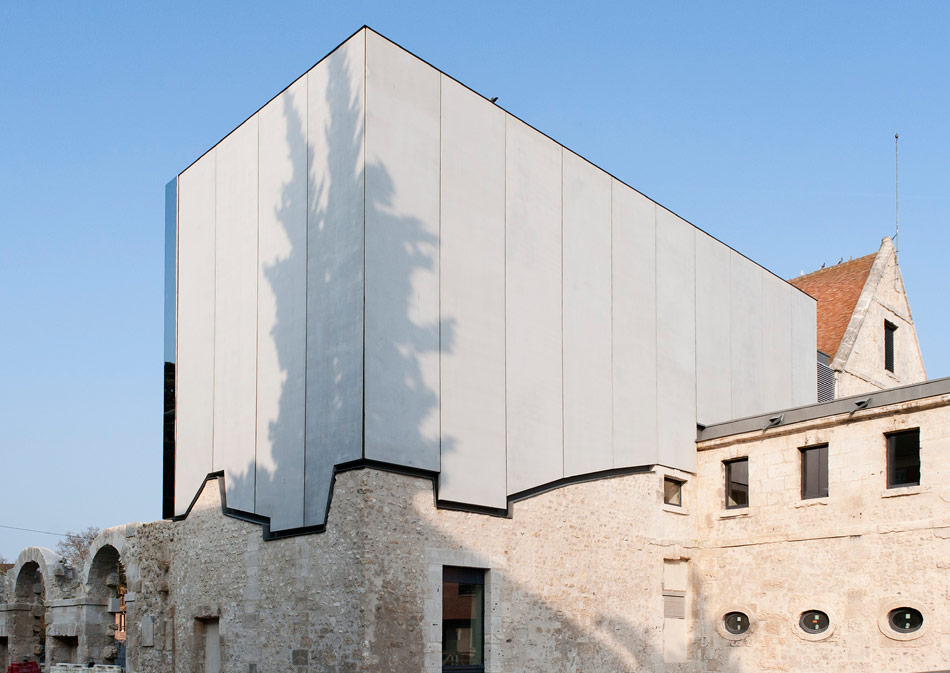 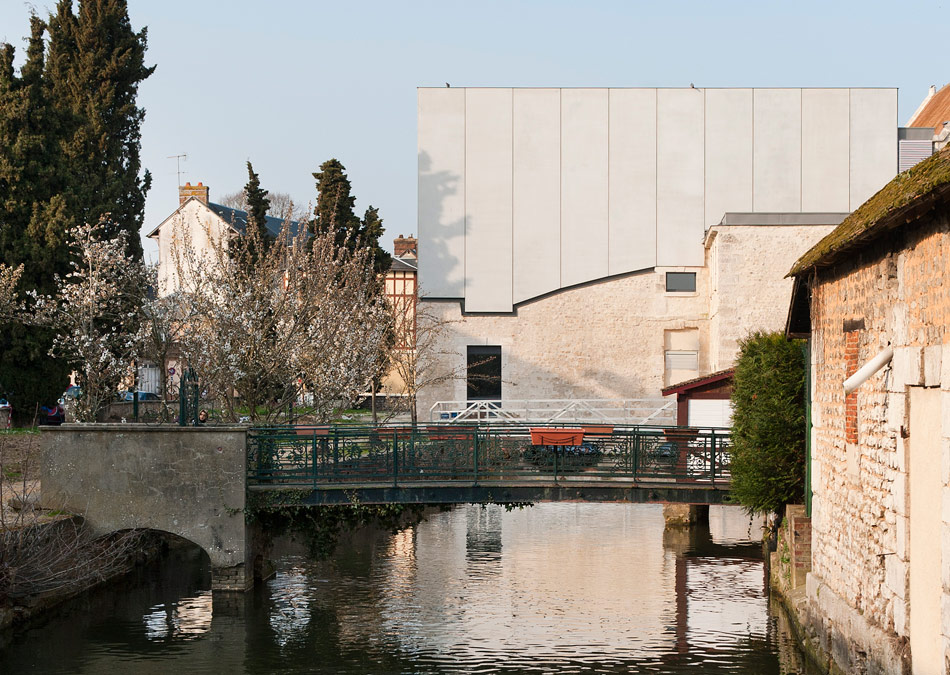 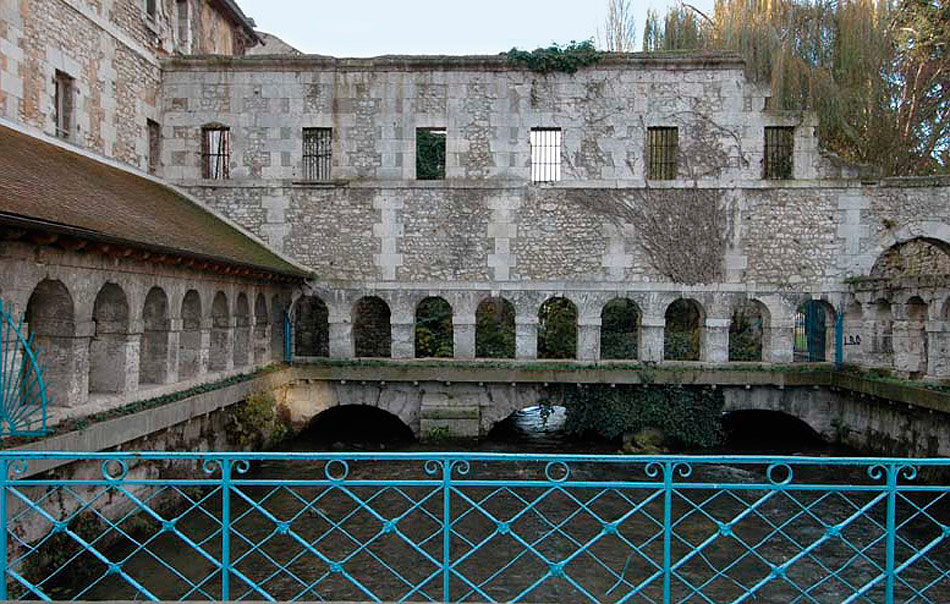 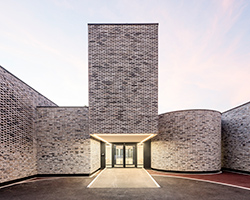 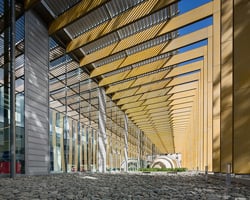