the brazilian architect passed away on wednesday at age of 104, on december 15 he would have completed 105 years.the cause was a respiratory infection, a hospital spokeswoman told the associated press.after a precedent pneumonia in may this year,  he was admitted to samaritano hospital in rio de janeiro for dehydration treatment and had been in critical condition ever since.

designboom is sorry to hear of oscar niemeyer’s passing, he will be missed by everyone who met him and who followed his work. 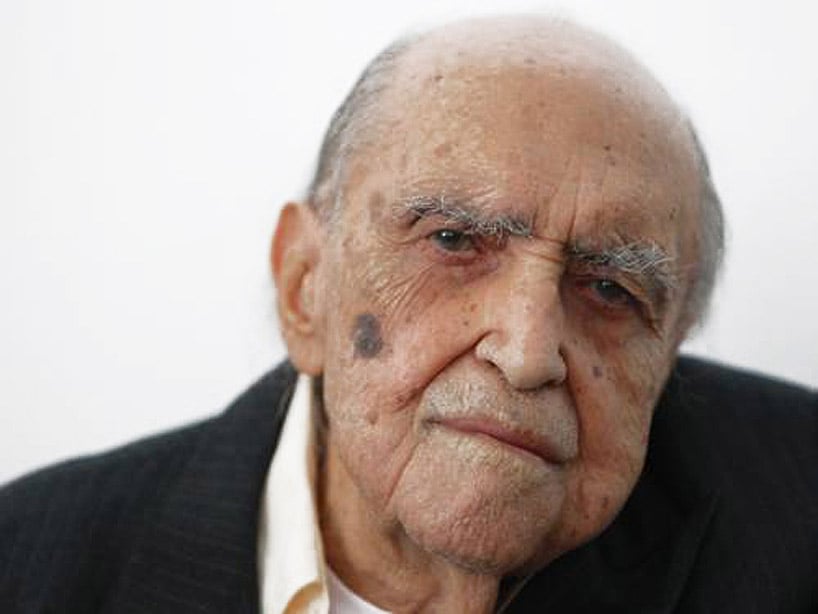 oscar ribeiro de almeida de niemeyer soares was a carioca — a native of rio — whose heritage was portuguese, arab and german.a disciple of le corbusier, however niemeyer saw his work as very distinct from his mentor’s. as he told the times: ‘he posited the right angle. I posit the curve.’ ‘curves are the essence of my work because they are the essence of brazil, pure and simple,’ niemeyer told the washington post. he was awarded the 1988 pritzker prize at age of 80.his vision helped shape his nation’s futuristic capital brasilia in the 1940s and 1950s and made an international name for himself with the designof the united nations’ headquarters in new york. niemeyer is also well known for his work in the paris headquarters of the french communistparty and those of the mondadori publishing house near milan.

I was deeply saddened to learn of the death of oscar niemeyer. he was an inspiration to me – and to a generation of architects.few people get to meet their heroes and i am grateful to have had the chance to spend time with him in rio last year.

for architects schooled in the mainstream modern movement, he stood accepted wisdom on its head. inverting the familiardictum that ‘form follows function’, niemeyer demonstrated instead that, ‘when a form creates beauty it becomes functionaland therefore fundamental in architecture’.

it is said that when the pioneering russian cosmonaut, yuri gagarin visited brasilia he likened the experience to landing on adifferent planet. many people seeing niemeyer’s city for the first time must have felt the same way. it was daring, sculptural,colourful and free – and like nothing else that had gone before. few architects in recent history have been able to summon sucha vibrant vocabulary and structure it into such a brilliantly communicative and seductive tectonic language.

one cannot contemplate brasilia’s crown-like cathedral, for example, without being thrilled both by its formal dynamism andits structural economy, which combine to engender a sense almost of weightlessness from within, as the enclosure appears todissolve entirely into glass. and what architect can resist trying to work out how the tapering, bone-like concrete columns ofthe alvorada palace are able to touch the ground so lightly. brasilia is not simply designed, it is choreographed;each of its fluidly-composed pieces seems to stand, like a dancer, on its points frozen in a moment of absolute balance.but what I most enjoy in his work is that even the individual building is very much about the public promenade,the public dimension.

as a student in the early 1960s, I looked to niemeyer’s work for stimulation; poring over the drawings of each new project.fifty years later his work still has the power to startle us. his contemporary art museum at niteroi is exemplary in this regard.standing on its rocky promontory like some exotic plant form, it shatters convention by juxtaposing art with a panoramic viewof rio harbour. it is as if – in his mind – he had dashed the conventional gallery box on the rocks below, and challenged us toview art and nature as equals. I have walked the museum’s ramps. they are almost like a dance in space, inviting you to see thebuilding from many different viewpoints before you actually enter. I found it absolutely magic.

during our meeting last year, we spoke at length about his work – and he offered some valuable lessons for my own.it seems absurd to describe a 104 year old as youthful, but his energy and creativity were an inspiration.I was touched by his warmth and his great passion for life and for scientific discovery – he wanted to know about the cosmosand the world in which we live. in his words: ‘we are on board a fantastic ship!’

he told me that architecture is important, but that life is more important. and yet in the end his architecture is his ultimatelegacy. like the man himself, it is eternally youthful – he leaves us with a source of delight and inspiration for manygenerations to come.

Jan 14, 2021
junya ishigami completes plaza of kanagawa institute of technology in japan
remaining open to the elements, the project has been conceived as an expansive landscape that changes with the seasons and the weather.
architecture
274 shares
connections: +1490