last week oscar niemeyer had surgery to treat a gall bladder stone, but while he was under observation, some additional tests revealed that the brazilian architect had a tumor in his colon. two days ago, he underwent a second surgery – see article he seems to be doing well but will stay in intensive care for several more days. we’re crossing our fingers that he’ll be fine. 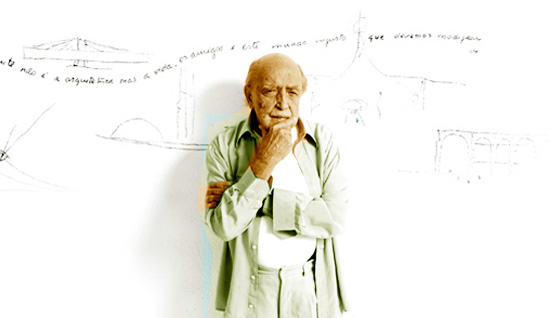 oscar niemeyer was born on dec. 15, 1907, in rio de janeiro and, despite his advanced age, continues to practice his profession. by continuing to explore the modernist aesthetic and refusing to depart from formalism and purity, niemeyer has turned himself into an eccentric humanist. he works from his office in rio and always cites his long-standing fear of flying that allows him to politely decline every invite for traveling.

the acclaimed architect and avowed communist, who a half century ago designed the main buildings of brasilia, the nation’s futuristic capital city, is known for the flowing curves of his reinforced concrete structures. his name has certainly fallen out of circulation in america, where he hasn’t built anything since he worked with le corbusier and wallace harrison on the united nations headquarters. niemeyer’s modernism has always been tied to his native country; a formalist, his buildings often refer to the shapes of the brazilian landscape, especially the curves of rio’s mountains and, he has said, her women. ‘curves make up the entire universe, the curved universe of einstein.’ he adds. 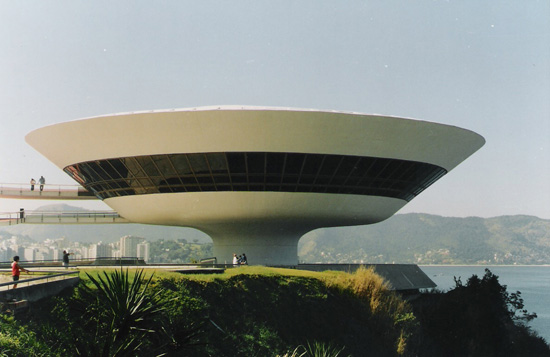 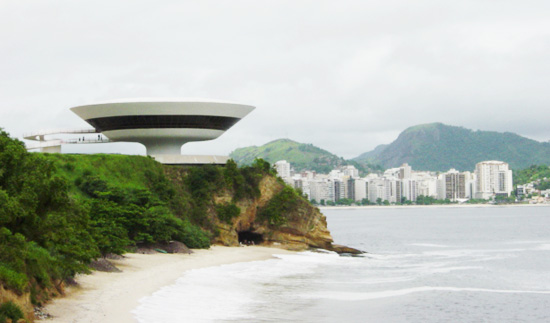 the museum occupies the kind of site normally reserved for lighthouses. the niterói contemporary art museum is set on a high point that extends into the bay, though rising only about 50 feet, the museum can be seen from all over rio’s waterfront and from the high mountains that jut up in the middle of the city. 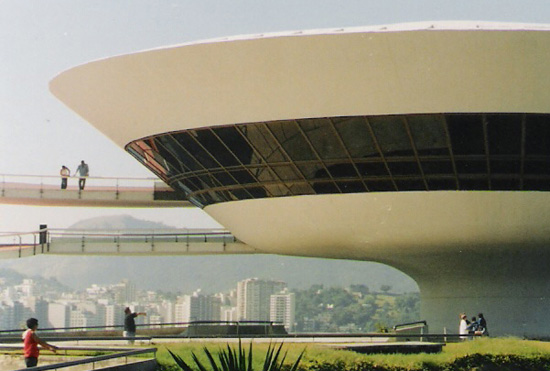 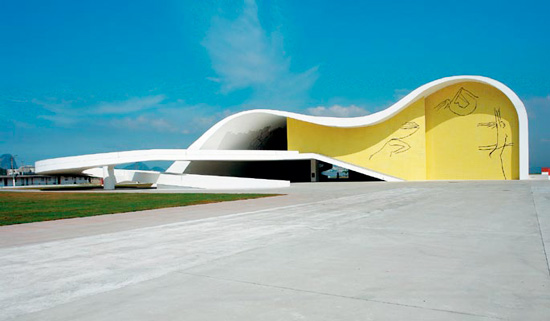 the city of niterói, also features some of niemeyer’s most recent projects, the people’s theater, 1999-2006 it opened on april 5, 2007 and marked the beginning of celebrations in advance of niemeyer’s centennial birthday. 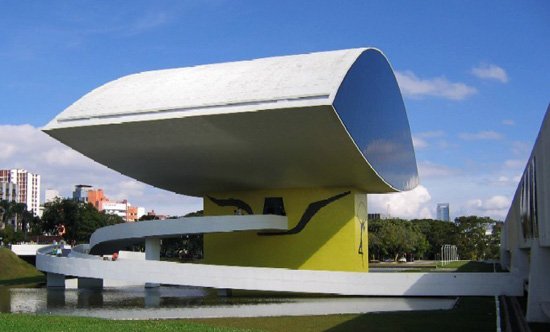 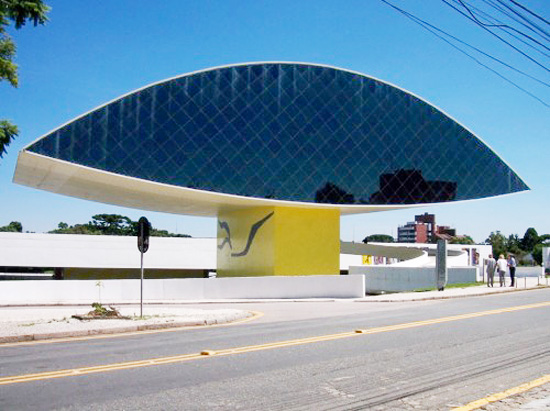 the museum became one of the city’s most photographed sightseeing spots. 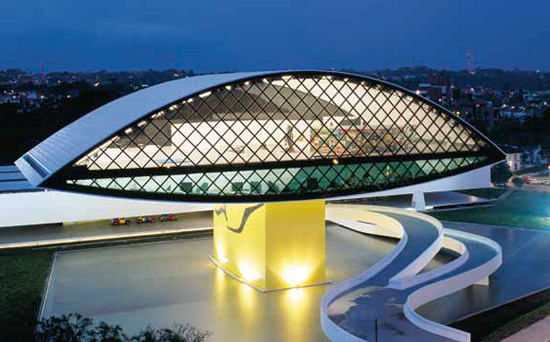 the museum by night 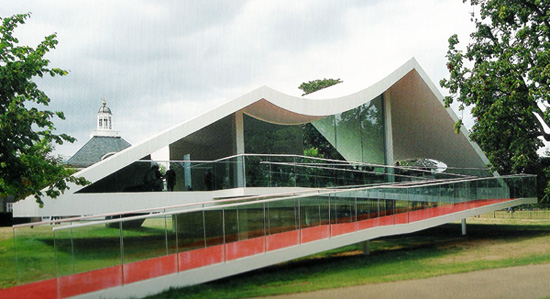 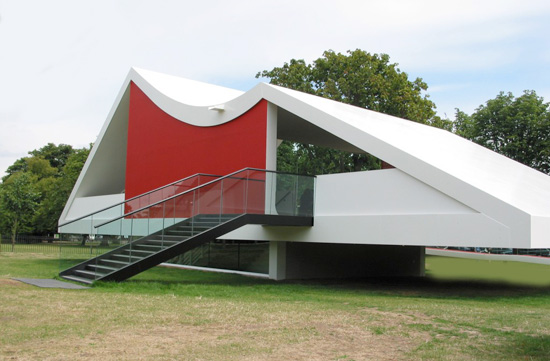 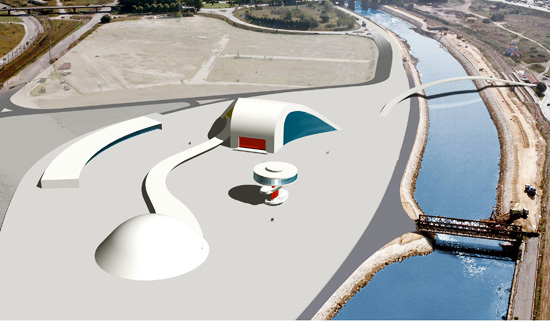 centro cultural niemeyer, to be built in avilés, spain, the inauguration of the center is planned for spring 2010

connecting the old city on one bank with new developments on former industrial land on the opposite side. a concrete hemisphere containing a large auditorium for concerts and meetings will be connected to a wave-like concrete arch housing a museum by a floating, serpentine-shaped canopy. a curved block of offices encloses the plaza on its landward side. 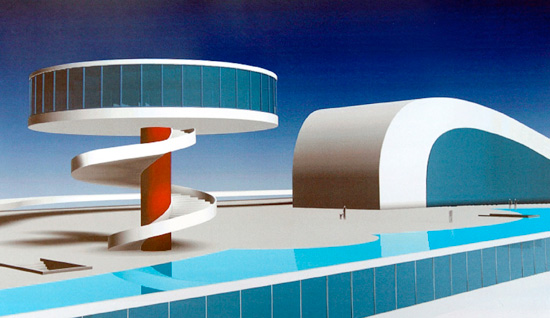 the complex is the only piece of work created by oscar niemeyer to be built in spain and, in his own words, it will be the most important of all his european designs. it will be ‘an important asset’ in the city’s candidacy for european capital of culture in 2016.

oscar niemeyer is currently is working on construction plans for a 60-meter-high tower in niteroi, a city 15 kilometers (9.3 miles) from rio de janeiro, and on the arab-south american library in algiers. the library should have two main buildings, should be in a high area, with a view to the sea, and should include an auditorium, exhibition room, restaurant, square and apartments for researchers.