I think when I wake up. I get up very early and I have a lot of energyand I get a chance to read quietly and be by myself and think and so to me its the best time.

I listen to various things. here in the hotel we’re listening to early records of caruso,we were talking today about listening to wagner, I go to the opera – so we see rossini,bellini, mozart, but my favorite is wagner, the ring and all of the others.

I have a variety of books on my bedside table. I read fiction at the moment.I read mystery writers. at princeton I’m reading jacque derrida.I read many diffferent kinds of things. we have 2 cats. we have 2 children and the pets belong to them.my children have always had cats.I tolerate the pets.

I have a studio, my office is like an atelier, and I have a desk in there.I don’t have my own office, I sit in the middle of my studio- we have 20 or 30 people – and I am able to listen to what’s going on.I have no private telephone… it’s where I do all my work, my drawing, my thinking,I work with my people, make models, I say I want this, let us do this,I look at their computers, I think things and I write things, I’m with my workers all the time.

when you were a child what did you want to be?

did you always want to become an architect ?

no never. I didn’t know what an architect was, I didn’t know there was such a thing as an architect till I went to college. I never wanted to be anything because I didn’t think anything, know anything. I was a nerd. I was nothing, nulla, niente.

yes, all the time, like leon krier today we had lunch, or raphael moneo, philip johnson.I talk to young architects, I’m always talking with people. jeff kipnis, mark whitley, robert stern…many many people I talk to and exchange ideas with.

berlin’s holocaust memorial by richard serra and peter eisenmanthe memorial consists of 2700 concrete stelae on a large site in the very center of berlin, right near the ministries and parliament (reichstag). if all goes on schedule it will be dedicated in january 2004

describe your style like a good friend of yours would describe it.

one can never know at the same time what is the condition of society, its so-called ‘zeitgeist’, and how architecture should respond to it. one has always had to go outside of architecture. I have had to do so in order to address the question of ‘what should I do?’ and I would argue that philosophy is one of the most readily available.let’s put it this way, in any time architecture has 2 roles. it either reflects society, or in a sense is a precursor- not revolutionary, not radical, in between reflection and radicality – that is something I would call a precursor.thinking about something that might disturb something in the present. I think that my work is more like disturbance, rather than change, a radical change. its certainly not reflection. I would say disturbance, precursor, premonition.

the project that will be most interesting for most people of my work.even though its very different from most of my projects is the holocaust memorial in berlin.this is a controversial subject and a controversial project, and I think that when it will be built, it will be… I don’t know what it will be like,but its going to be very interesting to have it built. of the projects I’ve built,I think probably the wexner center is one which gives me a lot of good feeling and still remains a very didactic work.but I think in one’s lifetime, maybe one can do 2 or 3 canonical projectsthat are precursors of something else.I think the wexner project was one, and I think that the holocaust project could be another.and of course anything that is successful in terms of being a precursor.

oh, I appreciate many architects. from the past, I love palladio, I’m doing a book on him,and piranesi, I like le corbusier, terragni, my book on terragni is finally coming out. I have many architects.

and those still active? are there any particular ones you appreciate?

I really respect leon krier, although I disagree with him a lot, we are very good friends,also moneo…

any advice for the young?

unless you are really committed to being an architect in the true sense of the word,its a terrible business and I wouldn’t recommend it for anybody, unless you need to do it for some personal reason, I would say go into business, go into law, medicine, but don’t be an architect.

death. I’m scared to death, not to be forever. I don’t worry about money, work, anything else, but I can’t come to terms with the idea of going to sleep one night and not waking up. It’s the only thing I worry about, and I have to not think about it, because I would go crazy.being dead is an awful thought. that’s the only thing, everything else is fantastic.life is unbelieveable, even things that go wrong, I don’t worry about anything because I know that I’ll get to my coffin, I’ll be able to get in, they’ll put a lid on it, and I know I’ll get there and every morning I get up and I say I have my whole life in front of me and it’s true, and that gives me great joy and great hope and happiness.that’s what sustains me. 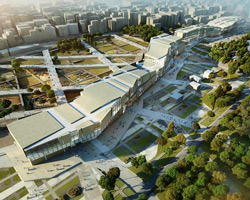