already with 47 australian institute of architects awards to his name, peter stutchbury was awarded the australian institute of architects’ gold medal in 2015, joining the prestigious ranks of glenn murcutt, richard laplastrier, and many more. it is no wonder though as his self-named studio has been creating innovative, environmentally attuned buildings, as magnificent as the landscapes they are situated in, for over 30 years. as a result, his practice has been described as ‘mastering the art of creating architecture that speaks of the place it inhabits’ while being structurally striking and expressive in character. 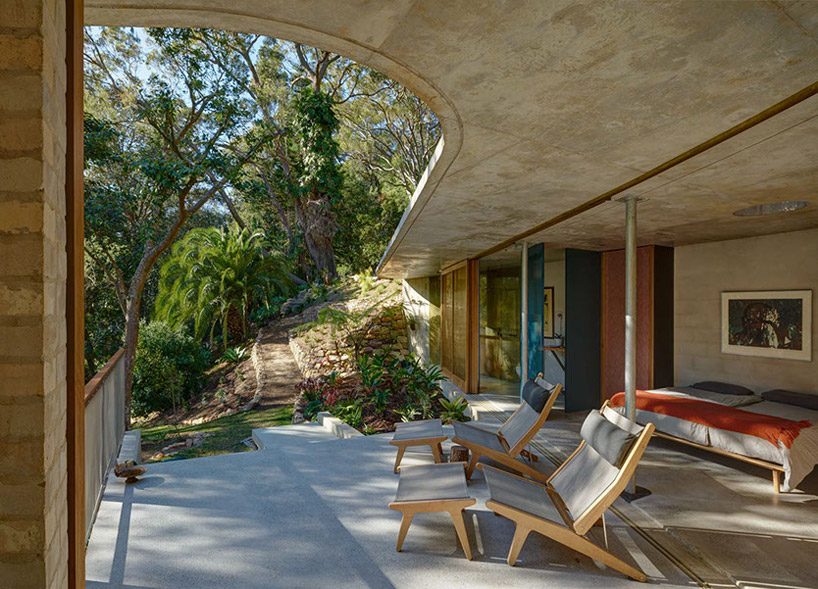 although with a diverse portfolio of building types, it is his residential work that truly highlights his daring design principles. sprouting up across the country, most specifically in new south wales, each one is so different to the next. from idyllic surf shacks that step on to white sand beaches, to city escapes that appear as sanctuaries of special shapes, and from tree-top houses that sit in the most luscious of dense jungle, to cliff-top mansions atop glorious mountain ranges, his work fundamentally masters the landscape without trying to match or overpower it. the balance of his designs aim to deepen the connections between the clients and their locations.

below, designboom showcases just a few residential projects that highlight the principles of peter stutchbury’s architecture. 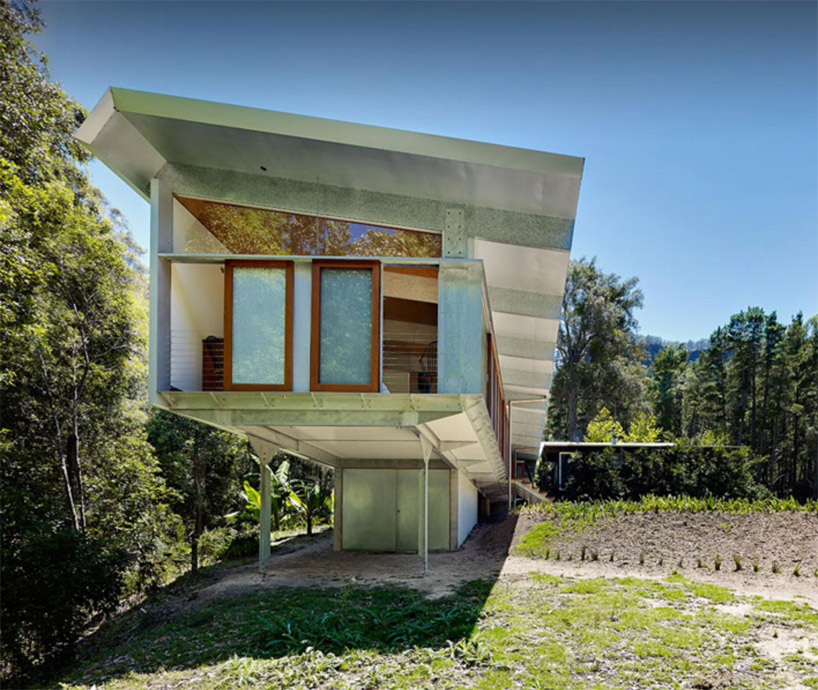 completed in 2012, the ‘invisible house’ is perched atop the western edge of new south wales’ blue mountains, looking out across the unique landscape. its picturesque position comes at a price though, with the property experiencing strong cold winds in the morning and scorching heat during the afternoon sun. as such, the building has to withstand the environment’s most extreme elements and so, sits hidden below the brow of the hill – as its name suggests. 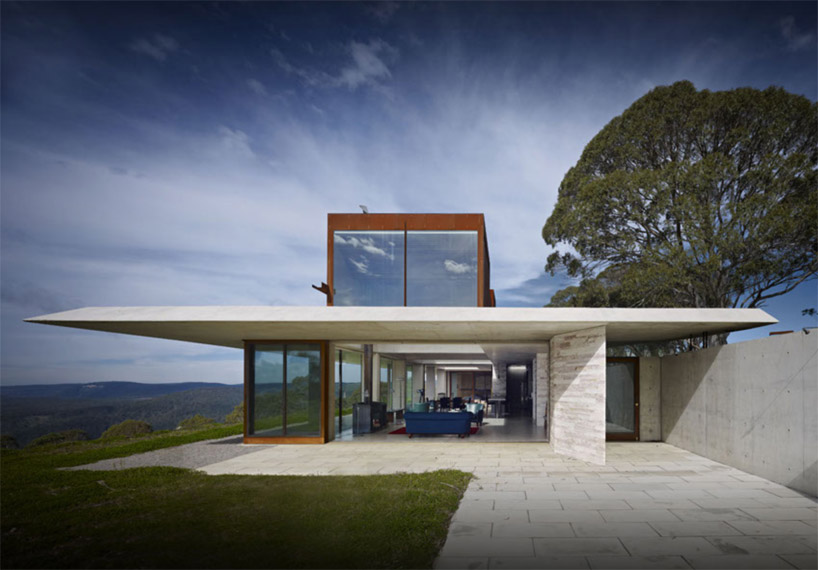 with the site selected, the design for the ‘invisible house’ sourced data from its surroundings to mathematically form a sculptural shape that although different, does not feel foreign to the location. it is defined by a large, cantilevered concrete roof, which acts as a platform for smaller copper-clad rooms above the main floor and the hillside itself. below, situates the living spaces of the home, where residents are offered uninterrupted views across the australian mountainside. 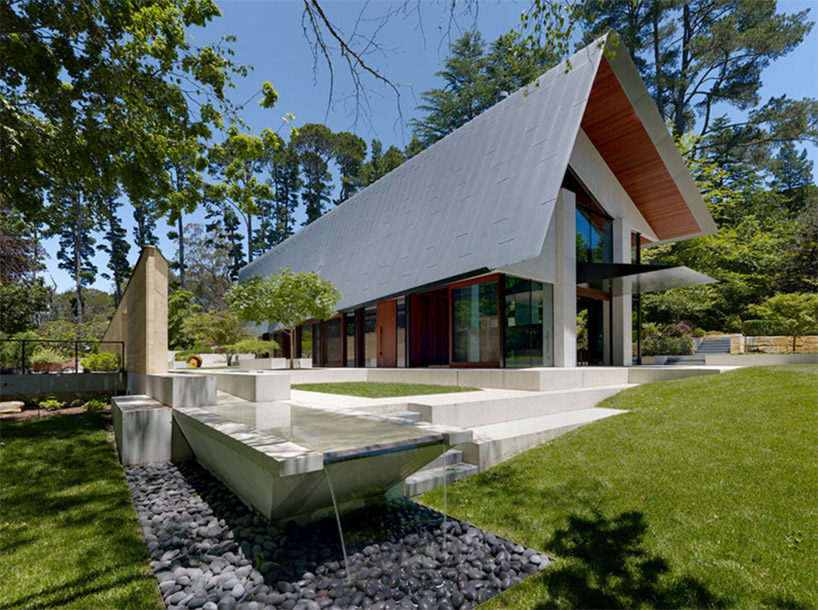 completed in 2014, ‘pirramimma’ is also located in the blue mountains, but more so within its green valleys than overlooking them. highlighting peter stutchbury’s ability to balance the relationship between building and landscape, the house, seemingly straight forward from the front, transforms into a uniquely shaped shade from the side profiles. its curved, zinc roof not only acts as a shelter but actually creates brief moments of intense light thanks to its skylight. this connection is constantly apparent with the abundance of glass windows that contrast with the concrete structure and wood veneered interior. it is these juxtapositions of moments of intensity and quietness, light and shadow, and openness and shelter that completes the connection between the residents and the landscape. 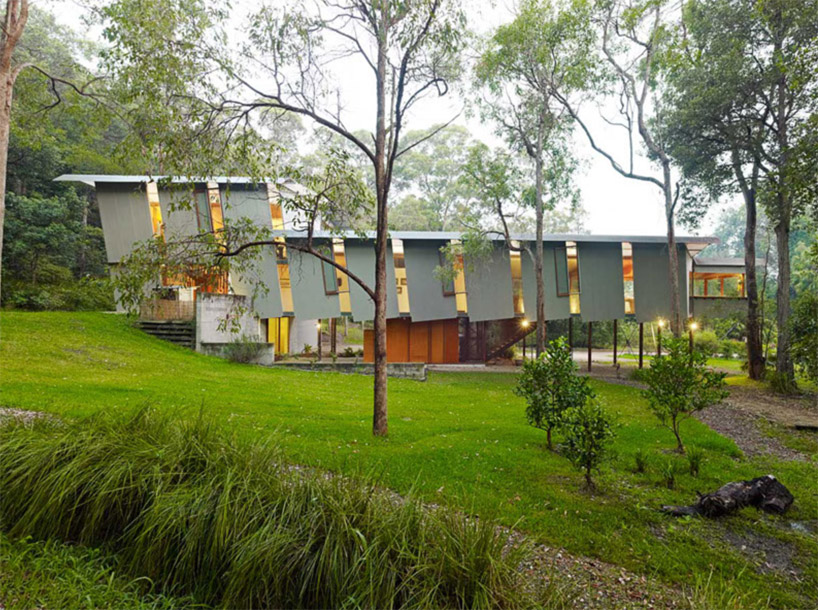 built in the bushlands of bayview in 2004, the ‘verandah house’ considers three primary concerns: coolness, heat and privacy. with a concrete platform that is elevated towards the tree top canopies, the building’s design twists from vertical to horizontal with a wrapping of metal. it creates an open-walled, semi exposed interior that is inconspicuous to the neighbors whilst above the dampness of the ground. the form also controls the sunlight drawn and reflected inside, whilst allowing a breeze to navigate through whilst rolling down the hillside. 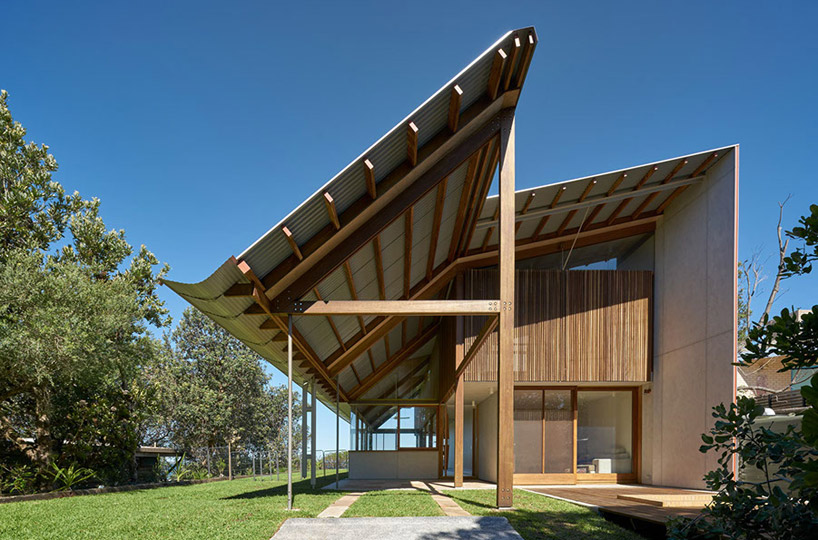 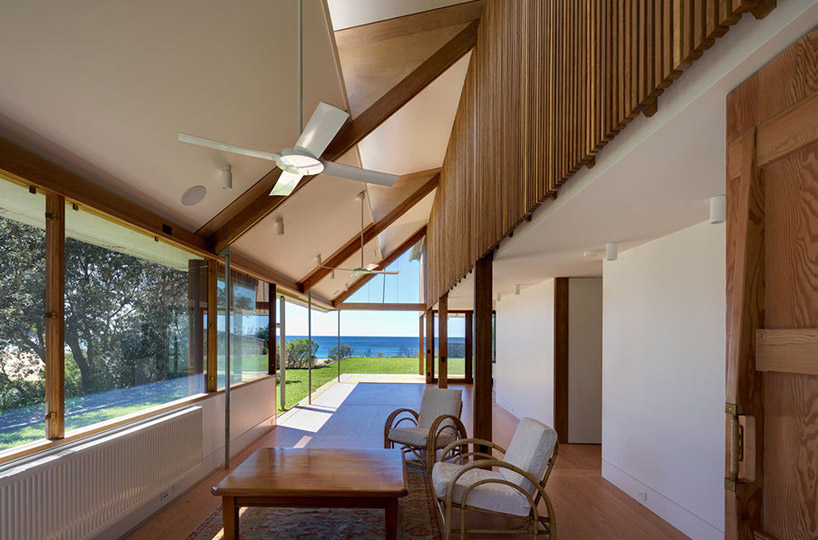 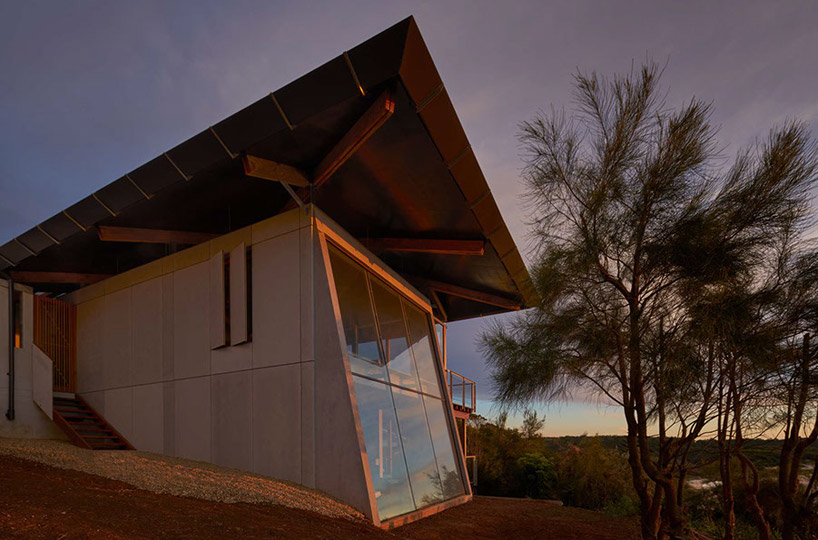 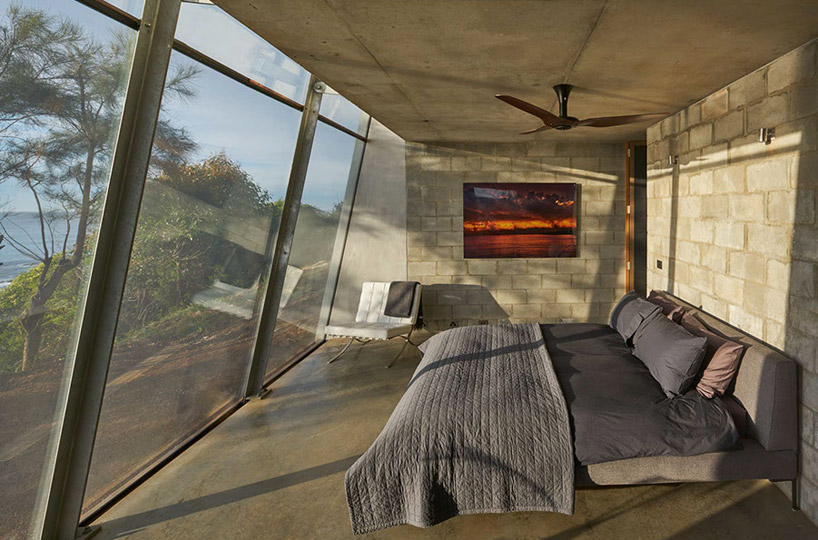 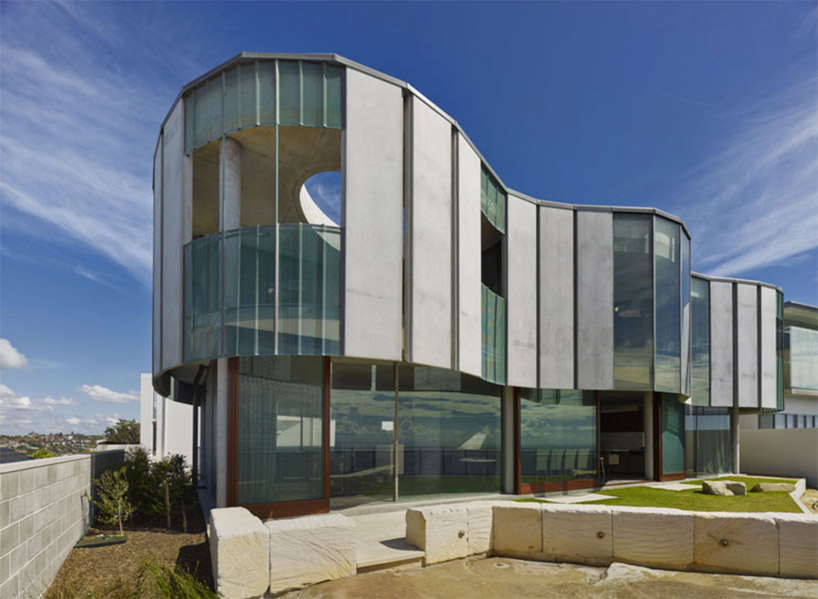 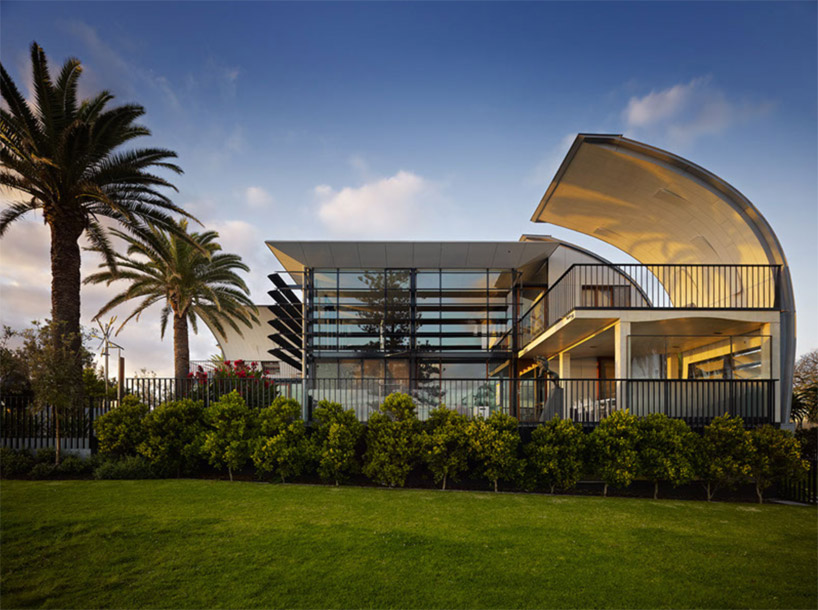 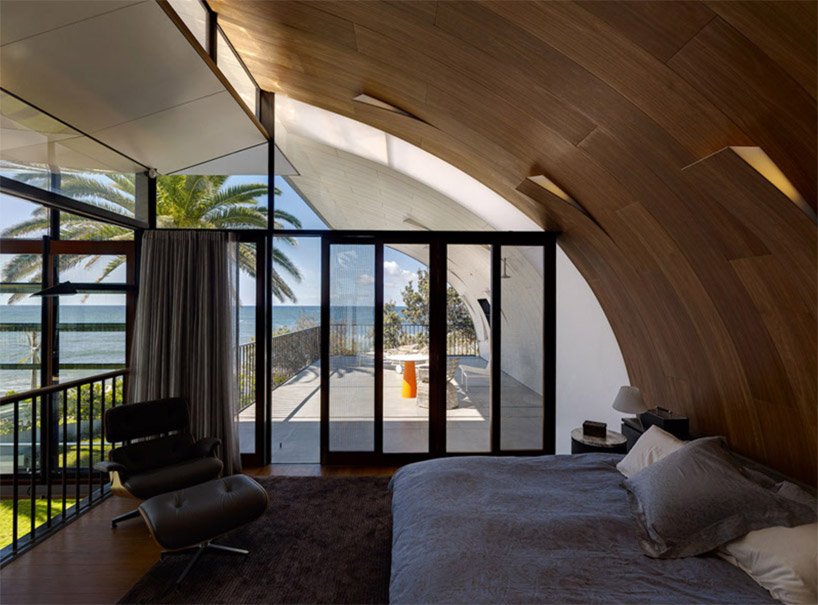 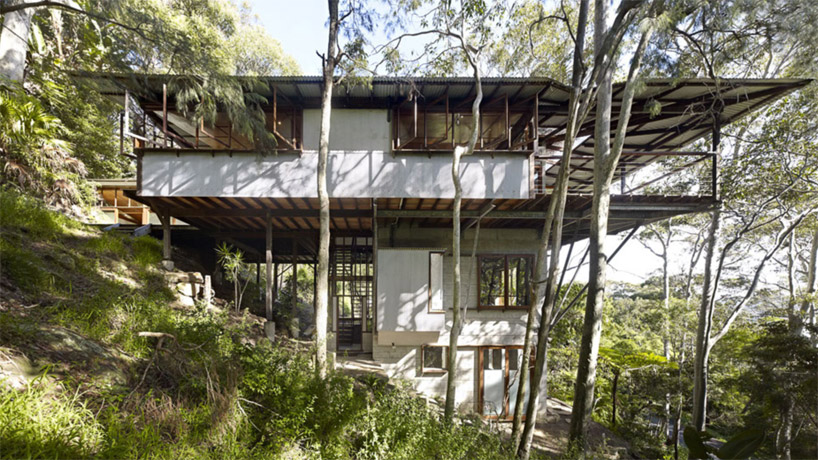 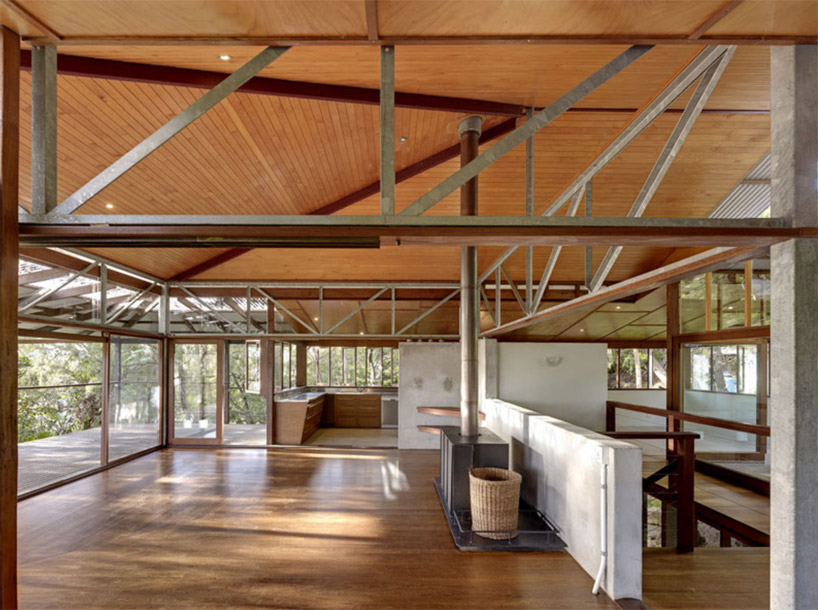 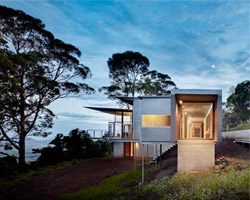