oregon state university will see the expansion of its reser stadium, the result of a collaboration between populous and SRG partnership. the project will transform the stadium into a ‘best-in-class’ football facility with year-round amenities accessible by all students, athletes, faculty and staff. the two firms are working together with design-build partner hoffman construction to leading the project whose design prioritizes the fan experience. 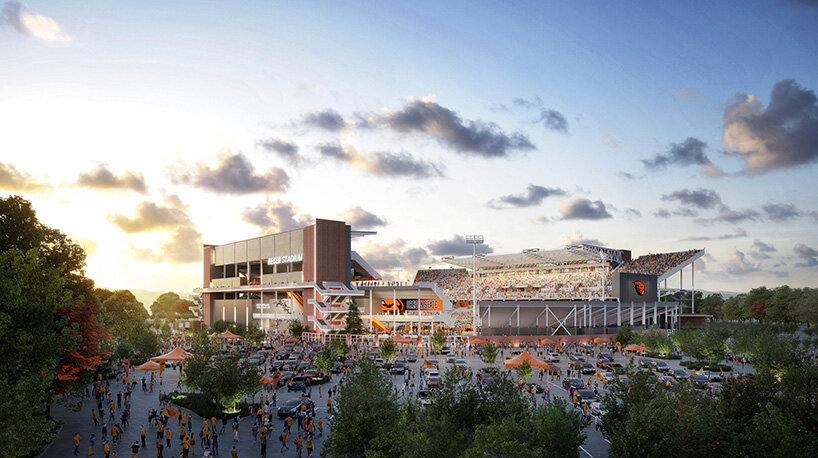 the west side of the stadium by populous (see more) and SRG partnership (see more) will be entirely rebuilt to feature a 360-degree concourse. this design was influenced by oregon’s breathtaking landscapes that invite exploration and discovery. the new concourse is a first-of-its-kind in collegiate sports facilities, flipping the traditional design of a football concourse with all amenities arranged so fans have an open-air direct view of the field.

an homage to the school’s mascot, the expanded ‘beaver street’ concourse will serve as a crossroads, connecting the south seating bowl and the existing open air north terrace with design details often found in an urban streetscape. the new concourse will connect the full perimeter of the stadium and unify the fan experience. 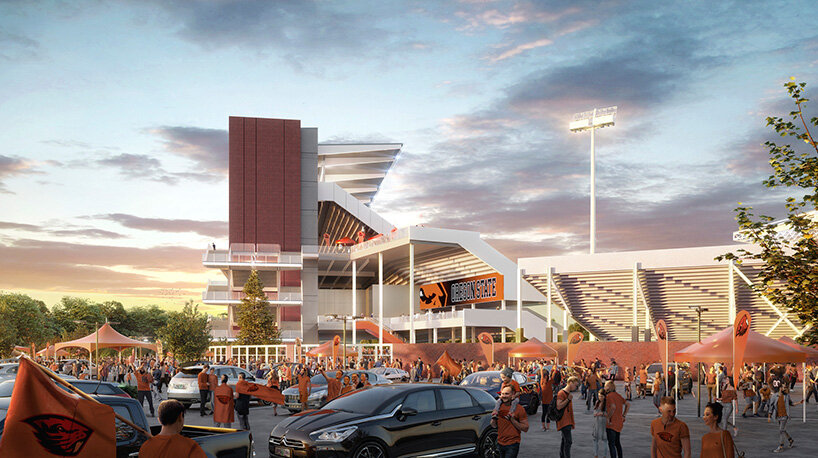 along beaver street, fans at oregon state’s stadium will feel the vibrancy and richness of human interaction through a thoughtful design that encourages exploration and mingling, including soft seating areas, high top tables, drink rails and other various non-ticketed seating options. the concourse provides protection from the rain while still honoring the open-air intent.

concession areas are reimagined to have a storefront appearance, evoking feelings of walking along an urban streetscape while also paying homage to the food hall culture popular throughout the pacific northwest.

traditional walkup windows have been replaced with fast-casual dining and self-service grab-and-go stores. food and beverage offerings are overhauled to reflect the osu fanbase through familiar local restaurants and regional fare. 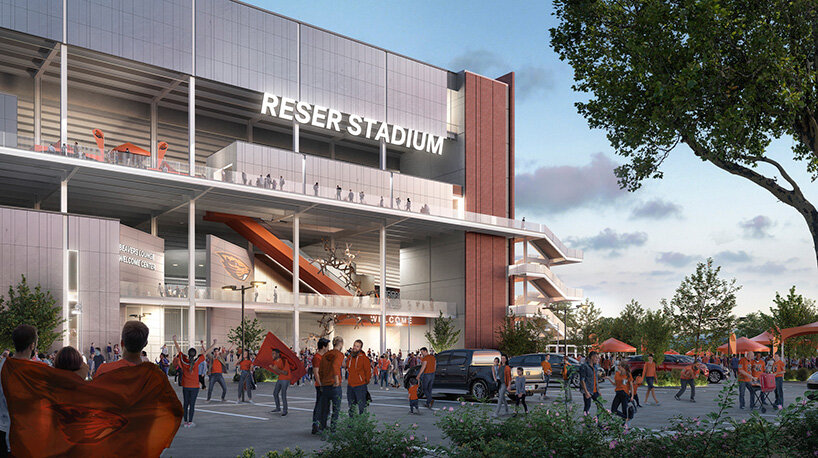 the lower level of the west side deck will house the new OSU welcome center and serve as the first point-of-contact for prospective/visiting students and their families. the center is vertically connected to the stadium’s club spaces, allowing the club to function as a true multi-purpose event space for OSU and the greater corvallis community. further enhancements to the game day experience include new locker room facilities for visiting teams and a new press box structure that modernizes in-game and broadcast services. 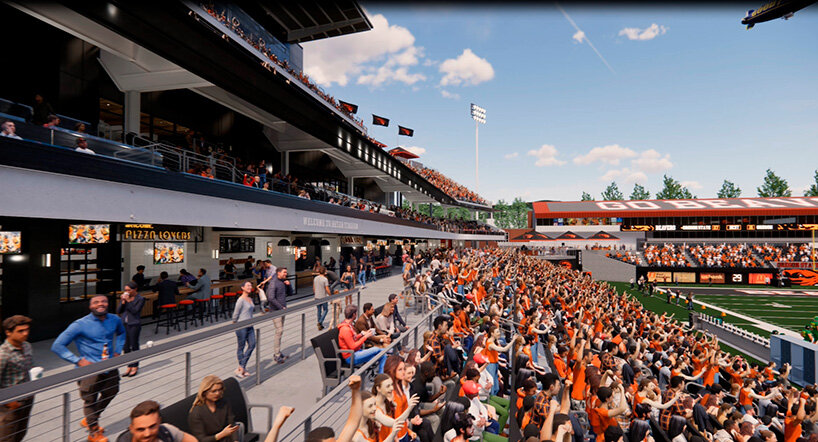 contributing to oregon state university’s goal for reser stadium to provide year-round programs, an approximately 32,000-square-foot wellness clinic addition will be located on the southeast corner of the stadium at a prominent connection point to campus.

the new four-story facility will provide whole-student care, including primary care, counseling, and laboratory services. OSU is currently considering leasing a portion of the building to a community health partner who would offer primary care and urgent care services to faculty, staff, and the broader corvallis community. project competition is expected for fall 2023. 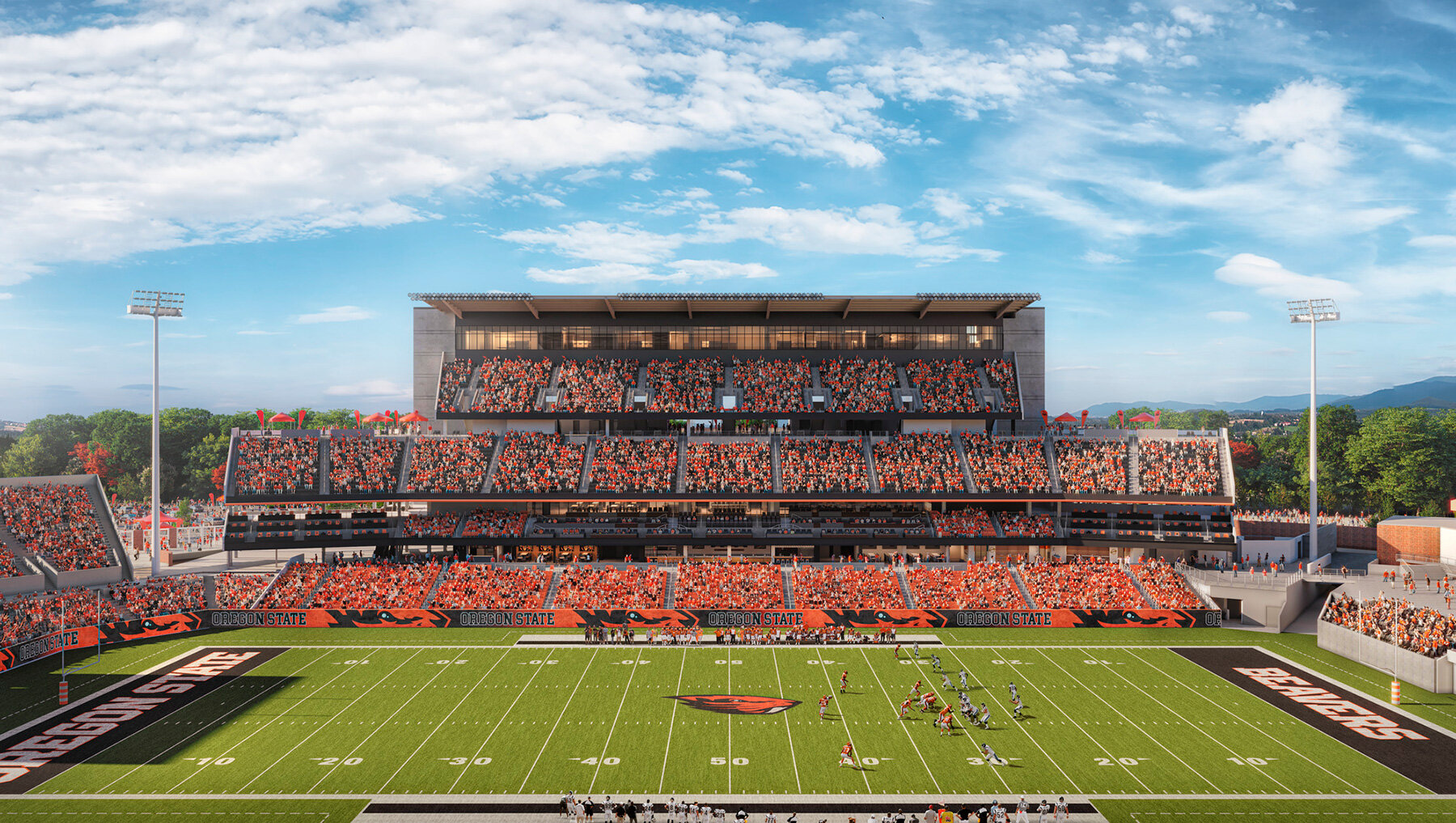