populous has proposed the winning design for the main stadium of the 2014 incheon asian games to be held in south korea, and will illustrate a new level of sustainability with their design. the stadium will have the capacity to hold 70,000 people for games, and after the main event will reduce down to a single-sided grandstand for 30 000 afterwards as a people’s park for the city of incheon.

currently, incheon is one of asia’s fastest growing cities and the multipurpose stadium will be the  first landmark building people see when travelling to seoul from the incheon airport. 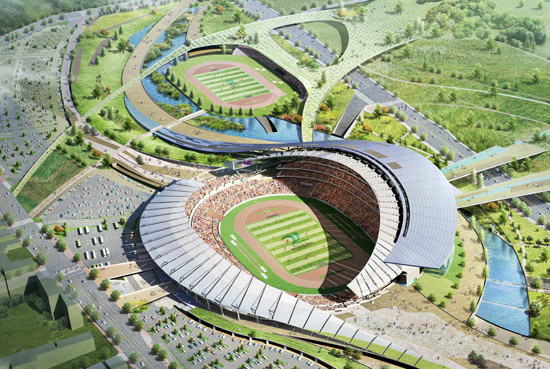 ‘the stadium design is based on an asymmetrical configuration with the main corporate and management facilities located on the permanent western side, creating a more efficient design, both in terms of construction and operations. the eastern side will be a lighter solution, the temporary modular seating structure will disappear after the games, and the stadium reduce down to the single sided grandstand. the building will link into the surrounding parklands; integrate into the landscape, provide an open accessible gathering place for the people of incheon. the roof of the temporary stand becomes the canopy roof of a new post games retail component, containing shopping mall and supermarket and multiplex cinema chain. the shell that housed the broadcast component, pre game function spaces and site management of the temporary event is replaced with vibrant commercial space afterwards, creating a seven day a week attraction for the local community,’ said andrew james, senior principal at populous. 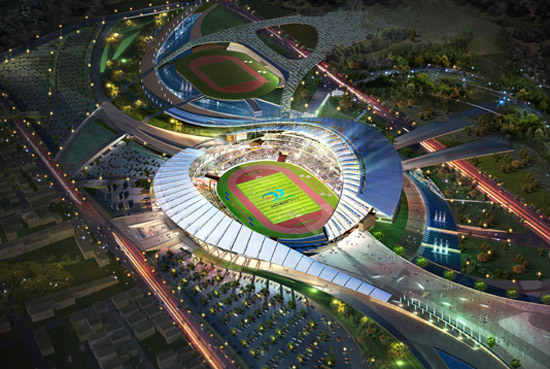 symbolism is very important in korean culture with music and dance being part of everyday life. the traditional buddhist ritual dance, the sung moo monk dance provides the image which will be reflected perfectly into the architectural drama of the stadium through flowing forms, sweeping lines creating movement. the representation of yin and yang is also present through the complementary opposites of the masterplan – permanent and temporary sites.

the stadium’s sweeping lines blend into the surrounding landscape

‘although the western stand is permanent; the main façade will be designed to be lightweight and flowing like the monk’s robes composed of an undulating, translucent material, a lightweight metal or fabric mesh, an articulated skin, reflecting the sun and the movement of the sky. the organic form of the metal and fabric roof will appear to float above the stadium, merging with the landscape at one end, the plaza at the other. the movement and form will be repeated in the material of the temporary roof on the eastern stand, creating a unified image, reinforcing the dynamic movement of the dancer,’ says daekwon par, populous project designer 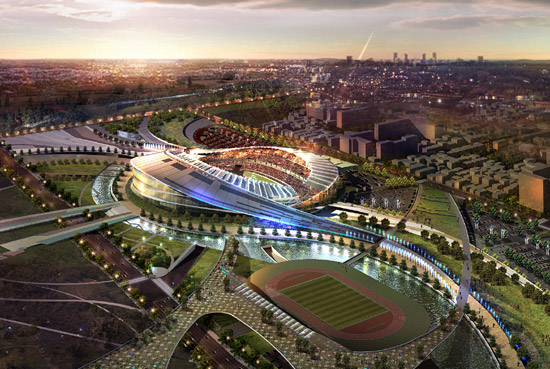 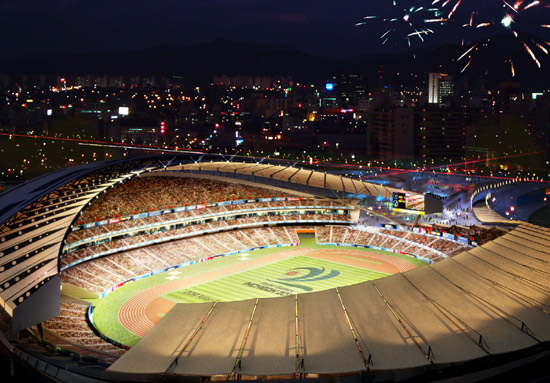 the stadium by night 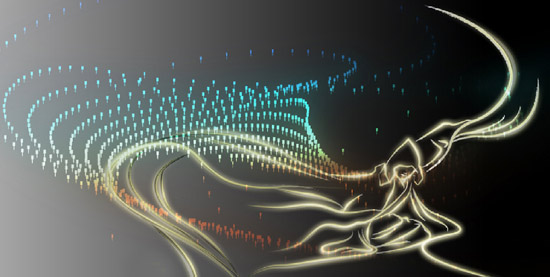