situated at the marina square in singapore, this herman miller shop-in-shop at XTRA’S latest flagship store includes an intriguingly massive structure coined ‘fabricwood’ and completed by design director pan yicheng from PRODUCE. occupying a twenty meter long by seven meter wide space, a plywood surface stretches across the entire site like a sail of tensile fabric, with symmetrical qualities that take on the proportions of the herman miller logo. the minimal surface, which reminds one of german architect and structural engineer frei otto’s soap film experiments, contains a series of arches that frame the entrances and connections to the rest of XTRA, the street and the adjacent café. 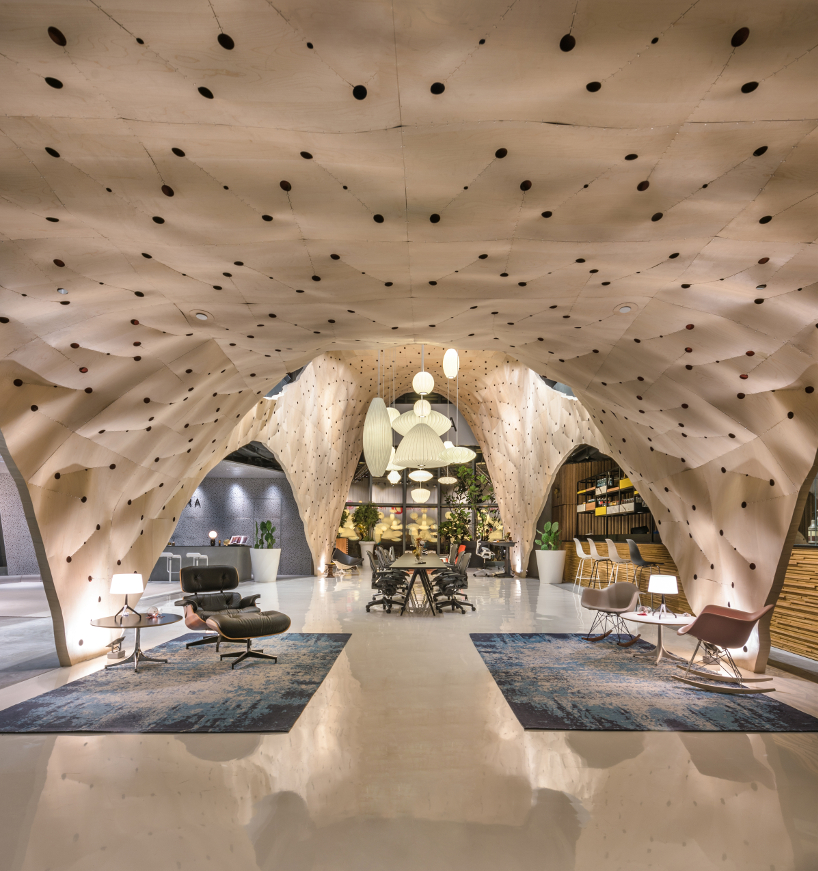 after extensive research for this project, pan yicheng from PRODUCE has been motivated by herman miller’s structural and material innovation. indeed, the brand’s use of moulded plywood offers light and elegant furniture, while the study of comfort and ergonomic for their working chairs results in an elastic mesh material stretched at the back of the furniture to create a doubly curved and frameless suspended surface that supports a full range of seating postures. 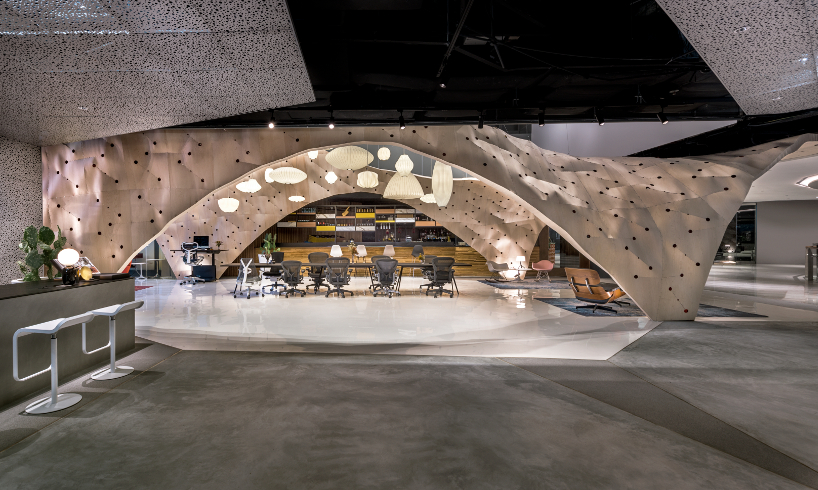 being an established furniture and lighting retailer brand in singapore, XTRA‘s idea of a shop-in-shop reflects its desire to showcase a wide range of herman miller products in a space with ‘flagship’ capacity. hence, the lightness and warmth of plywood has been combined with the geometric rigor and technological innovations of the work chairs. blending formal, structural and material qualities, the solution seeks to develop a soft and porous ‘skin’ for the herman miller shop-in-shop that is ‘moulded’ to its host. 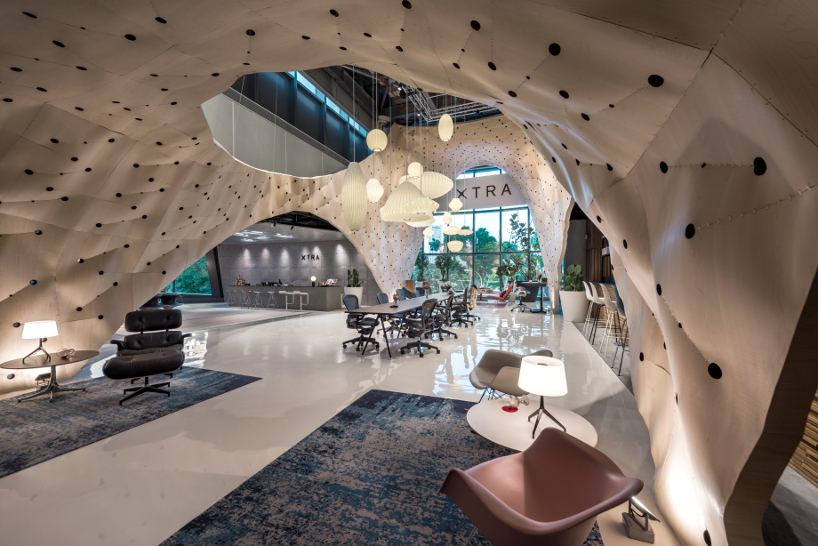 at closer view, the plywood  appearance of softness like a sail caught in the wind

this is pan yicheng’s second effort at an XTRA herman miller shop-in-shop. the former version has been executed for the previous XTRA park mall flagship store in 2012, and the design has won the prestigious world architecture festival retail category award for 2012. while the first version has been shaped using a mesh geometry that stitches together an array of differentiated triangular plywood panels, fabricwood shapes the plywood using a tailoring technique called darting – more demanding to conceptualize and prototype. 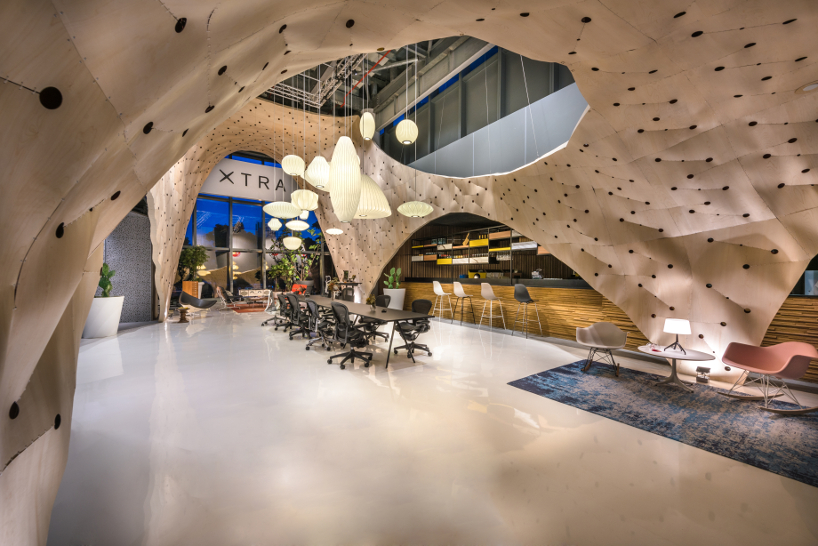 rippling on the surface increases the appearance of softness

originally used for shaping fabric to fit the human body, pan has exported the technique of darting onto plywood. the darts and their respective angles determine the eventual curvature when closed. circular cut-outs are used at converging points of darts to allow the plywood to bend and avoid tears. when assembled, fabricwood forms a naturally undulated surface. the most challenging part of the project has been to translate flat pattern drawings into three-dimensional modelling and vice versa. a combination of the latest computer simulation techniques and physical modelling has helped achieve the desired curvature. the elasticity of the plywood has played a major factor in shaping the skin, while the dart angles have been re-calibrated to accommodate any changes to the plywood material. 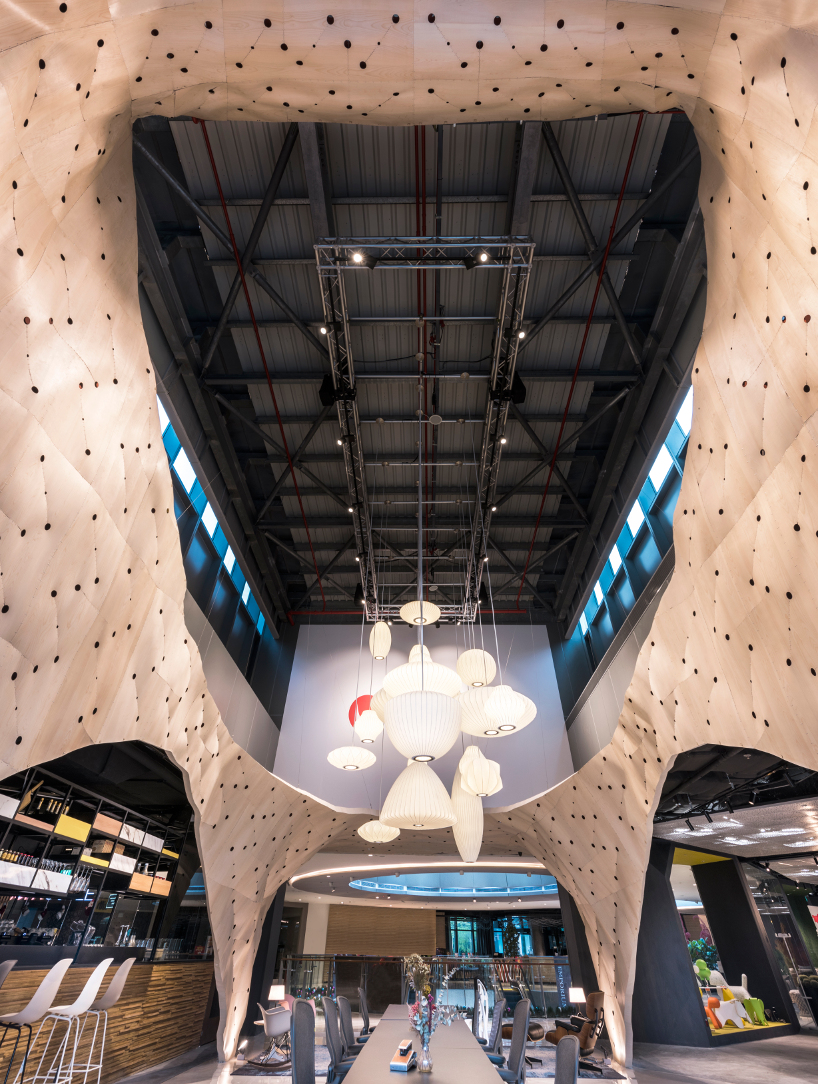 fabricwood is made with 280 panels of plywood 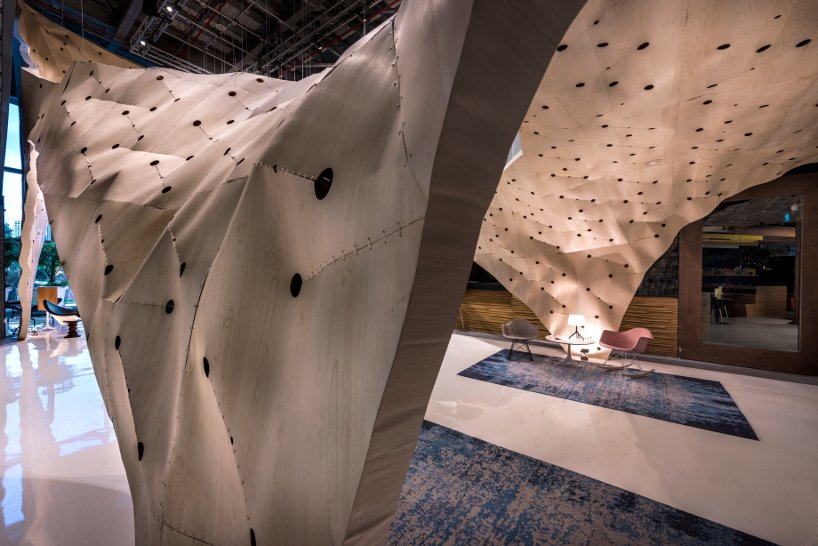 the circular cut-outs allow for tolerance on the surface 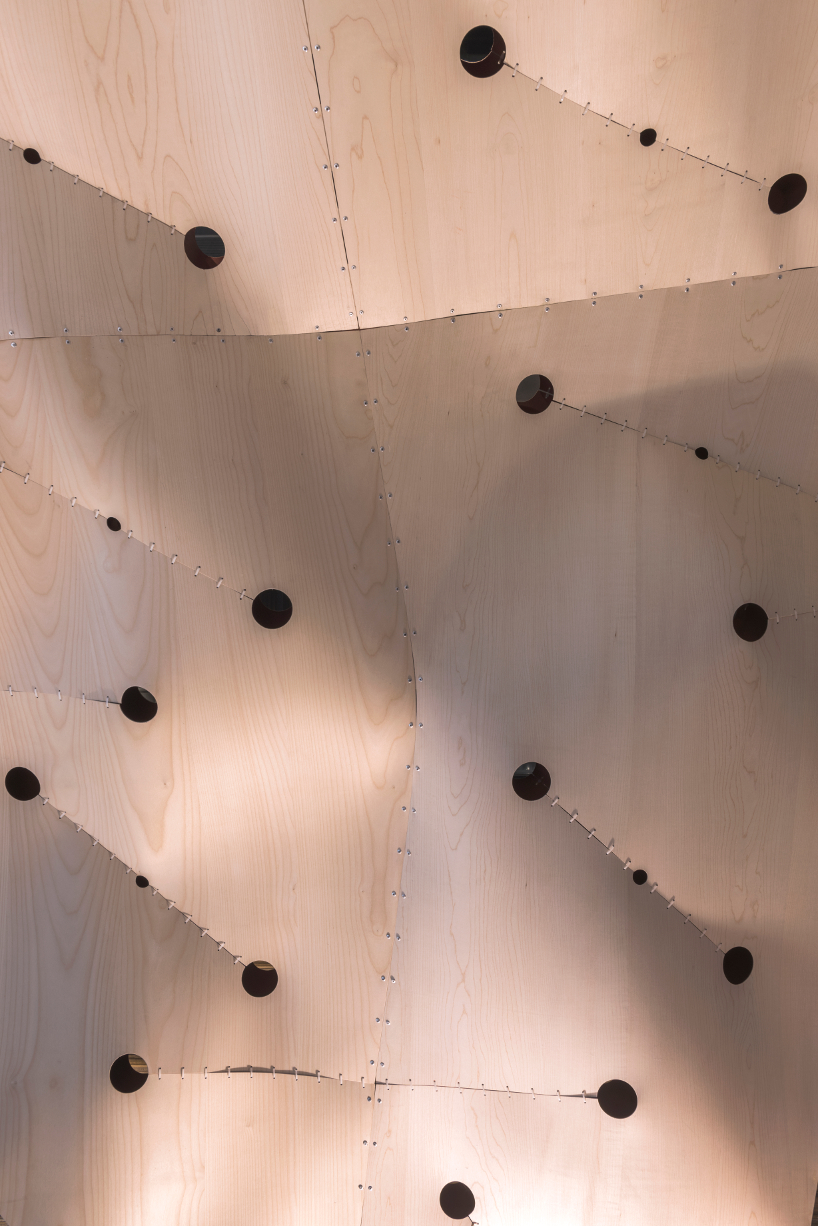 PRODUCE fabricwood: a close up of the internal and external darting technique 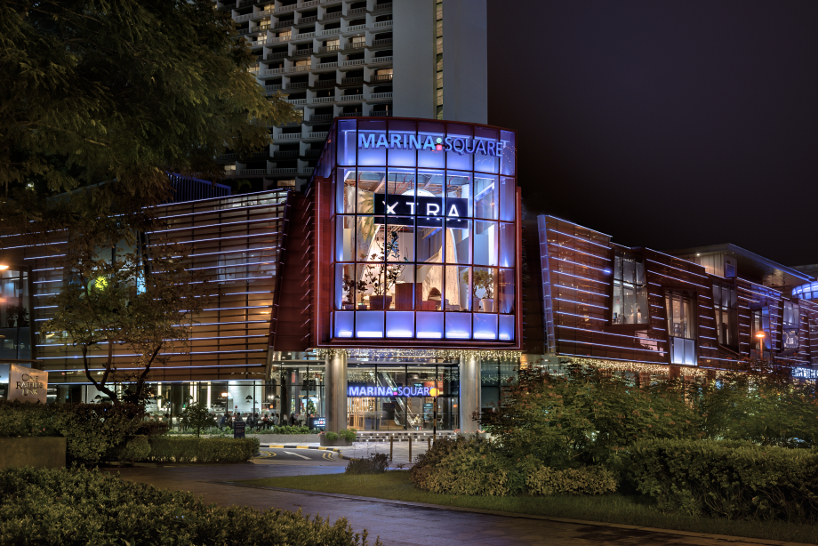 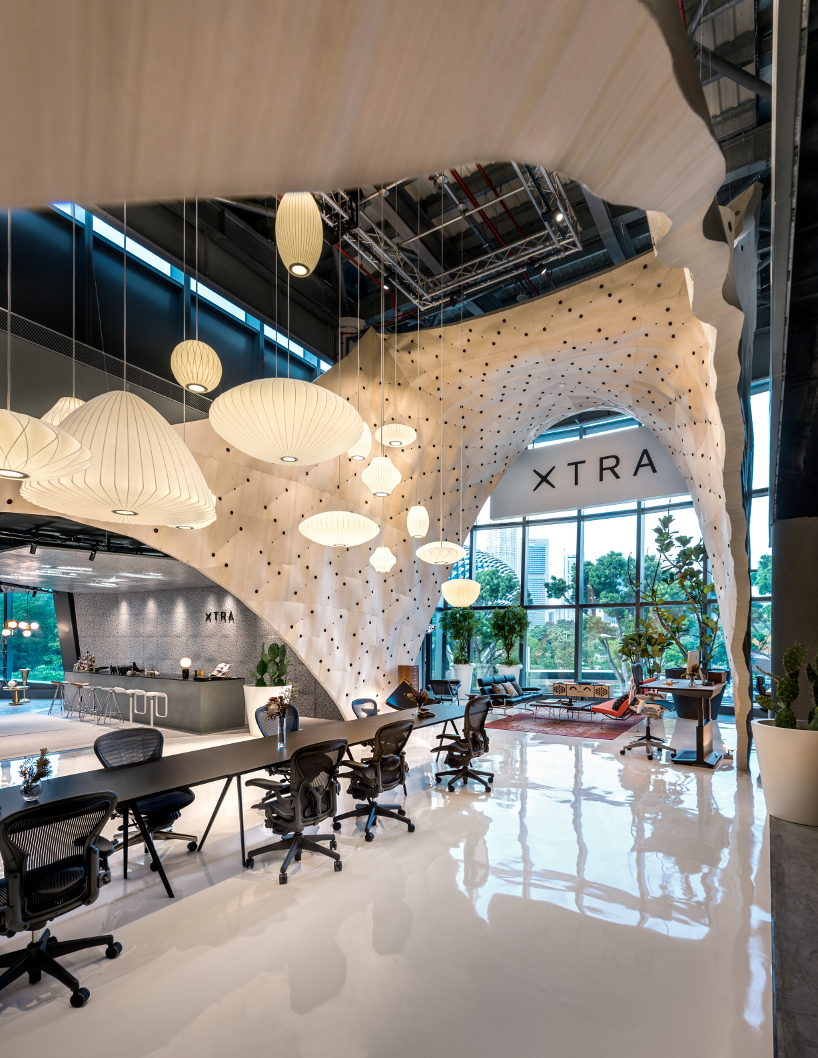 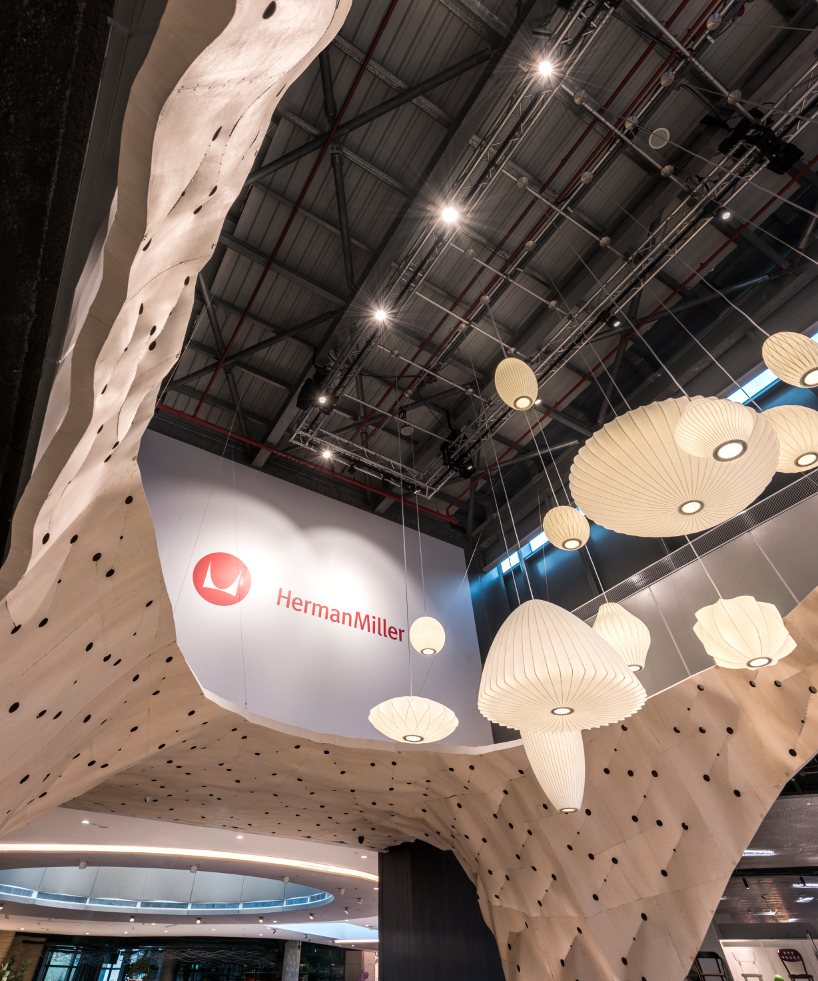 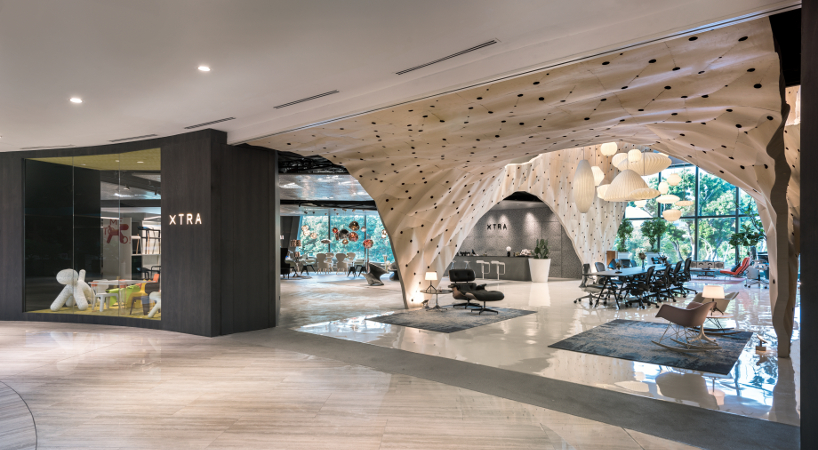 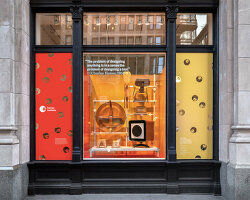 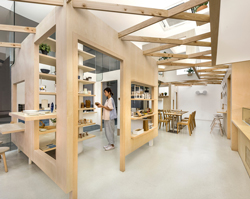 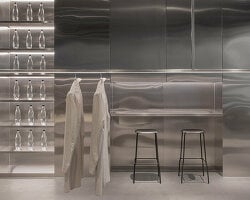