the transformation of this dominican monastery into a performance center and congress hall by slovenian architects enota, interweaves the varying building styles found throughout the 800 year old church. located in ptuj slovenia, the original structure was built in the early 13th century and has undergone a number of changes over the years, from its initial romanesque configuration, through several interim gothic phases to reach the current baroque form. after the dissolution of the monastery in the late 18th century, it served a number of uses – army barracks, a hospital, museum and also provided social housing, with each of these roles leaving a mark on the structure, due to the various extensions and conversions.

the integration of a new program sought to showcase the building’s historical value, while adapting to its future usage without any major, invasive interventions. converted into a congress and cultural center, the functions were easily applied to the existing layout. during the middle ages monasteries were the main venues for indoor public meetings, and the complex provides an ideal base due to the similarities in these activities. the main event hall is positioned in the elongated nave, while the remaining auxiliary spaces are lined around the cloister, a smaller hall in the old refectory and another in the previous working spaces. a new entrance hall features in the cloister, where it serves as a central node, connecting to the various circulation paths.

the formation of these fragile and sensitive environments is tied together through a spatial framework of black concrete paving. the neutral design of the new ‘carpet’ allows the restored beauty of the remaining wall surfaces to stand out, but still offers enough contrast to overcome the chaos found in parts awaiting renovation. during the demolition of the floors to construct the main event space, subsequent archaeological work revealed sepulchers, reredos, the remains of steps and flooring made from roman gravestones, which are presented ‘in situ’. consequently the new floor is raised to form tiered stands, acting as a spatial partition between the reconstructed baroque church and the structure of the previous gothic building. 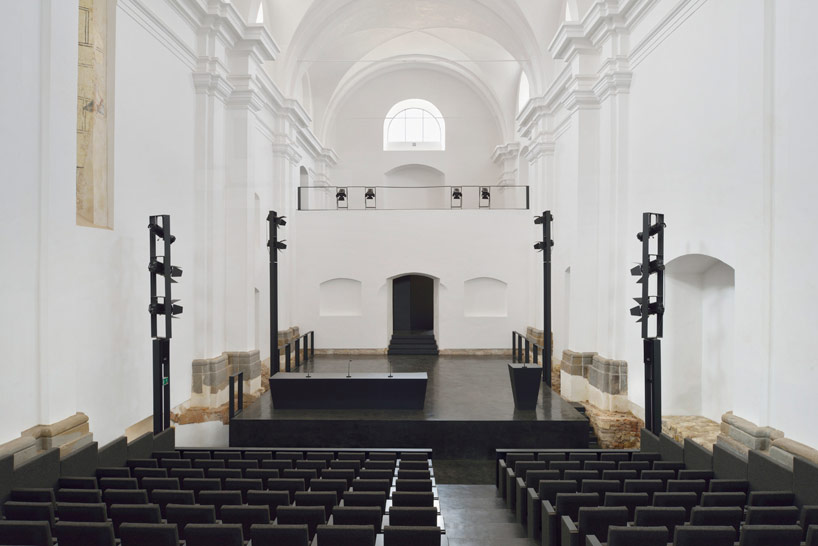 a gradual sequence of spaces is revealed along the staircase, that connects the seats. after viewing the archaeological finds, visitors are exposed to the floor plan of the gothic building from the first landing, newly discovered details of the medieval architecture from the second, while at the top a view across the baroque nave is eventually revealed. the contrast between the new floor structure and the historical monastery is most apparent in the main hall, with the use of black and white that reflects the dominican order where white is the symbol of innocence and black of modesty. 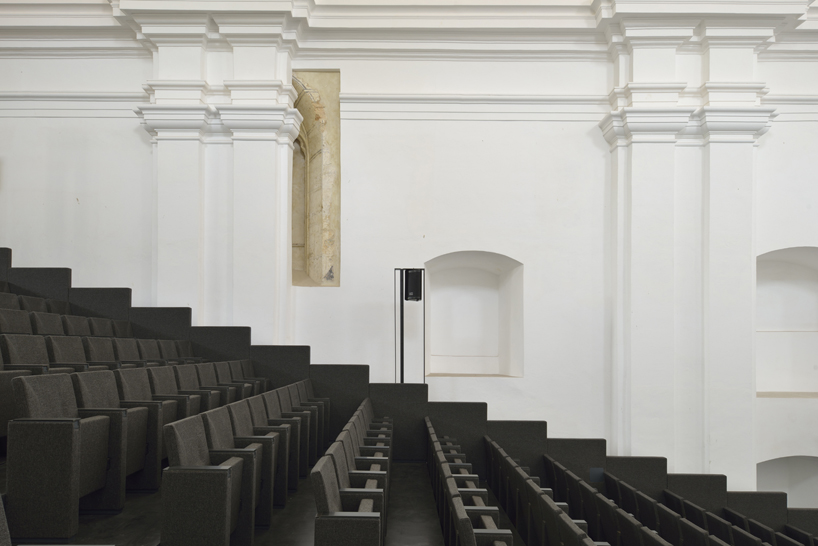 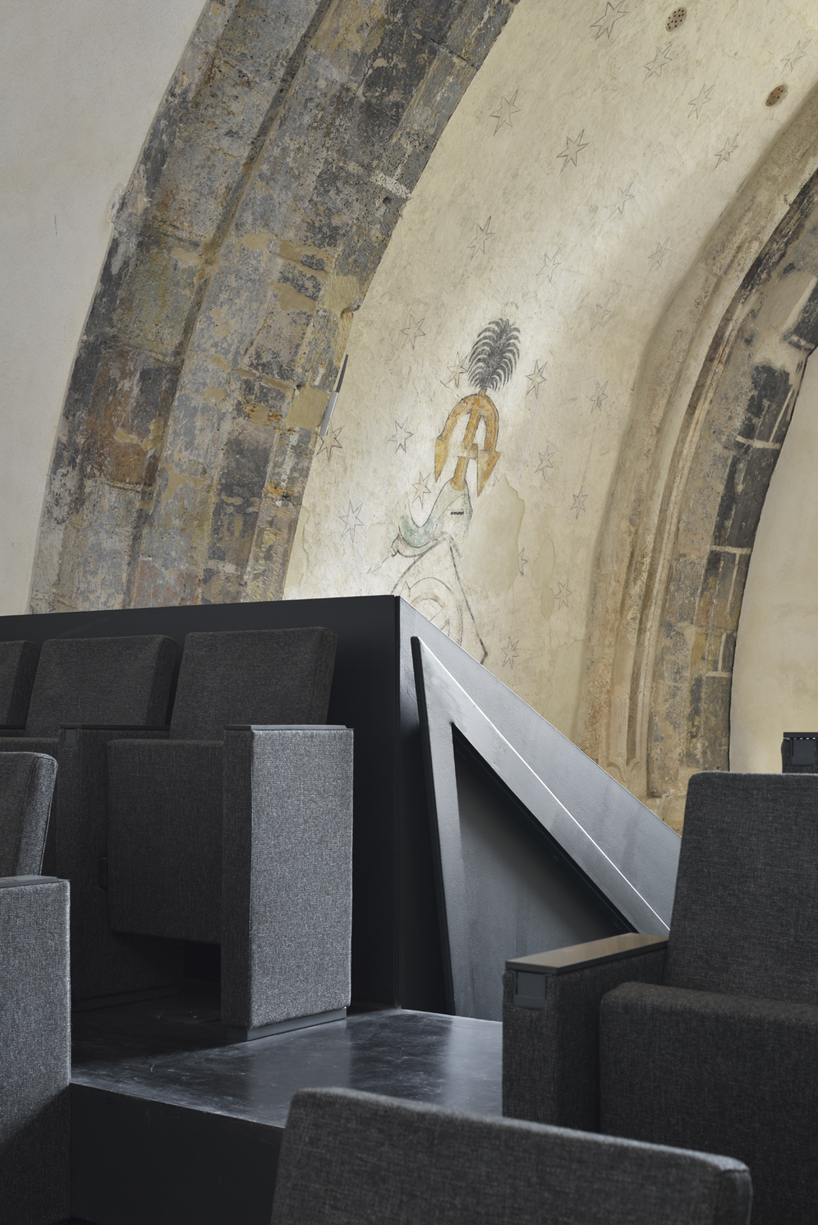 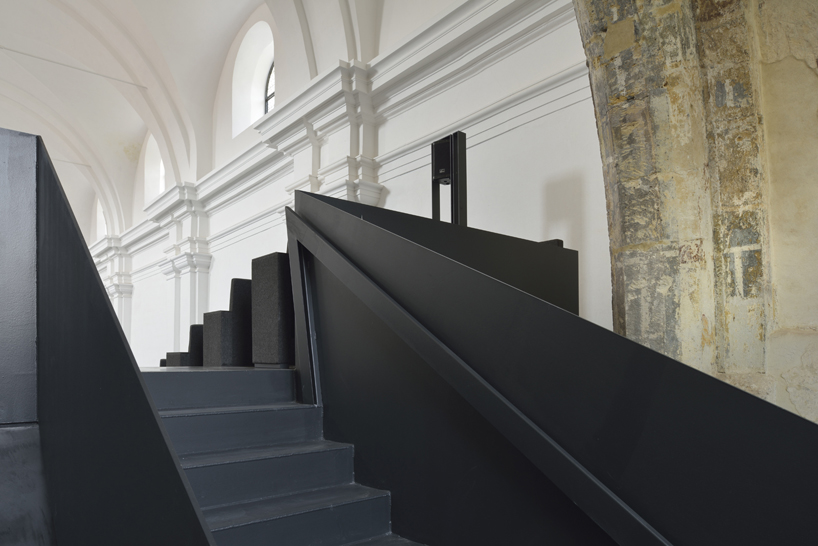 a black staircase follows through a succession of different spaces, eventually providing a view over the baroque hall
image ©  miran kambič 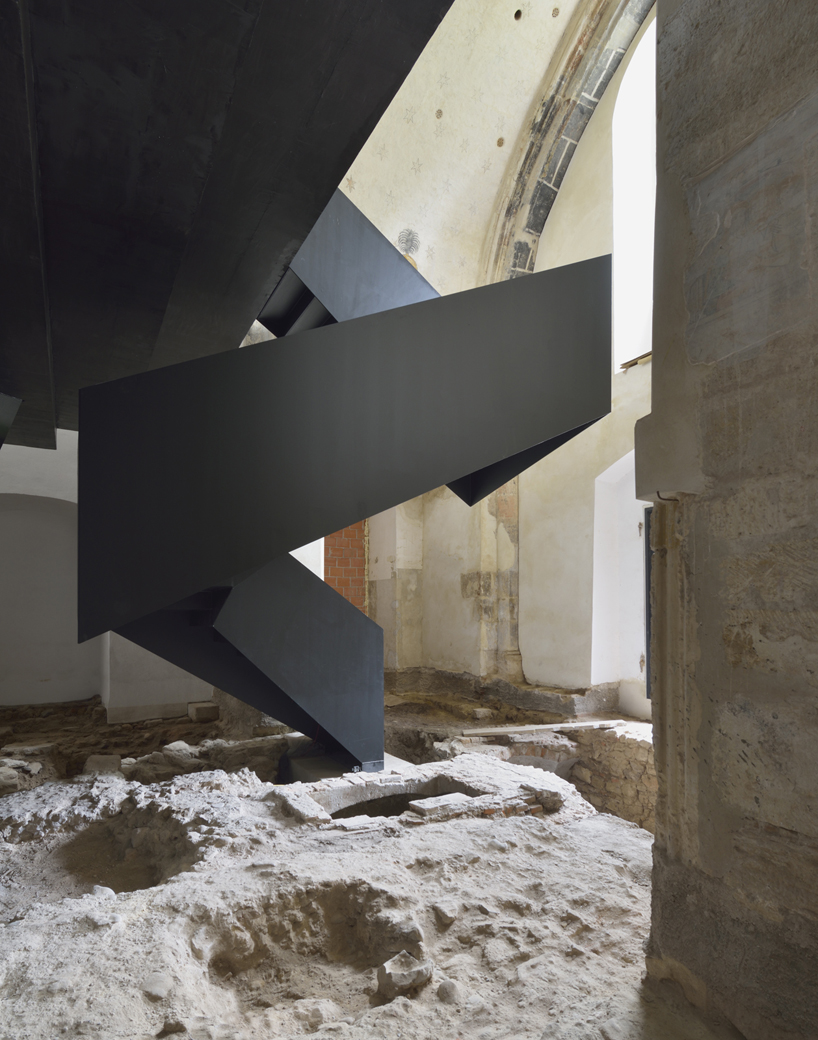 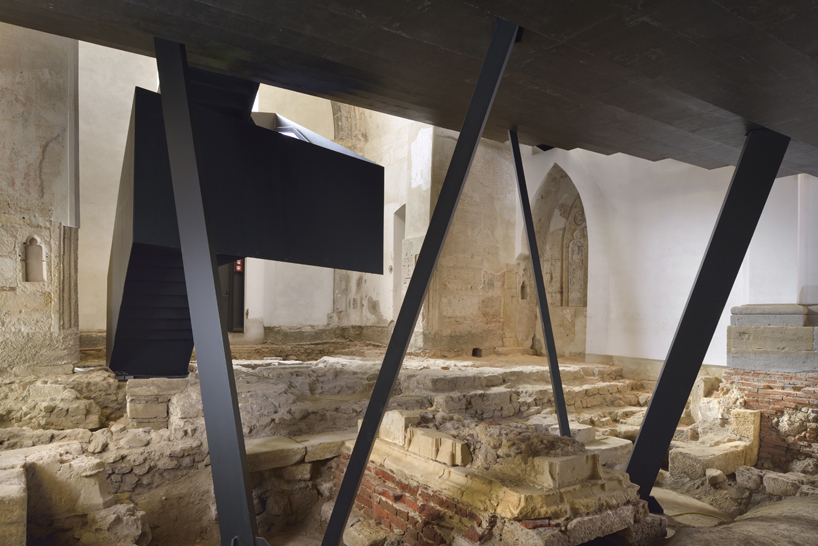 archaeological work revealed sepulchers, reredos and the remains of steps and flooring made from roman gravestones
image ©  miran kambič 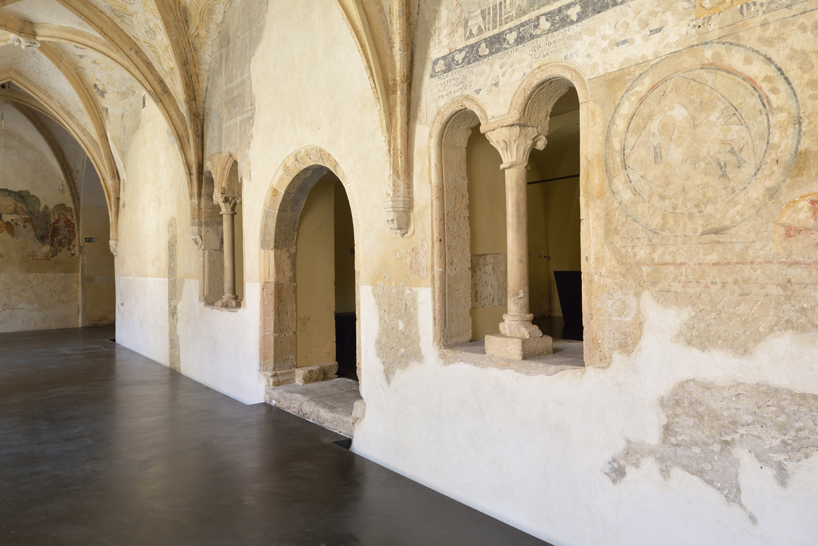 auxiliary spaces are lined around the cloister foyer, that is connected to the various circulation paths
image ©  miran kambič 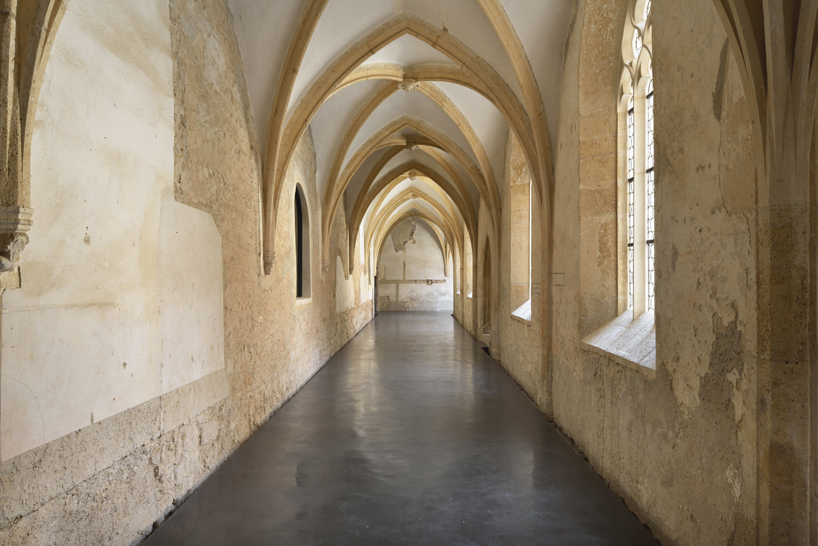 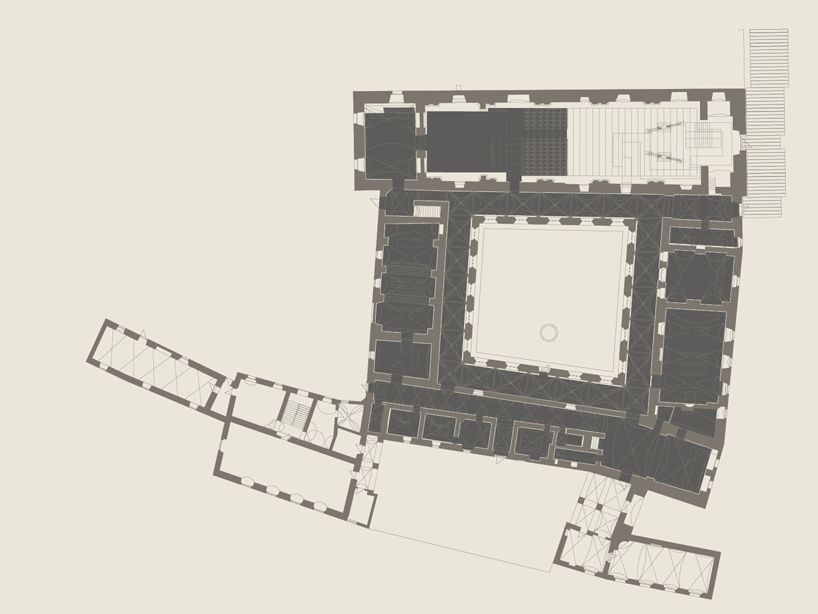 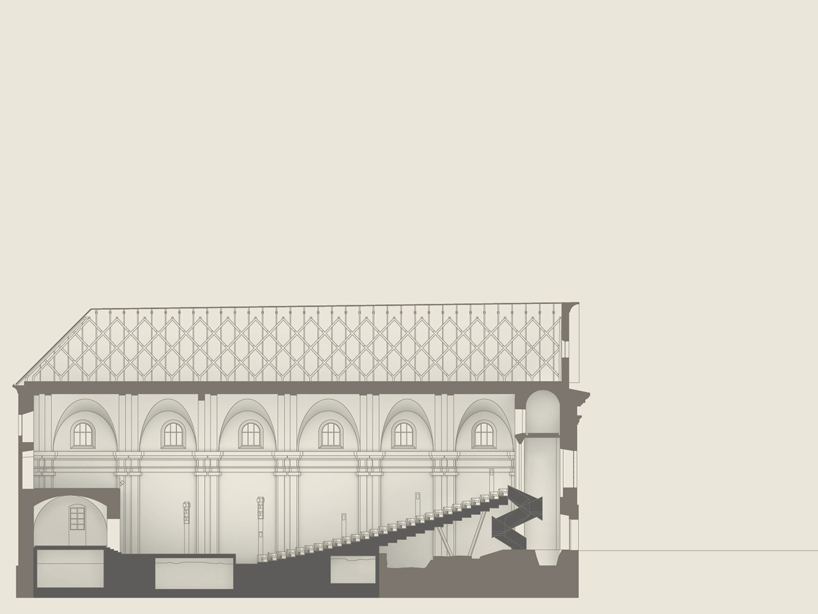 contrast between the new and old
image © miran kambic

the archaeological remains beneath the structure
image © miran kambic

the black staircase in the nave
image © miran kambic