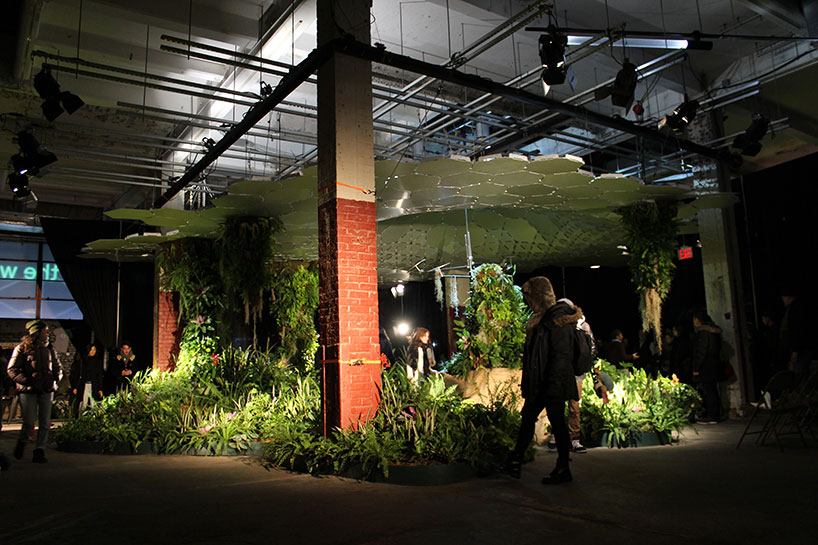 UPDATE: on july 14, 2016, it was announced that the lowline project had received its first city approval. the conditional designation serves as the first major step in making the project a reality, resulting in a community-oriented public and cultural space that will serve as both a resource for local residents and an attraction for visitors from around the world. the lowline is now required to:

in october 2015, the project team opened the lowline lab, a live experiment to showcase and test its solar technology and subterranean horticulture. read more about this project, and the wider concept for an underground park, below.

raad studio is in the process of bringing to life the world’s first underground park in new york. echoing the strategy that led to the creation of the highline, the ‘lowline’ hijacks a portion of abandoned terminal at the delancey/essex station of the J train to create a naturally-lit verdant oasis under the concrete jungle that is new york city. currently under exhibit, the lowline lab has created a proof of concept that will — for six months — show people that an underground park could be possible. the concept is simple enough: how can we make better use of underutilized subterranean spaces that exist throughout the city? the key is in creating an atmosphere suitable for plant life and people alike, an environment which would require daylight, water, and air. while the project will not be completed for a period of 5 years, the current exhibit housing 3,500 plant species illustrates how the system might function and how it will eventually grow to cover the three projected city blocks by the end of its completion. 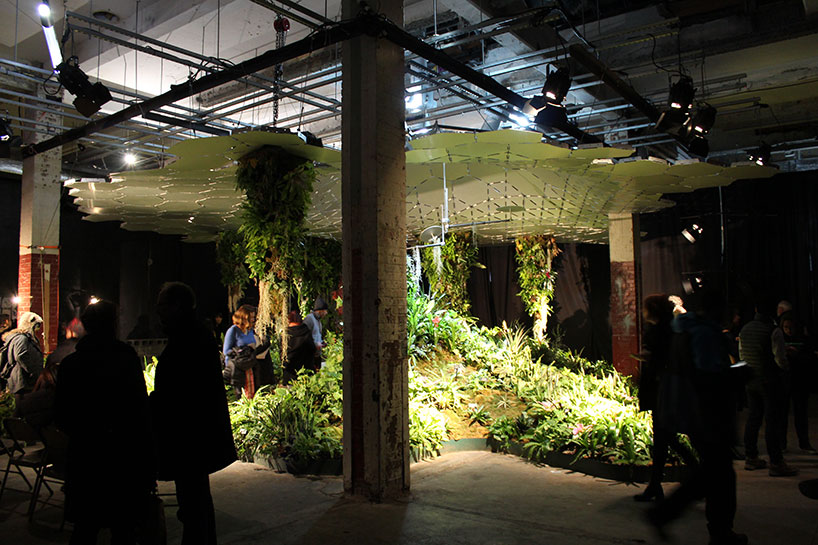 the first obstacle: sunlight. with the use of fiber optic heliotubes designed by james ramsey, a former NASA engineer, sunlight can effectively be routed to the interior with the help of external parabolic bowls to funnel the light and trackers which would determine and follow the best angle throughout the day. below ground, a fluid metallic roof structure made of bright-colored modular hexagonal pieces drapes over the public space. the individual tubes puncture through at various points reflected by suspended mirrors which direct the light onto the metal canopy and diffuse it evenly over the vegetation. solar arrays could collect energy from the sunlight to replace the natural light when the collector heads lie in the shadow of surrounding buildings, thereby reducing the amount of public energy required to sustain the life below grade. 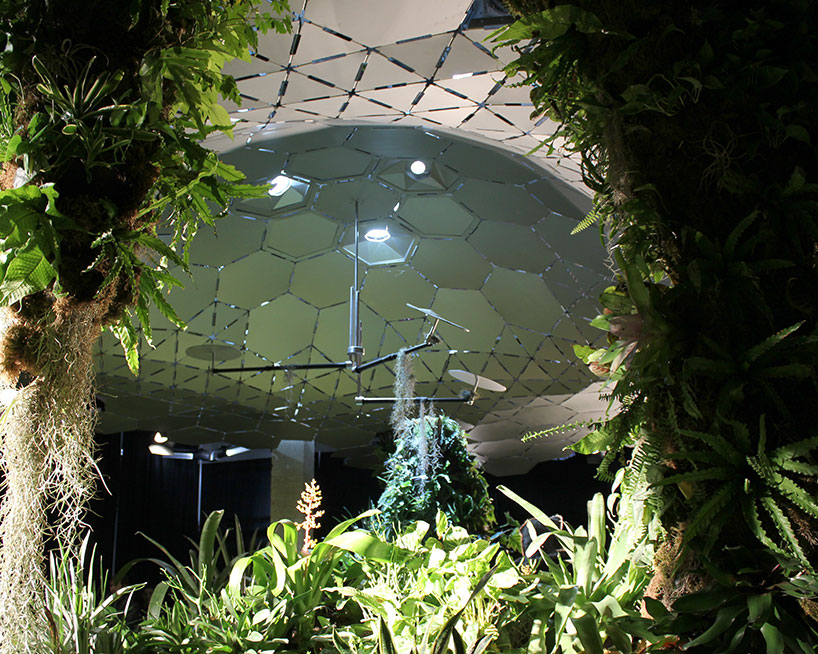 as proposed, am automatic slow drip irrigation system would efficiently provide the plant life with the nourishment it requires. by re-purposing the existing infrastructure of our subterranean transportation systems, it is possible to create environments below ground. if the system proves successful, as it is currently, the project could usher in a new era of habitat-creation. if the resources necessary to sustain life can be effectively transported then the worlds created below ground would be limited only by the imagination. 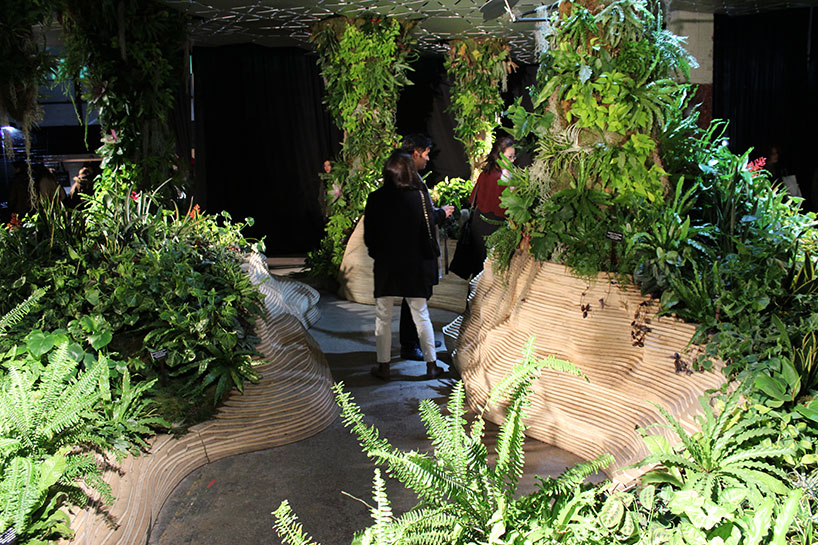 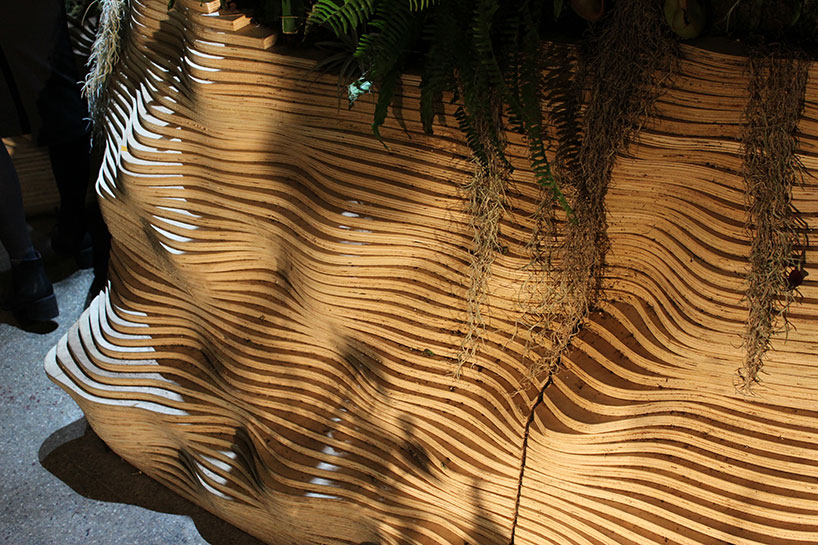 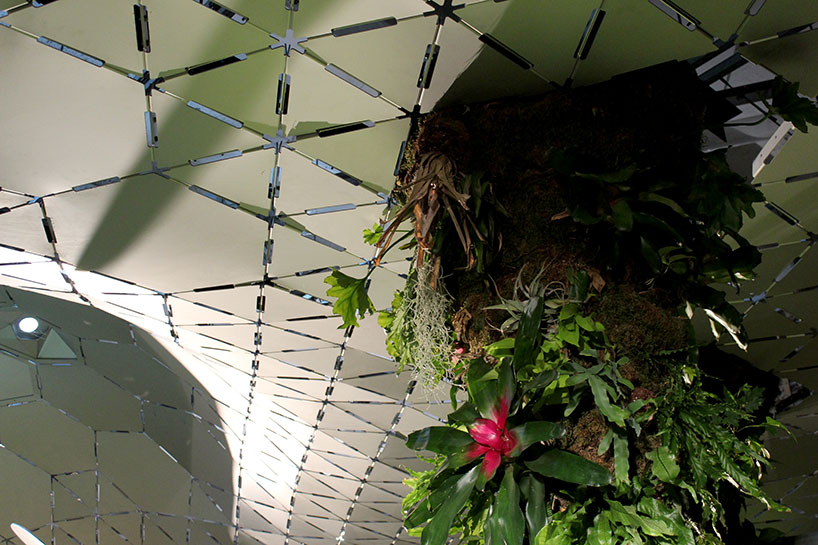 the modular ceiling can be penetrated by various objects
image © designboom 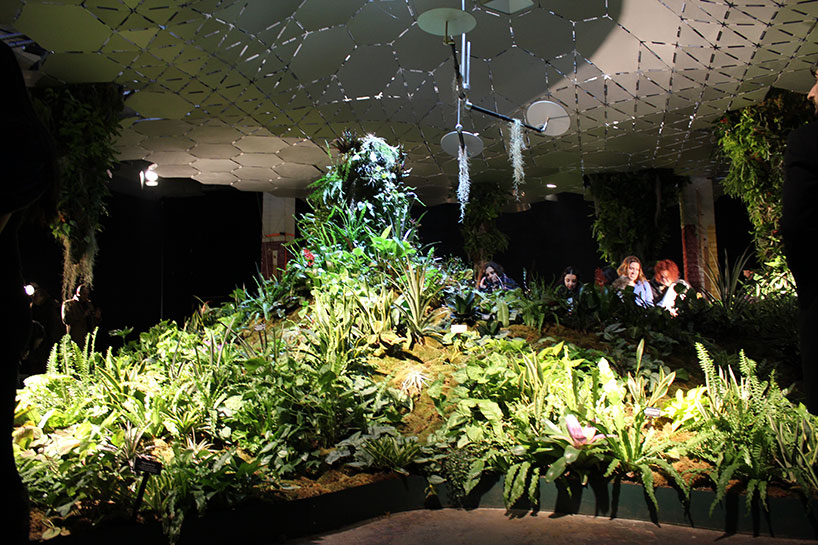 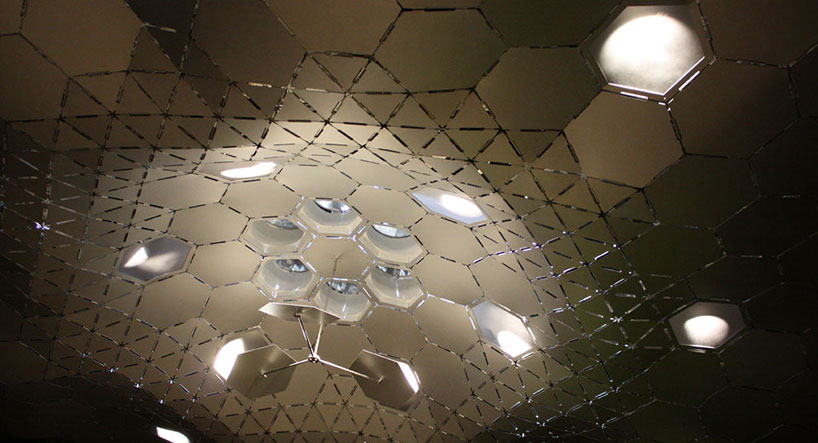 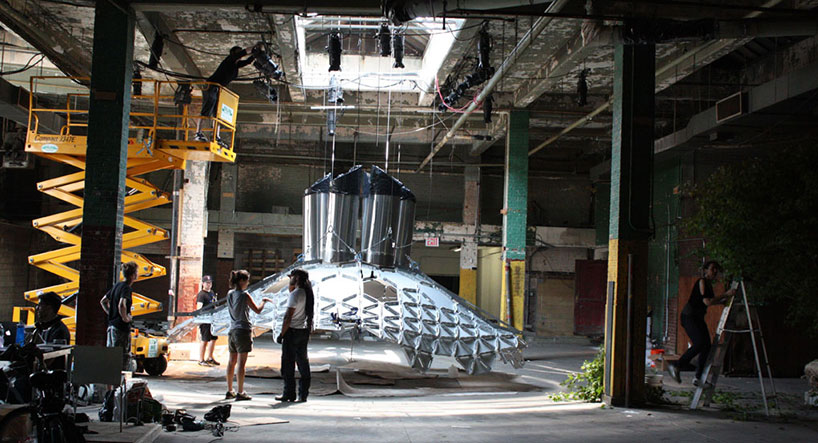 construction of the ceiling structure and heliotubes
image © lowline lab 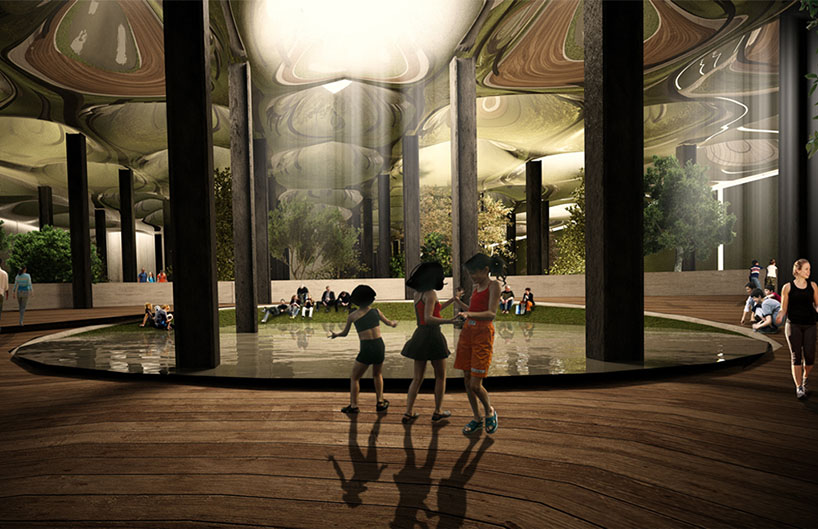 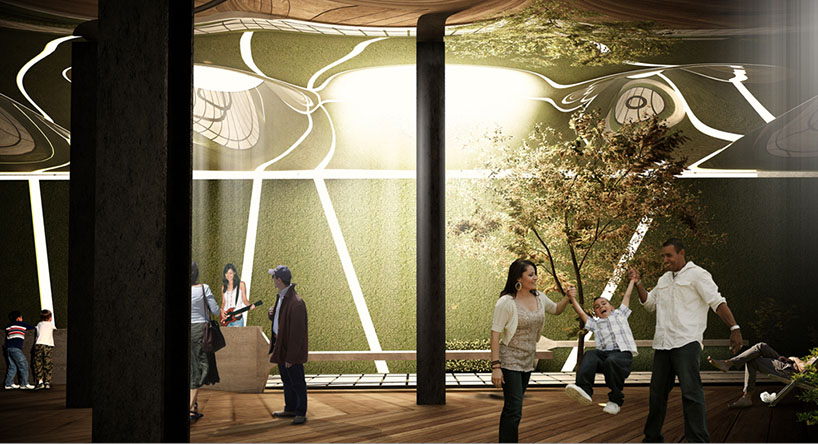 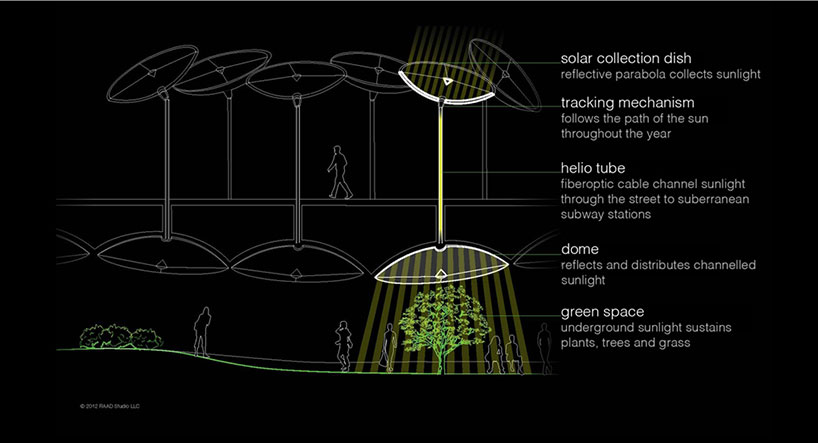 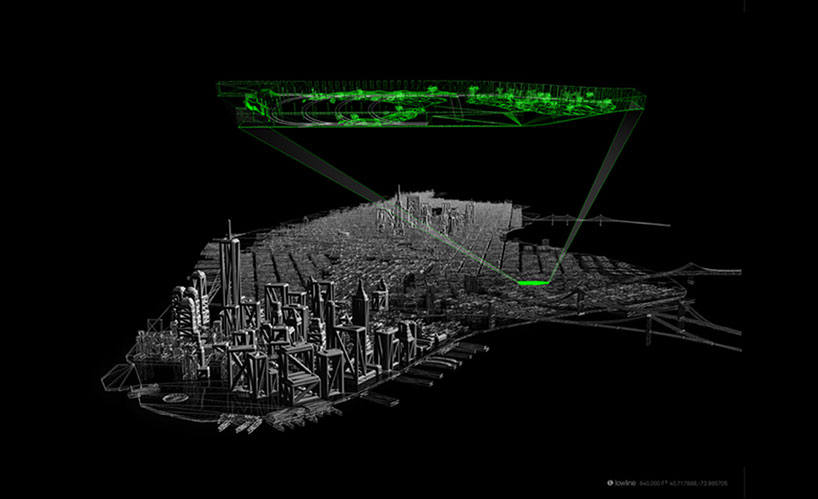