rafael de la-hoz and group GSA’s architectural concept for the ‘one ninety seven’ building originates inextricably from its location right in the heart of parramatta, australia. drawing inspiration from the urban context, heritage, and the timeless new south wales landscape, the proposal made for their client holdmark property group meets the challenge of shaping the transformation of its context. the design is imbued with multiple layers of meaning and significance to generate a contemporary sensitivity and sophistication. 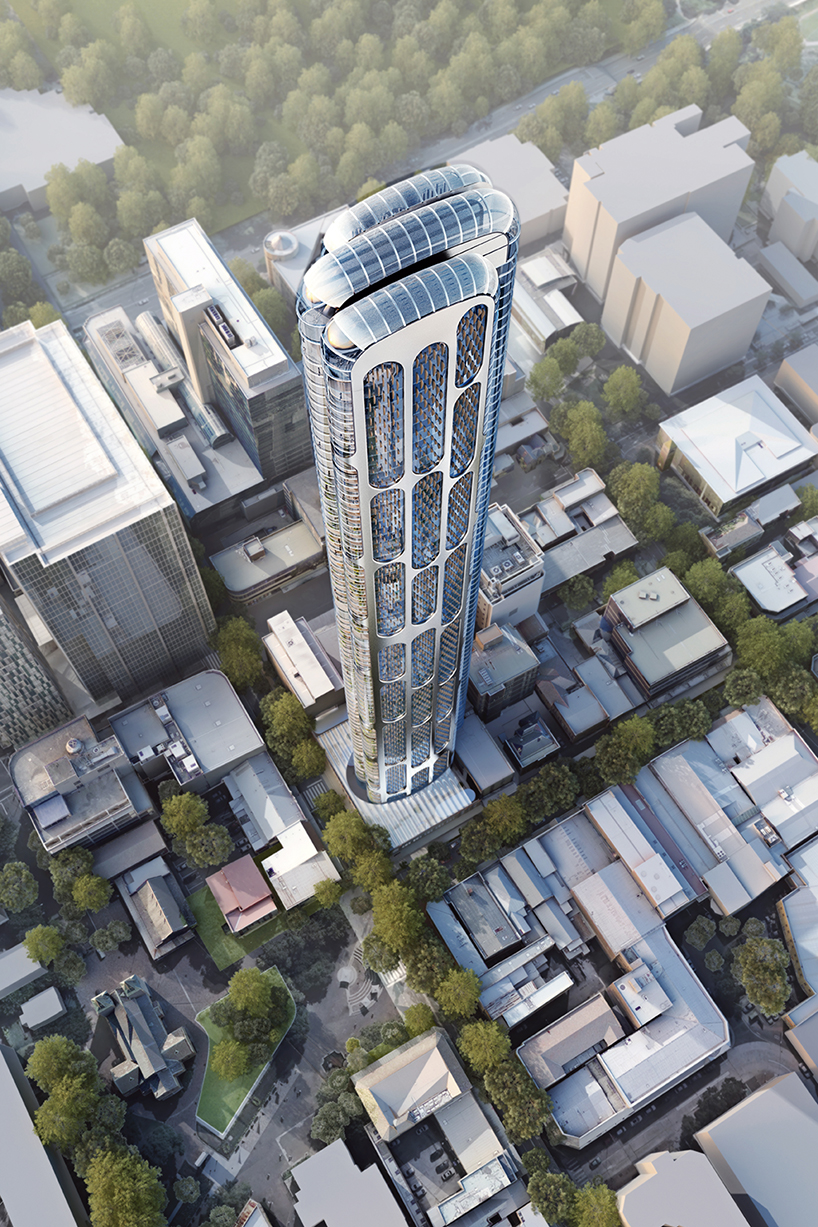 the site for spanish practice rafael de la-hoz and australian based group GSA‘s ‘one ninety seven’ is at the end of a diagonal pedestrian axis that connects parramatta’s train station to the city center. currently, this key pedestrian route at the heart of the city lacks an urban design marker of appropriate scale to direct people towards the city center. the architects’ conceptual starting point is founded on the idea of elongating the pedestrian route into the site. the design team has created a new public space, establishing an empty podium that becomes the pivot for the axes. by opening up the space around the former post office building and creating the opportunity for pedestrians to circulate around it, the architects integrate the historical into the new to magnify the important historical legacy that parramatta has to offer.

the plaza envelops the base of the tower, and all entries to the hotel and residential building address it. retail uses at street level further activates the plaza. the ground floor in particular has been almost completely replaced with a glass facade of no heritage value. the design takes this opportunity to remove the ground floor facade to maximize the seamless continuity of the ground plane between the new plaza, centenary square and the existing streets. the retained upper level heritage facade afloat above the street to re-emphasize its character and introduce visual delight to the streetscape.

rafael de la hoz and group GSA’s aim has been to design a tower that could not be anywhere else in the world as it belongs to its location. a tower is defined by its verticality. the design team searched for inspiration within the new south wales landscape for a characteristic australian element that could help us express this verticality — an element that has to establish a link rooted within its placement in the heart of parramatta. the architects found inspiration in the eucalyptus tree. the composition of the façade comprises carefully proportioned vertical openings that are inspired by the rich patterns on tree trunks that are drawn by the bark that is shed as the eucalyptus grows.

the architects found inspiration in the eucalyptus tree.

the wood contrasts with the smooth aluminum façade to simulate texture over a smooth grey trunk. the timber is a further reference to the eucalyptus while the vertical arrangement of the blades reinforces the tower form and introduces a fine granularity to the façade that breaks down the tower scale. the result is a slender, elegant landmark building, worthy of a transforming parramatta city center. an expression of local identity situated in the ideal location for the city, it fully realizes its potential as a visual marker on the main pedestrian and commercial routes in the city center. 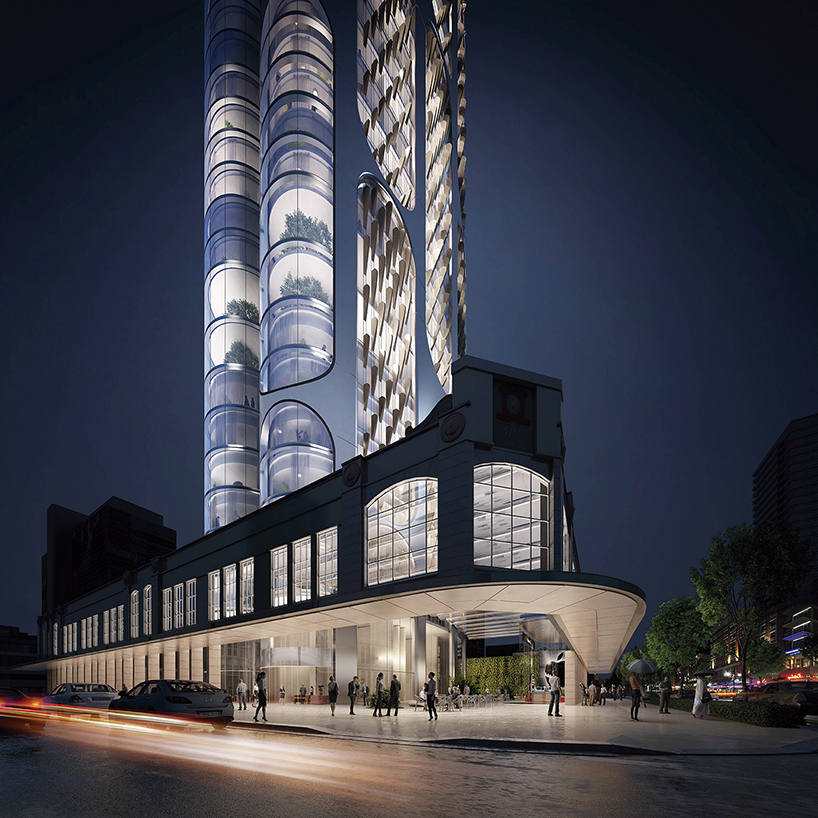 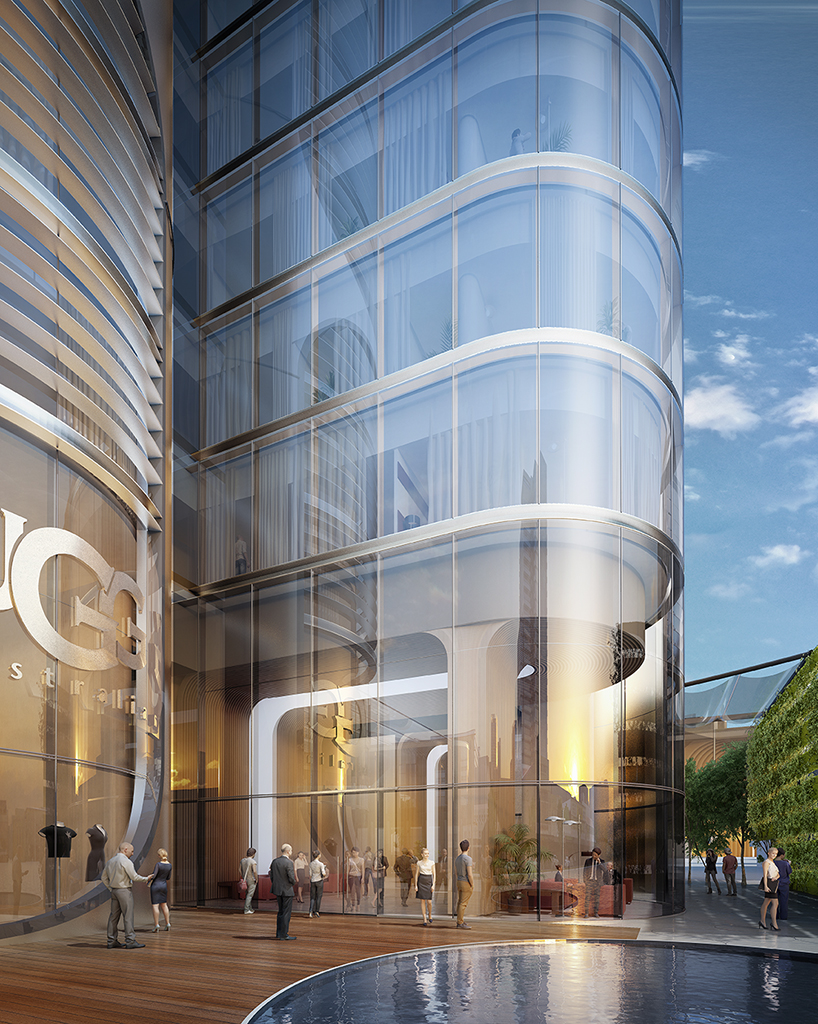 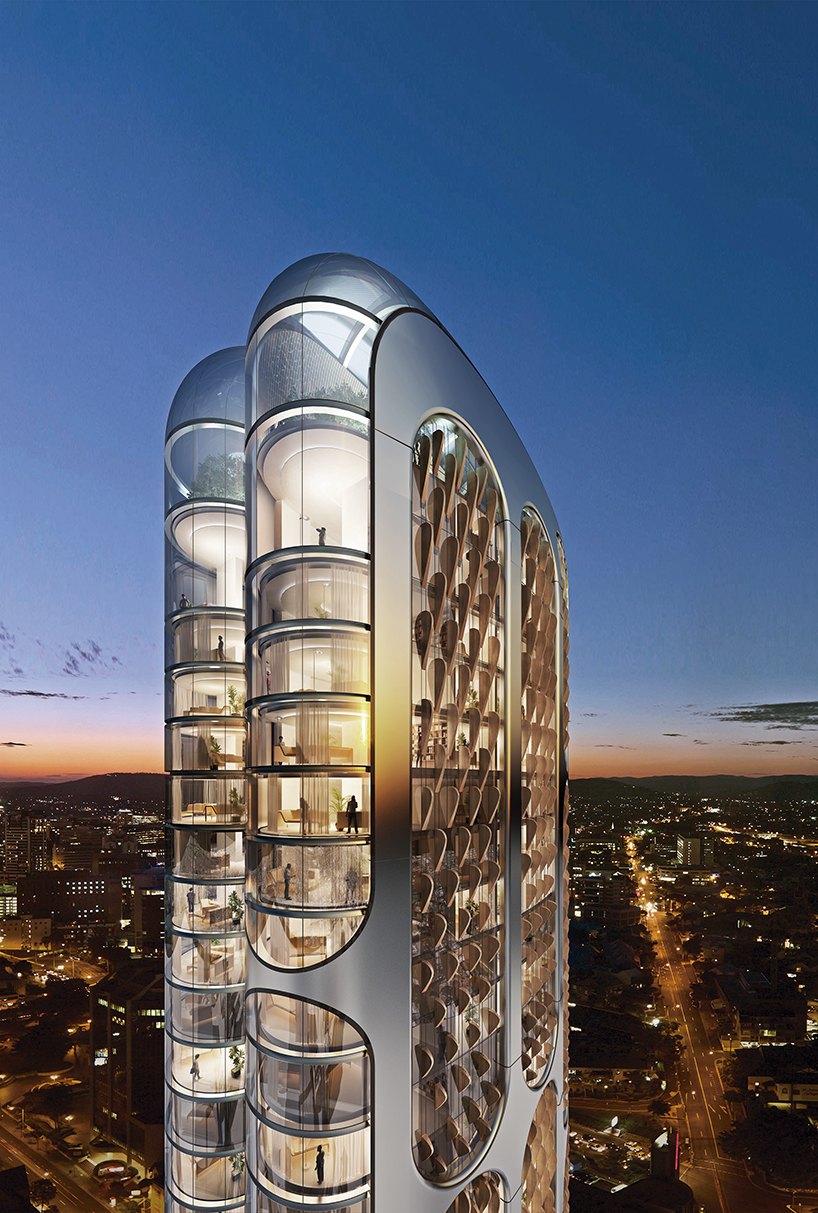 the ‘one ninety seven’ building glowing at dusk 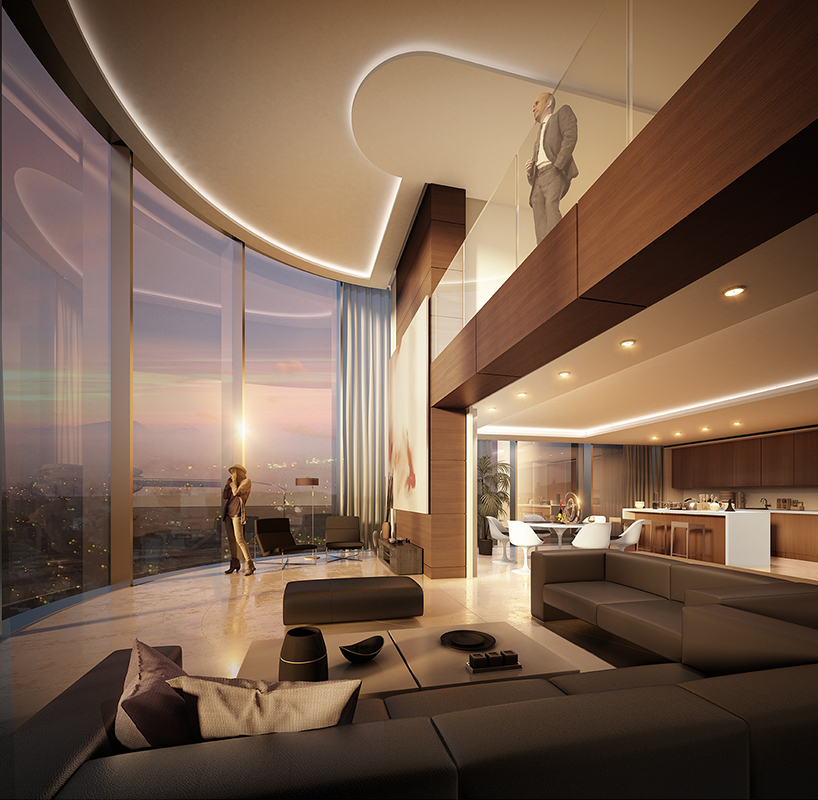 the apartments have a floor-to-ceiling glass facade 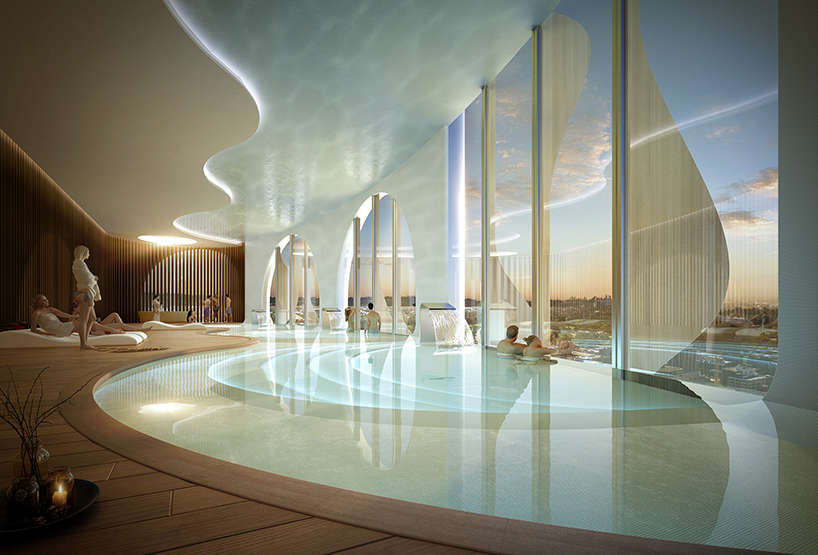 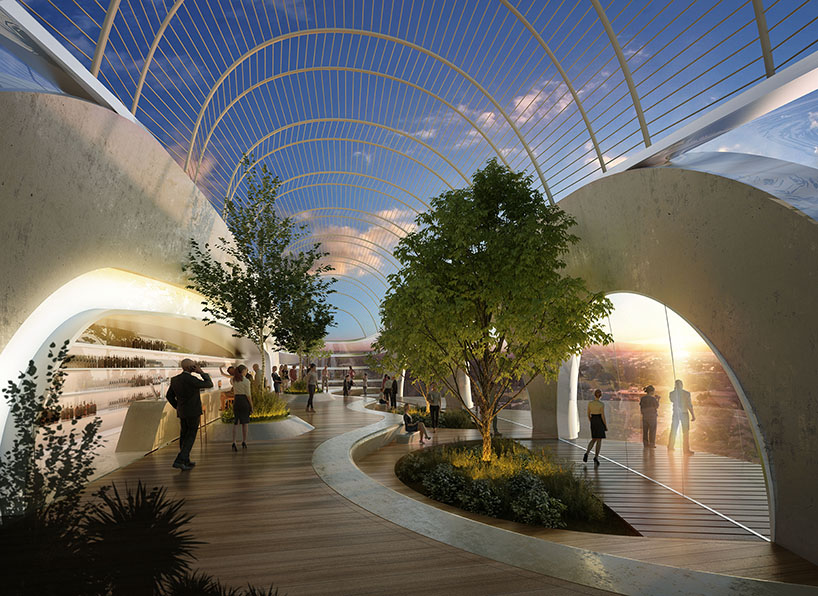 the top floor is a bar lounge with terrace 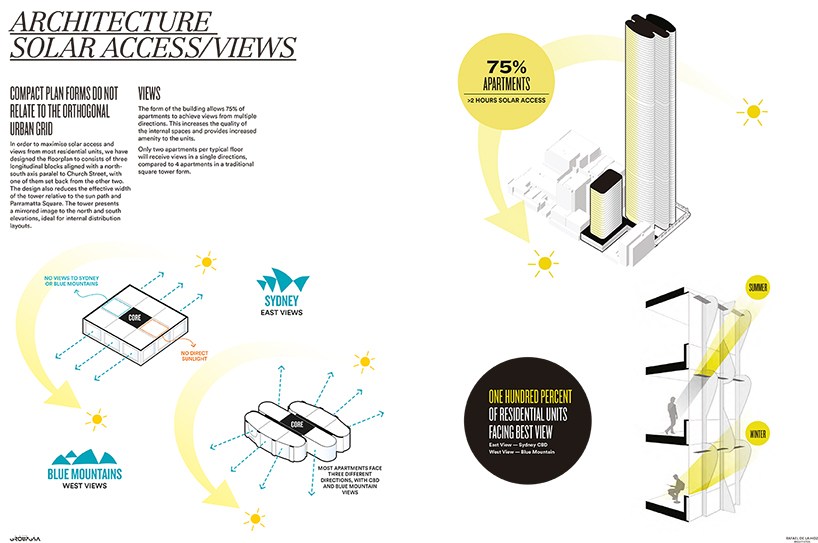 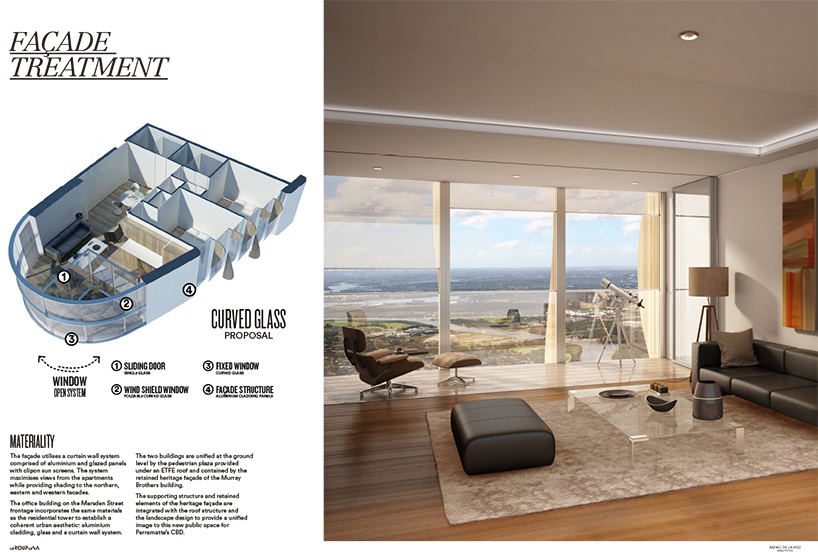 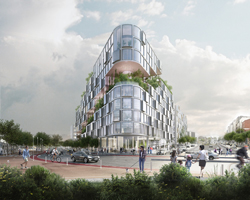 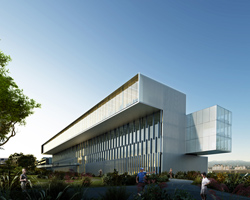 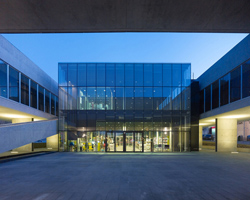 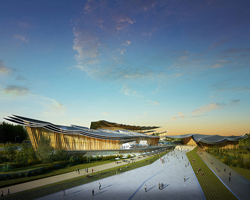