in this edition of readers radar, as the colder months approach, designboom explores the architecture of cozy winter retreats. often integrated into the forests or mountains of a naturalistic landscape, the projects present a shelter from harsh elements and colder climates.

architetto claudio beltrame’s pigna treehouse project was born from the desire to create a compact structure that serves not only as a refuge for man, but also a natural, integrated element of its environment. the concept phase was developed for an architectural competition in 2014 and soon became a concrete project in the italian alps near tarvisio. the claudio beltrame-designed treehouse is made of two structures on three separate levels raised as high as ten meters above ground. the lowest level hovers four meter above the ground and serves as a panoramic covered terrace. the second features a set of stairs — which follow the profile of the pine cone, acting as a structural cage — that leads to the interior through two large windows with sliding doors. 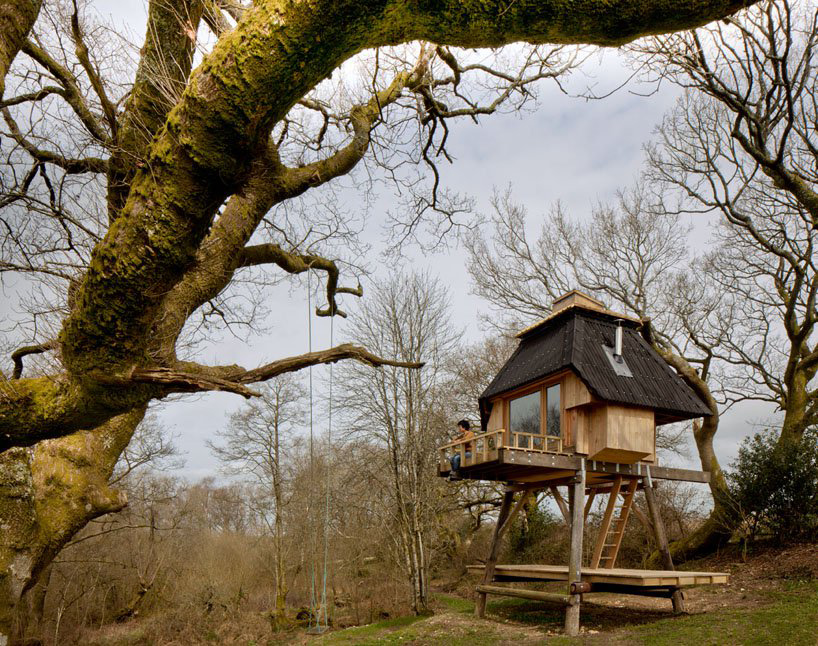 hidden in a small oak woodland in dorset, U.K. is the ‘hut on stilts’ by architect nozomi nakabayashi. the 2.5m x 2.5m micro-home stands high above the ground, serving as a magical getaway to rest, ponder, and refresh the mind of the client, a writer. the structure is split into two floors. below, an exterior deck provides an area to relax and have small get togethers, as well as store things off ground. above is the hut’s main floor which includes a wood-burning stove, hidden bed, and a patio connected via large, swinging windows. the construction was carefully planned using prefabricated parts that were raised directly on the site. 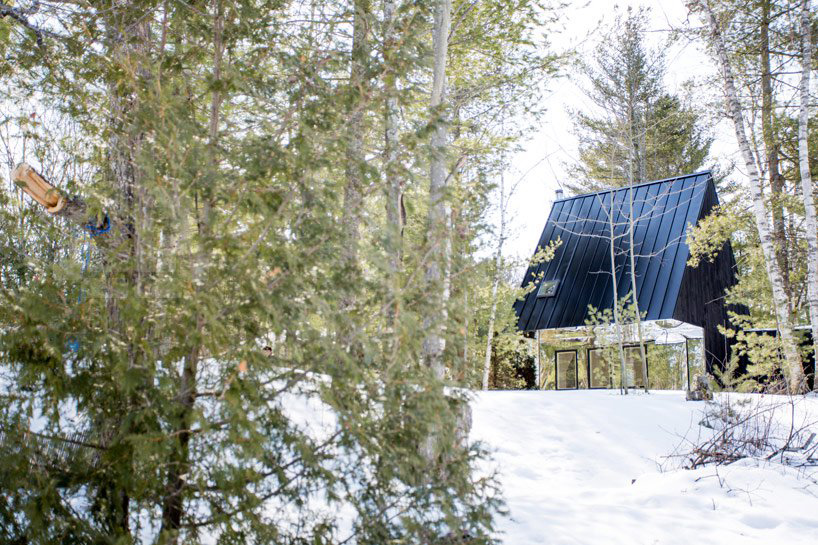 re-envisioning a typical tree house, canadian architecture firm uufie have designed this ‘lake cottage’, where nature is an integral part of the building. the house is located in bolsover, ontario, canada surrounded by birch and spruce tree forest along the kawartha lakes. the two-storey structure is composed of a 7m high a-frame pitch roof, covered in black steel and charred cedar cladding. accommodating a large family, the multi-use interior features a deep cut in the volume, to create a cantilevered overhang. the protected terrace is visible from the exterior, where a series of mirrors reflect trees onto its surface to further enhance the illusion of bringing the forest into the building. the sensation of the built form merging with nature is continued onto the interior – the living space is organized as a self-contained unit, while the peripheral rooms extend outwards to the forest. 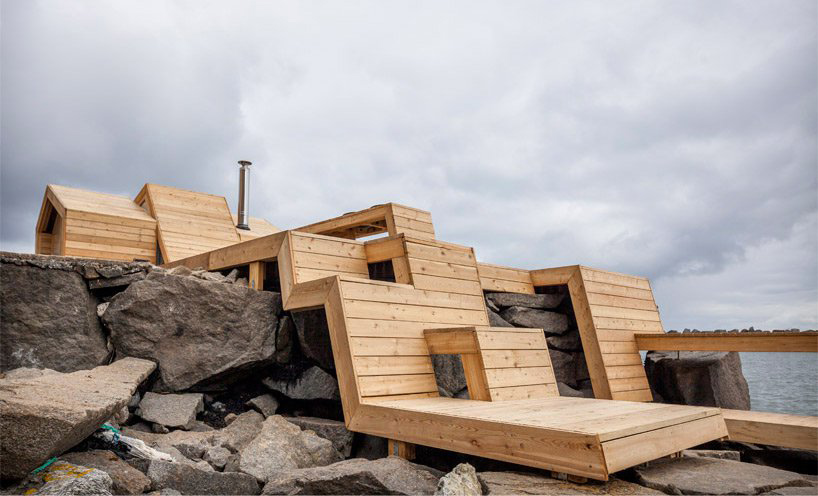 kleivan is a small town on norway’s lofoten islands. located north of the polar circle, even in its prime the place was little more than a fishing village with heritage buildings that date back to the 1800s and showcase a lifestyle that is likely never to exist in the same way again. due to their historical significance, three structures have been listed in the cultural heritage plan for lofoten by nordland county in 2007. students of the scarcity and creativity studio from the oslo school of architecture and design were asked, ‘to improve the use of these protected buildings; by creating a melting point which will provide activity and social life to increase the use of the quay.’ their answer comes in the form of ‘bands’, a multi-purpose facility that forms a sensitive relationship with the landscape and water. 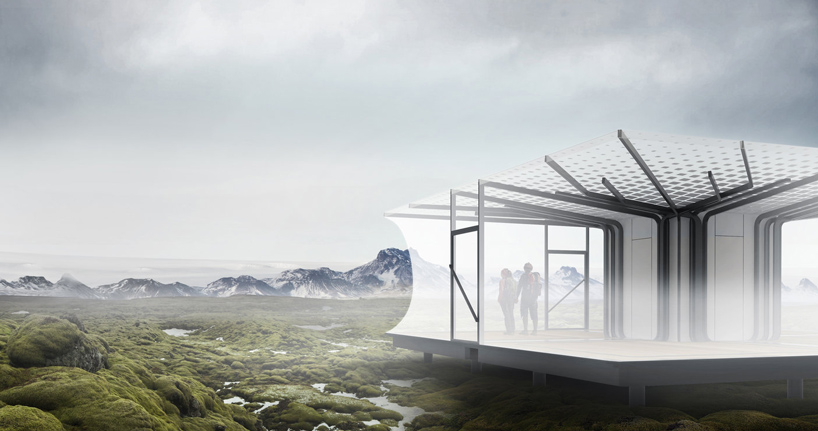 SA lab has designed a modular trekking lodge for use in harsh icelandic landscapes, influenced by the norse legend of yggdrasil — a mythical tree and symbol of life. conceived as a sanctuary where travelers can find everything they need for respite from their journey, the design of ‘under yggdrasil’ is based on traditional icelandic architectural forms and cultural symbols. composed of four separate prefabricated chambers, the lodge rests on a platform constructed atop a pile foundation, providing minimal environmental interference. 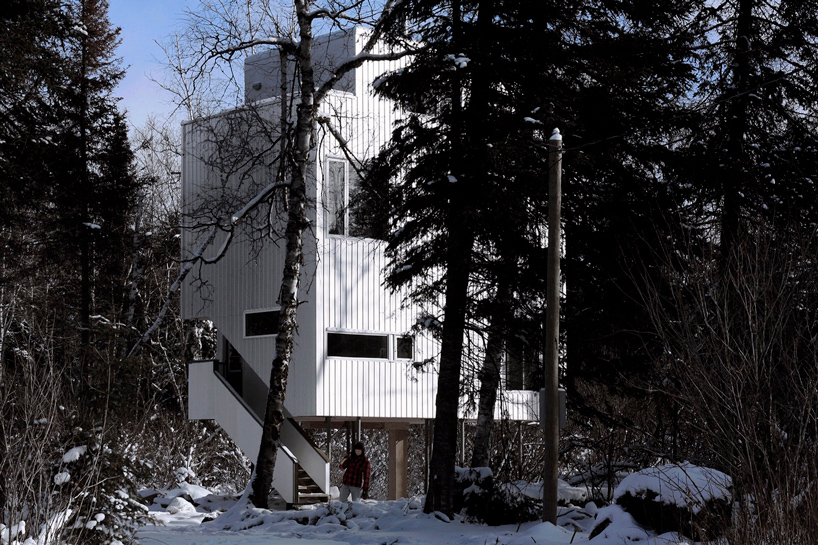 the pole house is a year round cottage designed by architecture studio DIN projects for a couple and their son on a heavily wooded site in the manitoba interlake area — two and a half hours north of winnipeg, canada. the cottage lot, obtained through the provincial lottery system, overlooks lake winnipeg — although a local easement limits the house’s proximity to the water. to suit the dense forest context, DIN project has developed pole house as a vertical wood platform structure that floats above the ground on thin steel pipe columns. the resulting tower typology enables views to the lake through the woods.

the ‘opposite house’ by local-based studio rzlbd architects, is a commissioned private residence located on the scarborough bluffs, closer to the east edge of the greater toronto area. the clients, a professional couple who both work from home and enjoy an active home entertainment lifestyle, were looking for a modern dwelling that would offer everything they might need, including enough space to transition into, if their family grows at a later time. the house presents a purposely low, dark-brick profile – just a single, unobtrusive 146-foot long story. both outside and in, the opposite house is at once familiar yet different, spectacular yet comfortable, private as well as public – presenting a study in subtly rendered juxtapositions. 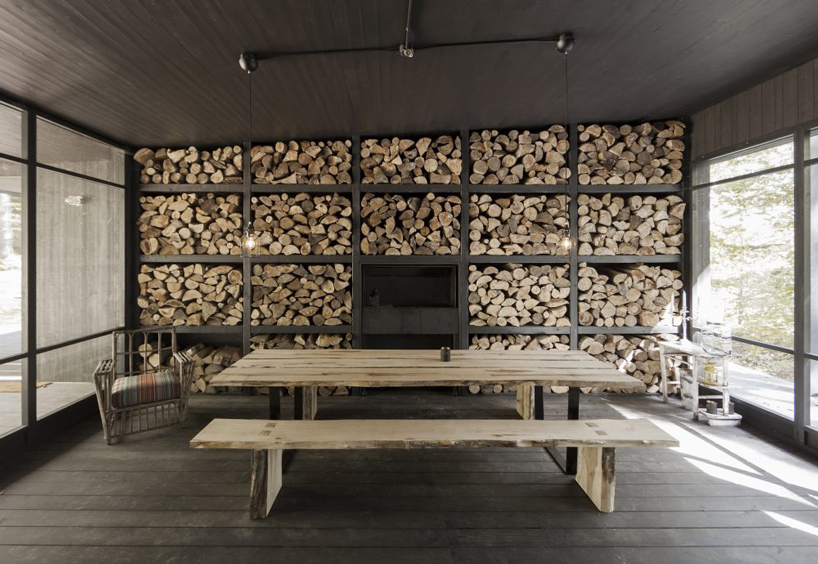 ‘chalet forestier’ is a single family cottage that sits upon the eastern face of mount pinnacle in frelighsburg, quebec. the home was designed by quebecois firm atelier barda, in collaboration with lise gagné architect, using a modest set of requirements laid out by the clients. it was necessary that the structure be easy to maintain — secondary weekend residence — be open to the surrounding landscape, and be built using cross-laminated timber. the house is organized as a single volume sub-divided into three programmatic spaces: a master bedroom/public area, a loggia, and children’s bloc. to move between the three, inhabitants must first walk outside — which during the canadian winter, is a feat unto itself. 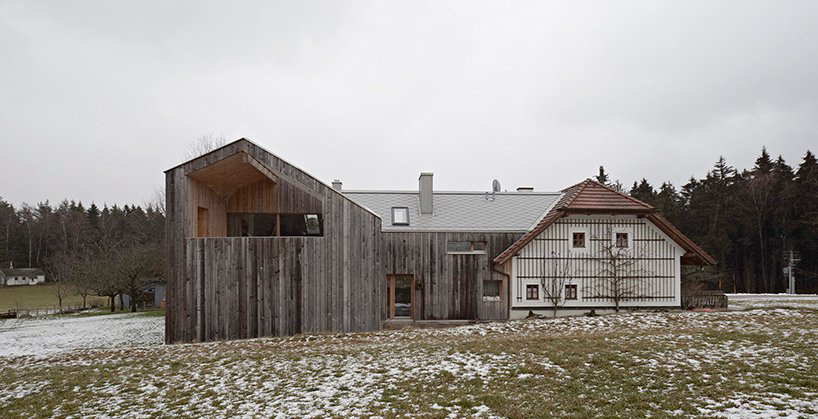 studio HPS-architekten has completed the renovation and residential expansion of an old ‘farmhouse’ in the austrian countryside. the home, altered several times throughout the years, had become a disconnected amalgamation of efforts past. at the project’s onset, the property underwent a thorough appraisal to select the building’s preservation-worthy components.HPS-architekten retained only the oldest sections of the ‘farmhouse’ with all other existing extensions removed or put through intensive adaptation. the residence’s updated parts are clad with roughly-sawn spruce to visually separate from the original home, but do not cause unnecessary interruption to the surrounding placid landscape.

deluxe mountain chalets with fantastic view across an austrian valley, by viereck 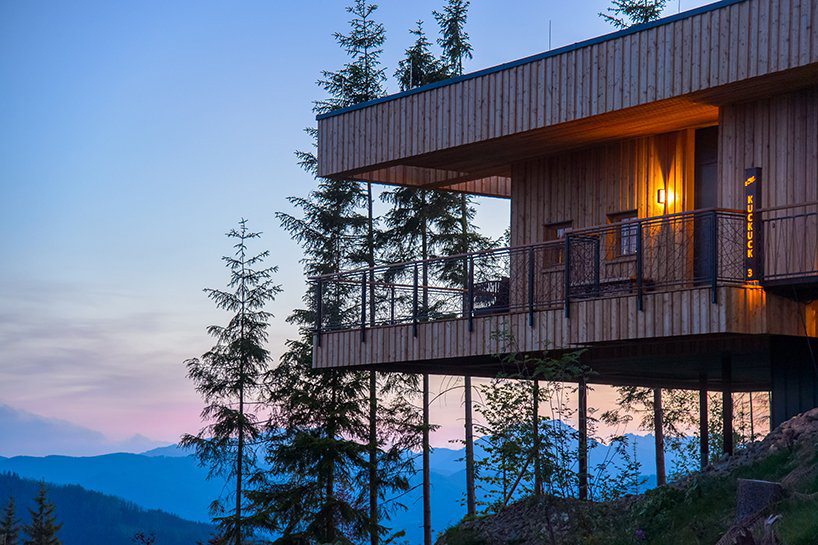 set within the scenic mountain panorama of upper styria, austria, the ‘deluxe mountain chalets’ designed by austrian architectural practice viereck architekten serve as an extension to the ‘wirtshaus steirereck’ restaurant. capturing sweeping views across the valley — the chalets are sited on the mountain’s crest to provide 360 degrees views. due to the existing forest along the crest, the concept mimics a bird’s nest which floats among the treeline. 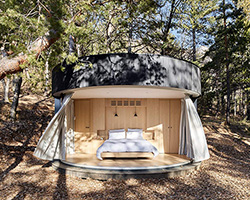 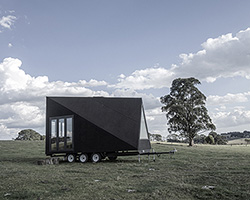 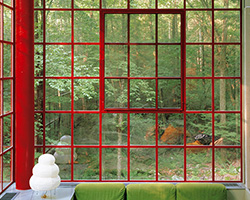 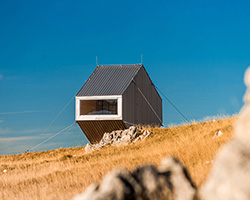 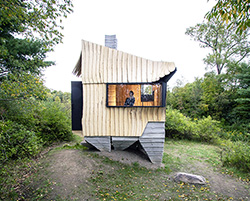 HANNAH transforms wood considered as waste into this 3D-printed cabin 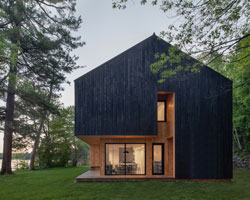 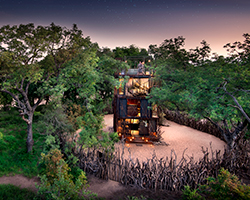 andBeyond invites travelers to sleep in its ngala treehouse, among south african wilderness 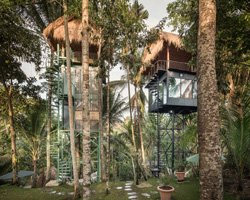 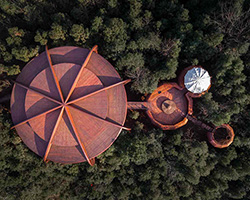