exhibited postcard of OMA’s CRONOCAOS for the 12th international architecture biennale in venice, italy picture of the interior of ‘maison á bordeaux’

at this year’s international architecture biennale, rem koolhaas and OMA covers a quiet but imperative topic of the state of architecture today with ‘CRONOCAOS’.

the history and directions of architectural preservation already covered, we now move on to the ways in which OMA approaches the under-discussed topic in their own work, how their often innovative applications keep a ‘rescued’ project alive and evolving, and methods to ensure a symbiotic relationship between new buildings and preserved architecture. 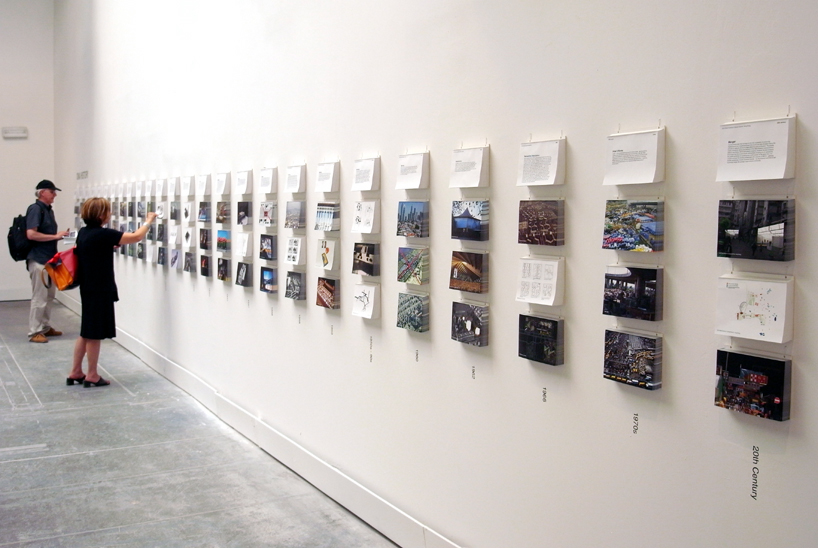 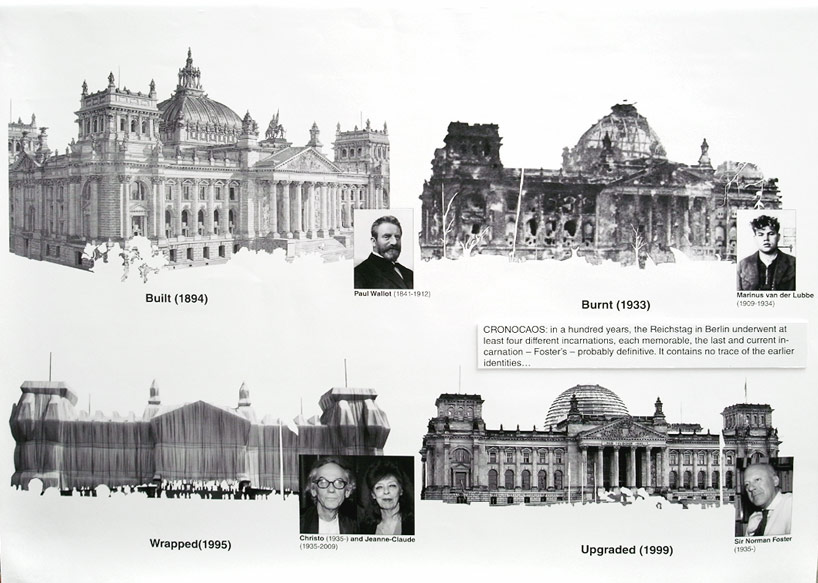 ‘CRONOCAOS: in a hundred years, the reichstag in berlin underwent at least four different incarnations, each memorable, the last and current incarnation – foster’s – probably definitive. it contains no trace of the earlier identities…’ (photograph of exhibted panel)image © designboom

there exists two conflicting ideologies when it comes to the subject of preservation: ‘ruin’ vs. ‘restoration’. many times, a ‘restoration’ project will gut the building in question, resulting in a sort of farce, where the ‘historical structure’ is an entirely new building in and of itself. bureaucratic envelopes of preservation in fact promote radical transformations. their language and codes are too blunt and primitive to serve their stated aim: to generate a ‘fit’ between what exists and what is ‘renewed’ (but what is in fact very often entirely rebuilt). they produce an entirely new architectural language of disguised consumerism. 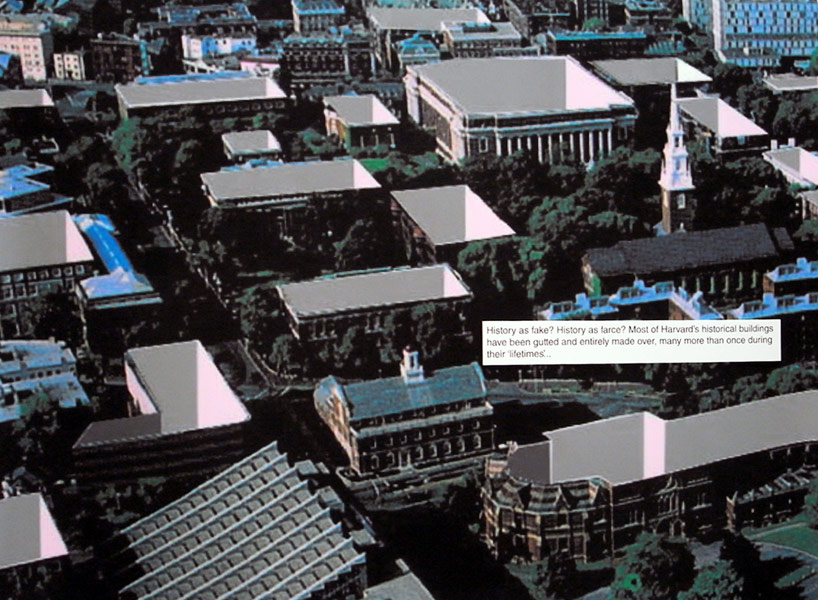 ‘history as fake? history as farce? most of harvard’s historical buildings have been gutted and entirely made over, many more than once during their ‘lifetimes’…’ (photograph of exhibted panel) image © designboom

OMA’s preservation projects in the past illustrate that the core aim of ‘preserving’ should be to negotiate between both the old and the new in an active and engaging manner, siding with neither ‘ruin’ nor ‘restoration’ but establishing a new architectural configuration altogether. OMA has conducted extensive studies on a number of urban and cultural frameworks to retrofit the present time for the coming years. 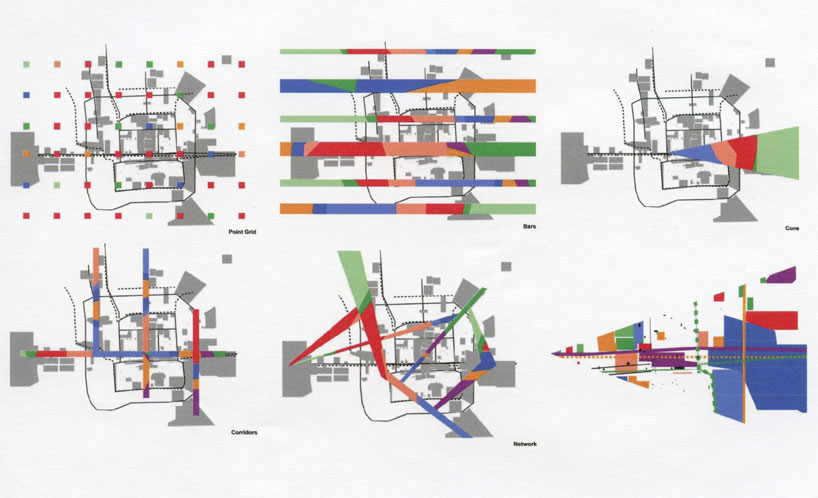 if the point of preservation is to identify and maintain elements that make a city unique, beijing contains a vast arsenale of relatively new architecture and urban situations that deserve the same consideration as the old centre and the hutongs, the generic substance of the chinese city most characteristic of beijing’s ‘past’. rather than a seemingly inevitable focus on the centre – the oldest, the most beautiful, the most historic part – different models of preservation can be imagined: a wedge could record, systematically and without aesthetic bias, all the developments that have occurred in an urban system over time; a point grid could act as a form of sampling, a statistical preservation model capturing every urban condition. instead of a temporal monolith – a permanent centre and an ever changing periphery – the city will be defined and enriched by phasing: older and newer will be in permanent dialogue. 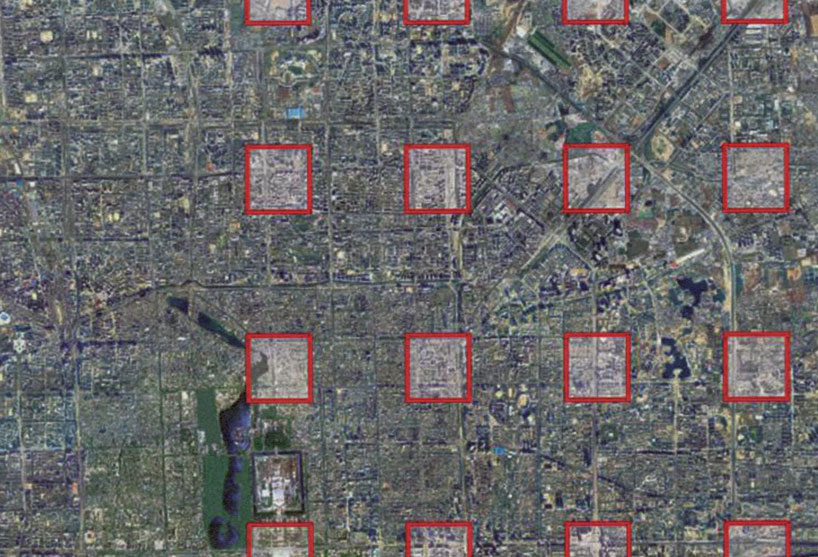 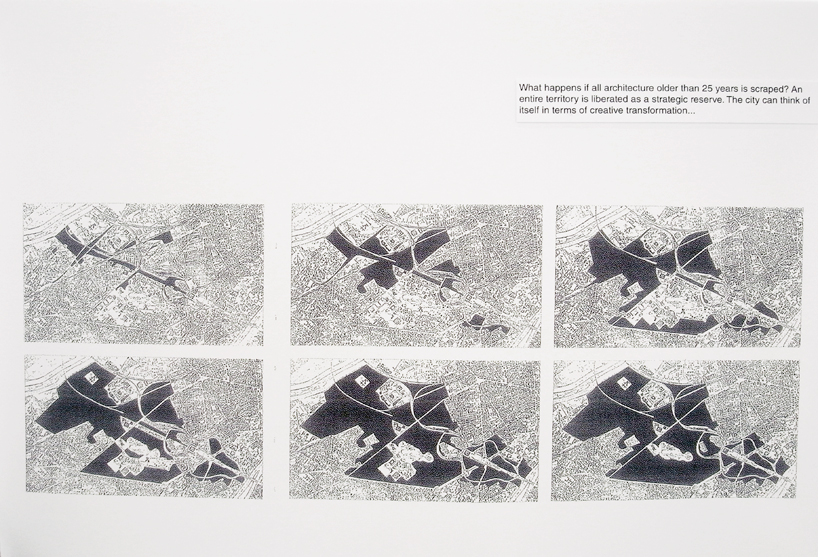 ‘what happens if all architecture older than 25 years is scraped? an entire territory is liberated as a strategic reserve. the city can think of itself in terms of creative transformation.’

la défense is a strategic reserve in paris which has acted as a privileged expansion zone during when the city was going through the transformation of modernization. the first sector now full–and with europe’s opinion that everything historic should have the right to eternal life–OMA looks at ways to create ground for new architecture while still preserving the ‘theatre of progress’.this competition entry proposes to project a grid across the entire area including la défense and to gradually expose this new system as ‘modern’ buildings meet their successive expiration date. the design is both conceptual and operational; it will not subject everything in its way to its discipline but will act as a filter to absorb those entities whose right to survive is not contested. 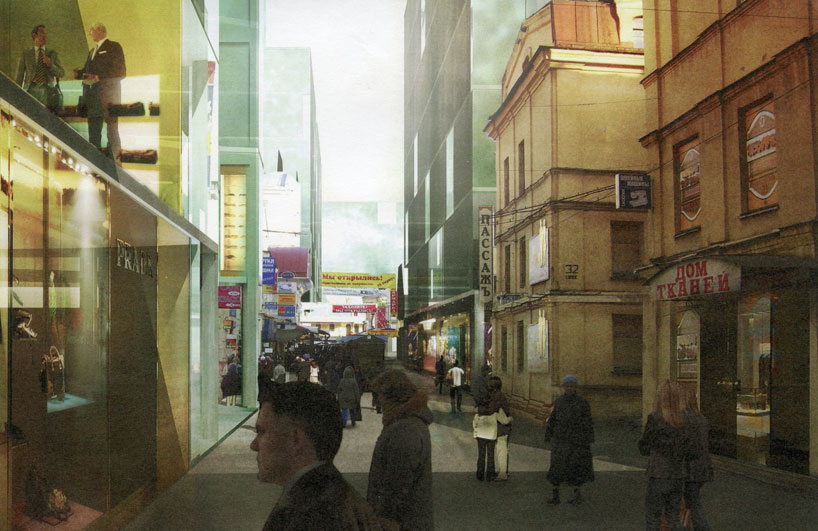 rendering of apraksin dvor, st. petersburg, russia 2007 competition entry (exhibited postcard) image © designboomconsisting of multiple freestanding buildings arranged within a market yard, apraksin dvor represents a unique urban typology in the historic centre of st. petersburg. OMA takes the uniqueness of the site, which makes it prime for preservation, and uses it instead for development.

the design proposes to keep 50 per cent of the area in its current state while the other 50 per cent is demolished and treated as the site for new buildings. the old and the new are organized in to a checkerboard: a co-existence of two uninterrupted conditions, creating both a relationship of maximum contact and maximum independence while avoiding the subjective evaluation of the historic merit of each existing individual building. the old and the new can either be experienced in extreme juxtaposition or as independent parallel experiences, creating simultaneously an illusion of complete preservation and perpetual newness. 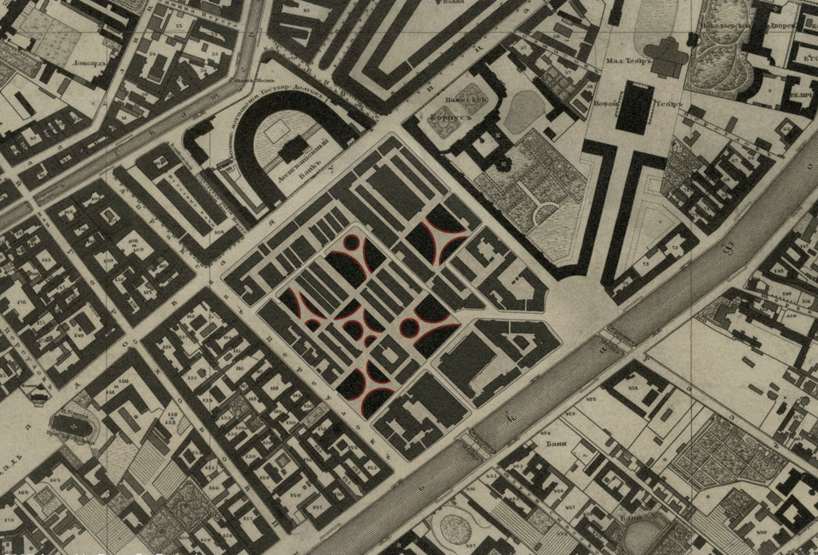 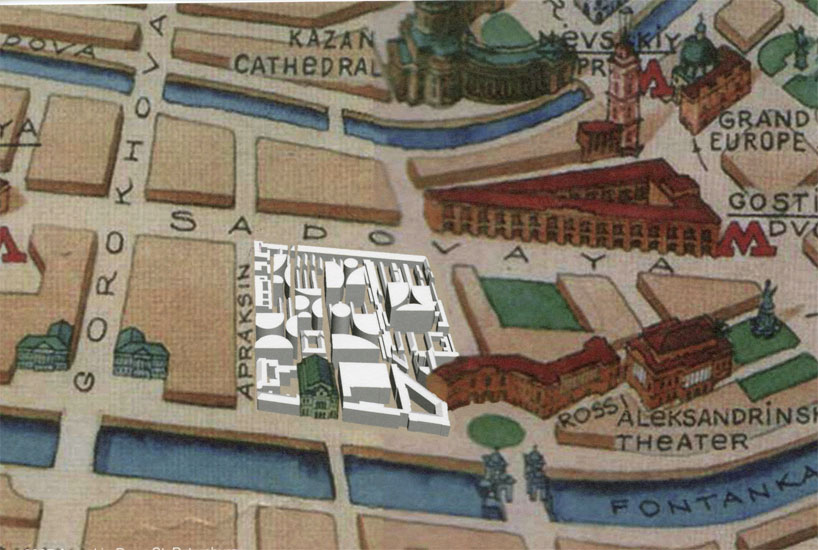 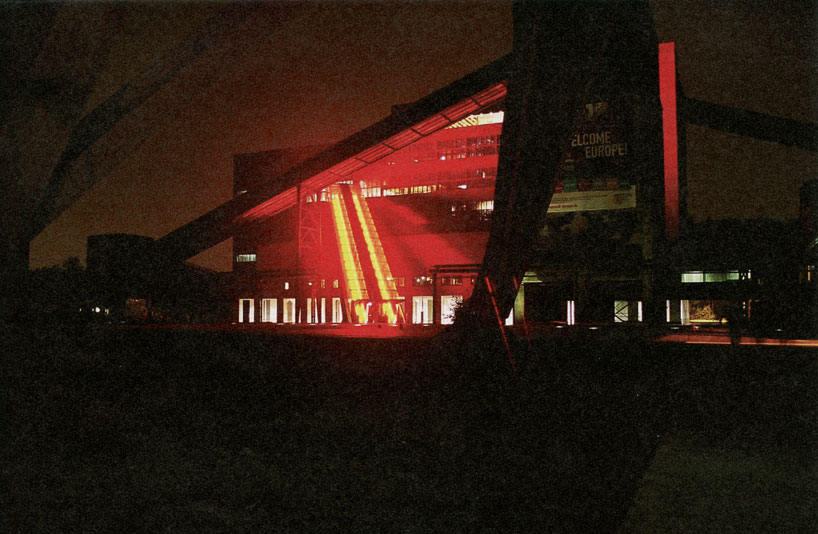 the ruhr, an area undergoing transition after the decay of its major industry, coal mining, elects to preserve a mining site shut down in the 1980s. the zeche zollverein, designed in the 1920s by students of mies using industrial architecture as a vehicle of ambition, is granted UNESCO world heritage status in 2001 – prompted by an OMA masterplan to preserve and reactivate the site. OMA collaborates with UNESCO on installing, around a tangle of original machinery, a visitors centre and ruhr museum inside the kohlenwasche (coal refinery). after persuasion, UNESCO agrees to a rebuilding of the crumbling walls on the exterior of the building, thus prioritizing the authenticity inside. preservation takes place through a variety of tactics, including pure simulation: a 48-metre free-standing escalator mimicking the site’s sky bridges for transporting coal provides sympathetic public access to the renovated kohlenwasche. 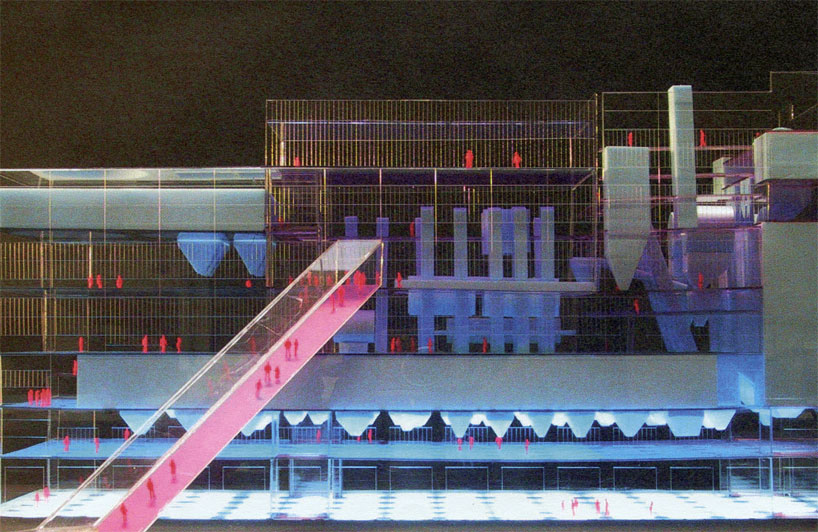 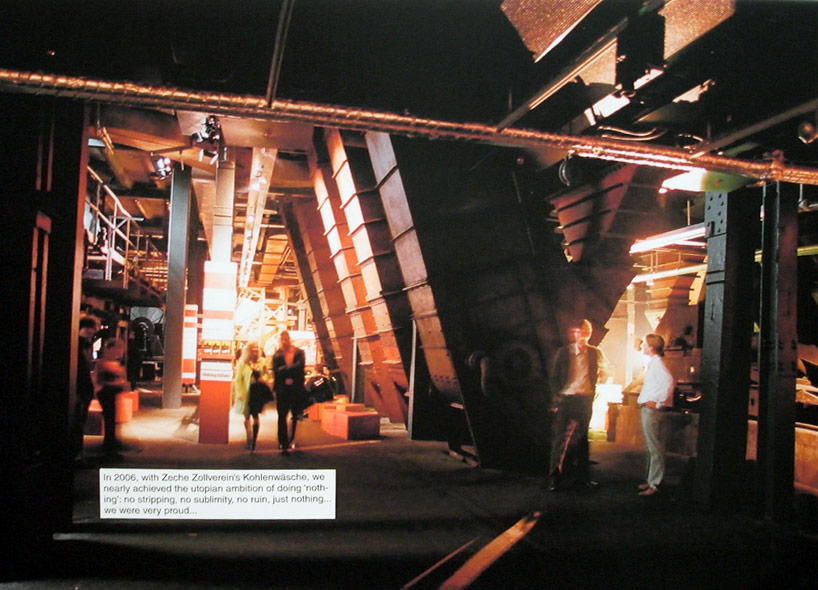 ‘in 2006, with zeche zollverein’s kolenwasche, we nearly achieved the utopian ambition of doing ‘nothing’: no stripping, no sublimity, no ruin, just nothing… we were very proud.’ (photograph of exhibited panel) image © designboom 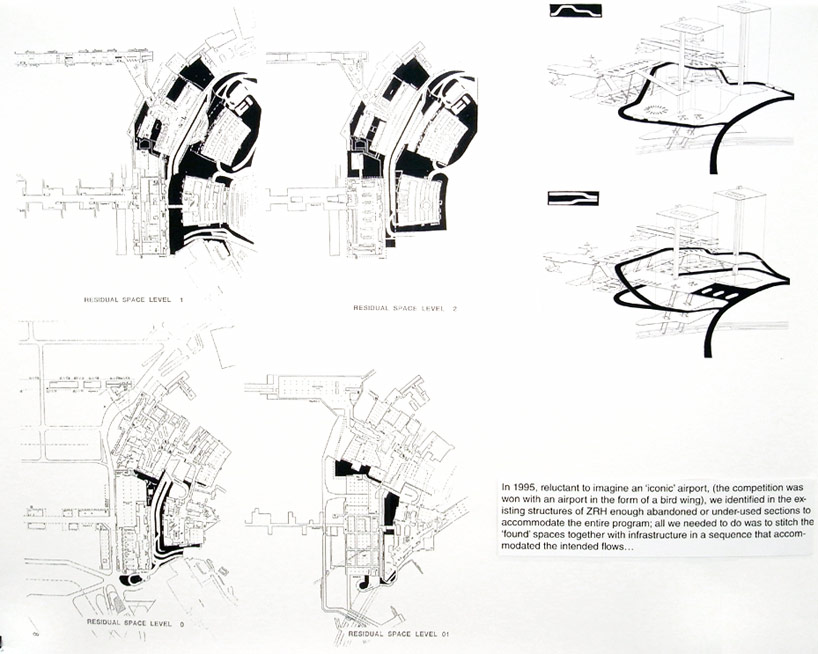 ‘in 1995, reluctant to imagine an ‘iconic’ airport (the competition was won with an airport in the form of a bird wing), we identified in the existing structures of ZRH-enough abandoned or under-used sections to accommodate the entire program; all we needed to do was to stitch the ‘found’ spaces together with infrastructure in a sequence that accommodated the intended flows…’ image © designboom 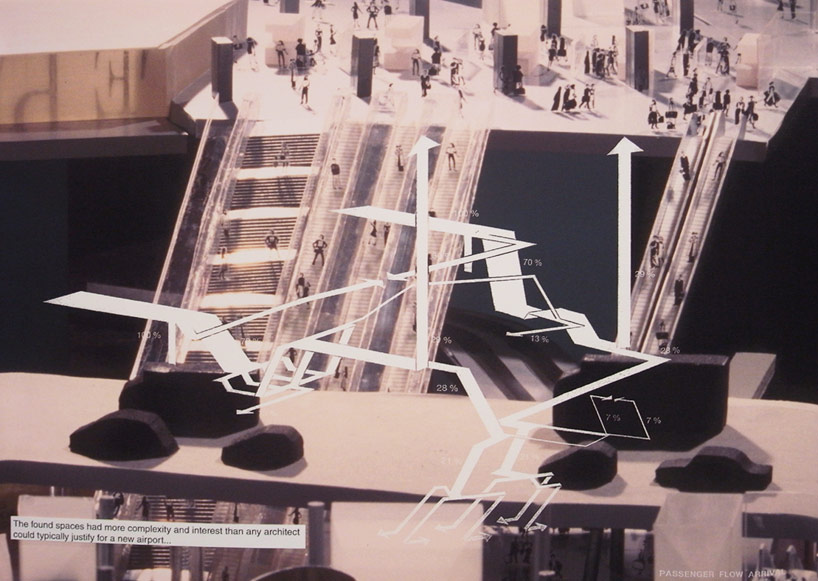 to read our full report on OMA’s CRONOCAOS and for more images from the exhibition, click through to PART 1, PART 2, PART 3.