having always been interested in the past, OMA has been heavily involved with projects concerned with the issues of time and history since the office’s inception 35 years ago. together with the studio’s think tank counterpart, AMO, the exhibit illustrates the present year as the perfect friction point between two directions: the world’s ambition to rescue larger and larger territories of the planet, and the global rage to eliminate the evidence of the post-war period of architecture as a social project. both tendencies–preservation and destruction–are seen to slowly destroy any sense of a linear evolution of time. 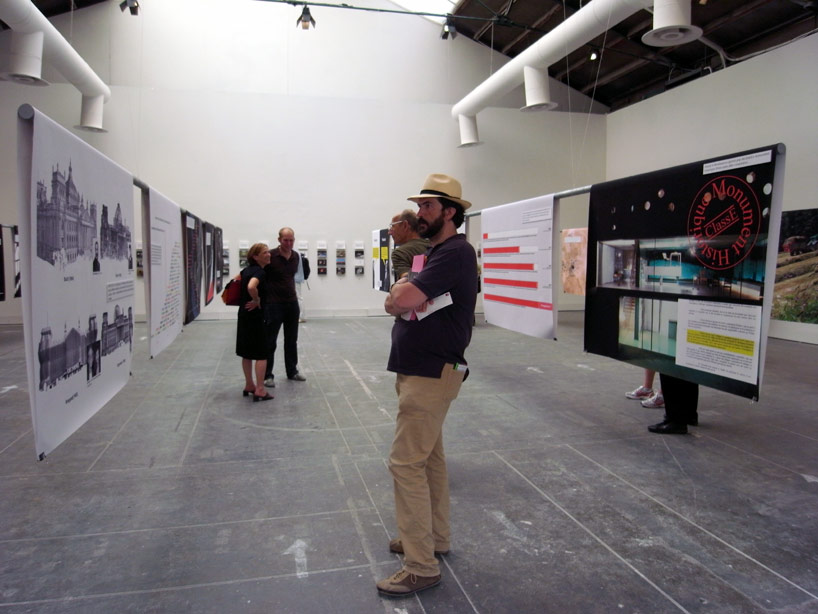 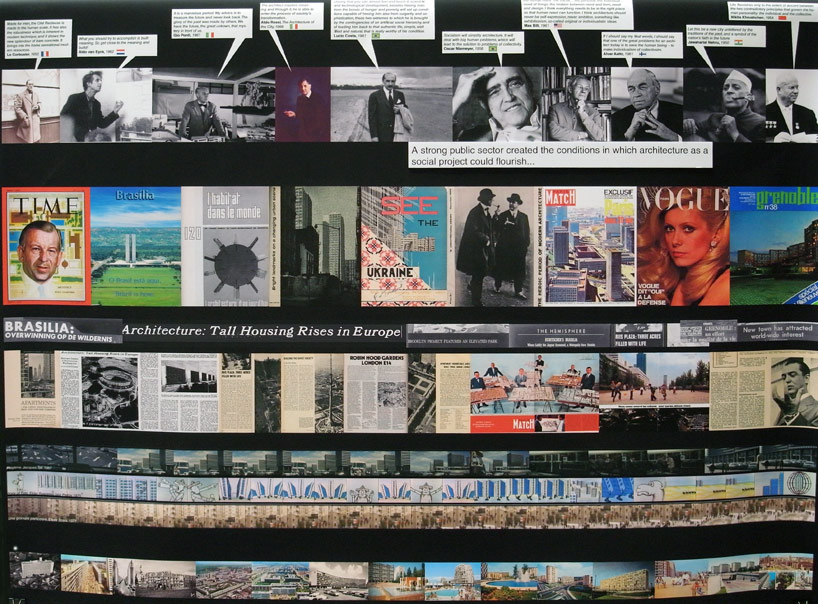 looking back on the years following the second world war, the architect’s strong role in the public sector created fertile grounds for architecture as a social project to flourish. 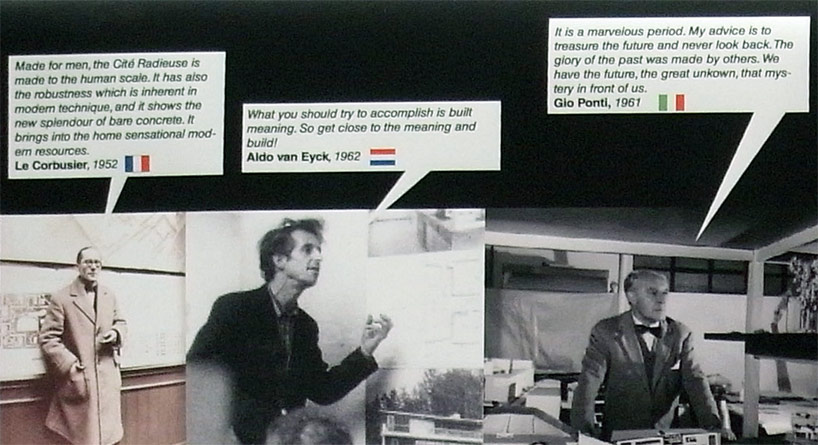 however, in recent times, the optimism that modernism embodied about the discipline’s ability to organize the social world is seemingly vanishing due to a public sector that has been debilitated by the market. the result is a global consensus that postwar architecture was an aesthetic and ideological debacle, the effect of which is can be seen by the elaborate and flamboyant architecture of today’s market economy, often built with a commercial expiration date. our complete resignation for contemporary building is evidenced by the passively short life expectancy of these structures, often constructed out of materials unsuited for eternity. 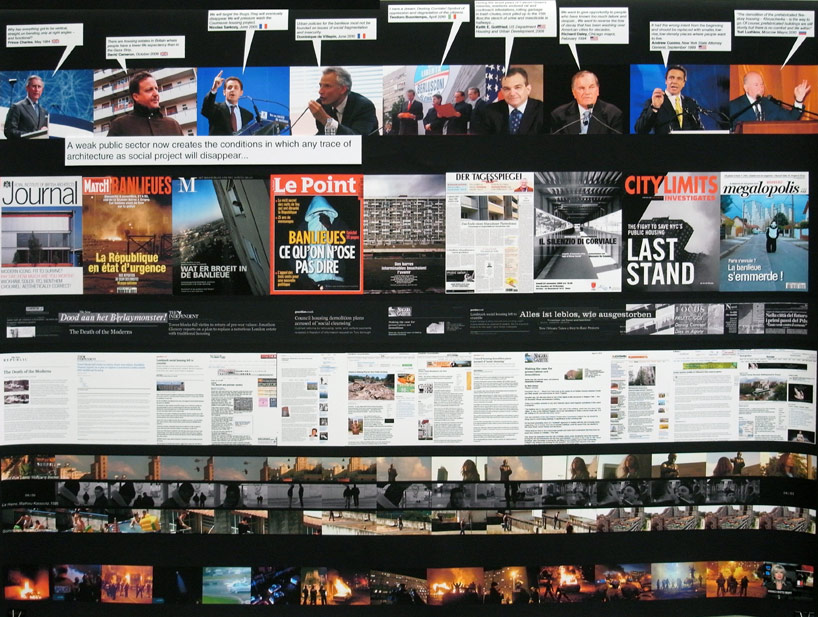 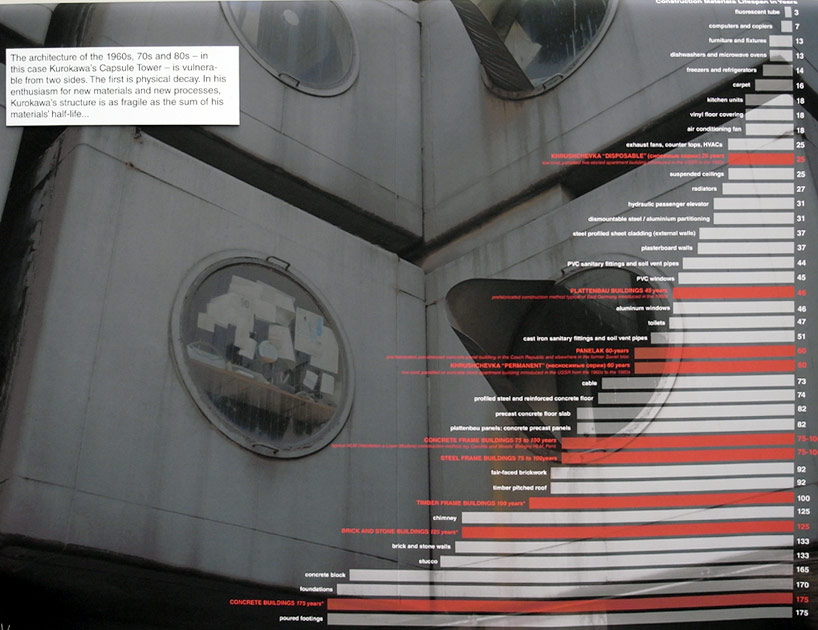 modern buildings have somehow escaped the collective body’s embrace of preservation, becoming a generation’s embodiment of an opportunistic financial envelope. 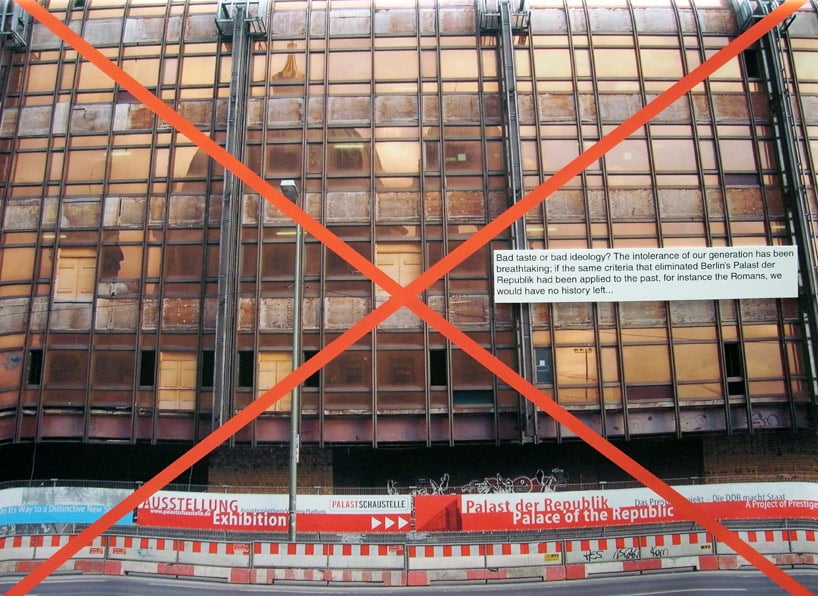 berlin’s ‘palast deer republic’ which was demolished in 2006 despite having a historic and integral part in germany’s reunification process. close-up of exhibited panel image © designboom 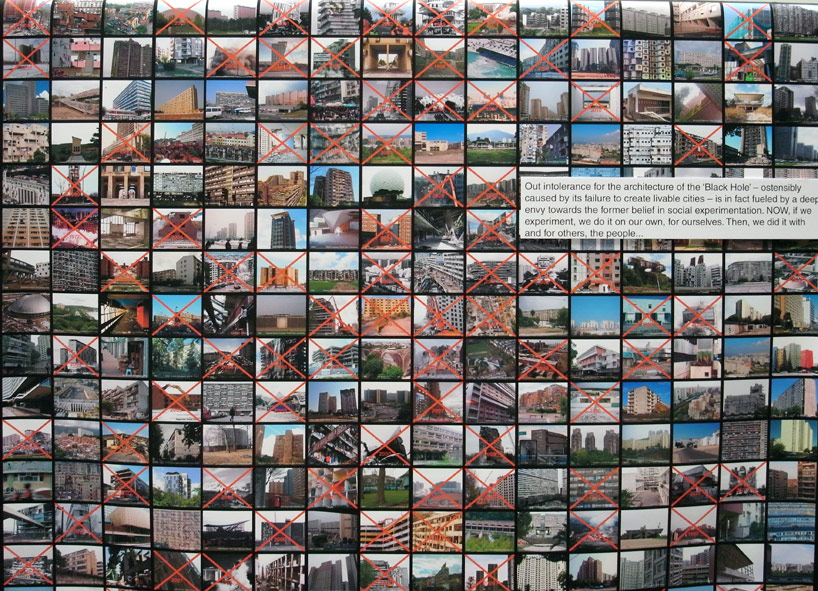 on what should be the other end of the continuum, there is, at the same time, a prolific global desire to preserve all other genre of architecture. in 1972, a UN convention on the protection of cultural and natural heritage set out the criteria of heritage selection which we still abide to today. nearly 12% of the planet is currently marked as ‘preserved’, continuing to cordon off greater areas as ‘off-limits’ at an alarming fast rate. these areas are declared as so without having actually been thought through on a transparent level. today, preservation does not quite know what to do with its new found empire.

in response, AMO developed a theory of its opposite: not what to keep, but what to give up, what to erase and abandon. it calls forth and aims to distill what exactly, as a society, we should consider of cultural significance, at the same time paving ground to reveal a liberated slate under the thinning crust of our civilization. 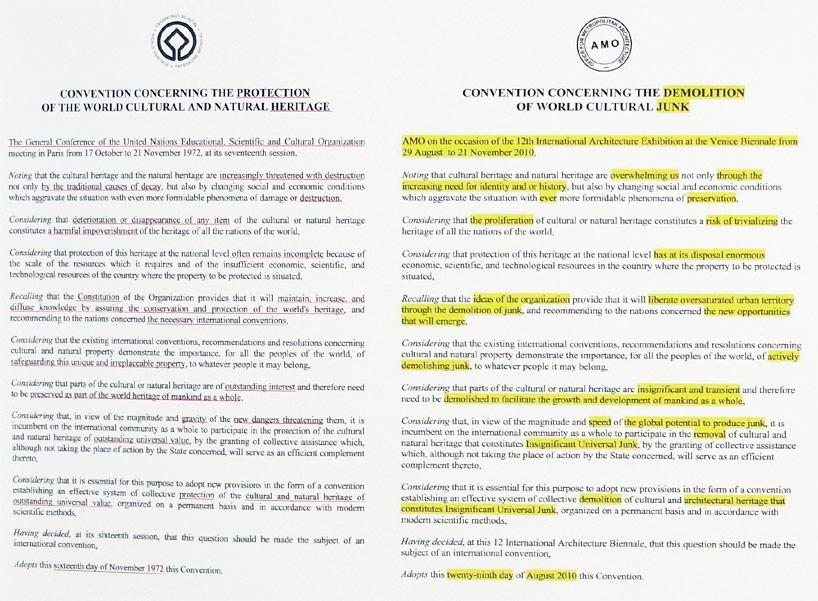 ‘considering that parts of the cultural or natural heritage are insignificant and transient and therefore need to be demolished to facilitate the growth and development of mankind as a whole… having decided at this 12 international architecture biennale, that this question should be made the subject of an international convention, adopts this twenty-ninth day of august 2010 this convention.’ close-up of exhibited panel image © designboom 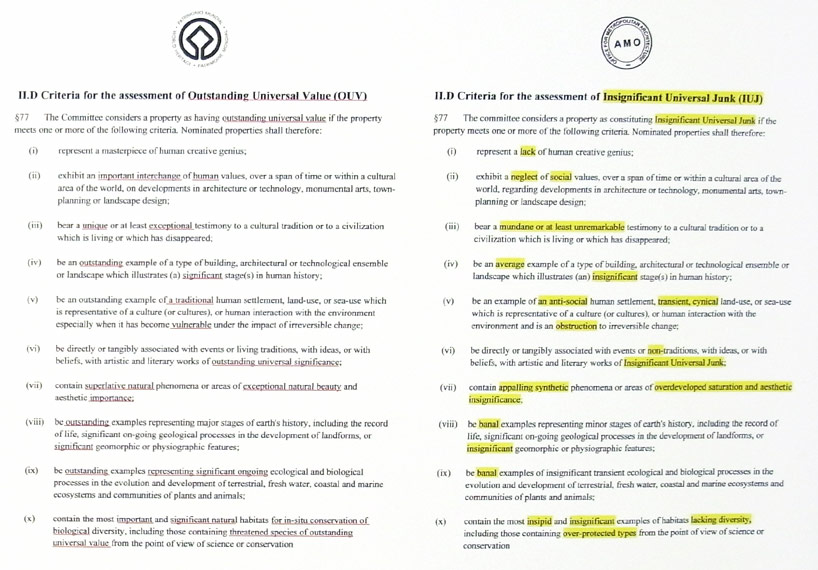 ‘nominated properties shall therefore: represent a lack of human creative genius; be an average example of a type of building, architectural or technological ensemble or landscape which illustrates (an) insignificant stage(s) in human history; contain appalling synthetic phenomena or areas of overdeveloped saturation and aesthetic insignificance’ close-up of exhibited panel image © designboom 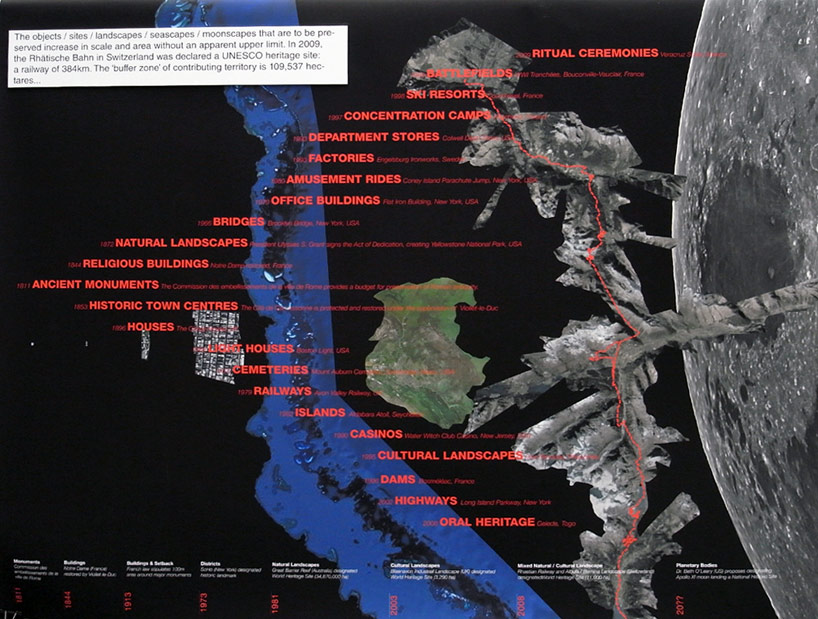 to facilitate this exponential growth of ‘rescued’ areas, there is in effect an ever-accelerating rate at which architecture is being declared as an item of permanence. OMA’s ‘mason à bordeaux’ (1998) earned preservation status merely three years after it’s completion. 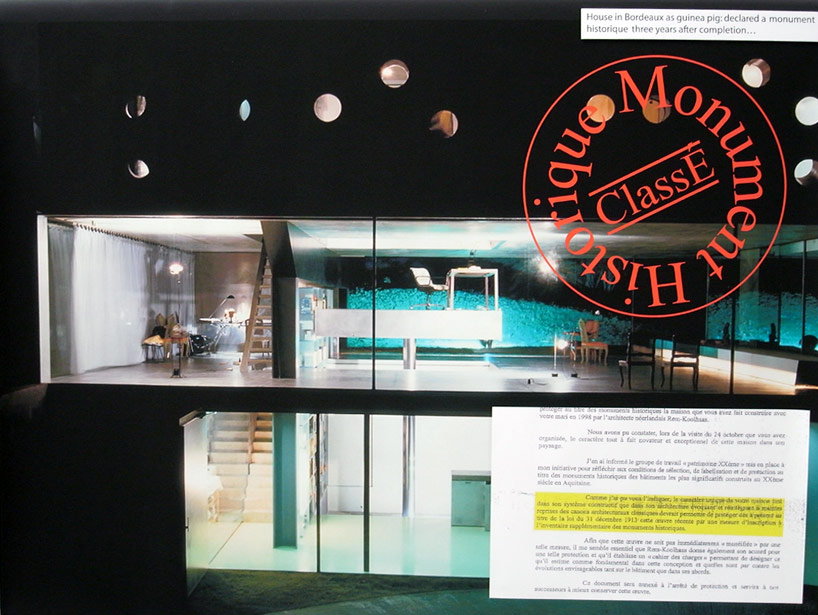 what results is a need for a building to predefine its status before it is even built. today, this clashing of two polar but intertwined directions–radical change and radical stasis–calls for a new system to mediate between preservation and development for our future. 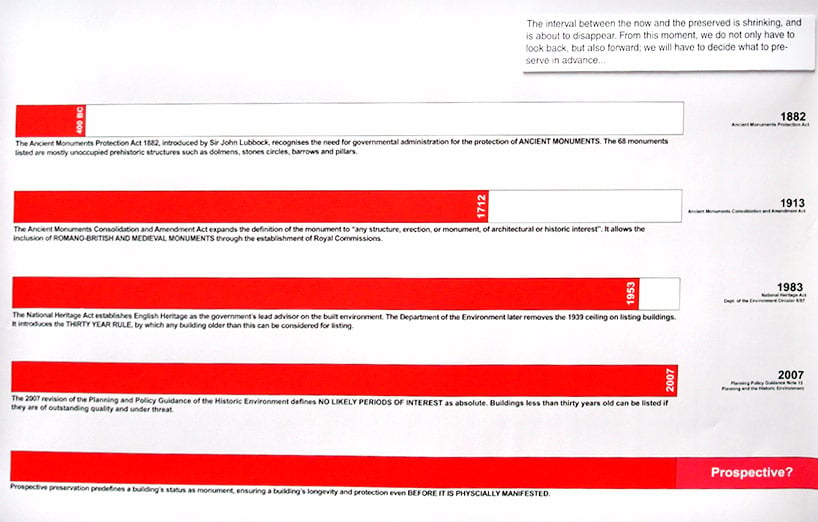 1882 – ‘the ancient monuments protection act 1882’, introduced by sir john lubbock, recognizes the need for governmental administration for the protection of ANCIENT MONUMENTS. the 68 monuments listed are mostly unoccupied prehistoric structures such as dolmens, stones circles, barrows and pillars

1913 – ‘the ancient monuments consolidation and amendment act expands the definition of the monument to ”any structure, erection, or monument, of architectural or historic interest”. it allows the inclusion of ROMANO-BRITISH AND MEDIEVAL MONUMENTS through the establishment of royal commissions.

1983 – ‘the national heritage act’ establishes english heritage as the government’s lead advisor on the built environment. the department of the environment later removes the 1939 ceiling on listing buildings. it introduces the THIRTY YEAR RULE, by which any building older than this can be considered for listing.

2007 – the 2007 revision of the ‘planning and policy guidance of the historic environment’ defines NO LIKELY PERIODS OF INTEREST as absolute. buildings less than thirty years old can be listed if they are of outstanding quality and under threat.

prospective? – prospective preservation predefines a building’s status as monument, ensuring a building’s longevity and protection even BEFORE IT IS PHYSICALLY MANIFESTED. 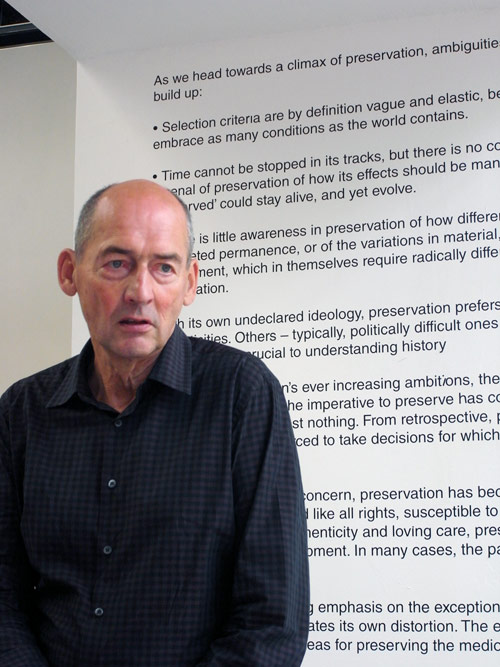 in our next and final segment, we will take a look at OMA’s discerning thoughts on how architecture should be approaching the act and practice of preservation with specific examples from some of the office’s previous projects.

following up on PART 1 and PART 2 of our feature on OMA‘s ‘CRONOCAOS’ exhibit at the palazzo delle esposizioni for this year’s venice architecture biennale, this is our third installation, going deeper into rem koolhaas’ views on the under-discussed topic of preservation.