BBC journalist/presenter sarah montague speaks to the designer of one of london’s newest and most controversial buildings.designboom just came across this video which has been released last week.the ‘hardtalk’ focuses on renzo piano’s latest creation – which is already loved, and also loathed – as he explains some of the overarching ideas behind ‘the shard‘ and its accompanying implications.

SM: art critic owen hatherly says ‘its a monument to wealth and power run way out of control, a flashing warning sign of disease’

I think there are different things.  on this one there is some distortion. when you go through this building you realize that what is open is the viewing platform that will be visited by three, four, five thousand people a day, and the office will be used by something like 5,000 people a day; they are not rich people, those people, they are normal people.

SM: you have to pay 25 pounds to go up on that viewing platform, isn’t it too expensive?

yeah the 25 pounds is too much, but in this town everything is 25 pounds. of course, I tried to tell them it’s too much, I tried, and everybody says‘in this town everything costs at least 25 pounds’…I agree its too expensive because one of the aims of this building is to give london back to the people, and tobe public. that it costs 25 is too much, for sure,  but the answer is that anyway this is the normal price. if you go to new york, to the top of the empire state building, you spend more than that. I think this is wrong, I think this is a bit bigot, if I can say this word. I’m not sure. ‘bigot’ in italian means a bit too moralistic, because if you look more carefully, you will see that this building will be used by 10,000 people every day.

SM:  how much of the building has been let?

I think only the restaurant, the hotel – the offices they are still being discussed. but it’s not un-let because they don’t find the tenants, it’s un-let because they have their own policy, and the policy of those people means that they wait for the right moment to let. the building, anyway, is not finished. the building will be finished in 6 months, one year…when you make a building like a city you don’t open a building in one day, you bring energy across the river, and then you make public transportation, and then you ake a vertical city, you make a building that lives 24 hours per day, it’s not one of those buildings that closes in the evening. 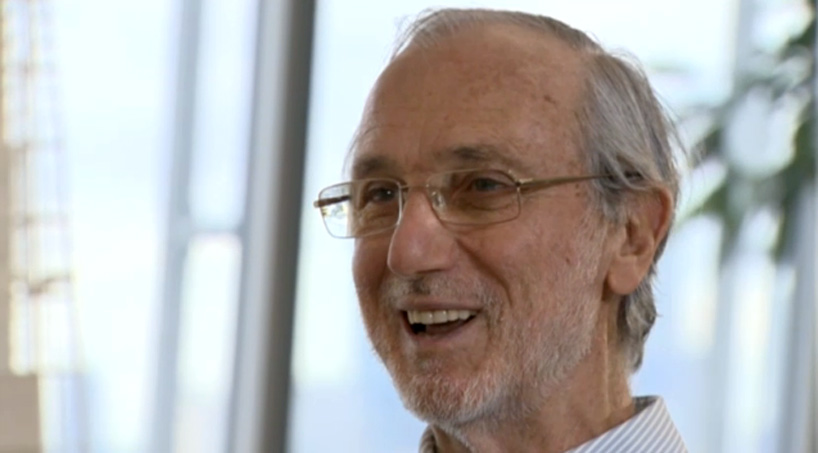 SM: it’s quite interesting when you talk about vertical cities. in a way, that was a fashion at a certain time for streets in the sky, now there’s a move away from highrises, because people don’t want to live on top of each other, that actually you can get more density and a more efficient and better living space with old fashioned terraces.

yeah but this is wrong, i’m sorry, I think it’s totally wrong. today, the 21st centry discovery, the most important one, is the fragility of earth, and we know now we have to be sustainable. and the most unsustainable thing you can think about is the periphery: the immense sprawl of nice beautiful little cottages and little houses. forget it. it’s impossible, it’s cost-wise impossible, it’s not sustainable in any sense, just a romantic idea.

oh no, the energy you spend in this building is 10 x less than what you spend in a little village that’s for sure. a building like this, especially this building with the system we used to keep the radiation out is incredibly efficient. you’re right that the crystalinity of the building comes from that.

SM: so even if you’re tackling the problem of the banlieue, the paris suburbs, you would suggest that you build these high-rises, you create cities in the peripheries?

no I’m not saying so. no, I just suggested that the solution for cities is not to make a new periphery; and you know a city grown today is not solved by making a new periphery and creating new tragedy.

the solution is not expansion by explosion, the solution is expansion by implosion. that is the opposite.  it’s actually the only sustainable growth in the city, especially in a city like london, is to grow from inside. building on what we call ‘brownfield’. I’ve built in my life, always, on brownfield. in berlin I built on brownfield, it was the little space left between east and west berlin for 45 years. but you know, in cities you have always the possibilities to grow.  it doesn’t mean that I preach the value of making tall buildings everywhere, I’m just saying that from time to time in very few cases with miracles like this one, it makes sense to go up and to show that energy.