the existing marseille provence airport campus in france reflects a history of successive extensions and interventions centered on an original building designed by french-algerian architect fernand pouillon dating from the early 1960’s. to this sober, rational-modernist centerpiece had been added richard rogers partnership’s first realized airport, a project dating from the late 1980’s. this competition for the extension of the marseille airport reflects the terminal’s need to anticipate significant growth in passenger numbers as well as an ambition to place the airport and the region it serves more clearly on the international map. 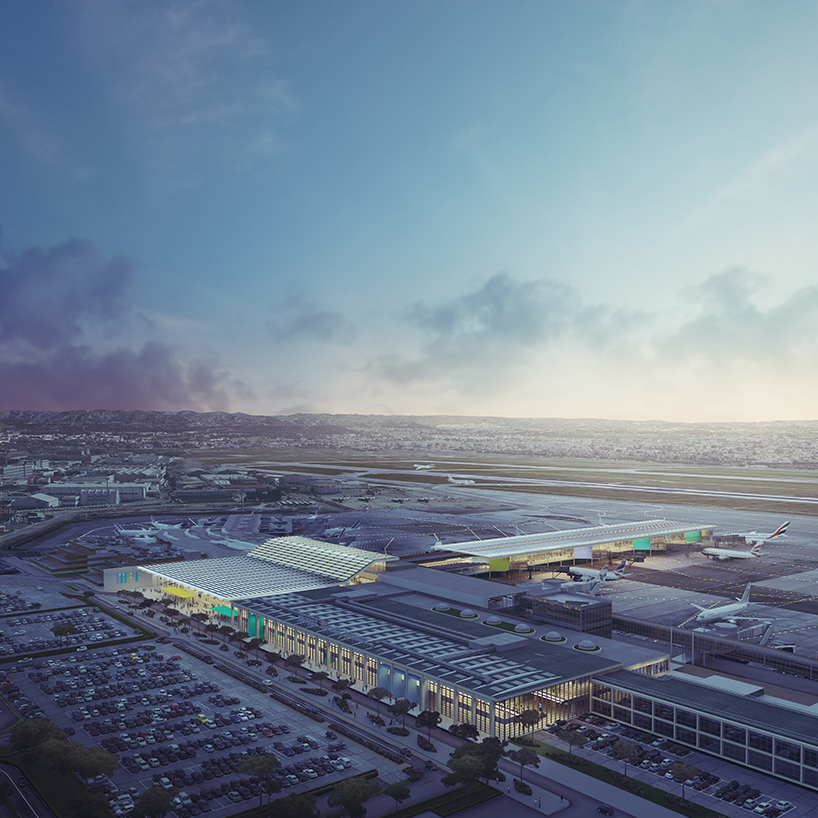 the client brief foresees the construction of a new ‘heart’ for the airport — housing the main passenger processing and substantially increased retail offer in a new state-of-the-art building. thereby shifting the center of gravity away from the existing pouillon hall – as well as constructing a major new pier. this new heart not only serves as a distributor connecting a number of existing, previously separate, airport facilities but seeks to link these architecturally. in particular, this project offered a rare opportunity for rogers stirk harbour + partners, or RSHP, to revisit one of the earlier projects and consider how best to complete and make coherent an incomplete architectural ensemble currently composed of buildings of very different and distinctive styles, reflecting each respective era’s varying attitudes to air travel and terminal design. 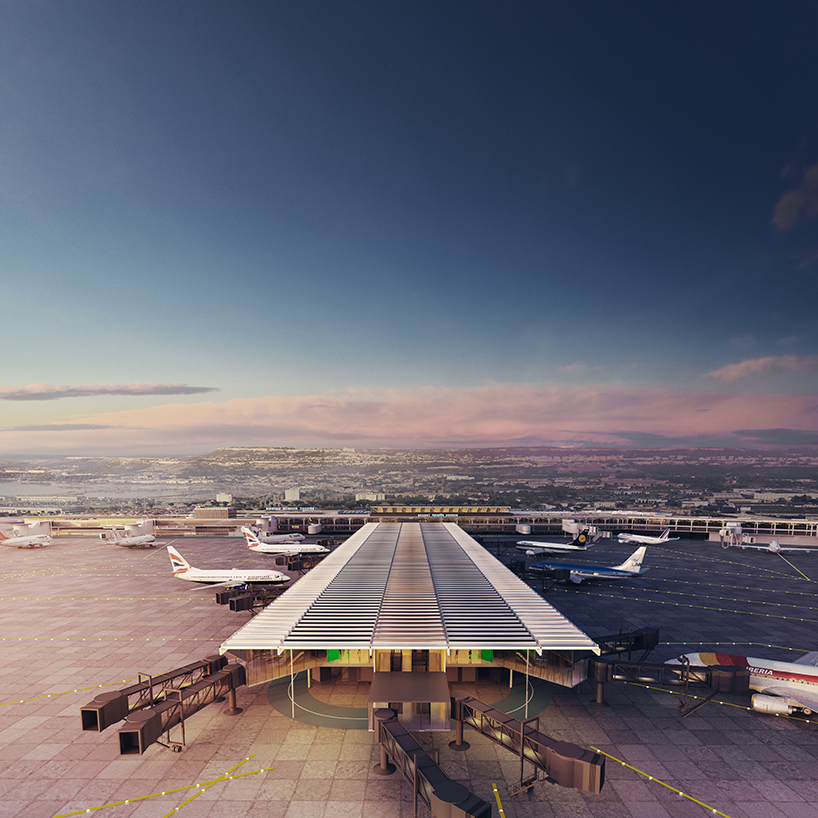 aerial view of the proposed new pier, in the continuity of the new ‘heart’

the approach adopted by rogers stirk harbour + partners was one based on careful insertion. the proposal sought to pay homage to the existing architecture and contribute to the creation of a new identity for the airport whilst also delivering a cohesive, harmonious whole in which old and new complete each other rather than compete. the architects achieved this by clearly articulating and aligning the different volumes proposed; by extending the roofline of the pouillon building as well as the grid and rhythm of the façade —  by seeking to complete and reveal the original rogers structure that constitutes the airside identity of the current terminal and carefully repairing the existing fabric where required. 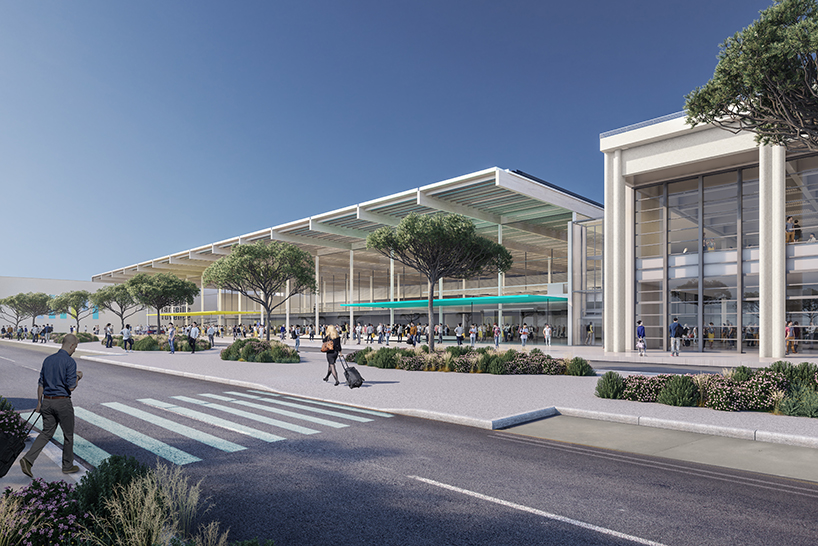 the new ‘heart’ reconciles the rationalist rhythm of the hall pouillon with the lightweight, luminous architecture

the new ‘heart’, bounded on 3 sides by existing buildings, unites the passenger processes within a flexible, generous building of great simplicity, privileging functional clarity and fluid passenger movement as well as offering operational flexibility. the architects aimed to declutter spaces and reveal the qualities of the existing buildings lost as a consequence of aggregated piecemeal interventions. RSHP’s proposal reorganizes and unifies the check-in halls, clarifies the baggage claim hall into a single volume, provides an open, adaptable platform for security screening and retail organized around a linear plaza, the social hub at the center of the new terminal. the proposed restructuring locates departures in the existing pouillon hall and arrivals in the new heart, contributing to clear, intuitive way-finding, and to the legibility and separation of the passenger flows. a single roof design serves to the link the new heart with the proposed new pier under a fluid, elegant, environmentally-intelligent ‘flying carpet’.

the landside elevation: a new shop-window in the marseille provence airport

building on the team’s experience of other environmentally-ambitious airport buildings, notably rogers stirk harbour + partners’s current lyon and geneva projects, the competition entry targets french HGE certification. in addition to the upgraded mechanical and control systems, this is achieved architecturally through a combination of passive measures including a timber roof structure, deep overhangs and careful solar-shading. the roof serves as support to a field of solar photovoltaic panels and houses a carefully disposed array of rooflights. the system proposed is constituted of modular pre-assembled cassettes in a fine grid that can be arranged in configurations that are adapted to the specific requirements of each space and function. the roof design also gives directionality to the building aiding way-finding. the deep roof overhangs enable generous, unobstructed views and daylight whilst also carefully controlling solar gains.

the new arrival hall in particular is conceived of as a startlingly transparent shop-window onto the airport, marseille and its region. the proposed interiors express both warmth and lightness: the building’s palette combines natural timber, steel, concrete finishes along with fine touches of bright color echoing the skies of provence and the mediterranean, the play of light and shadow, so characteristic of this beautiful corner of the south of france. the project represents 70,000 square meters of new build in addition to the refurbished, repurposed or reorganized areas within the existing. 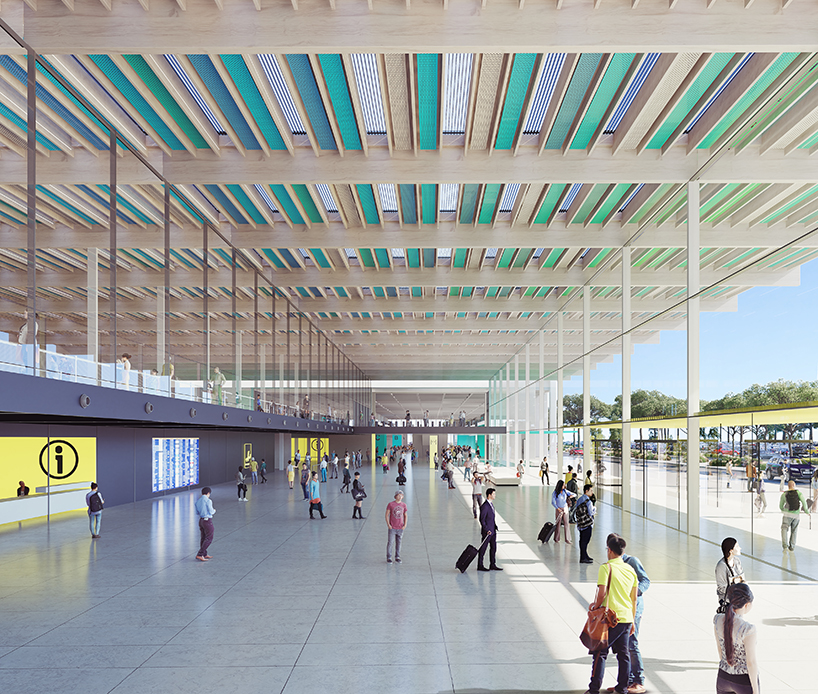 the arrivals hall in the new ‘heart’: an extension to the existing hall pouillon 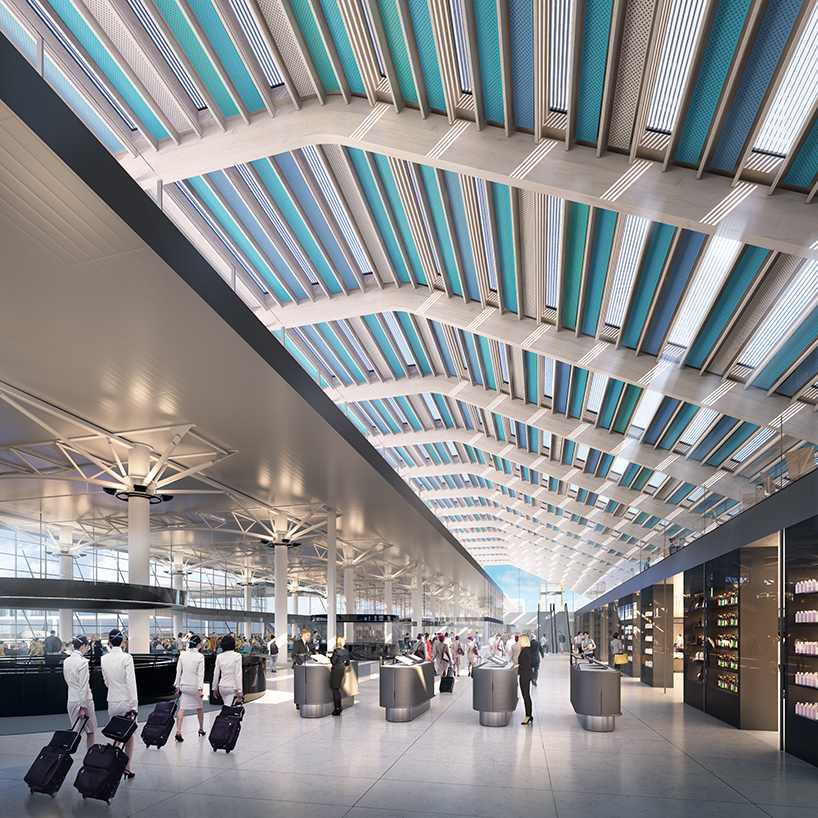 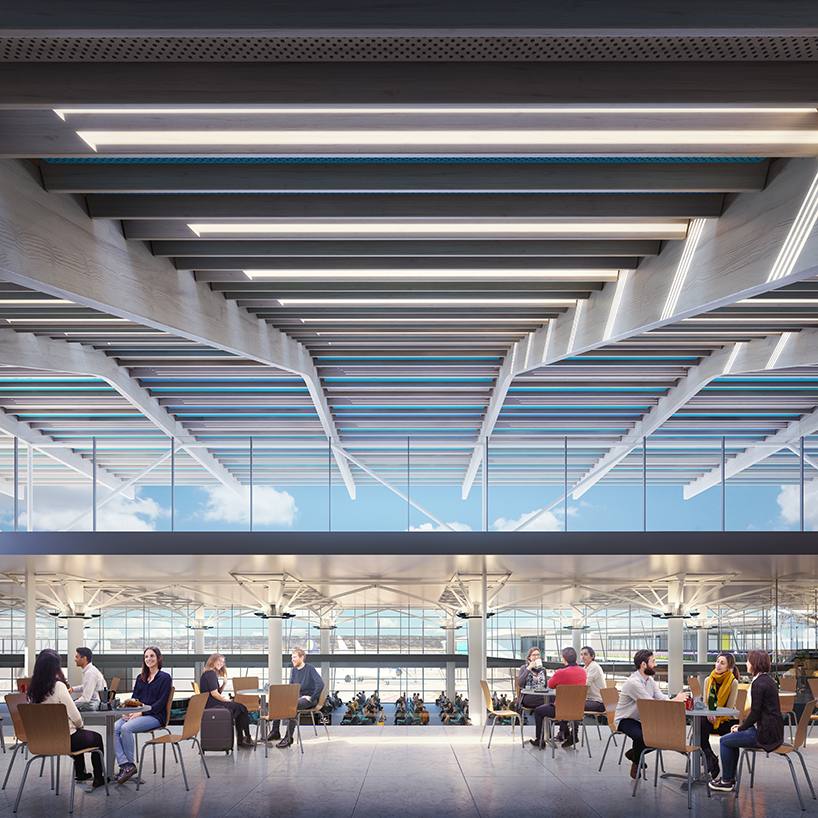 the terrace, which houses a café, restaurants and the airlines lounge, overlooks the central square

the pier at departures level offers intuitive way-finding and generous, unobstructed views of the airfield