ronald lu & partners has completed a modern garment manufacturing plant in china that is integrated with the landscape in which it sits. located in guilin, a city in the northeast of china’s guangxi zhuang autonomous region, the project is billed as a ‘sustainable development garden’. the total area of the first and second phases of the project — titled ‘integral’ — stretch over a 511,800 square-meter site. the first phase was completed in 2019, and the entire project is expected to be complete by the end of 2020. 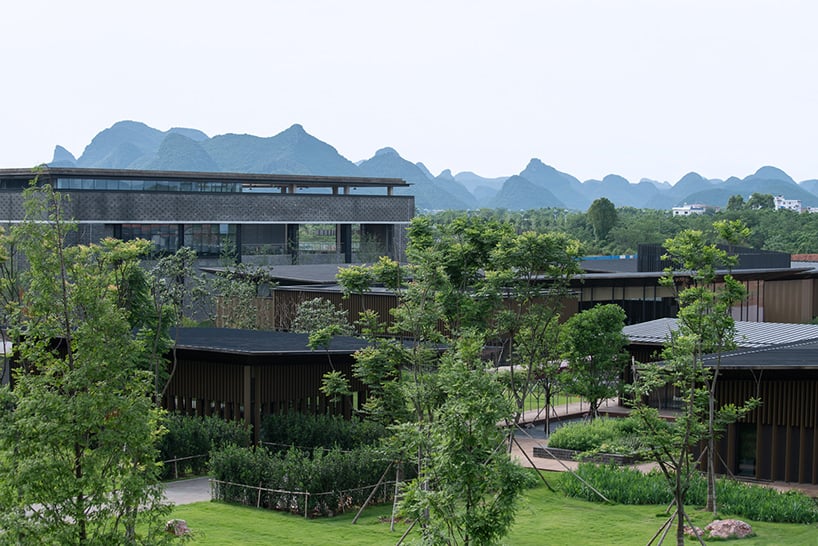 the development has been driven by esquel, a textile and apparel manufacturer that wants to change the ‘low-tech’ image of textile manufacturing. instead, ronald lu & partners (RLP) was asked to integrate conservation elements and sustainable design as part of a new, state-of-the-art complex. consequently, the facility is more than a manufacturing plant. it is also an industrial eco-tourism park that the architects say embraces ‘the fundamental concepts of buddhism’. 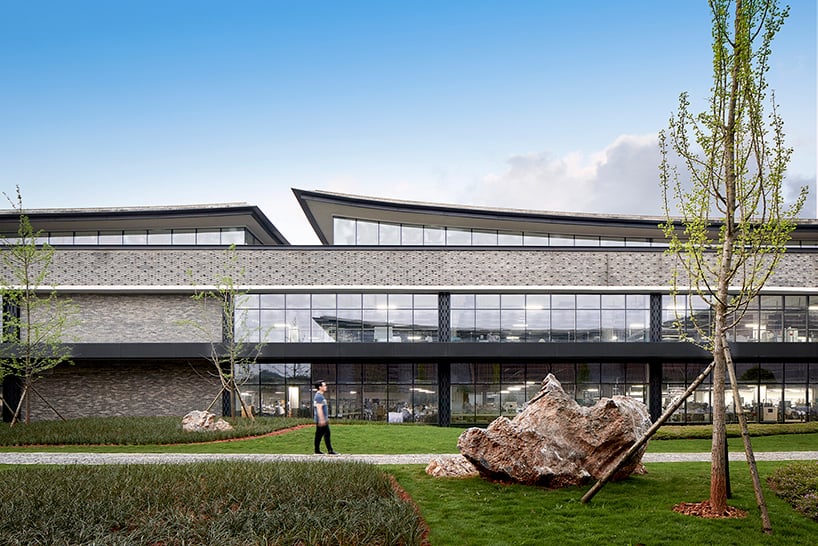 as the client believes that enterprises should play a critical role in protecting the environment, the design seeks to nurture the wildlife found on site. for example, water is recycled and other resources are replenished. the project began with studies of the site’s topography and geology, as well as the history and culture of guilin and the area’s local characteristics. the overall plan was to create a brand new conservation-led development that united manufacturing, tourism, and agriculture. 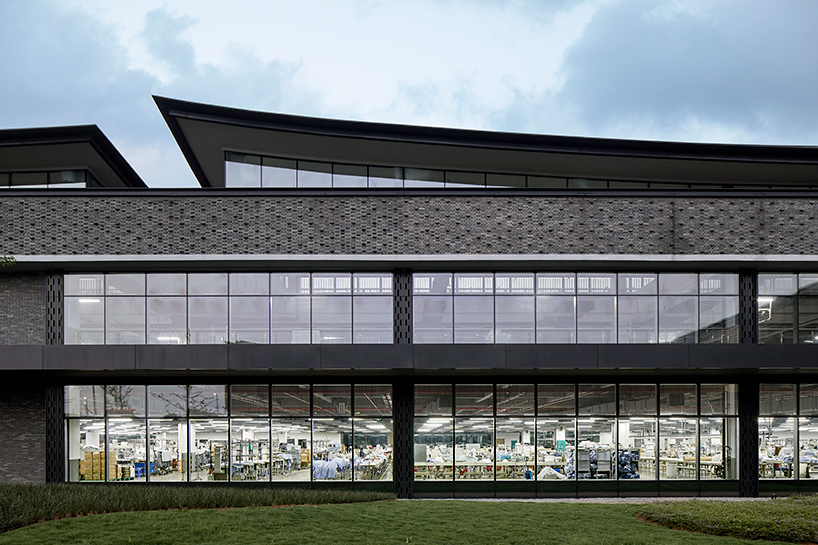 to create an entry point to the complex, the design team restored part of the existing industrial site to its original wetland landscape. the architects then placed large building blocks on the expansive dry area to the south which had been degraded by long-term excavation caused by the old factory’s activities. the idea was to retain the site’s ecology as much as possible, including its bamboo groves, fish ponds, and wetlands. RLP worked hard to restore the site’s original lake and then placed small-sized buildings along its shoreline. 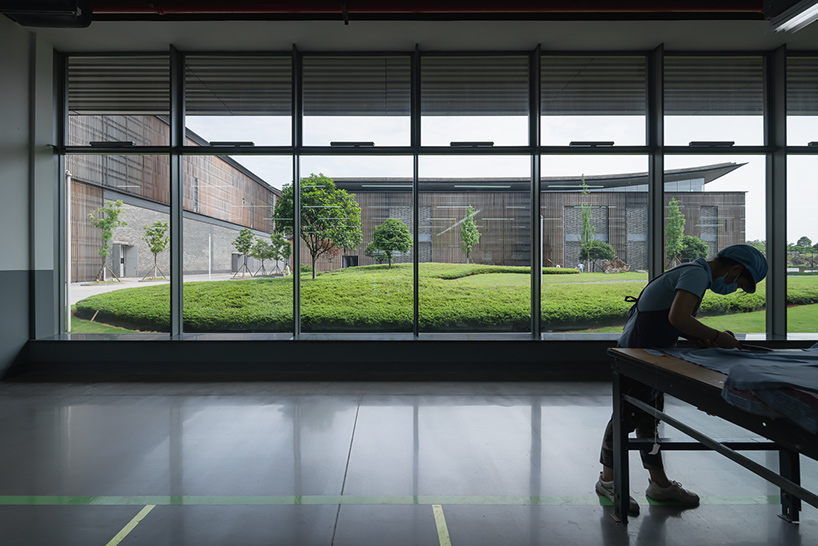 apart from the core textile workshop and craft center, the project also features botanical gardens, plantations, exhibition halls, staff restaurants, learning centers, and other facilities. the project’s second phase will include a commercial area and a performance center. meanwhile, a rooftop farm will provide fresh organic produce for the staff restaurant. 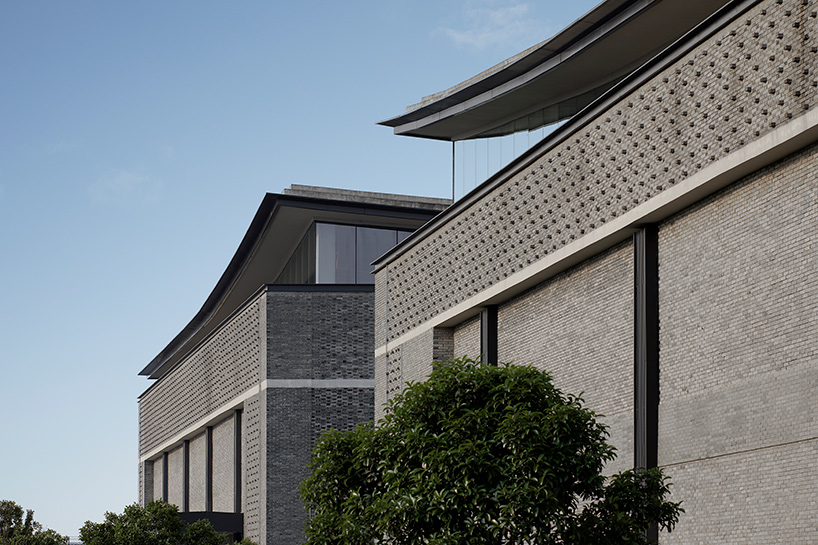 the highest point of the entire project is only 22 meters (72 feet) in elevation. the horizontal design integrates the large production workshop and craft center with the natural environment. in turn, this makes the site’s greenery the main focus, with the buildings playing a supporting role in the overall aesthetic. the materials used — blue bricks, grey tiles, and bamboo — reference the area’s ancient villages and pay tribute to the region’s traditional building techniques. 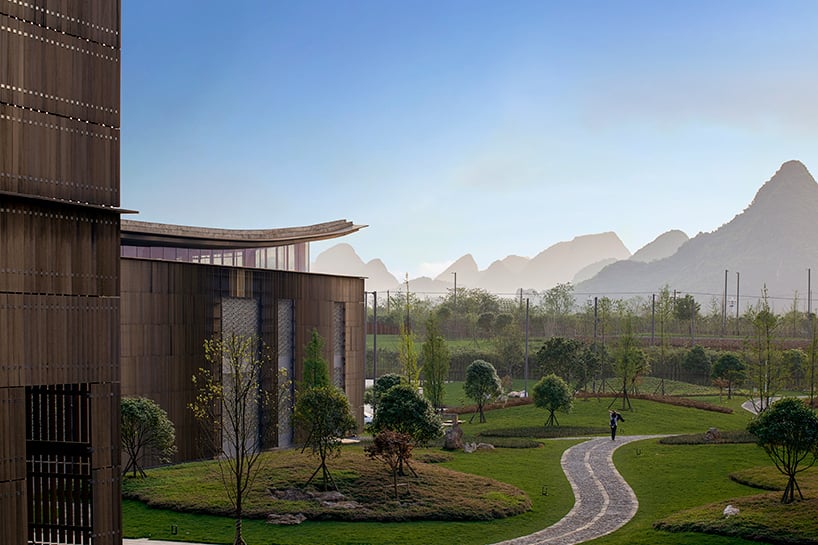 the architects added a semi-transparent bamboo curtain with a gradient to the façade of the craft center’s blue brick wall, creating the effect of a window screen covering the wall. the curtain merges with the surrounding trees and flowers, while breaking up the building’s long exterior façade. the semi-closed bamboo façades enhance natural ventilation to ensure a more comfortable experience in the heat of summer. meanwhile, during the winter, the restored hill slopes become a natural screen that blocks the cold northeast winds. 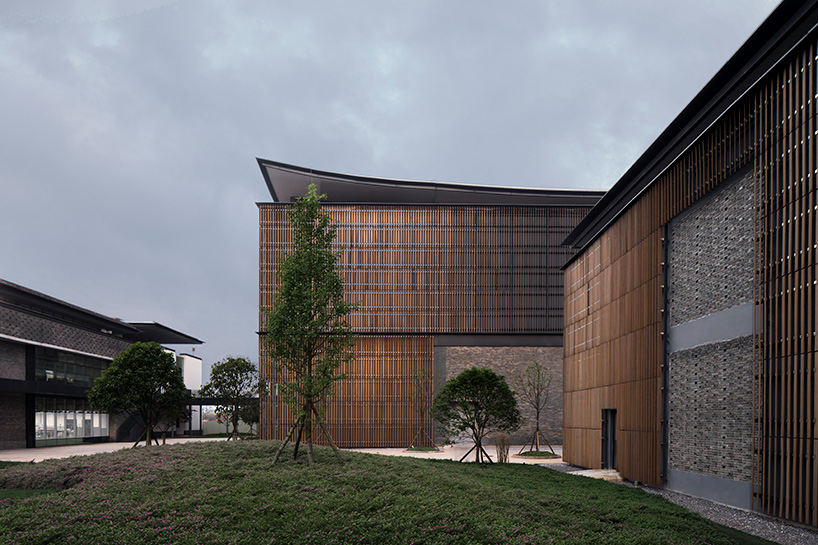 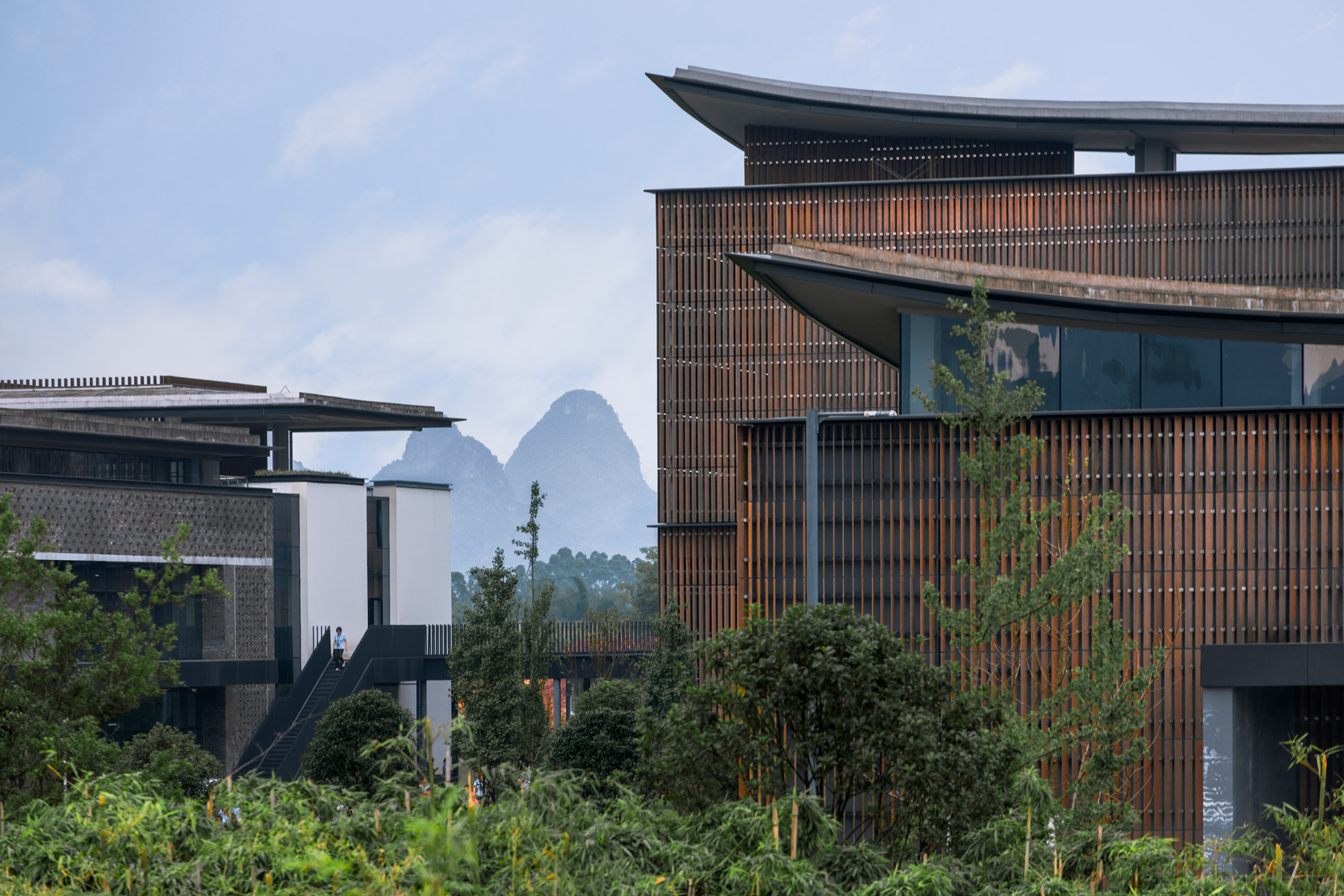 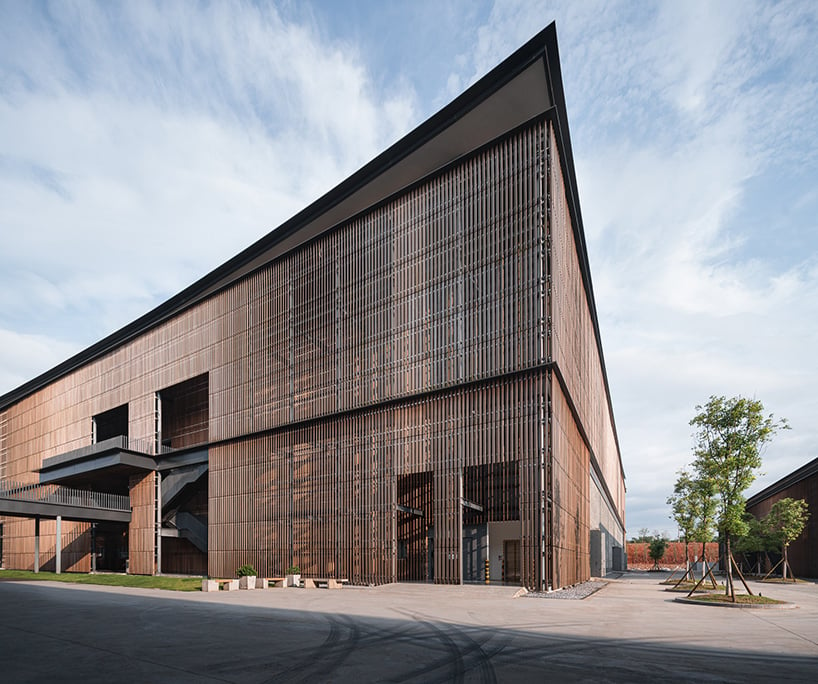 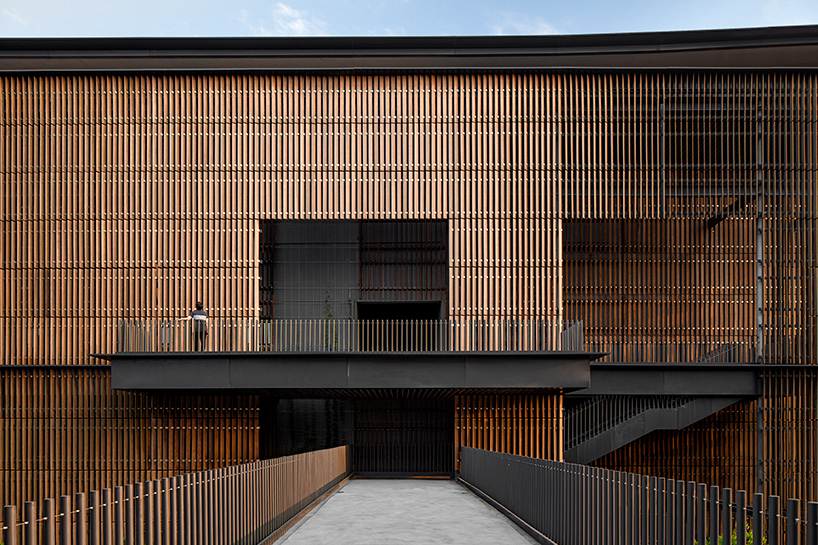 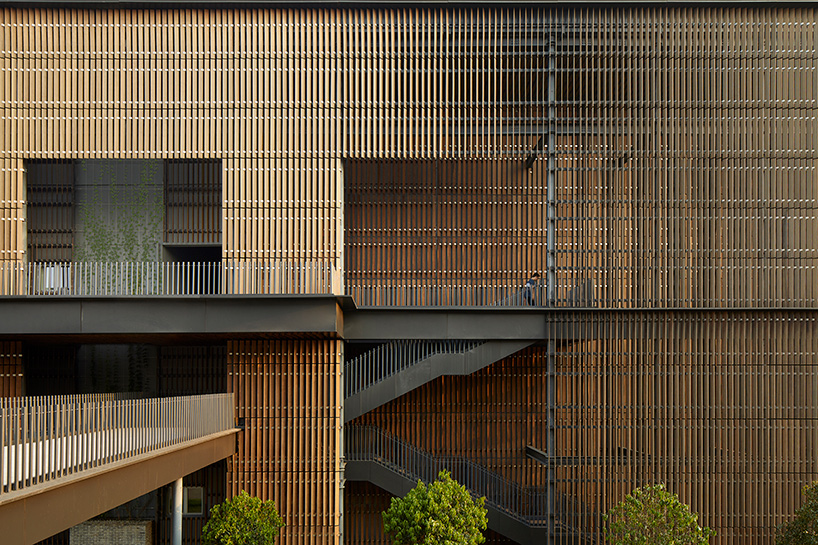 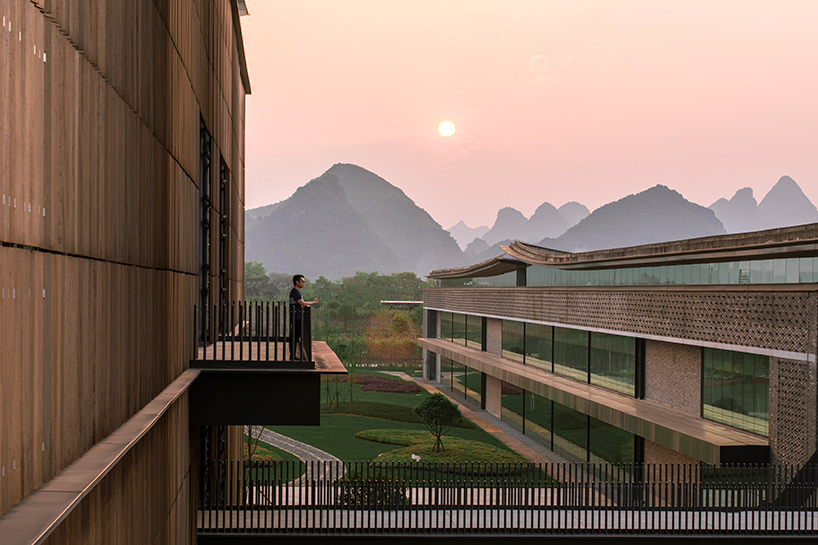 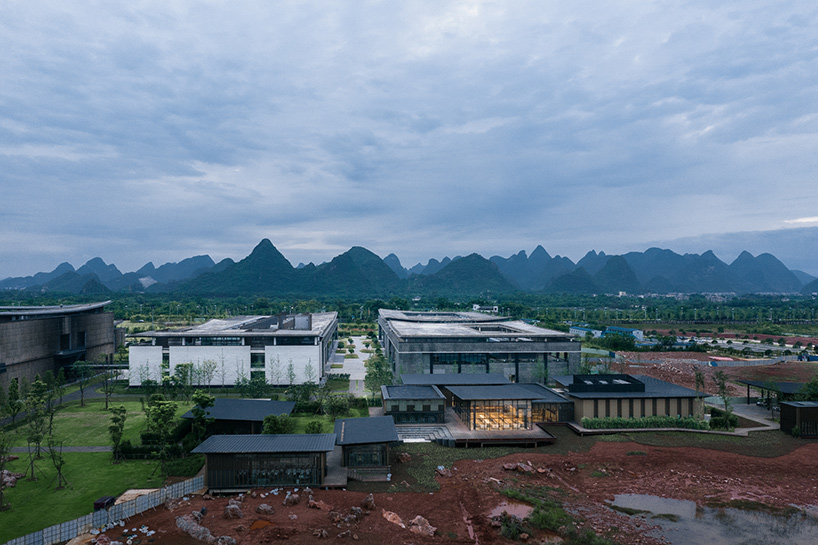 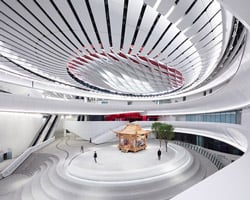 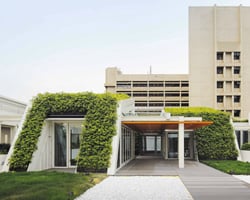 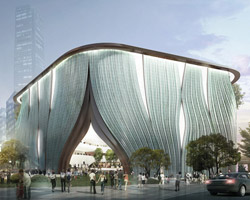