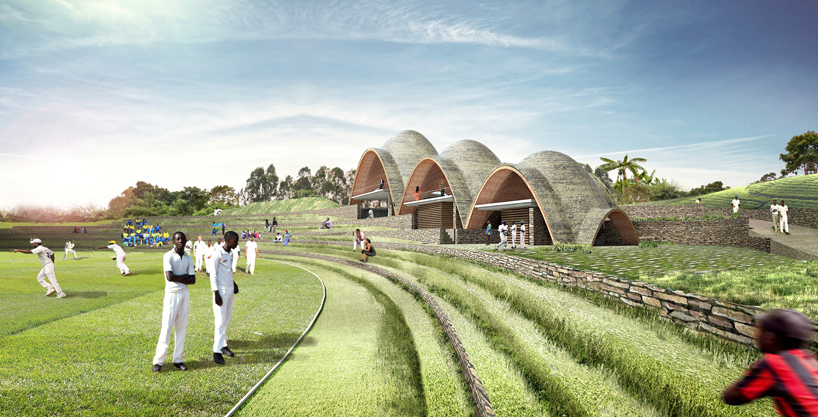 a crowdfunding campaign has been launched for a new international standard cricket stadium and pavilion in kigali, rwanda. the development is seen as an opportunity to empower and engage local people who may be in need of work, skills, and income. though the use of local materials, rainwater harvesting, and land use technologies, the project is intended to catalyze sustainable development within the east african country, while simultaneously providing its citizens with valuable skills. 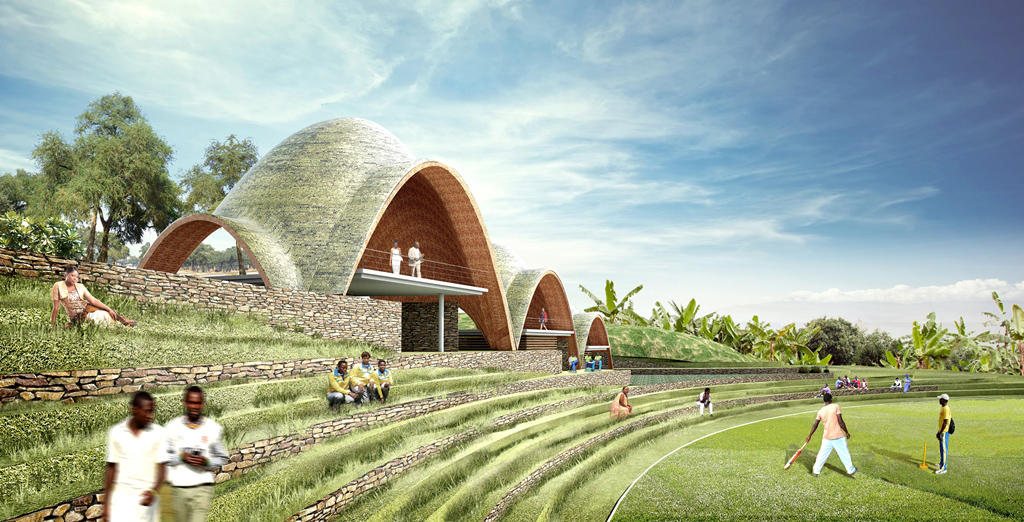 initiated by the rwanda cricket stadium foundation (RCSF), and planned in partnership with the rwandan cricket association, the facility will be non-profit and will operate a ‘sport for all’ policy to ensure that rwandans from all ages, genders and backgrounds can have access to cricket — one of the country’s fastest growing sports. rather than a conventional cricket stadium, the scheme seeks to create a distinct social setting that complements the beauty of the green rwandan landscape. 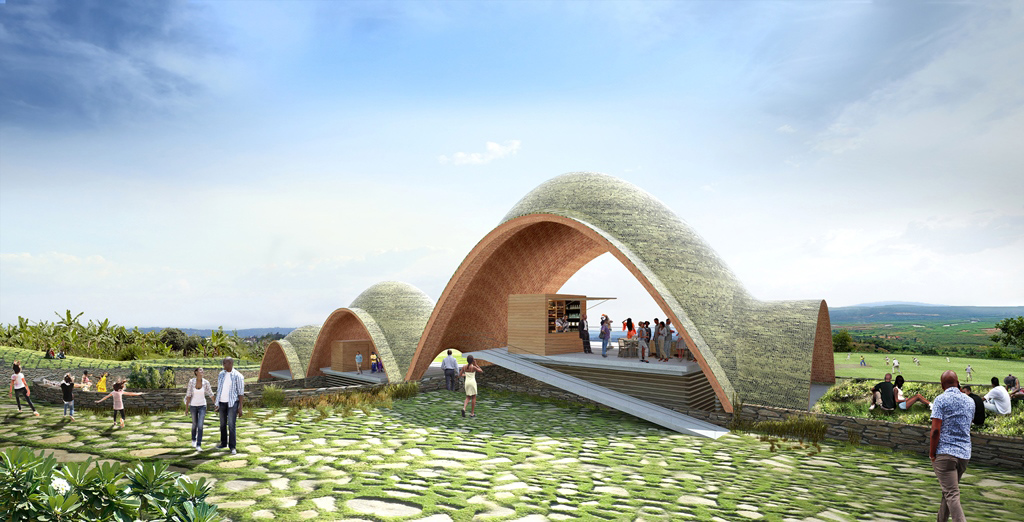 the cricket ground and pavilion will be constructed on a 4.5 hectare plot on the outskirts of kigali, rwanda’s capital and largest city. the multi-phase construction will be overseen by its architects light earth designs, who are pioneering the technique of catalan timbrel vaulting using soil stabilized technology. the pavilion’s vaulted forms trace the movement of a bouncing ball, with the largest vault — which houses the main social areas such as the bar and restaurant — spanning a total of 16 meters. 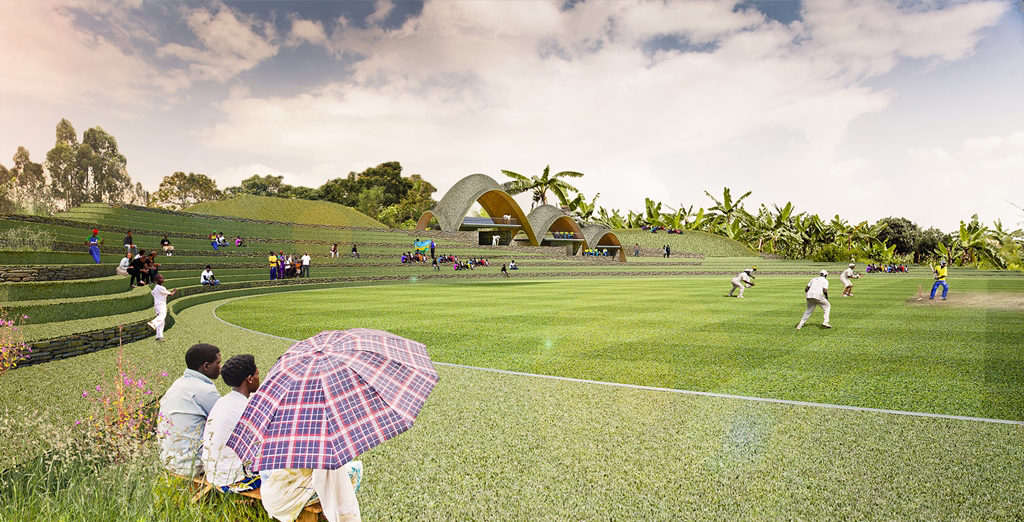 each vault is covered with broken recycled ceramic tiles

the next vault, at 12.5m, contains the player and umpire dressing rooms, as well as a clubhouse, which will offer free HIV testing to the local community. finally, the smallest vault houses club offices, storage, and a press viewing area. each vault is covered with broken recycled ceramic tiles using a catalan technique called ‘trencadis’. the tiles are laid in a pattern generated by ‘pixelating’ the natural surrounding foliage, allowing the building to form an extension of the landscape. 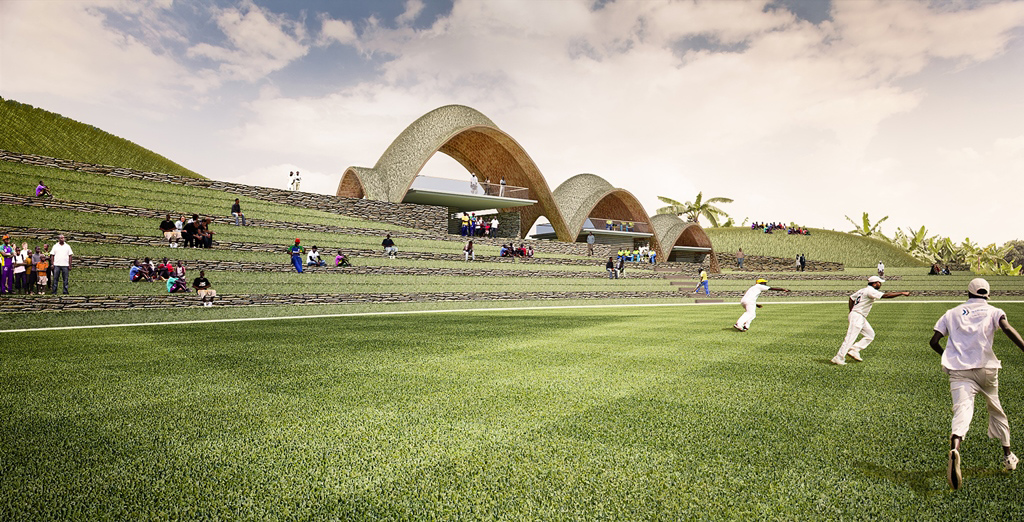 the building appears as an extension of the landscape

the pavilion is to be built using predominantly local labor, with households from the two poorest categories of the population recruited to work on its construction. it is imagined that the cricket ground will provide education for local youth, create jobs, demonstrate the use and benefits of sustainable design, and bring new building technologies to rwanda’s construction industry.

the objective of the new ‘pavilion appeal’ campaign is to raise £250,000 to complete the building and launch the new stadium in kigali. the fundraising campaign ends on december 15, 2016.