anticipating the need for transport and infrastructure to support the explosion in popularity of online shopping, spanish architect saúl ajuria fernandez has shared his idea for a ‘droneport’, based in madrid. given that 80% of package deliveries weight less than 2kg, and have a volume less than that of the average shoe box, it looks like drones are almost certain to be the postmen of the future. 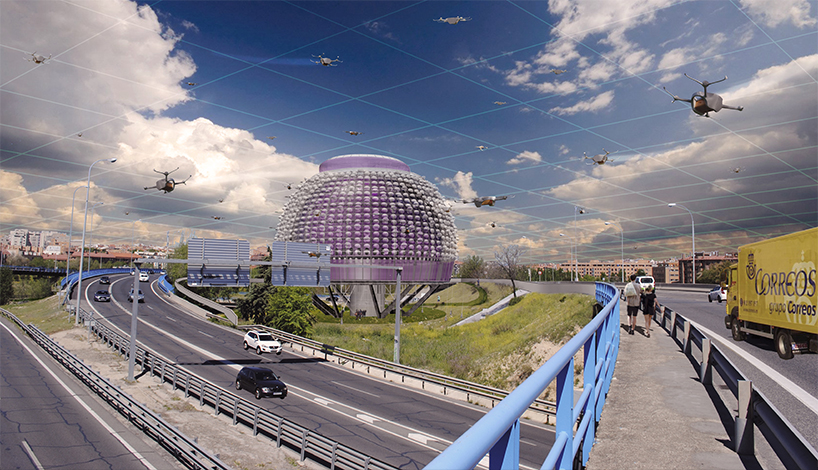 saúl ajuria fernandez’s aim in approaching the project was to design a building that could facilitate and optimize the transport of goods using remotely piloted aircraft systems in urban areas. his plans include both the necessary architecture and relevant supportive infrastructure required for the city to adapt to its new delivery system. the project is innovative in designing new distribution systems, new elements for the reception of packages and in general, and a new network of infrastructure. 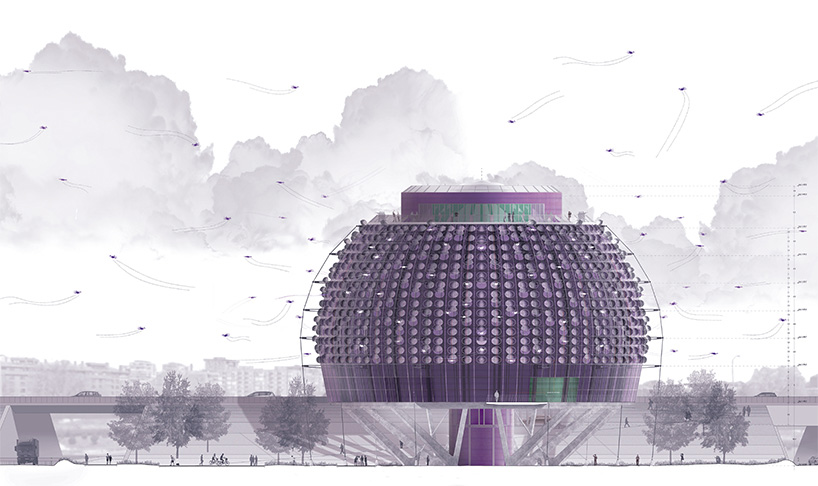 fernandez has located the project in madrid, within the south node of the m-30 road. the node is characterized as being a disused urban vacuum, that still lies within optimal range of a collection of urban centers — connected via a number of high-speed transit routes. organized into a large sphere, the droneport removes itself from its noisy and aggressive location by focusing its program inwards. a central courtyard draws light into the space, and creates a visual relationship between the separate floors. its spherical shape a circular development in both plant and section, favors the distribution and management of packages and minimizes the chance of turbulence for flying drones. 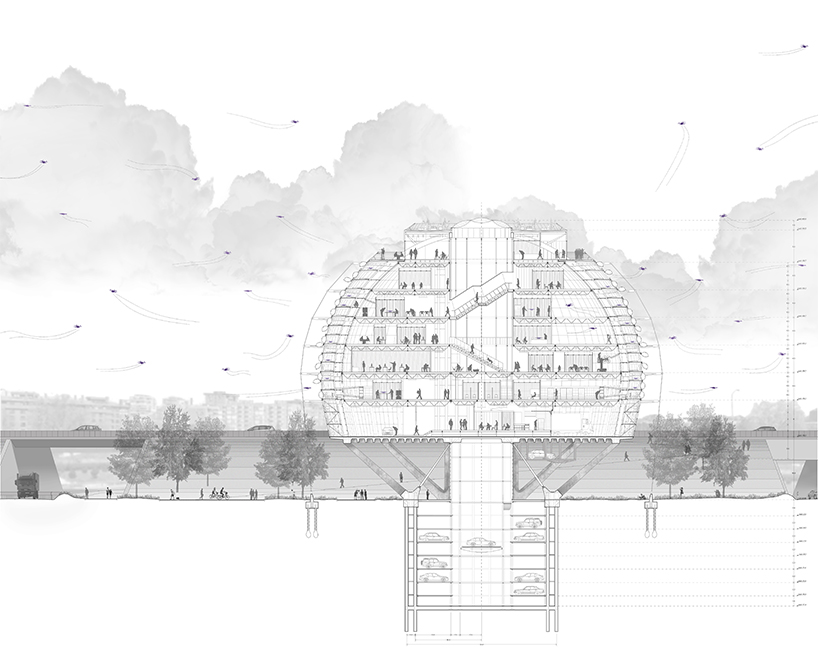 fernandez has located the project in madrid, within the south node of the m-30 road

the urban droneport program consists of a logistics center and state institute of technology development associated with the RPAS (remotely piloted air system). while the logistics center is located in the lower levels, the institute for technology development covers the upper floors and generates a micro-society of research and training. a modulated overall design means that any of the sphere 12 ‘slices’ can be expanded or changed independent of the whole. its metal structure is equipped with dry joints for ease of modification. similarly, the drones’ hangar are based on industrial storage systems and can be modified according to the centre’s needs. the hangar doors are equipped with solar panels, covering much of the energy demand of the building.

the design extends to include a futuristic set of post-boxes capable of accommodating both individual and communal drone deliveries, and looks to establishing an emergency health network between hospitals, or between citizen security networks. 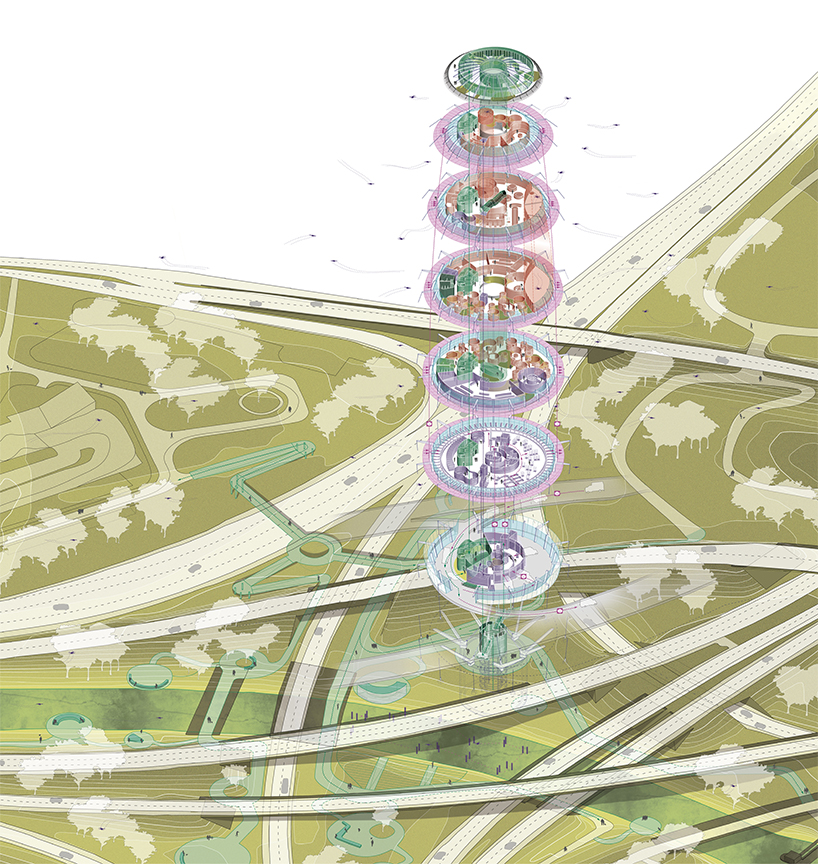 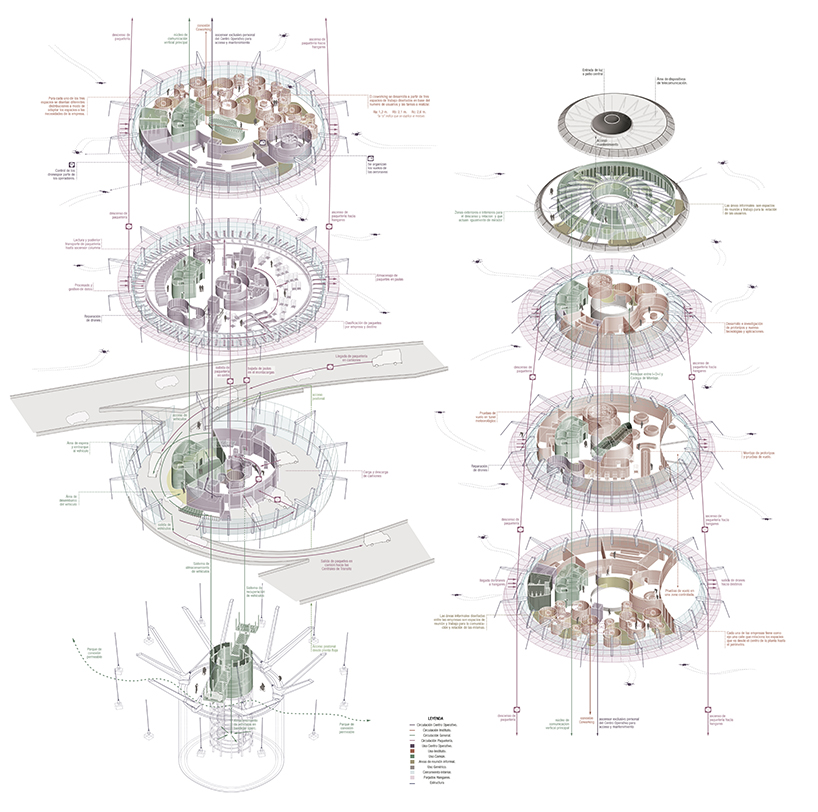 exploded axonometric of the processes that take place in the building 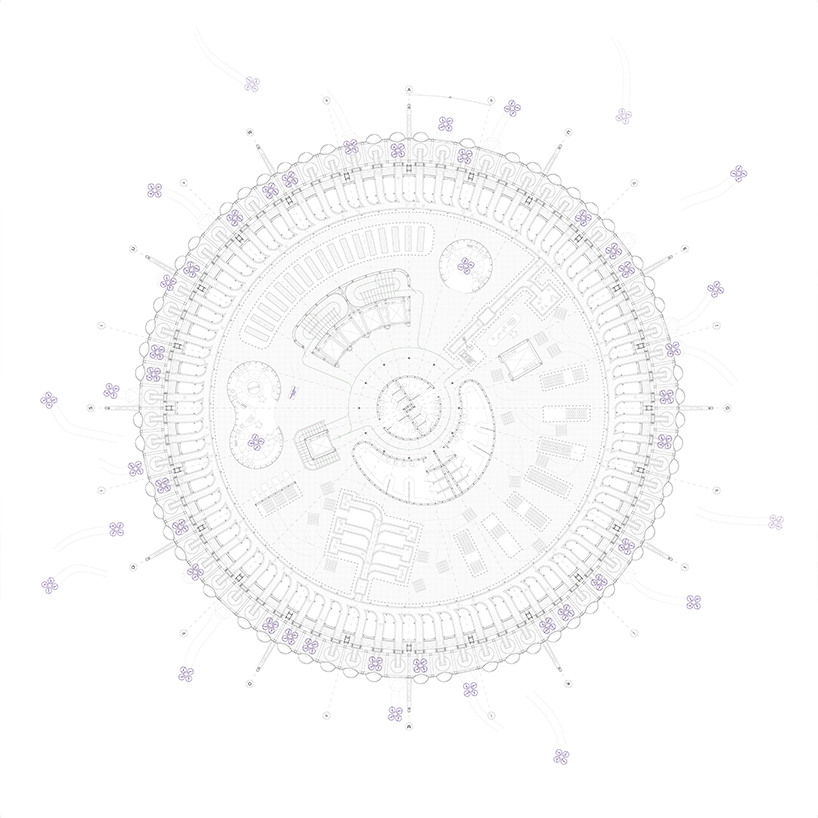 the design extends to include a futuristic series of post-boxes 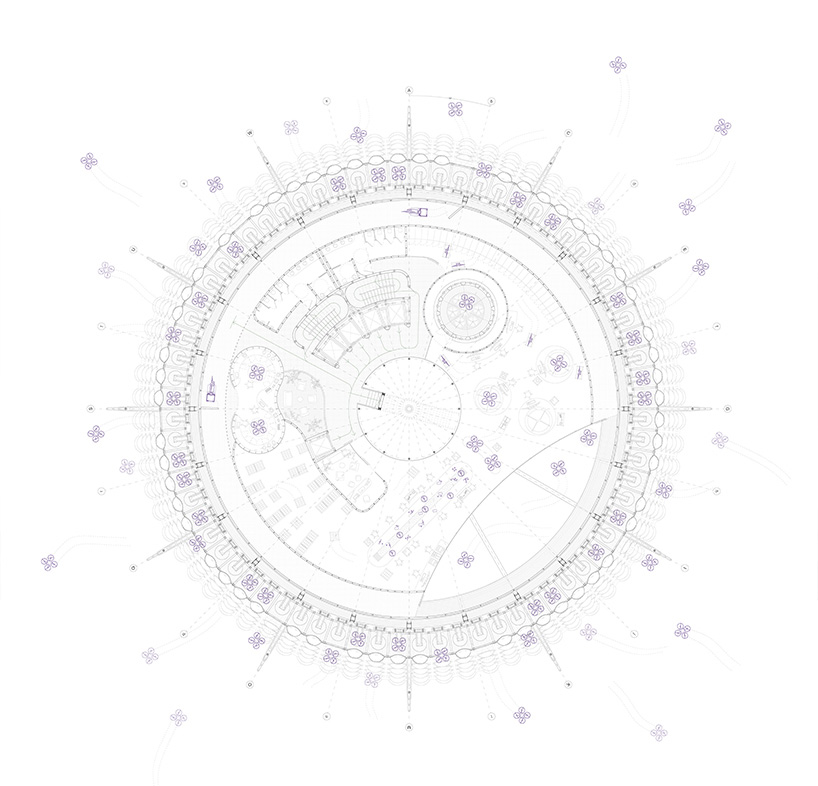 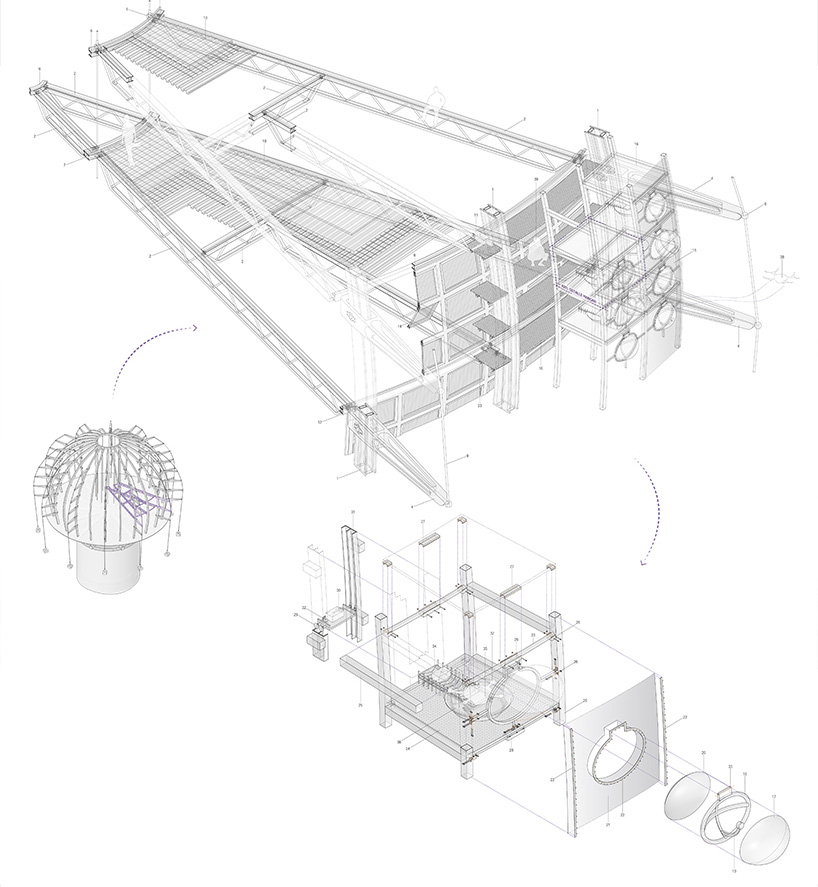 hangar doors will be equipped with solar panels, providing much of the building’s power 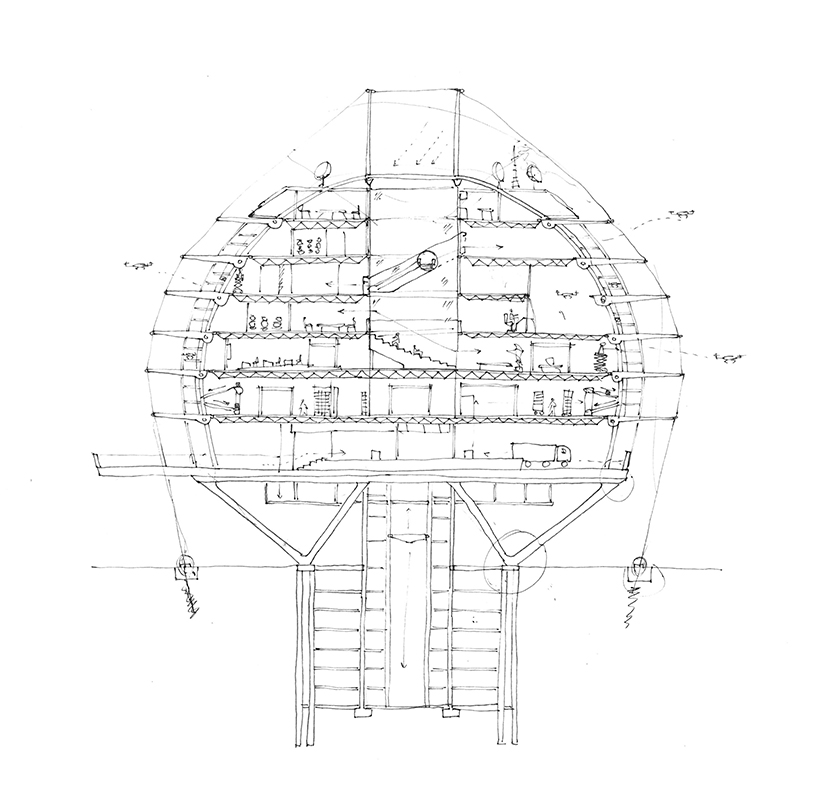 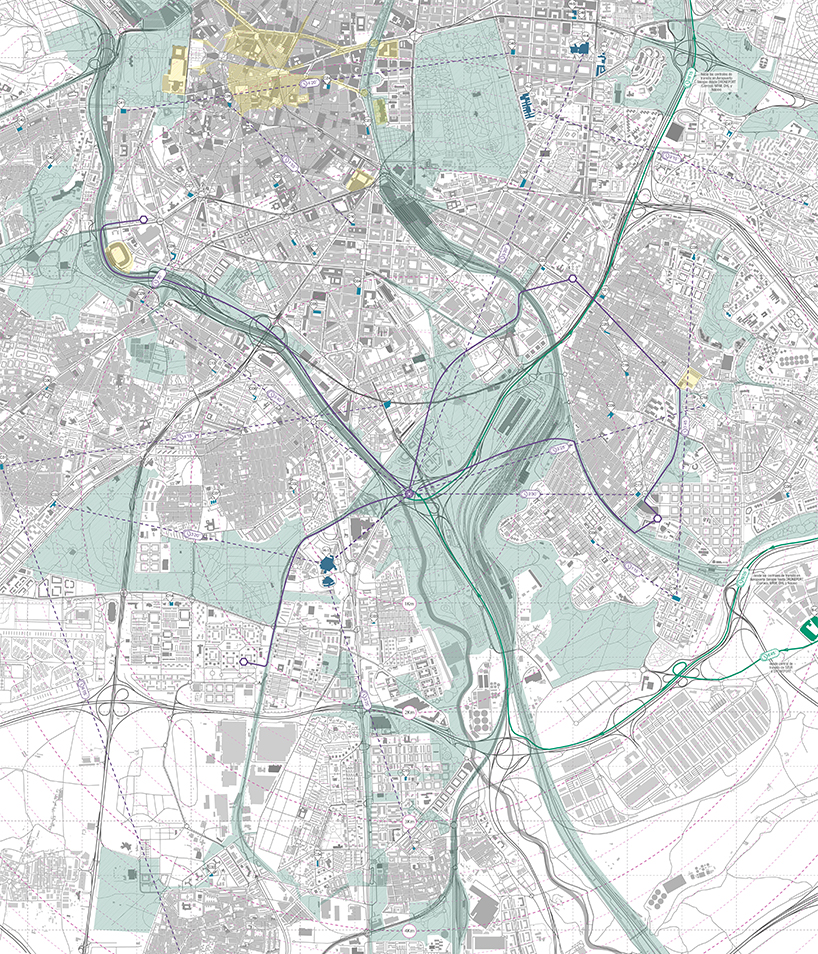 a map of the droneport’s location, relevant infrastructure, and proximity to madrid