read more about the 6 themes here

this year also witnesses the 30th anniversary of shenzhen special economic zone. to summarize the experience and lessons learned by this young city and sort all kinds of urban problems it faces by looking back its historical development is one part of urban problems to be dealt with and studied through the biennale. in this sense, the 2009 biennale this year bears special significance and purpose to shenzhen. the theme of this biennale is city mobilization, which deepens the themes of the two previous biennales. in succession to the theme ‘city: open door’ put forward by yung ho chang and the theme ‘city of expiration and regeneration’ put forward by qingyun ma, this year’s curator ou ning, has brought forward the theme ‘city mobilization’. from the standpoint of urban sociology, this theme tries to penetrate into the internal structure of the city, the mechanisms of urban behavior, and the motivation factor of urban energy. 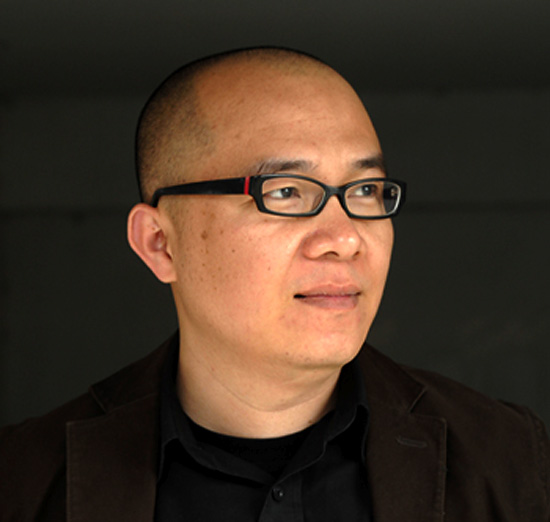 ‘the biennale phenomenon is originated in venice a hundred years ago. an evolution of the world expositions popular in the 19th century, it is a form closely associated with the rise of the nation-states and their need to claim sovereignty. the venice biennale — a living fossil of the history of the biennale system — maintained the tradition of organizing content according to nationality, a feature which has resulted in the establishment of “national pavilions”. in the past hundred years, radical changes within human history and society have helped to propagate biennales; and as it stands now, there are more than three hundred of them taking place all over the world. it is worth noting, however, that with the end of the coldwar era and the integration of the global economy, the concept of ‘nationstate’ has itself been taking a less significant role.’ city mobilization: towards another kind of biennale text by ou ning, chief curator of 09 SZHKB

a biennale should not simply be an exhibition for the high and mighty, nor should it be only an incubator of new economic achievements. as a young biennale with only two previous installments (in 2005 and 2007, respectively), SZHKB has invented an innovative, dual-city mode of operation which may be summarized as two cities, one biennale. to focus not only on architecture but also urbanism means to have a very open vision and the inhabitants and users of the city, the residents themselves, are able to have their voices heard. the SZHKB engages them, either as participant or audience. 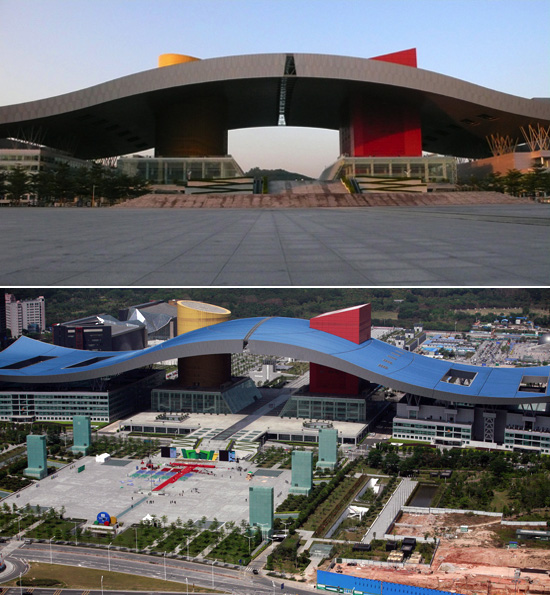 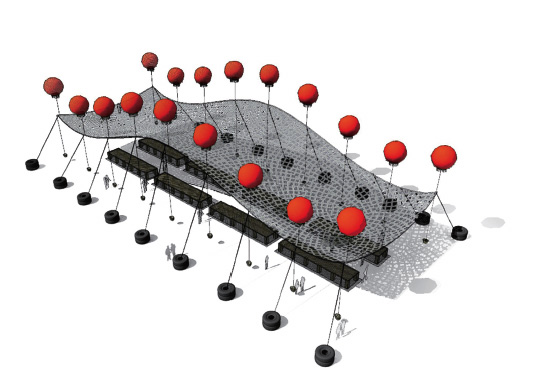 balloons and other local materials support a sunshade net that resembles the rooftop of the shenzhen civic center. this lightly humorous pavilion celebrates and glorifies, while its fluid ability to move with the wind provides a gathering space defined by natural elements. 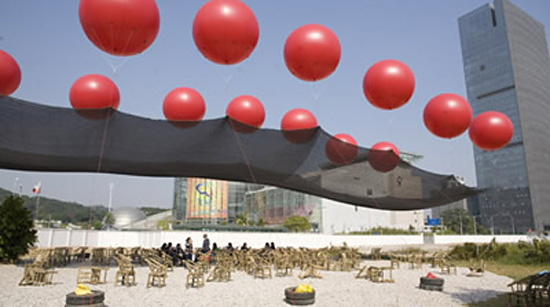