japanese architect shigeru ban’s plans for a temporary auditorium to be built in aquila, italy, will soon be reality. this final decision ends the controversy of recent months. a few weeks after the earthquake the japanese government invited  shigeru ban to create a temporary auditorium for music in aquila. the project was donated by the japanese architect, who also personally committed to gathering funds for the implementation for half and from the japanese government as a contribution to the state of italy for its post-earthquake reconstruction. 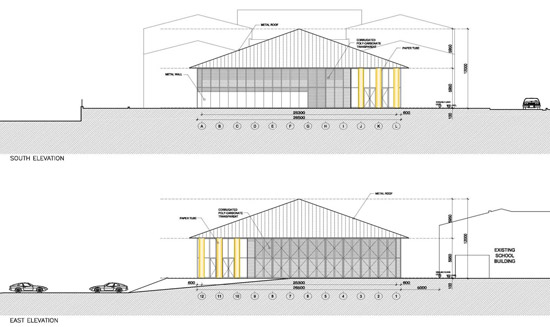 shigeru ban presented as early as june 2009 a first draft for a two-storey complex, to house a conservatory with adjoining auditorium. the building would have occupied a total of 3800 square meters, with classrooms from 20 to 40 seats and an auditorium for 600 people. it would have made use of an existing structure in steel, which has never been completed. even if some local manufacturers had already stated their willingness to work at no labor cost to participate in that humanitarian non-profit project, the italian government decided to divide the project in two parts. italy’s civil defence would carry out the original implementation of the conservatory (a project which is very different from the one proposed by shigeru ban), while the auditorium was put on hold. shigeru ban subsequently returned to l’aquila with a new project. this time he presented a different project for the auditorium, a temporary solution which has been approved in late january 2010. the project was unveiled on march 16, at a lecture at the university of l’aquila. 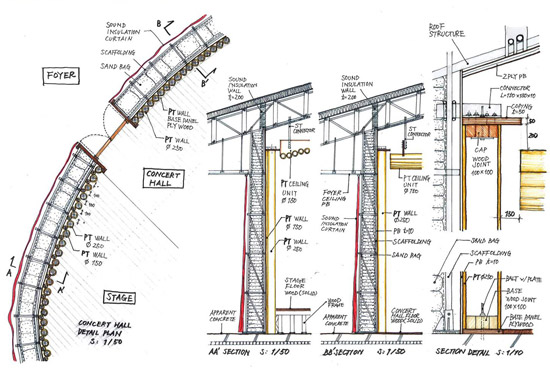 the new project plan presents a square geometry with side length of 25 meters. an ellipse, placed diagonally, houses the main hall for 230 seats. coverage will be made of a lowered pyramid.

for this project ban imagined pressed cardboard tube pillars, sandbags fill the metal shelves to create an ideal acoustic space. after use, all structures will be removed and replaced elsewhere. 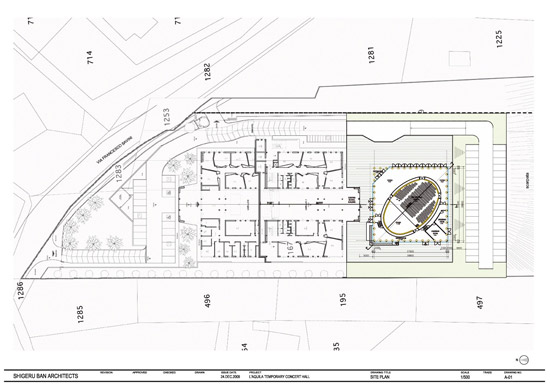 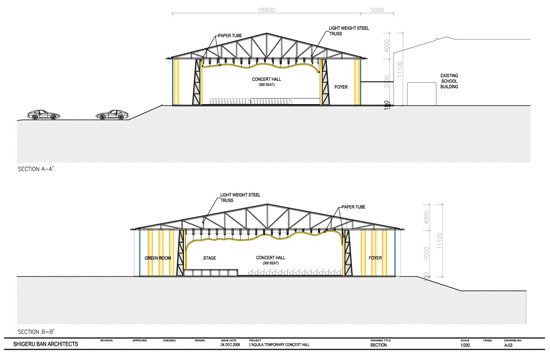 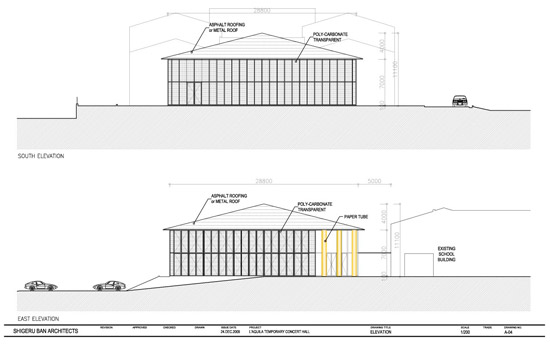 shigeru ban is known for his excellent projects experimenting with the use of cheap and recyclable materials such as cardboard or the bamboo in response to emergencies arising from natural disasters. through these cost-effective projects, ban was able to built dozens of projects around the world and in very poor areas affected by catastrophic events. he often collaborated with a network of volunteers and emergency architects moved by the spirit of solidarity (mainly with members of the VAN, the voluntary architects’ network, which he founded in 1995).