british architect simon allford, co-founder and director of allford hall monaghan morris, and chair of the board of trustees of the architecture foundation, invited designboom to the opening of his world-renowned exhibition, architecture and the art of the extra ordinary held at the british school at rome.

the exhibition explores the idea of the essential architecture of the universal building and focuses principally on how this approach is manifested in six projects in the very diverse physical, political, cultural and incidental contexts of london, amsterdam, the united states and india. 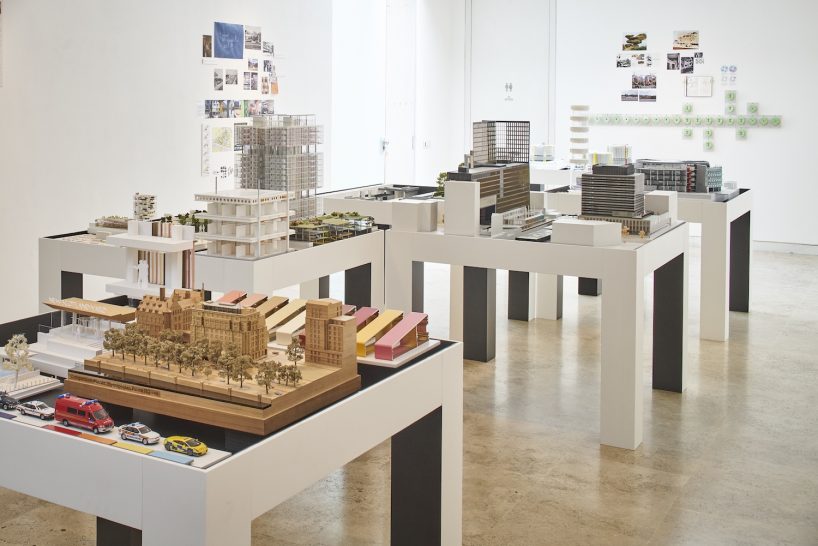 allford’s new scotland yard project is a radical remodeling and extension of the curtis green building, a 1930’s building on the thames embankment, which was an earlier home of the MPS. the core objectives of the brief were to create contemporary, flexible and efficient office environments, extend available floor space and facilitate agile working with more interaction between staff. the design has transformed the building with the addition of an elegant curved glass entrance pavilion and rooftop pavilions and a reworking of the existing accommodation. 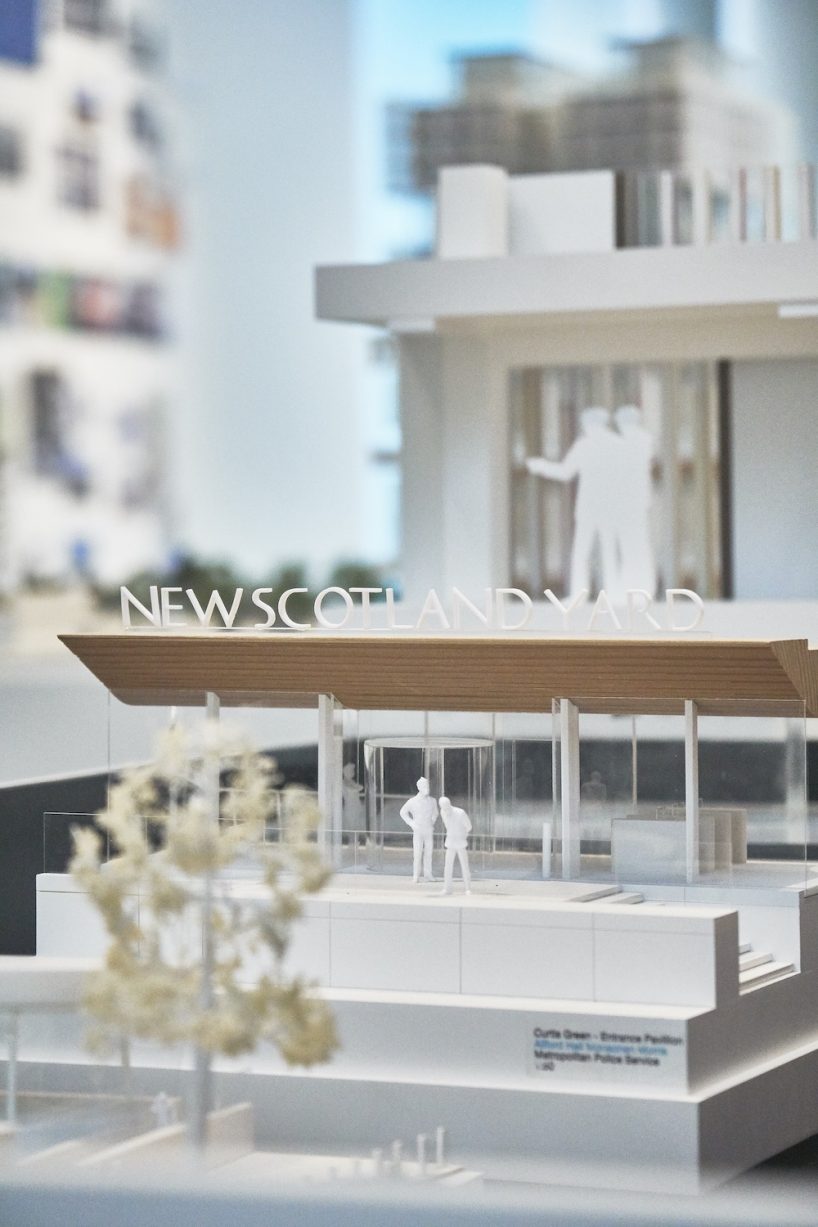 the AEP fitness center extends an unused basement structure in northern oklahoma city into a sports and leisure hub. a series of arched steel trusses are placed over an existing concrete basement. the trusses are clad with industrial-scaled profile metal sheeting to enclose a singular hangar-like volume with fully-glazed gables. two boxes are then inserted; a single storey steel-clad volume punches through the front gable to provide an entry vestibule to the east, while a larger cube is placed within the central space containing two racquetball courts within and an adaptable climbing wall on its western face. 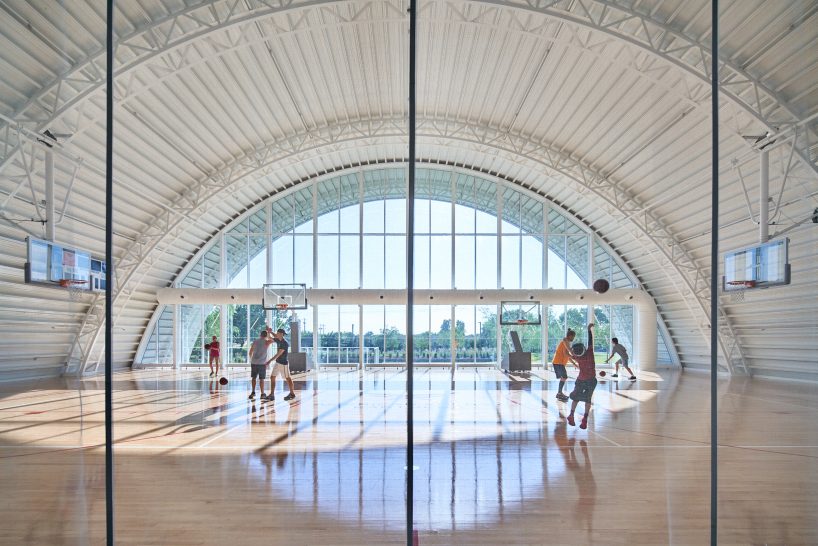 the university of amsterdam explores large-scale reinvention. two utilitarian buildings from a previous era – part of an incomplete masterplan by norbert gawronski – are stripped out, sliced open, reconfigured and then knitted back into the city’s fabric to regenerate a post-war university campus in the heart of the dutch capital. a forty-metre section of low-hung, canal-spanning building is cut out and replaced with a four-storey void. physically and visually opening up the campus behind and the zoo beyond, the void is bridged by a glazed double-height space and five storeys of workstations, all with new views across the city. 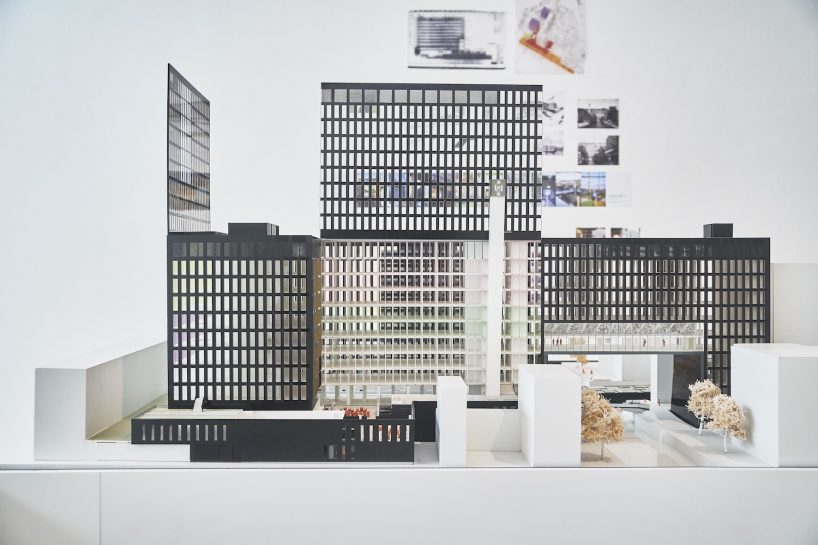 Sep 25, 2020
interview: KPF's james von klemperer on the design of new york's 'one vanderbilt'
von klemperer discusses the challenges of completing the supertall skyscraper and how the materiality was informed by its neighboring buildings.
architecture
182 shares
connections: +1590

Sep 25, 2020
avignon-clouet architects builds summer house with removable roof in france
the roof overhang seems like it defies the laws of gravity, and acts as a cap extending the living space.
architecture
374 shares
readers

Sep 24, 2020
bangkok project studio builds 'elephant museum' in thailand out of handmade bricks
the flexible museum is a network of covered and open-air spaces that allow for a variety of programming.
architecture
776 shares
connections: +1290