the U.S. general services administration (GSA) announced that it has approved the design concept by skidmore, owings & merrill / SOM for a new federal courthouse in fort lauderdale, florida. the building will rise ten stories on the southern bank of the tarpon river in the heart of fort lauderdale, while offering significant new green spaces for city residents — including a riverfront trail that retains existing mangroves on the site.

SOM’s design for the 252,000-square-foot building combines principles of classical architecture with state-of-the-art technology and sustainable design. the building is targeting both LEED gold and sites silver certification, and, with advanced building systems and climate-appropriate design, it is projected to achieve a 30% reduction in energy use over baseline levels. 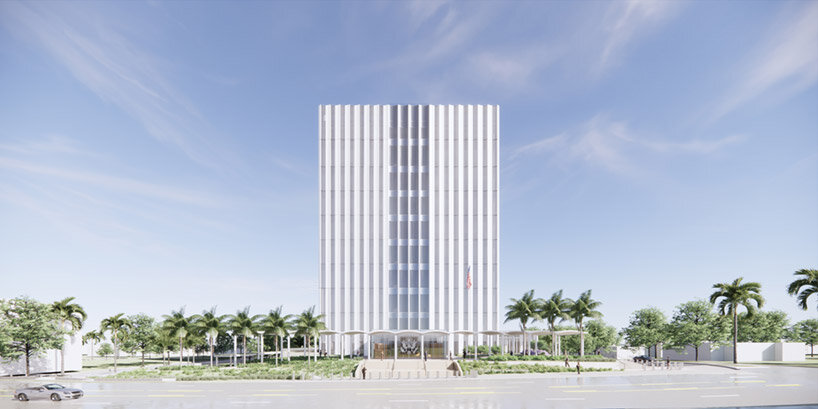 the federal courthouse by SOM

skidmore, owings & merrill / SOM (see more here) fort lauderdale federal courthouse which is scheduled for completion in 2026, will house the operations of the U.S. district court for the southern district of florida. it includes twelve courtrooms, seventeen judges’ chambers, as well as workspace for other federal agencies including the U.S. court of appeals, the U.S. bankruptcy court, the U.S. marshals service, the U.S. attorney’s office, the U.S. probation office, and the U.S. trustee.

SOM partner paul danna tells designboom: ‘the fort lauderdale federal courthouse embodies the ideals of dignity, transparency, and clarity. our design emerged from deep study of the needs of all participants in justice proceedings, as well as a desire to create a building that symbolizes fort lauderdale’s culture and becomes an integral part of the city’s urban fabric.’

SOM principal joseph ruocco continues: ‘we wanted to create a building that opens outward to the city. to that end, we composed the courthouse as a symmetrical tower rising above a one-story podium, which lends the building an approachable feel and enables us to add new green spaces throughout the site.’ 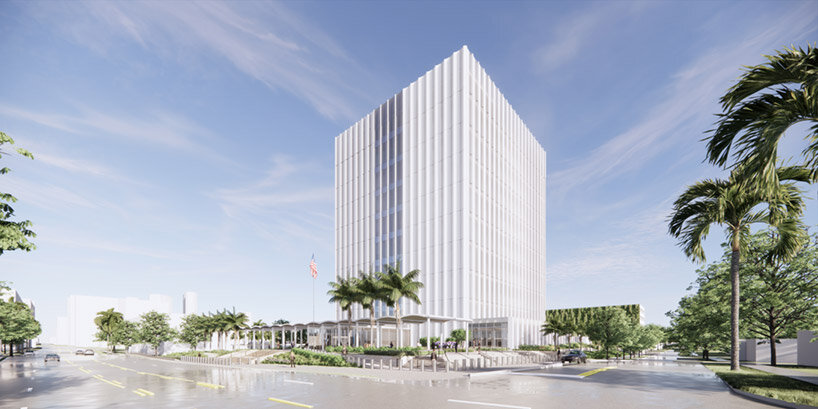 celebrating the climate of fort lauderdale

the exterior of SOM’s fort lauderdale courthouse takes shape with fluted panels of metal and glass. this facade marks a contemporary interpretation of corinthian columns and modulates the bright tropical sunlight. within the courtrooms on the building’s upper floors, a unique system of light reflection and diffusion will bring in natural light while preventing glare and protecting user privacy. combined with the use of natural materials including oak and local coral stone, this lighting system brings a sense of comfort, brightness, and warmth to these important institutional spaces.

the design for the new courthouse incorporates a variety of forward-looking sustainability features. among these are displacement ventilation in the courtrooms, as well as infrastructure to accommodate the addition of a photovoltaic solar array on the building roof. 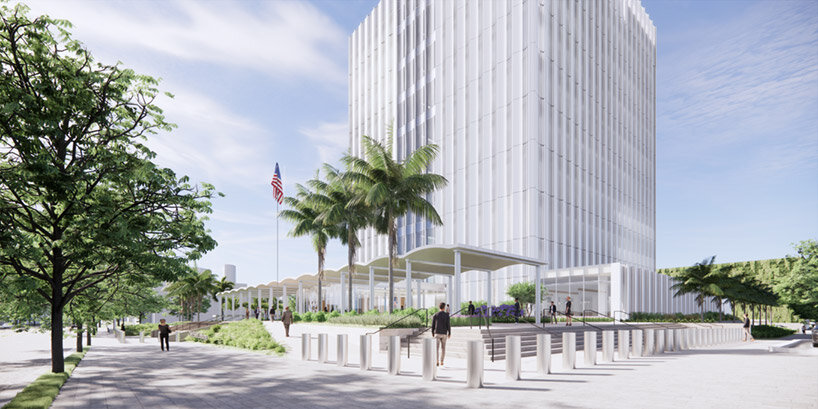