following an international architecture competition, snøhetta has been selected to complete cheongju’s new city hall in south korea. located 128 kilometers (80 miles) away from seoul, cheongju is the capital and largest city of the country’s north chungcheong province. ‘while providing a platform for effective governmental administration, the cheongju new city hall will serve as a symbol of integration and accommodate for collaboration and social interaction,’ say the architects. 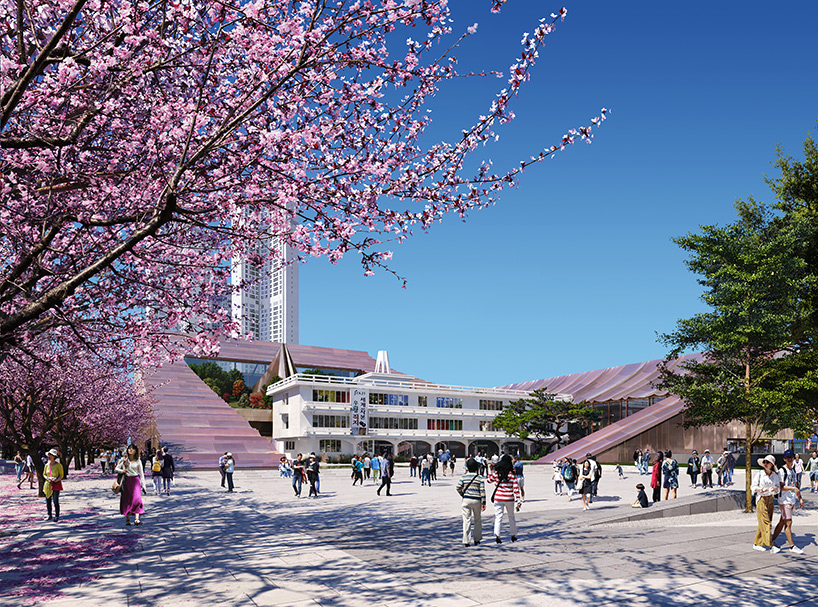 all images © snøhetta and plomp

snøhetta, working alongside local partner tomoon architects & engineers, designed the project to integrate with the site’s existing urban context, while promoting ownership for the citizens of cheongju. the landmark scheme unites the city’s currently scattered governmental offices into one space with administrative areas consolidated beneath a single roof. the new city hall will provide high quality working facilities that promote collaboration, innovation, efficiency, and physical and mental well-being. 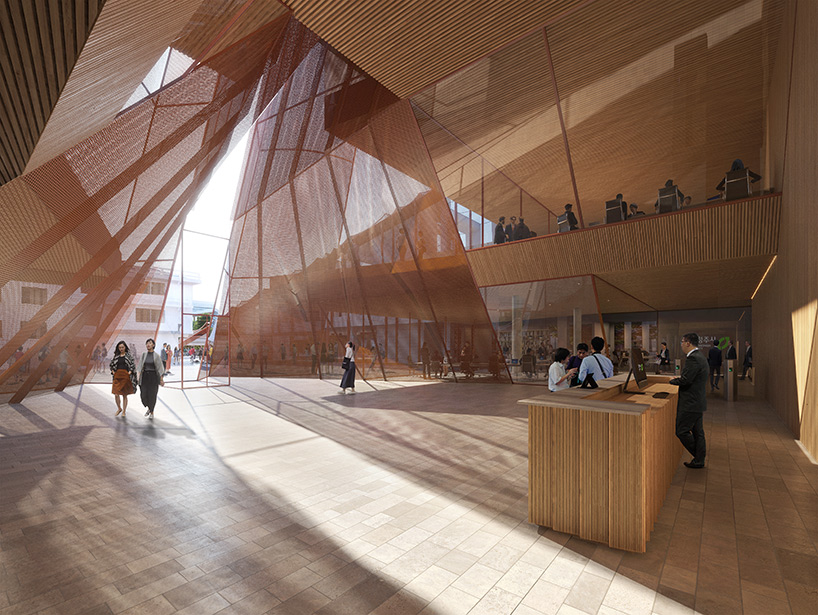 the building forms an open frame around the former city hall, which will serve as the entrance portal to the new development. the site’s public spaces and amenities have been designed to be accessible for all — allowing the city to gather for daily activities as well as special events. by creating space for collective living and learning, the public will have access to cultural spaces — such as exhibition areas, a library, and an auditorium — and amenities including restaurants, cafés, childcare facilities, and a post office. 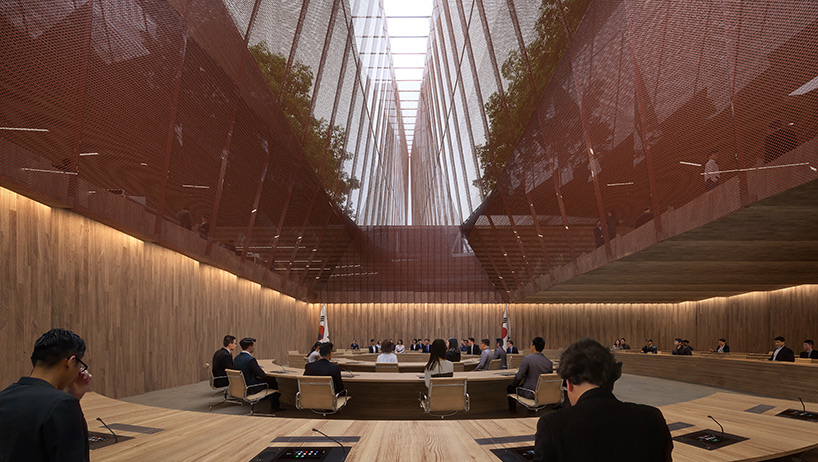 the building’s roof and façade are formed by gently folded curves, referencing the shape of traditional korean roofs. opaque façade panels ensure enough shading is provided, while building-integrated photovoltaics (BIPV) on the roof provide a source of electrical power from solar energy. the translucent panels are glass laminated with copper mesh, allowing natural light to enter the building. the sloped roof has integrated drainage to allow water run-off and stormwater collection. the cheongju new city hall is scheduled to complete in 2025. 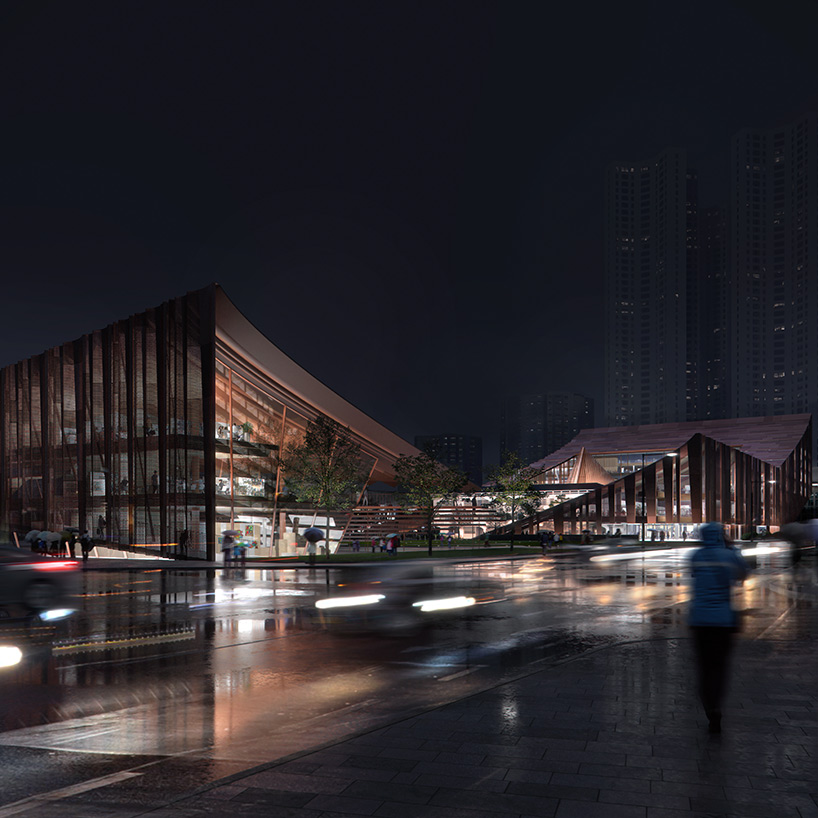 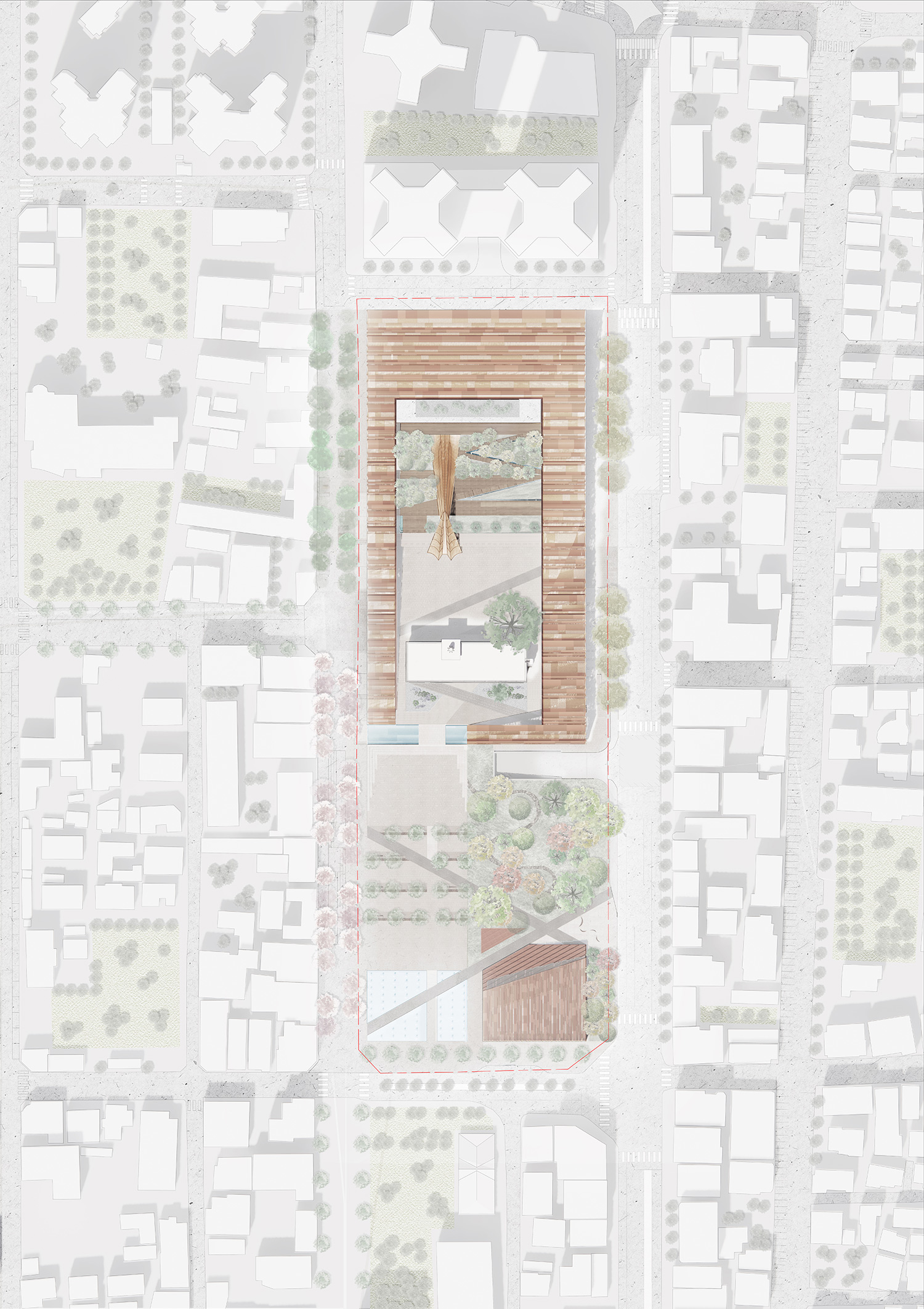 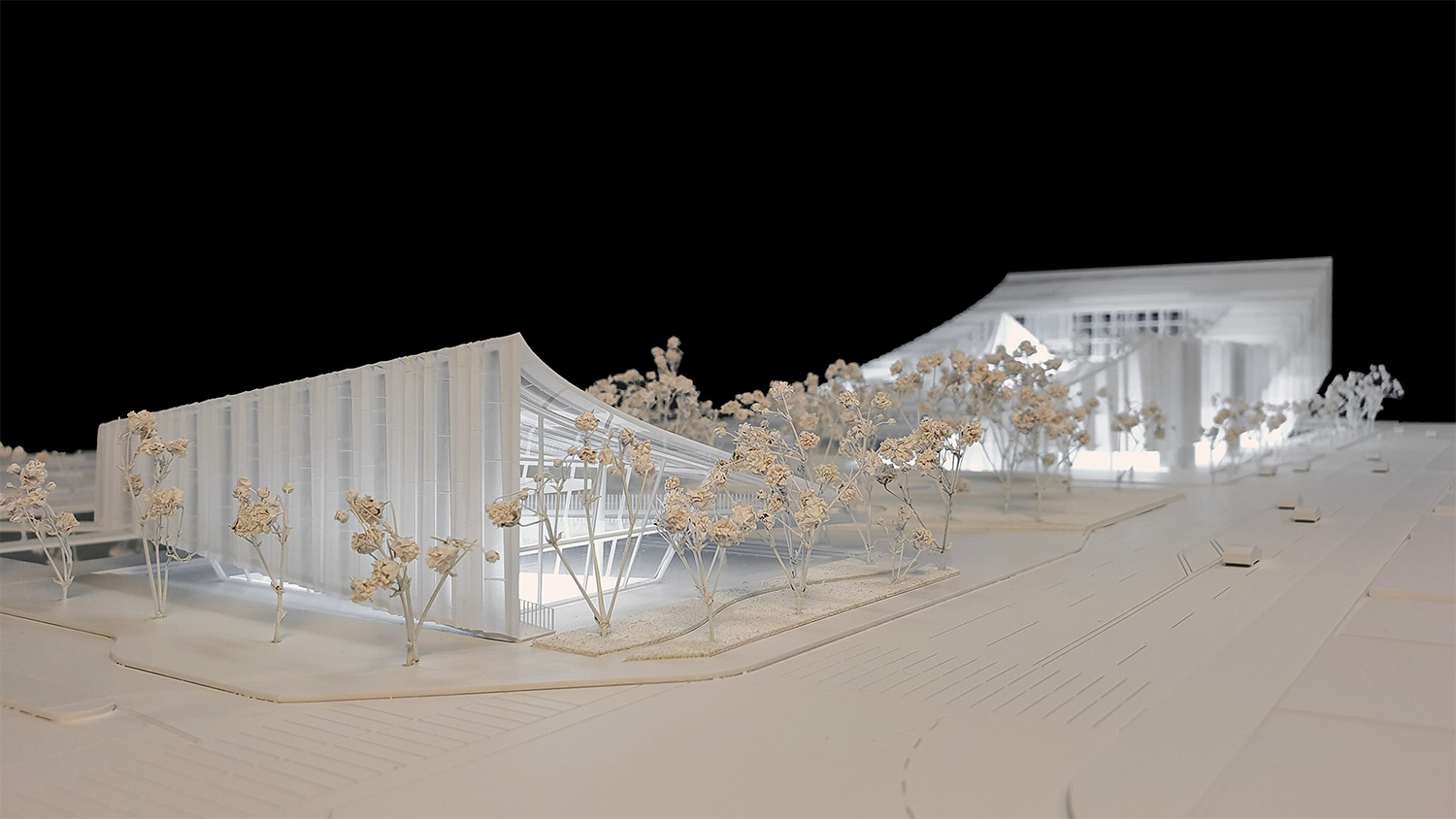 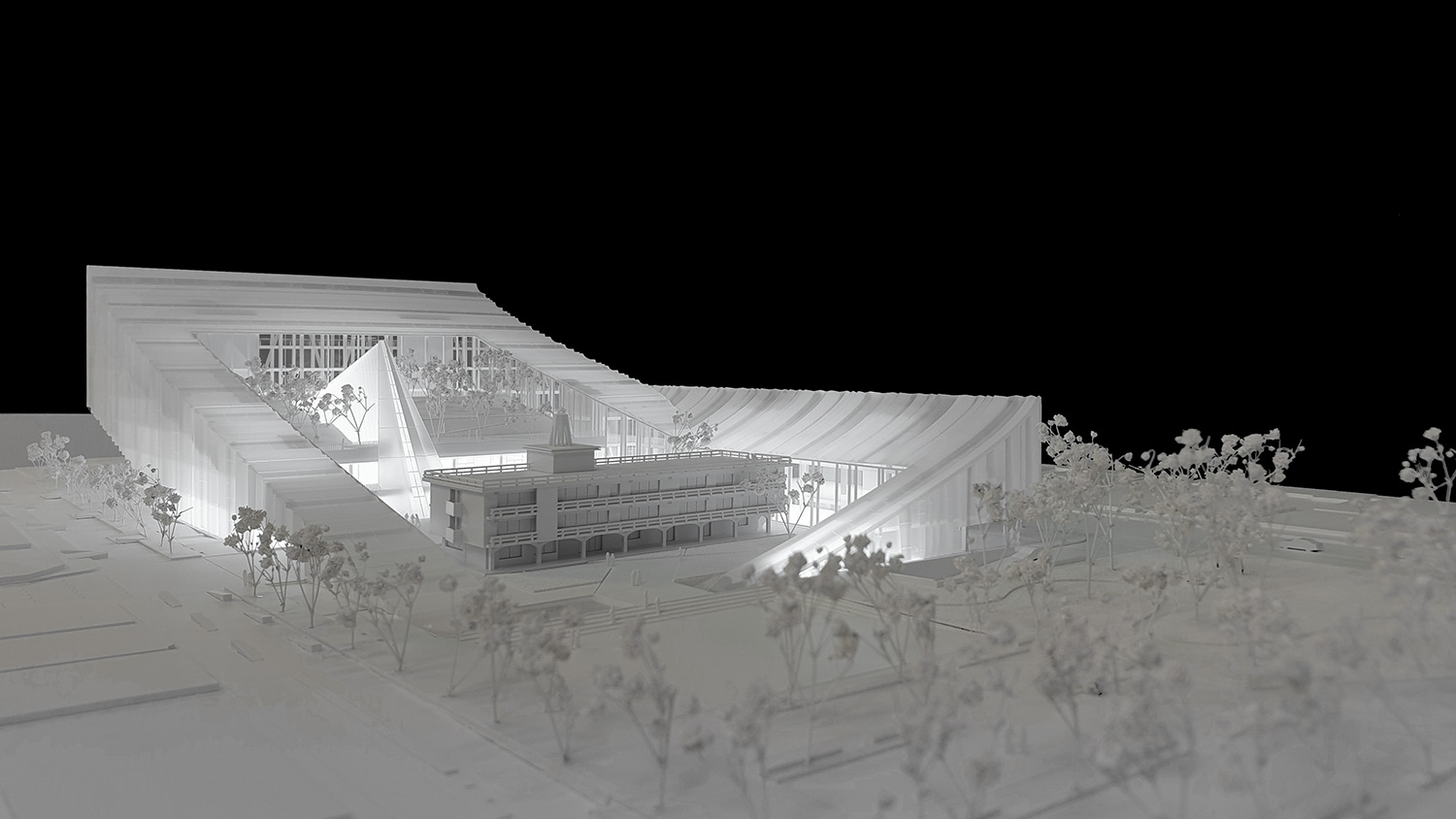 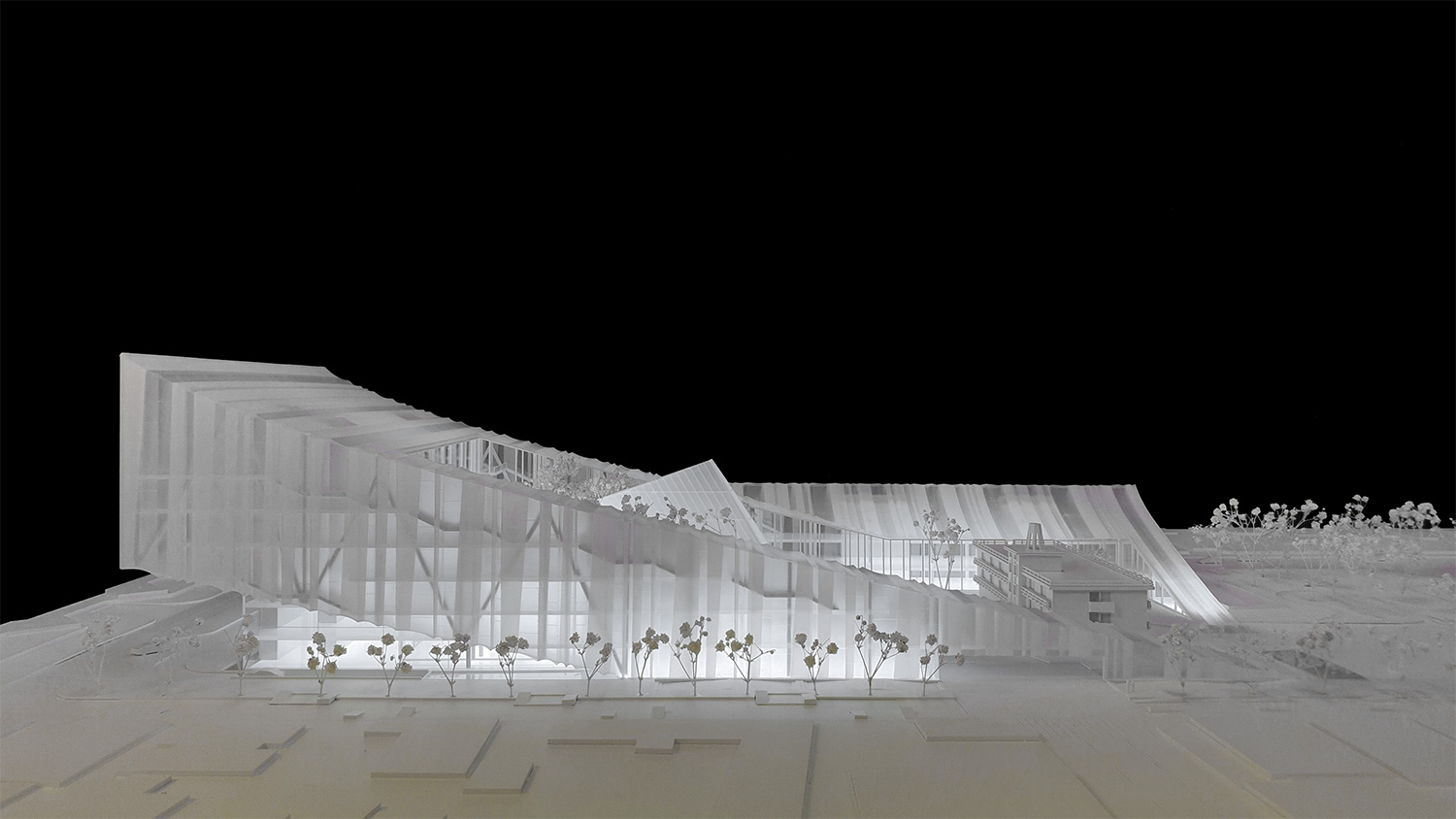 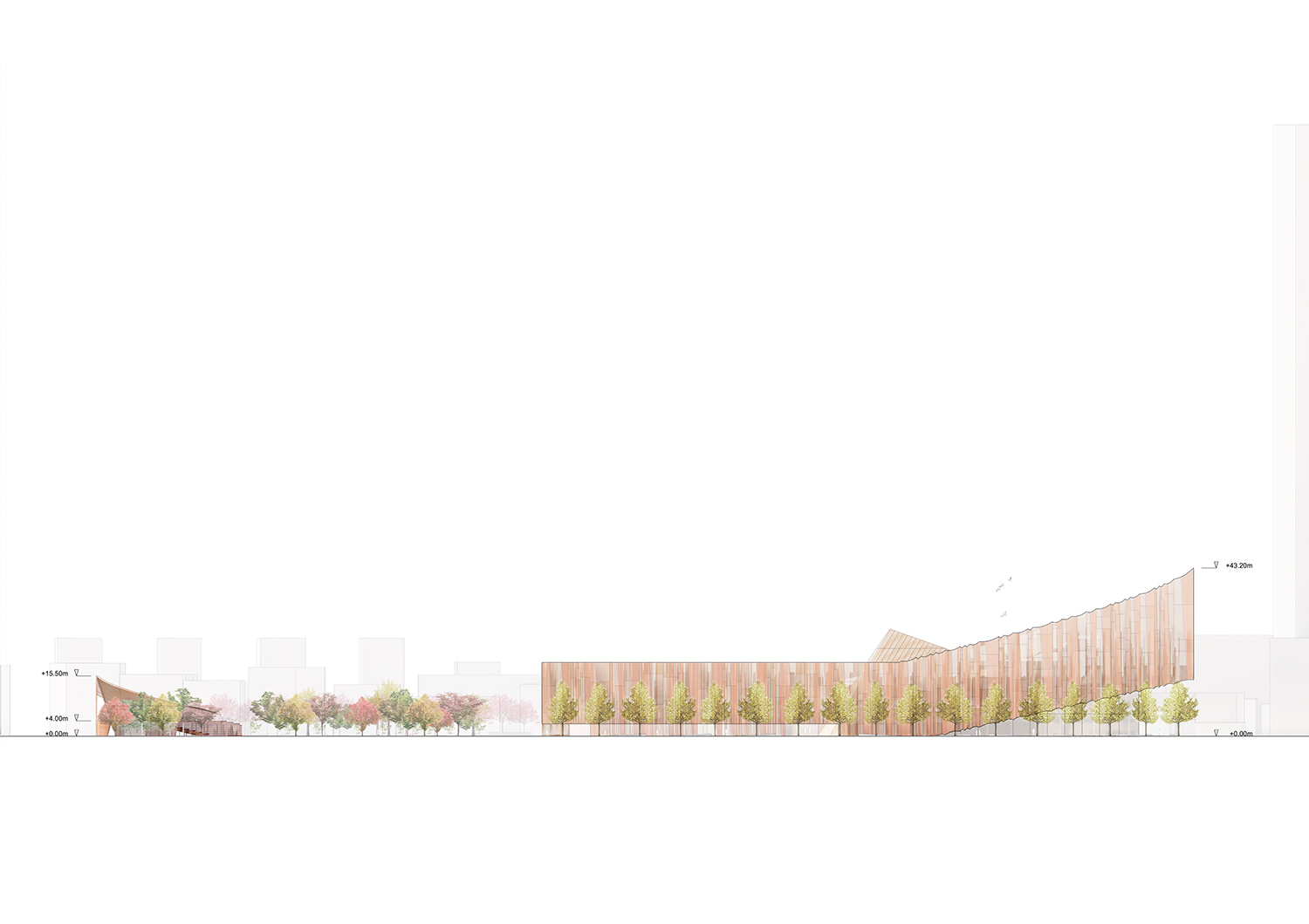 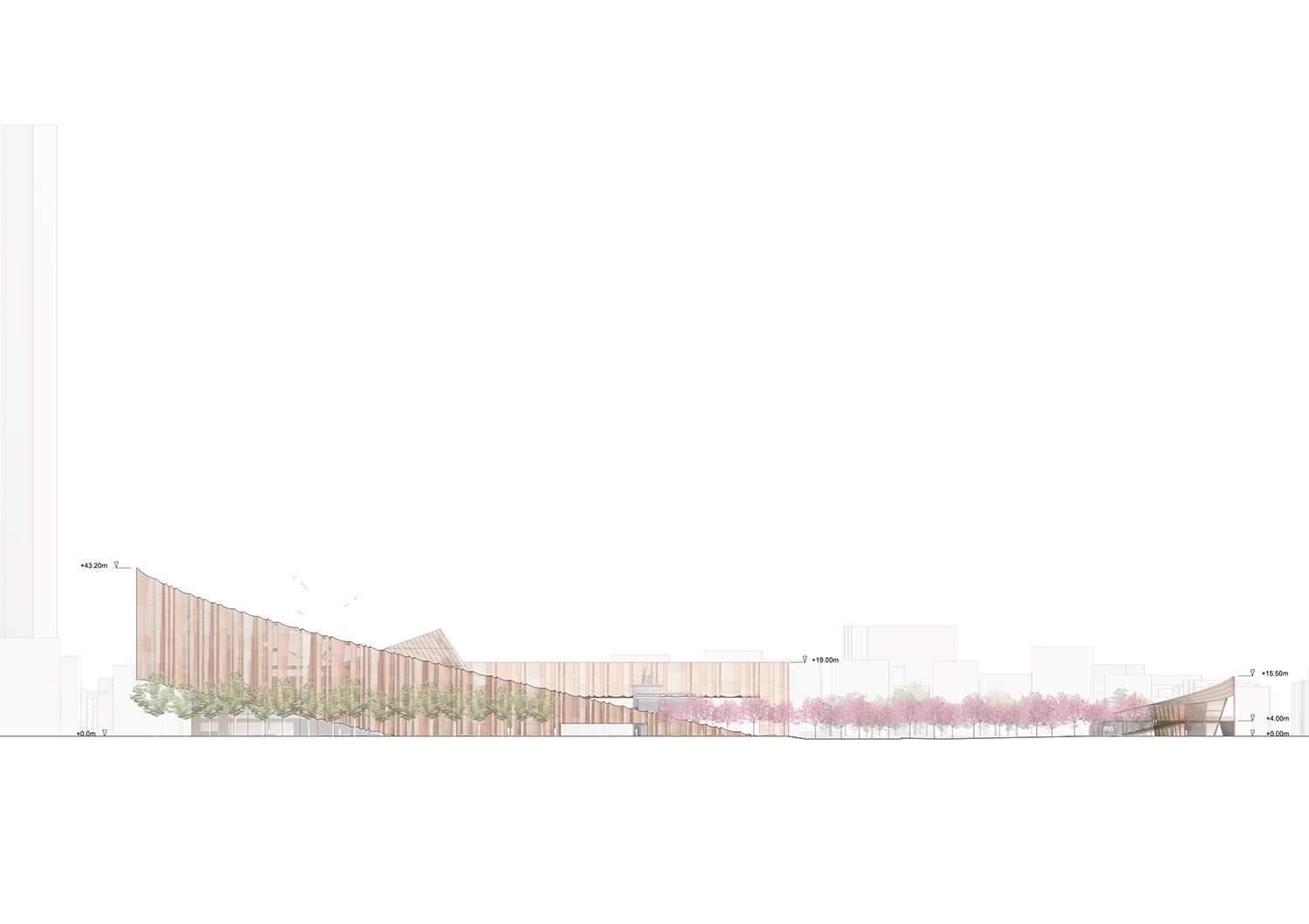 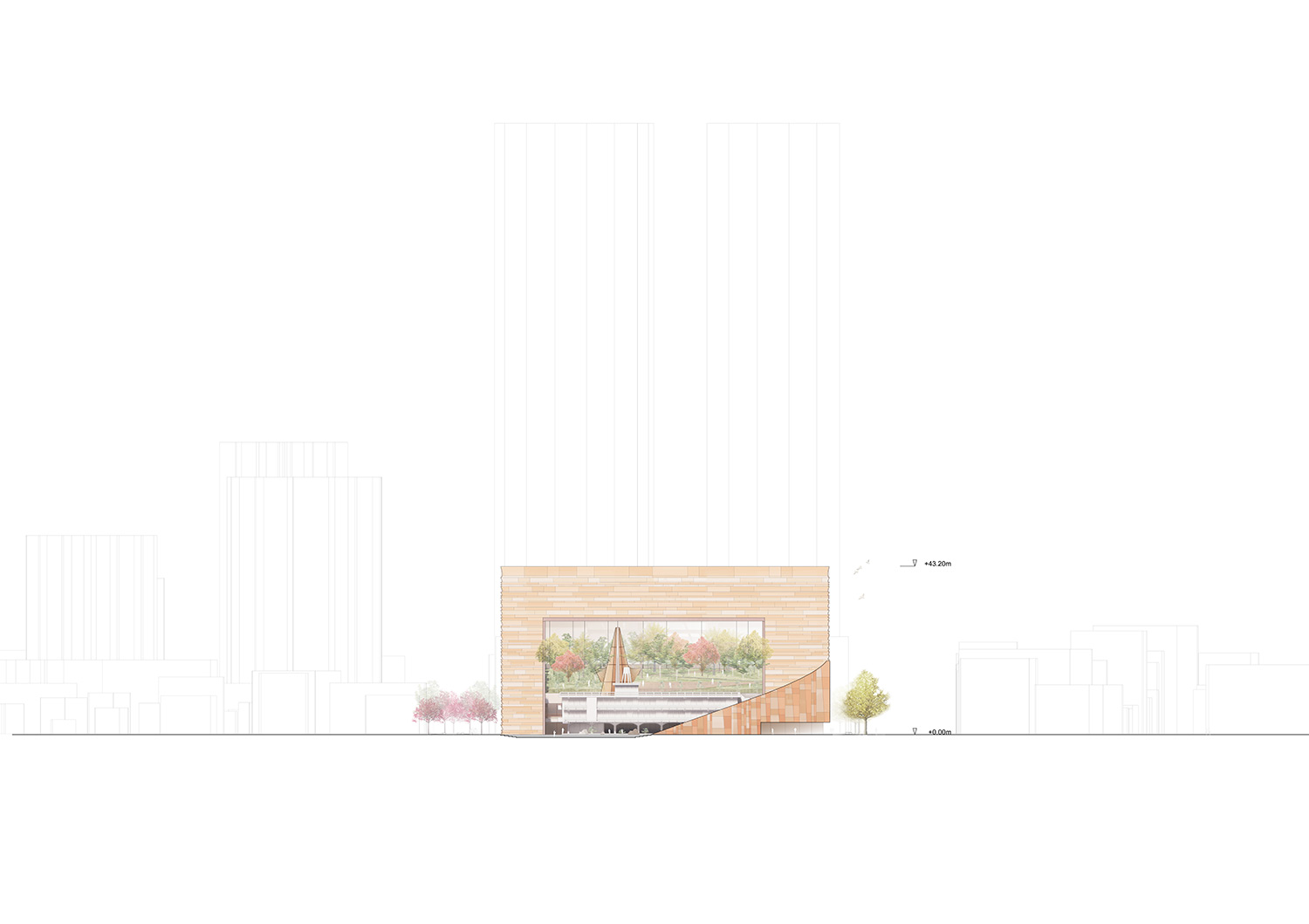 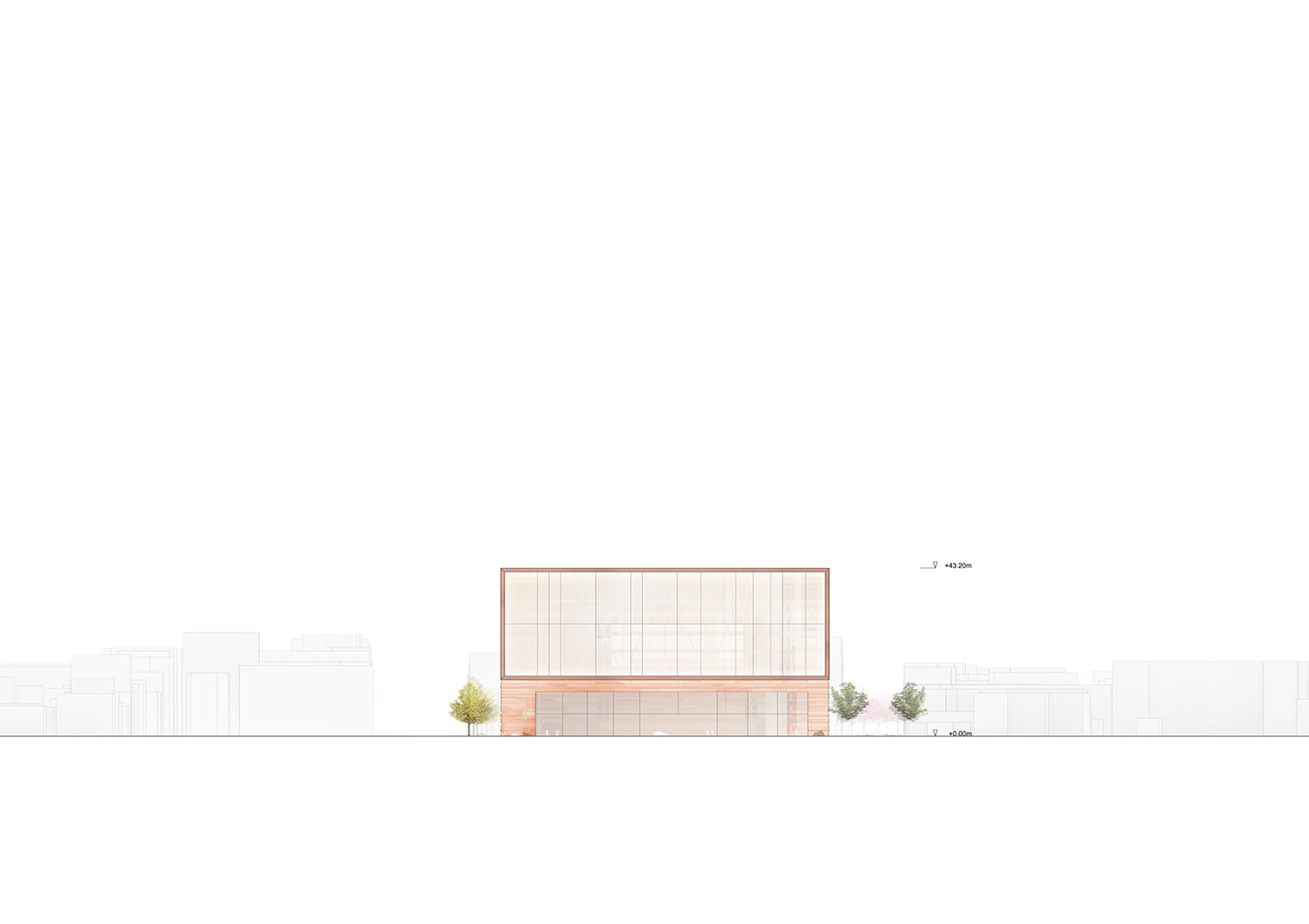 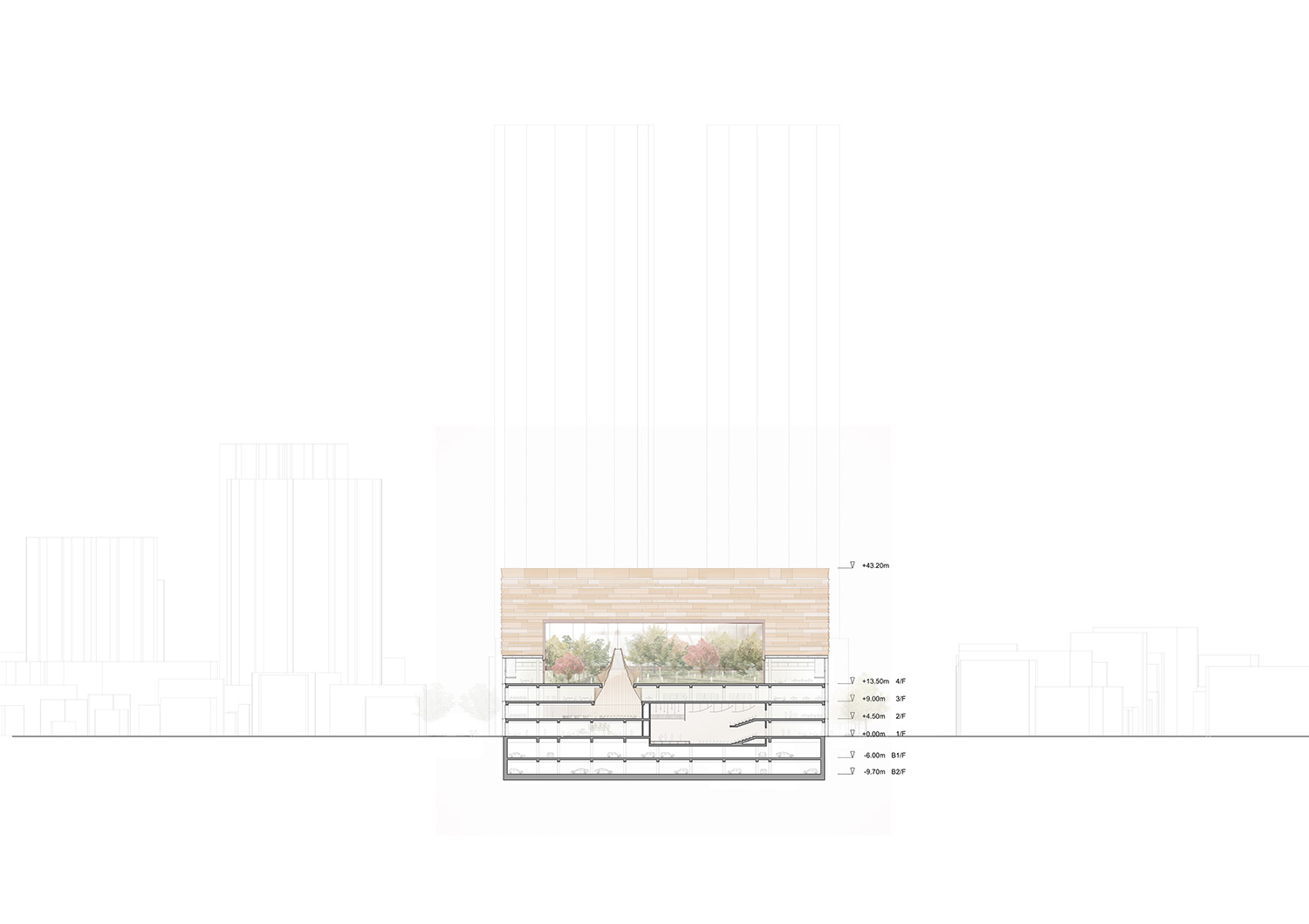