all images courtesy of snohetta arkitektur landskap as

snohetta has designed the ‘qasr al hukum downtown metro station’ as an oasis in riyadh, saudi arabia, embodying the principles of sustainable urbanism.in an attempt to make the public consciousness of the importance of natural resources in its desert environment, the norwegian architecture firmemploys several distinct features which differentiate the metro station from its urban context; a large stainless steel bowl-shaped canopy is the most characteristic of these elements. rising above the plaza it provides shade where there is none, while reflecting and channeling light deep undergroundwith its reflective surface, and an inner fiber-optic light-harvesting system. a central oculus allows light air and water to enter the subterranean spacewhere a garden flourishes in the center of the main circulation atrium. organized for public use, the principal pedestrian circulation space consists ofconcourses and escalators that are efficiently and directly linked from the platforms to the street-level.

above ground the metro station is visually prominent with clearly defined entrances at the central periscopic landmark and a mosque at the southwest corner of the site.

caught in its reflection, citizens are called by the canopy to gather in the plaza, while the muezzin serenades the religious to worship.

linking these elements materially and spatially, palm trees and irrigation channels create a human scale, and provide directionality toward mecca;

limestone walls define the mosque at the edge of the site, and unify it with the surface of ground plane, as the wooden screen-like walls

open the house of worship to the north and east. the harmony of the various programs emphasizes the project’s consciousness of its environment,

sustainably integrating available natural resources, and meeting the social demand for a vibrant space for public gathering, interaction, and worship.

zaha hadid is also involved in the riyadh metro station development, responsible for the design of the king abdullah financial district (KAFD) metro line.see her winning proposal on designboom here. 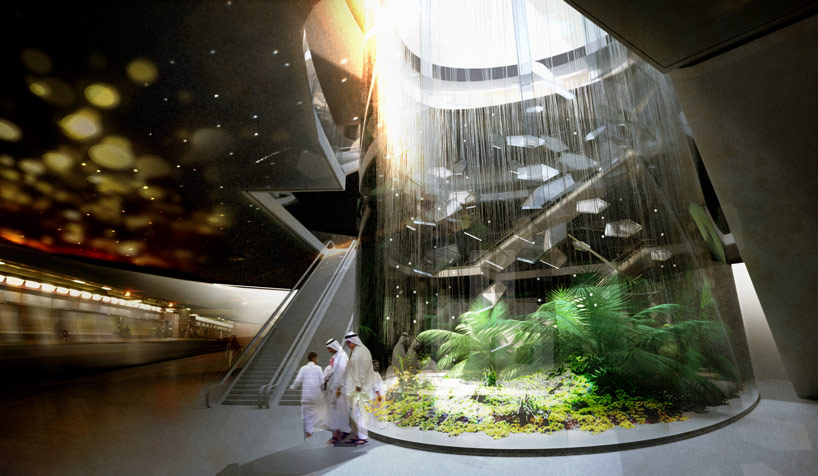