following a lengthy competition process, the design for calgary’s new central library has been unveiled, as conceived by the collaborative team of snøhetta and local practice DIALOG. selected by the calgary municipal land corporation, the scheme delivers on the community’s desires, ‘for a technologically advanced public space for innovation, research, and collaboration.’ located between the city’s downtown area and east village, the project spans over an existing light rail transit line running through the site, resulting in an elevated building volume with wide staircases on either side. 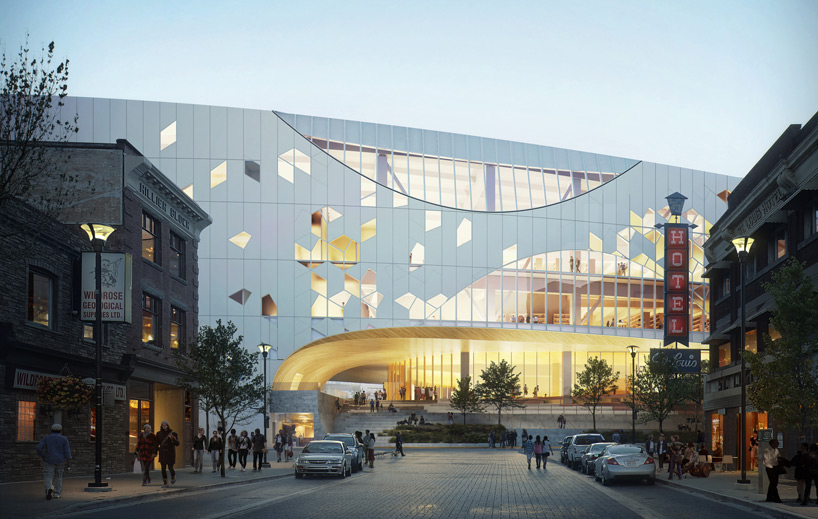 the structure is identified by its visually porous curving façades, which are articulated by a composition of tessellated and arching geometries. the building mass is carved away at the ground level, allowing for an outdoor link between either side of the site as well as a covered and wide entry area. this wood-clad underbelly contrasts the  white panelization on the exterior elevations, and references the ‘chinook’ arch cloud formations common to the alberta province. 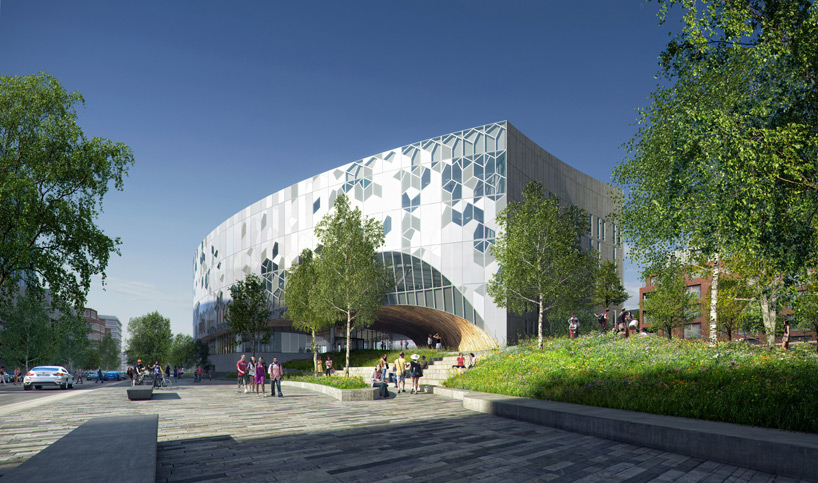 the facility’s layout is arranged around a high and skylit atrium adjacent to the building’s main entry. the program is organized as a vertical spectrum, with more-public functions in taller spaces on the lower levels, while more-private areas are placed on upper floors for quiet and focused reading and research. the building’s  façade is composed of a patchwork of clear, frit, and opaque panels, in relation to daylighting needs of interior spaces.

the calgary new central library is expected to open in 2018, with work having already begun on the structure to span over the existing light rail transit line. 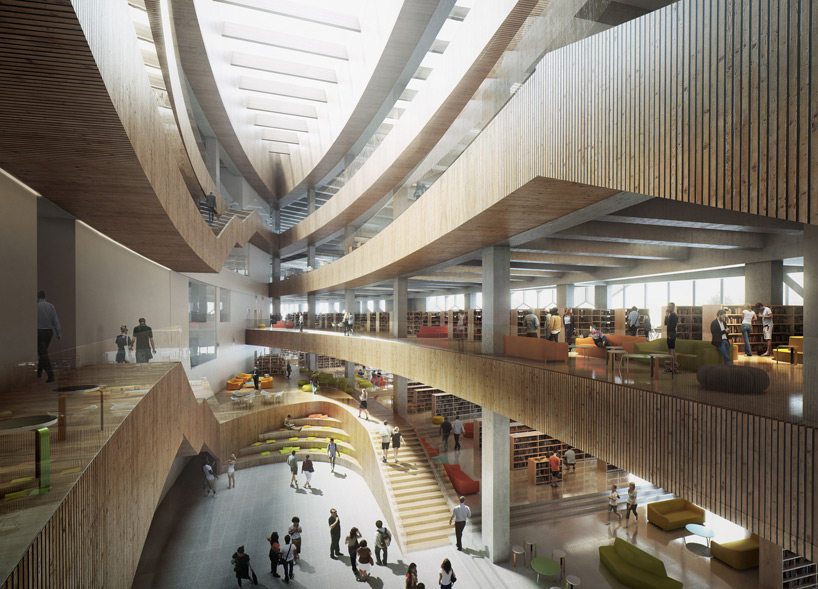 the new library’s development is led by the calgary municipal land corporation. lyle edwards, its chairman, shares his remarks on the finalized design and the project’s intentions:

‘the new central library embodies everything we’ve endeavored to accomplish in our redevelopment of east village. our constant goal has been to connect calgarians and to create a gathering place where guests will find stimulation, inspiration, entertainment and recreation. that’s precisely what we’re delivering through both the new central library and the revitalized neighborhood of east village as a whole.’ 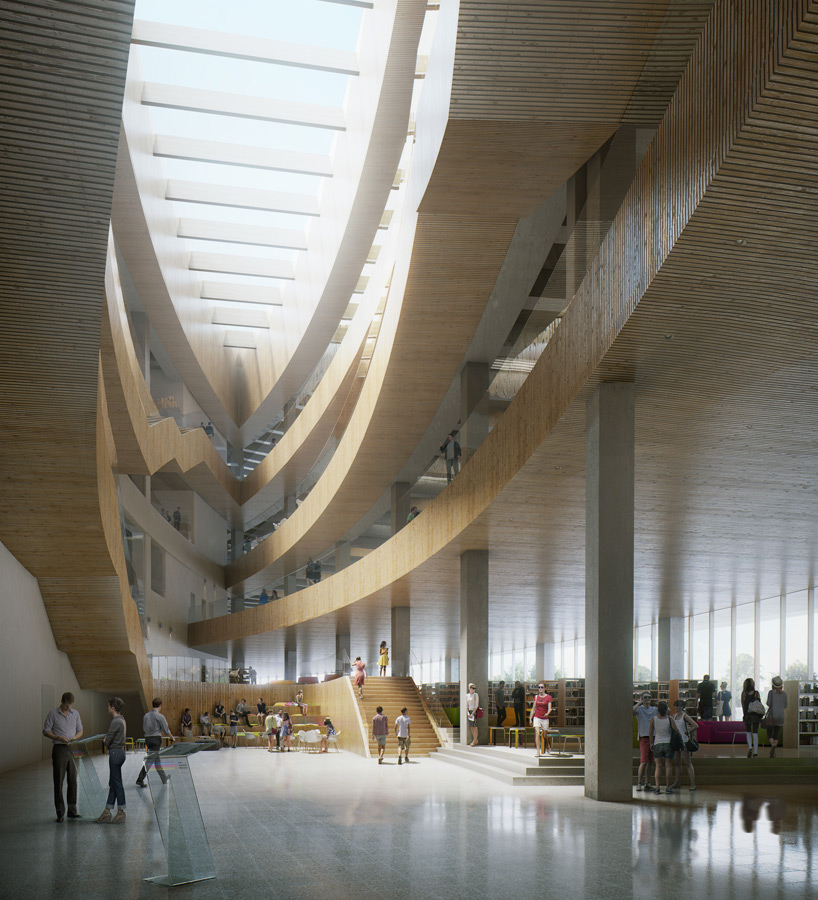 being an internationally operating office, snøhetta has sought to make the design very relevant to the specific context of calgary. founding principal craig dykers states, ‘since embarking on this project, one of the things we’ve kept reminding ourselves is that we don’t just want to build the best library in the world.  we want to build the library that’s best for calgary.’ 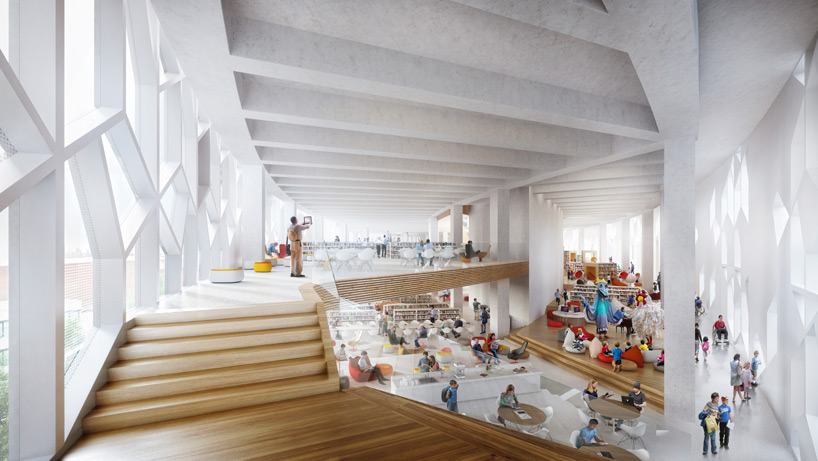 in regards to the building’s impact on the surrounding neighborhood, architect rob adamson of DIALOG expresses, ‘the exterior and street life surrounding the library is just as much a part of the building as the interior. the outdoor plaza welcomes visitors from east village and beyond and invites them into the building to explore, relax, reflect and connect.’ 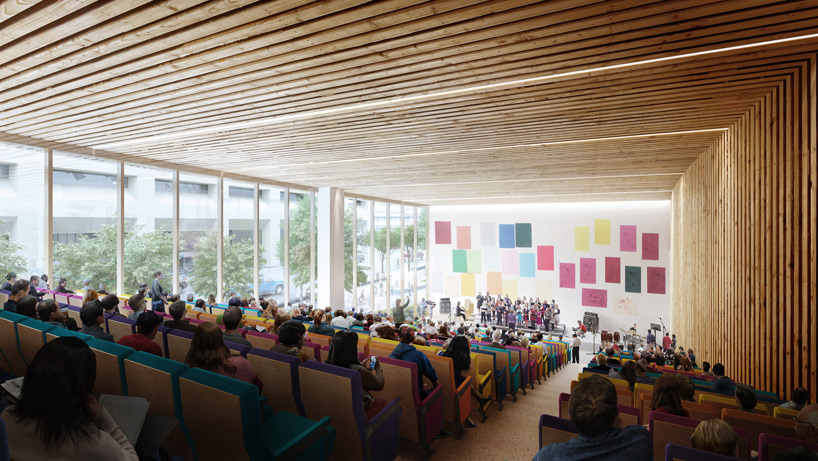 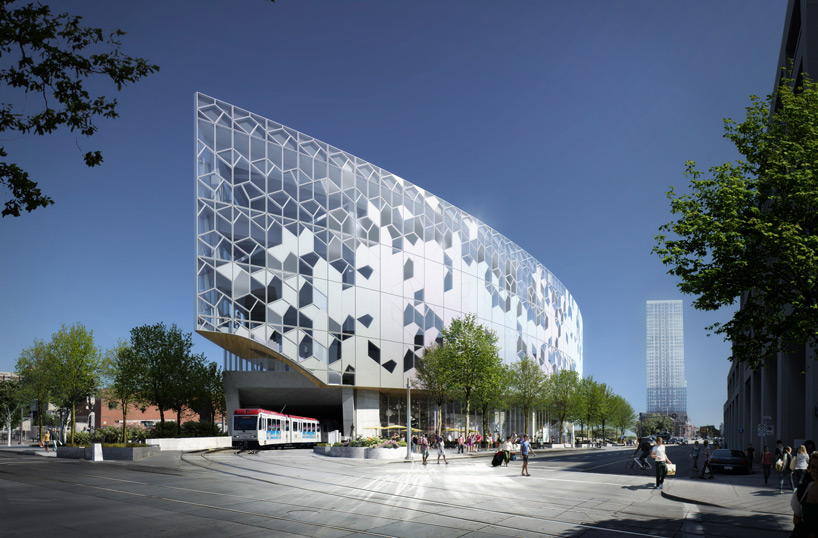