interdisciplinary solid studio has developed the NANONANO science center proposal with two global research topics in mind. first, taking adaptability as a solution to the ‘extinction’ of research facilities. second, merging utility services and bearing systems into one unit. the idea of flexibility in architecture has long intrigued designers. even though the field is considered a static art, many attempts have been made to endow it with changeable features. in other words, there is a desire to create buildings that can stand the profound inner program variations. 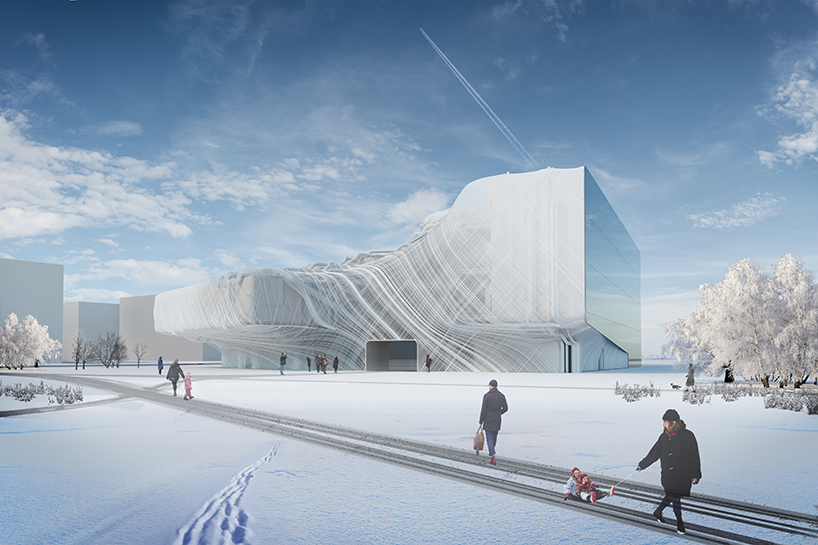 elaborating on the first topic, solid studio envisions the scientific centre with changeable research and service equipment. but why include this quality in a contemporary facility? for the last decades, the scientific agenda and requirements have evolved significantly. the complexes built in the eighties often couldn’t respond to unstable conditions, like the need of a section space for new and more powerful machines or the accumulation of dust due to certain building materials. as the team puts it, the ‘steady-state essence of architecture cannot keep up with the dynamics of progress’. however, this response to changing factors does not happen instantly; according to the designers, the optimal update rate is 10-15 years for a better architectural ‘preservation’. 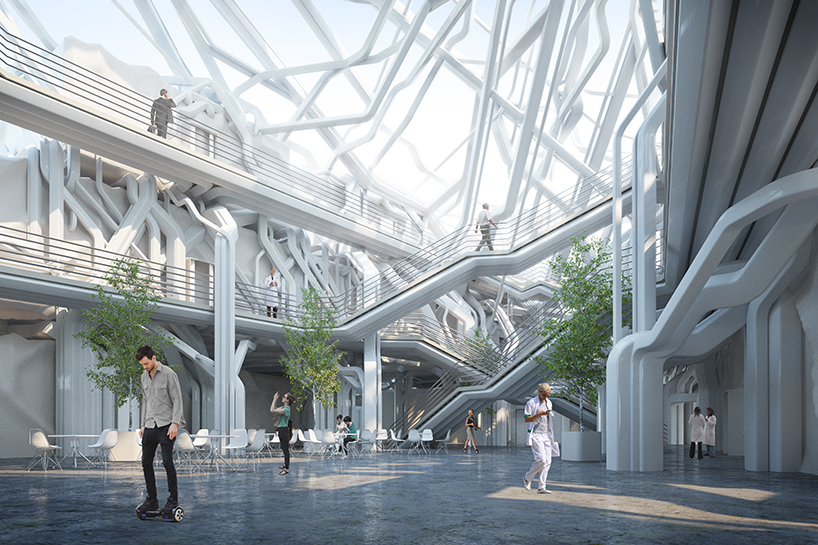 for the field of nano science, complications often include the organization of laboratories and clean rooms. conditionally, the requirements for both can be split into four groups: precise control of humidity and temperature, noise and vibration buffer, air purification, insulation against electromagnetic and radio waves. therefore, when designing the space, architects need to pay extra attention to the location of labs and clean rooms to minimize mutual influence.

since laboratories are reserved for specialized technicians, the studio focuses on the space between such rooms, the functional volumes, public spaces, circulation and adaptability. each lab has an independent isolation box that can be replaced without affecting others. auxiliary facilities such as the canteen, kitchen, and offices are also set as individual hubs scattered throughout — where gaps serve as bearing and utility structures. then, the entire program is wrapped by a shell to preserve the micro-climate within. according to technicians, if the building needs upgrading every decade, cylindrical labs are more relevant, comfortable and ergonomic than boxed spaces. after being replaced, the entire module is covered again with a protective shell. hence, with this cycle, the exterior skin also becomes an evolutionary body. 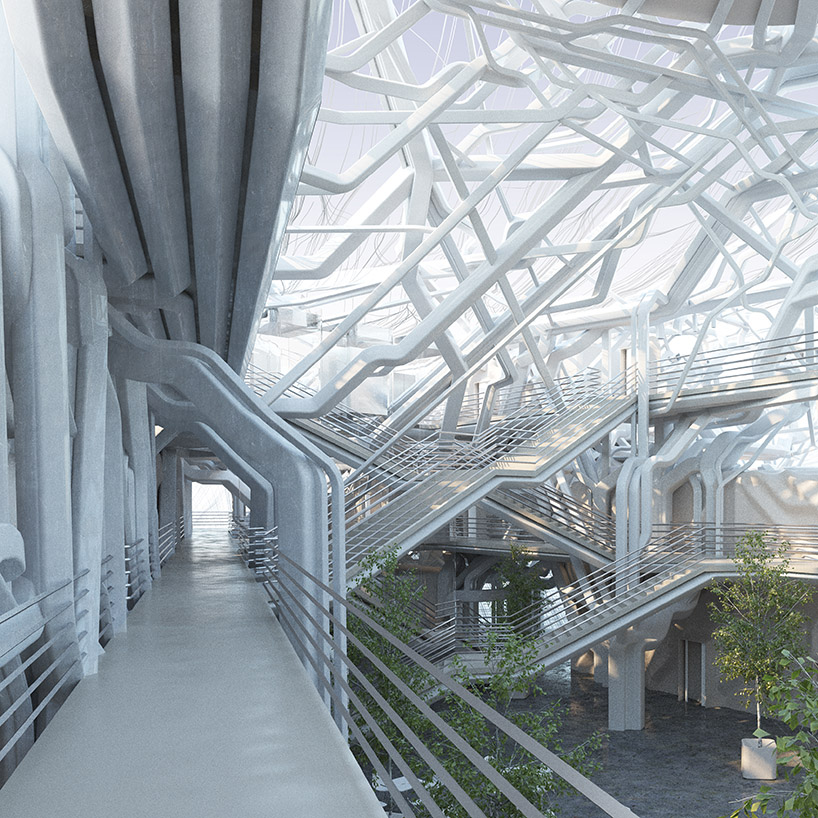 interior of the proposed science center

gradually, the studio has reached the second topic of the project: merging utility service and bearing systems. indeed, the team noticed how much space service equipments and ducts occupy — reaching up to forty percent. this comes as no surprise, since these centres require many infrastructures like channels, pipes, manifolds, sewage, electricity, conditioning, gaz and high air exchange. therefore, instead of concealing these structures, they become exposed. in other words, special attention is given to present-day designs of utility service. ‘we think the main problem of conventional approach consists in the fact that it is usually designed independently of the entire building. the bearing framework is managed by one team of specialists, the service network by another. [this] doesn’t suppose any integration between bearing and service system. it often causes un-coordinations […]. thus architects always have to provide more space for utility service, making the ceilings higher and shafts wider’, expresses solid studio. the demand in large numbers of service ducts became the starting point in exploring design solutions. after virtual and physical prototypes, it was clear that the channels and bearing systems can be blended into one larger frame to create an incredible overhanging web. this three-dimensional network of ducts, manifolds and pipes creates a spatially stable structure which encircles and bear blocks located at the base — bigger and heavier. some of the ducts go to the top, forming strings of overlapping structures over the atrium. at the bottom, tubes are concentrated in bunches like tree trunks that begin to branch upwards. the pipes are supposed to be built with C-Fab / branch technology, which 3D prints spatial reinforcement for surfaces of any complexity that can be combined with conventional fillers. then, all final pieces would be assembled on site. 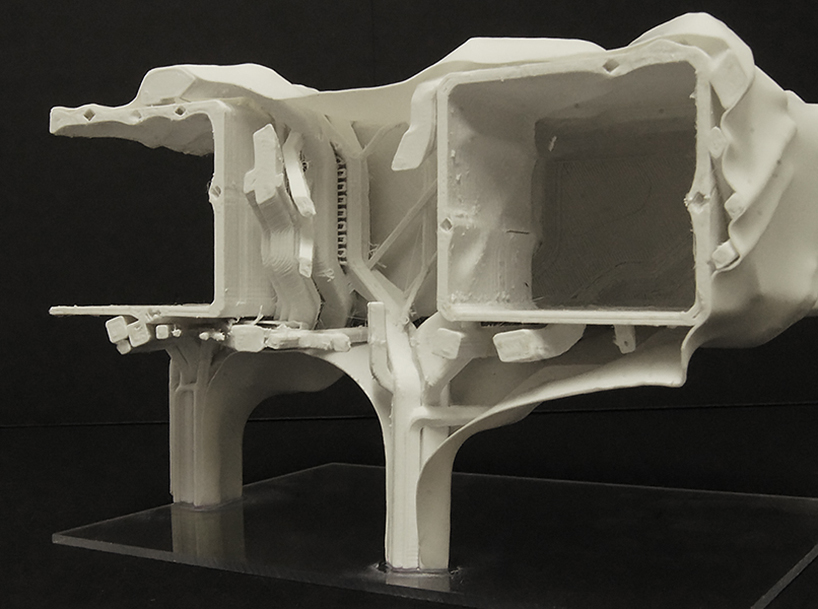 Physical model of the fragment

to ensure stability of the framework, more ducts and pipes are needed for the lab supply — yet some remain empty with a bearing capacity. in the future, if required, empty vessels could be put in operation or contrariwise, the functional ones could be stopped. thereby the proposal supposes flexibility and possibility for re-organization — like a complete living system assuming a step by step evolution. finally, the exterior of the science center also discloses a metaphor on living organisms. the shell tightly enveloping the structure recalls the veins under the skin or tree roots under asphalt. even more, in some places it becomes translucent, letting the scattered light penetrate.

the interior of the building complex is rich in public and semi-public spaces. the abundance of structural ‘trunks’ makes offers a gradation of zones with different level of privacy — enabling employees to look for a more comfortable surrounding to communicate and interact with their colleagues. 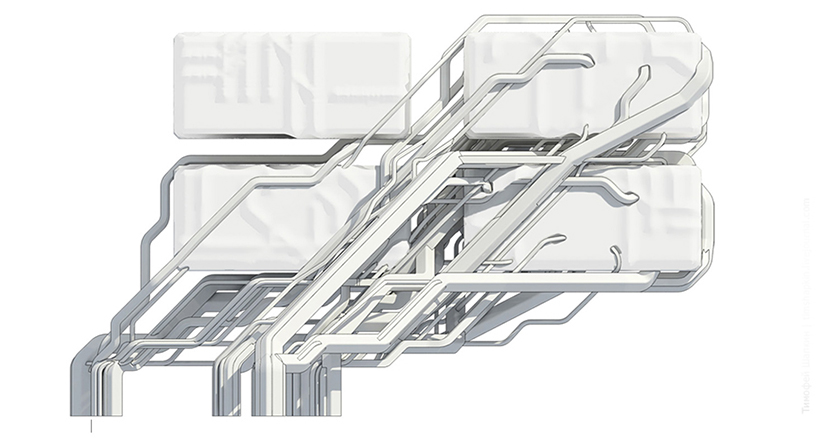 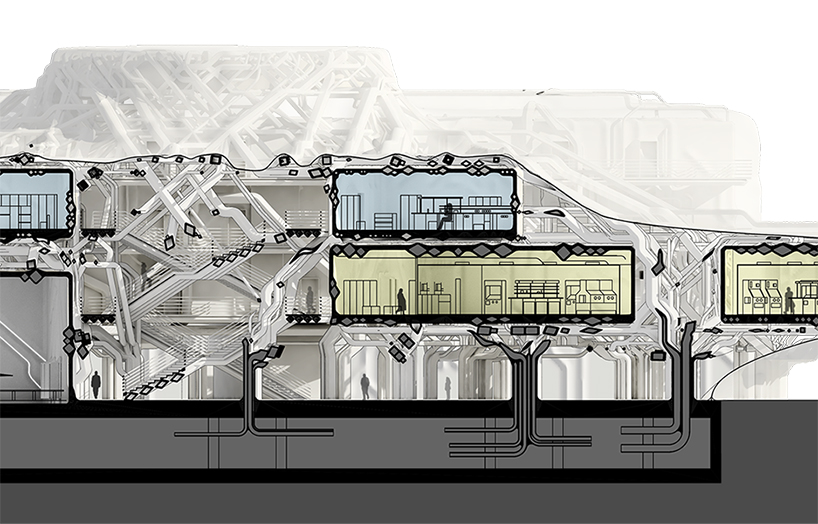 fragment of the building section 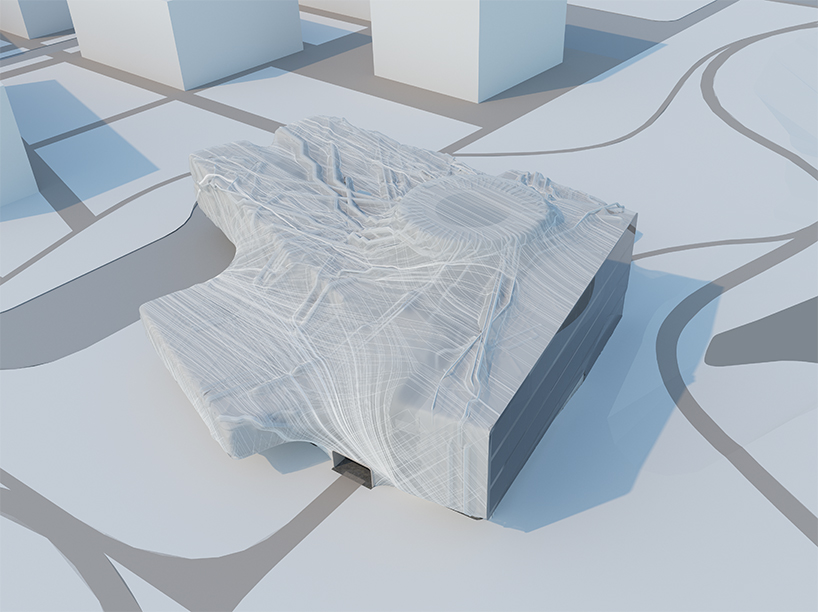 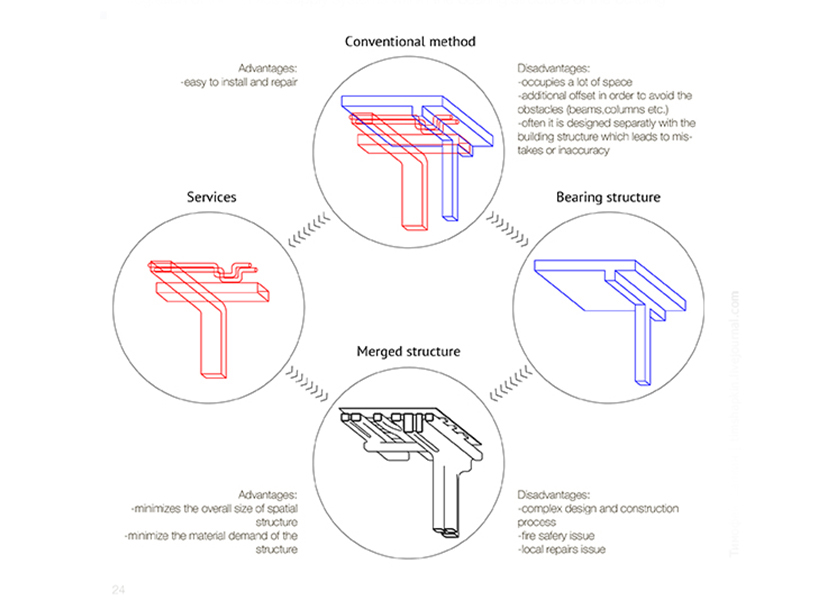 Tim Shapkin
0
0
0
password recover
please insert your email below to reset your lost password
your new password has been sent to your email address
thanks for registering
please complete the form below.