italian architecture studio space travellers envisions its FREELANDER project as a ritualistic desert environment for the fly ranch 2020. currently in its planning stage, the fly ranch 2020 will be a permanent, year-round, sustainable ‘city’ in the desert, all planned by the founders of burning man and the land art generator initiative (LAGI). space travellers had proposed this entry as part of a larger competition to co-create the massive project. the project and its three elements — ARGO, R.A.N.C.H., and the GHOST DANCERS — take roots in the deep history of the desert context, reflecting on the places and tribes that have characterized the area. the proposal seeks to inspire visitors to connect with the land’s ancient spirit through the use of the innovative and eco-sustainable technologies. 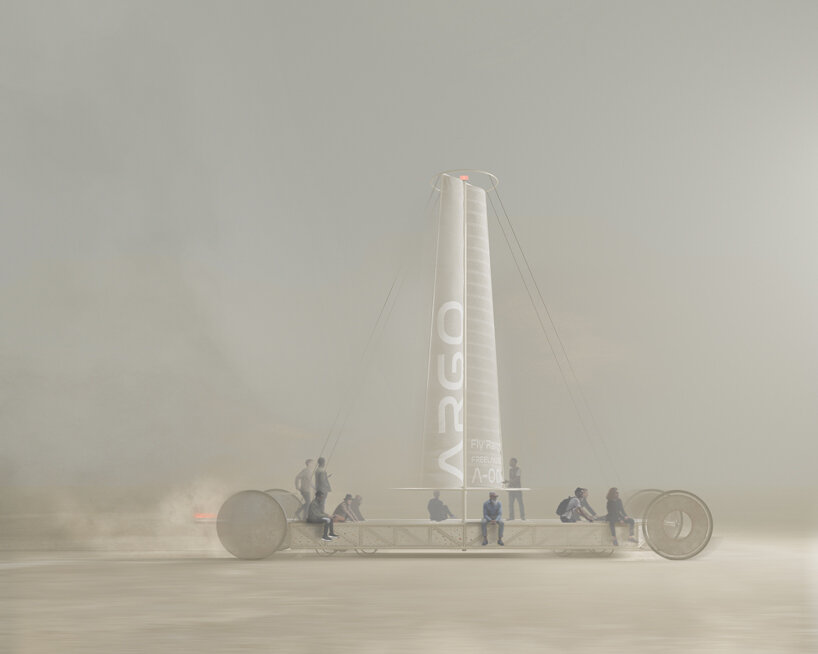 with its proposed FREELANDER project, space travellers celebrates the history of the fly ranch‘s desertous site. so hostile to human life, the land inspires visitors to retrace the footsteps of its first inhabitants, the paiute indians, nomadic gatherers who survived the harsh environment by occupying intertwined bush huts. the team at space travellers began its creative process with this historic context, and developed a strategy that takes shape by digging into the heart of these people. inspired by the history of the nomadic tribes that once lived in this area, the team named its project FREELANDER. the proposal takes shape as a large-scale intervention strategy that invites visitors to freely experience the site through the lens of different devices. these devices are each designed to represent a symbolic way to reinterpret three recurring themes in the history of the area– the journey, the nomadic life, and the ritual collectivity. 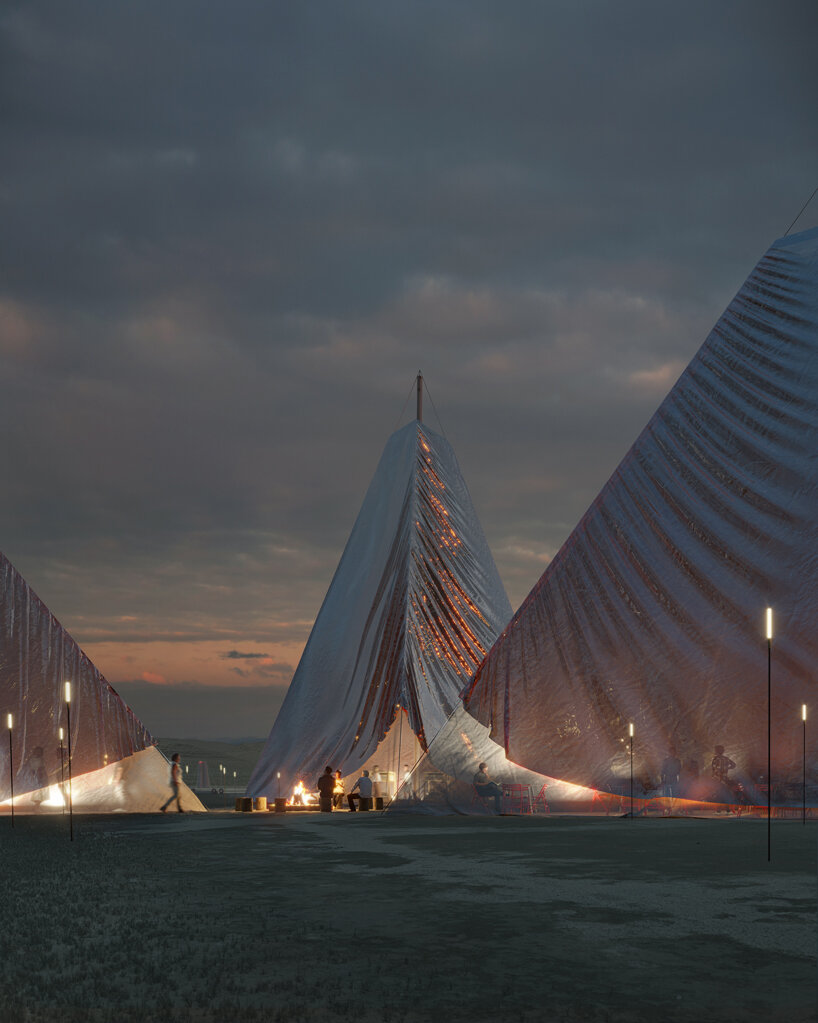 space travellers introduces the first device ARGO, to represent the ‘journey’ at the fly ranch. the vehicle allows fly ranch occupants to freely roam throughout the different areas of the project. its propulsion mechanism is made up of an enormous, rotating sail and by four large wheels. ARGO is powered by the thrust of the wind and, occasionally, by a back-up cycling system. following a study of the area’s wind patterns, the design team generated an itinerant route that engages with the wind most efficiently and favorably. the crew planned for argo is composed of a helmsman, four cyclists, two members in charge of the sails, and a lookout at the bow. the vehicle can then carry up to four more passengers for a total of twelve crew members.

with the next device, R.A.N.C.H., space travellers represents the ‘nomadic life.’ for a true nomadic experience, it is fundamental to have the appropriate means. R.A.N.C.H. is not only a survival kit but an integral part of the journey itself. thanks to the materials that it contains, the device can help its occupants survive the desert for up to two days. in this way, visitors would be able to immerse themselves completely in nature. inside, R.A.N.C.H. contains various tools necessary to survive and navigate the desert. along with camping standards, the R.A.N.C.H. offers both a hut and an environmental map. 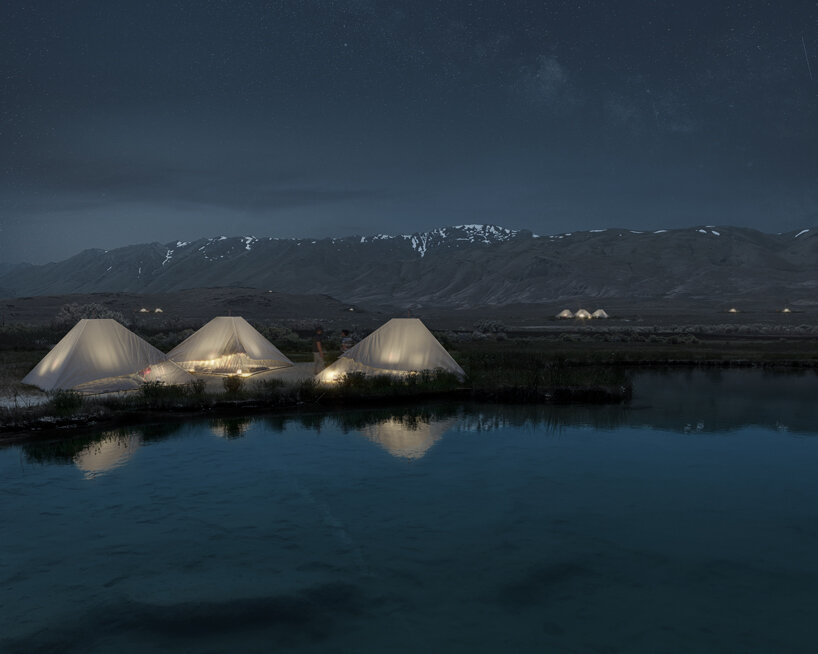 the final device, GHOST DANCERS, represents the ‘ritual collectivity.’ the name references the cult of the dance of the area’s ancient spirits. with their ritual movements, the paiute sought to invoke the animals and the rain. space travellers envisions three large sculptures to celebrate these god-like spirits. GHOST DANCERS is both the main base-camp of the area and a sculpture that represents the strongest landmark of the project. it acts simultaneously as a terminal and departure deck for all the visitors, offering them space to shelter, eat, and care during the day or night. 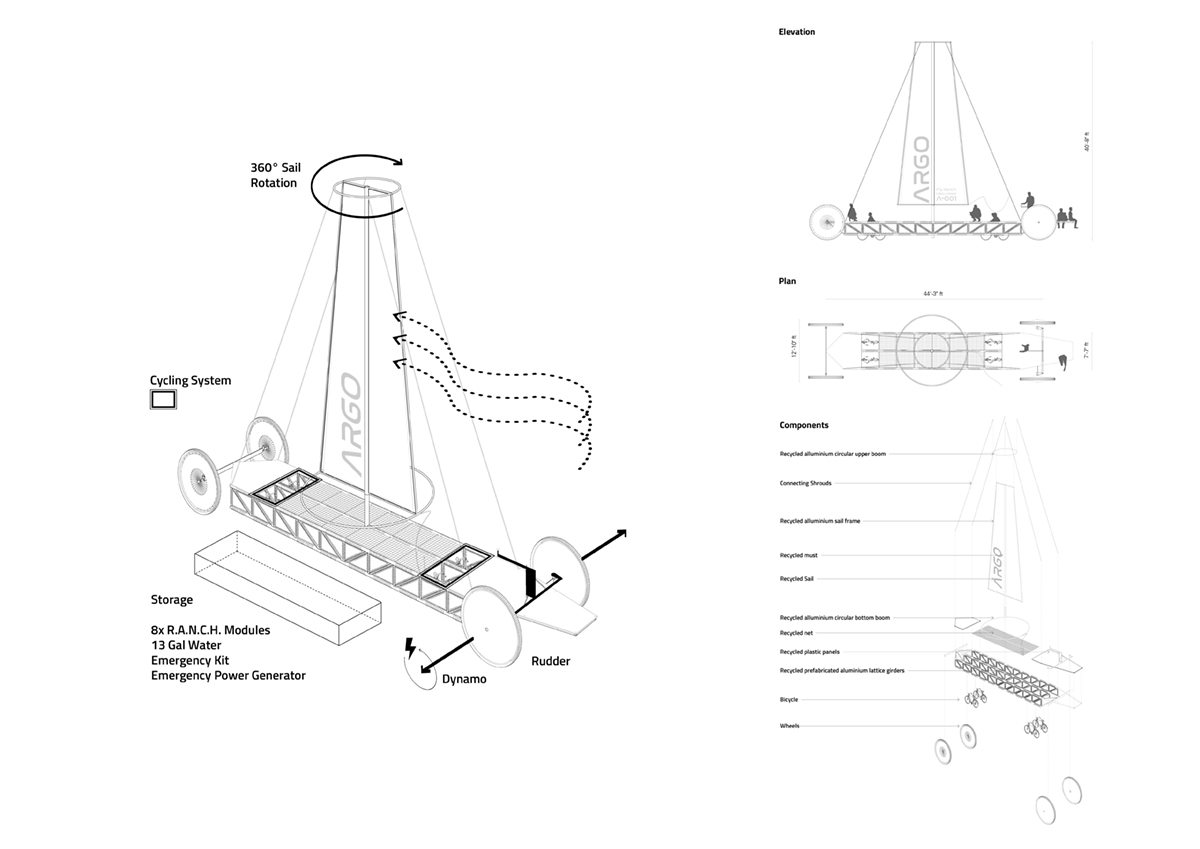 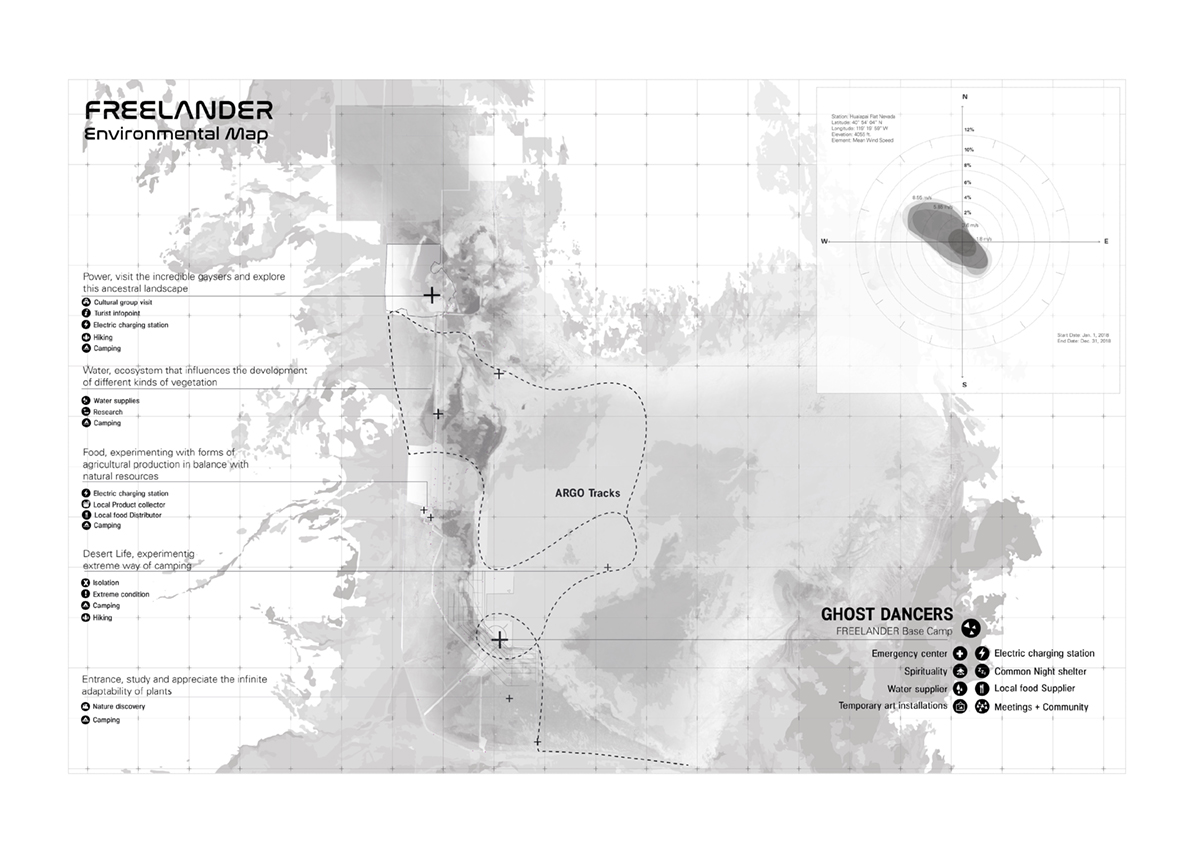 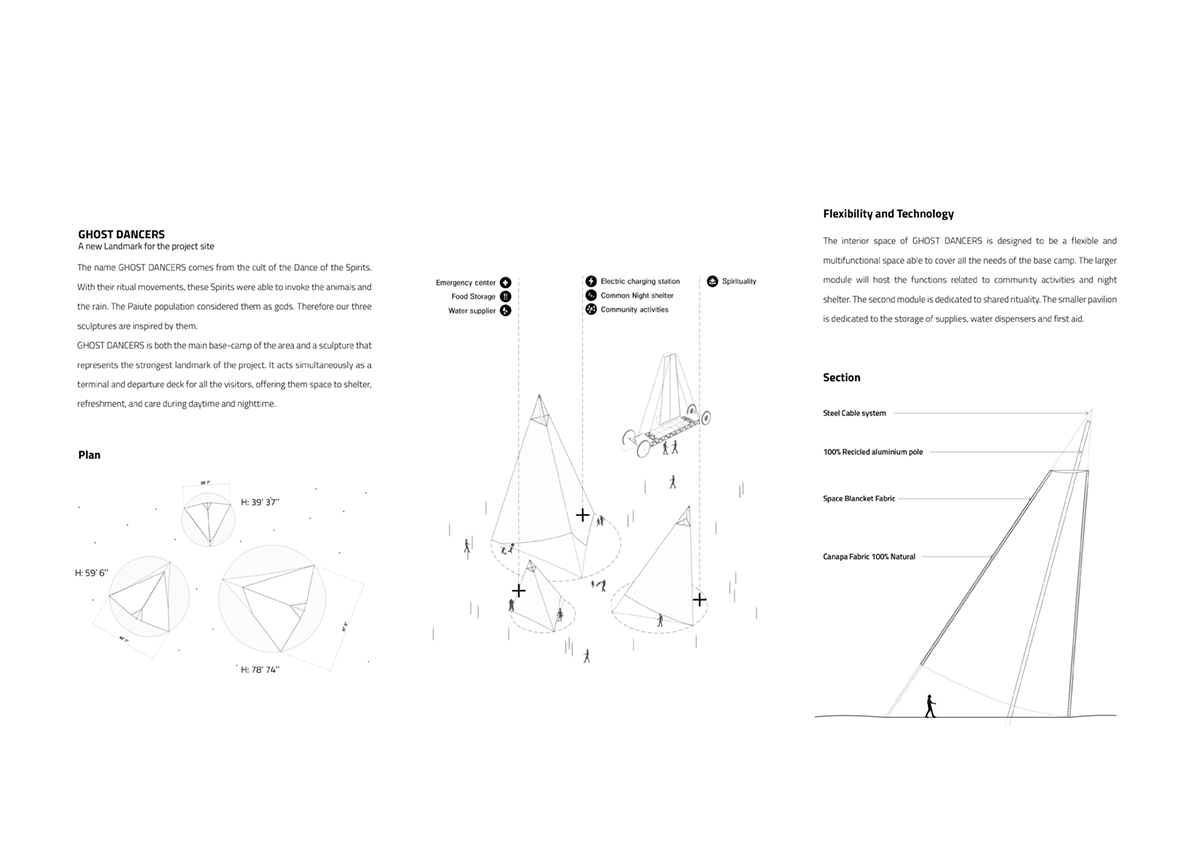 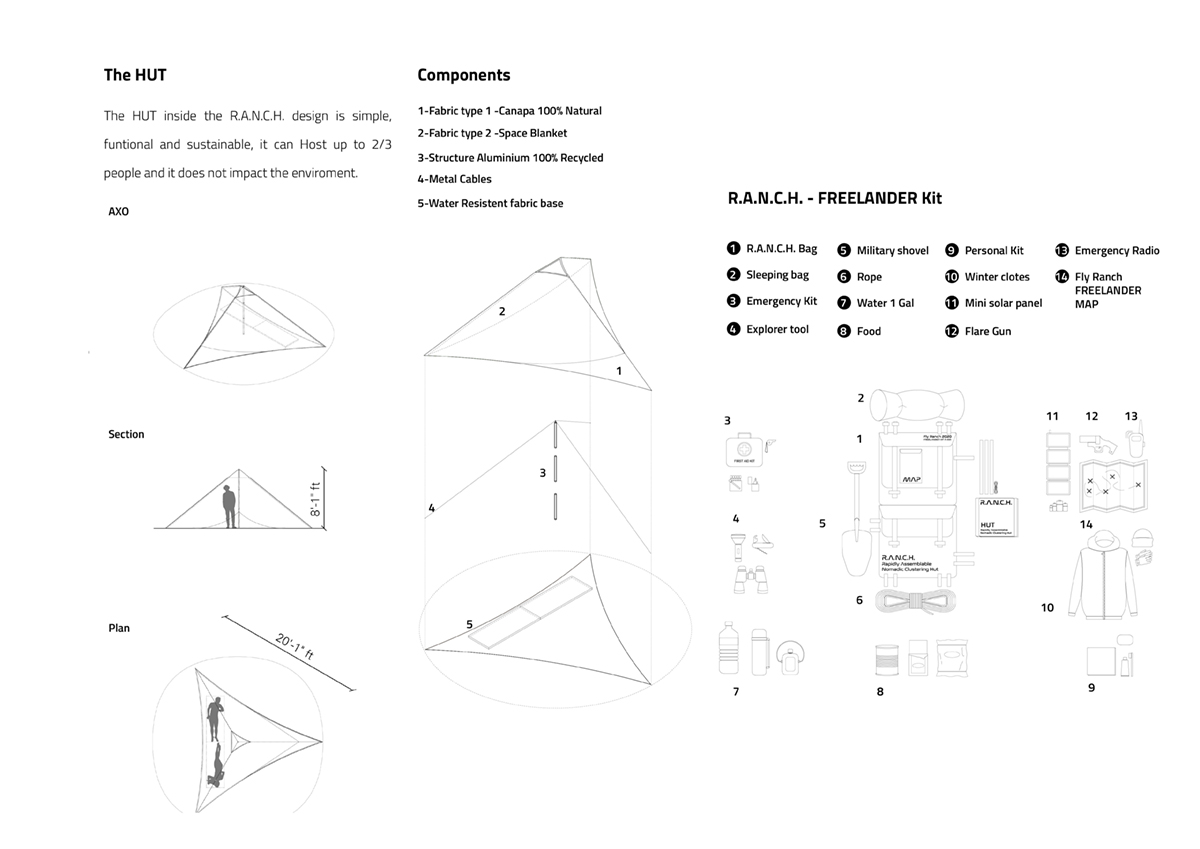 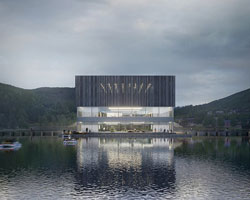