london-based steyn studio partners with square one landscape architects to realize an effortless fusion between nature and the built space in south africa. the project takes form as an undulating garden that wraps over new buildings, which in turn are woven back into the landscape with intricate trellis structures. it’s a subtle celebration of the breedekloof valley in south africa’s western cape region’s rich cultural history, and draws its inspiration from the san who first inhabited the valley and who were later joined by early dutch settlers. along with the gardens, the project is programmed with a gift shop and café, servicing the region’s ‘bosjes estate’ retreat. 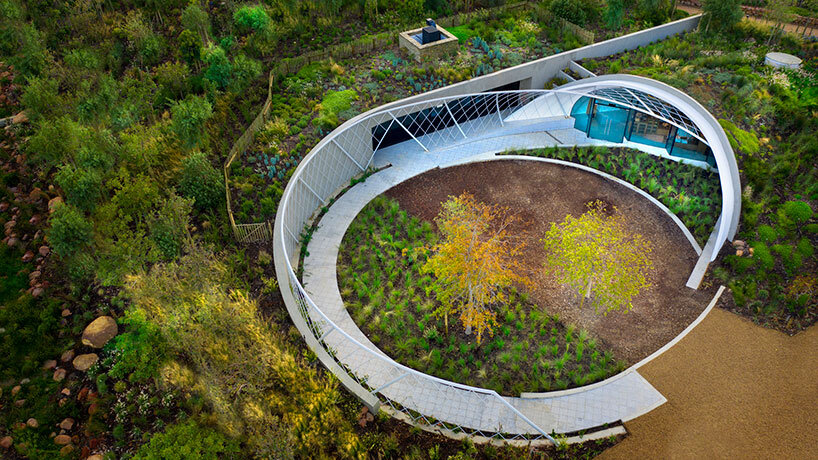 steyn studio‘s south africa gardens are a conceptual microcosm of the broader landscape, referencing the regional context of the agricultural breedekloof valley. the new didactic gardens therefor cultivate the land with enchanting playscapes that encourage children and adults to engage with the natural world, and the buildings nestled within it. diverse ecologies were created by integrating wetlands and natural water treatment systems with forest habitats and rehabilitated indigenous vegetation. together with square one landscape architects, steyn studio partners with meyer & associates and interior designer liam mooney studio. 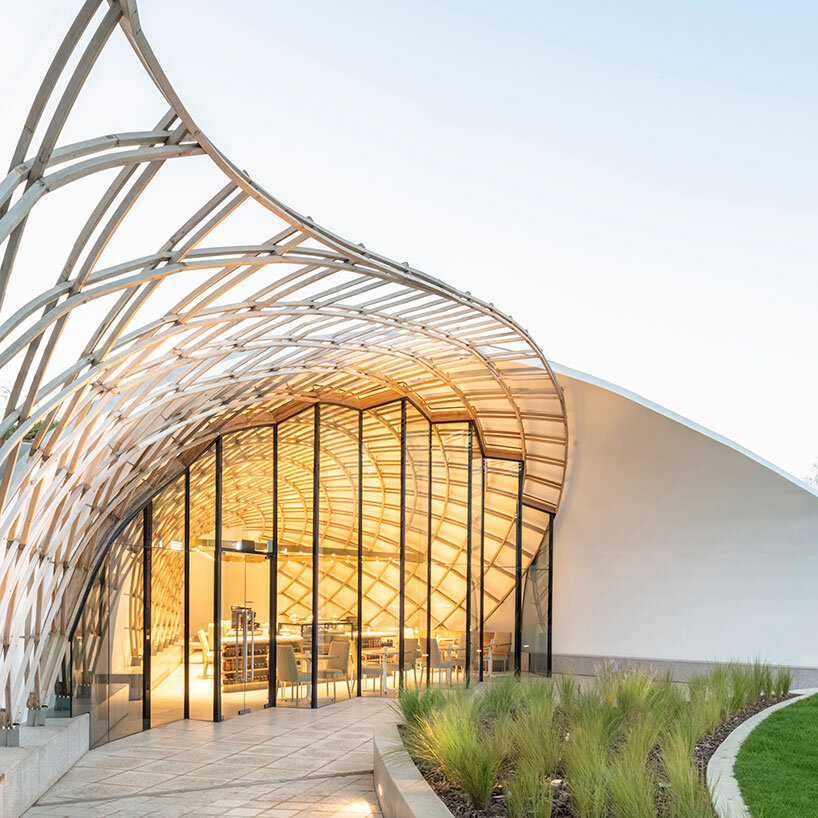 the overall design of steyn studio’s garden project in south africa respectfully acknowledges the presence of the historic manor house and chapel on the estate. at the same time, it visually enhances the previously established relationship between the two, as well as the surrounding vineyards and mountain backdrops, balancing its composition with new planting and the creation of a series of processional routes. the landscaping and buildings were carefully designed so as not to compete with the existing architectural features of the estate. it has a low visual profile with tree planting reinforcing the existing visual axis and landscape features such as tree wind breaks stitching it back into the surrounding rural landscape. 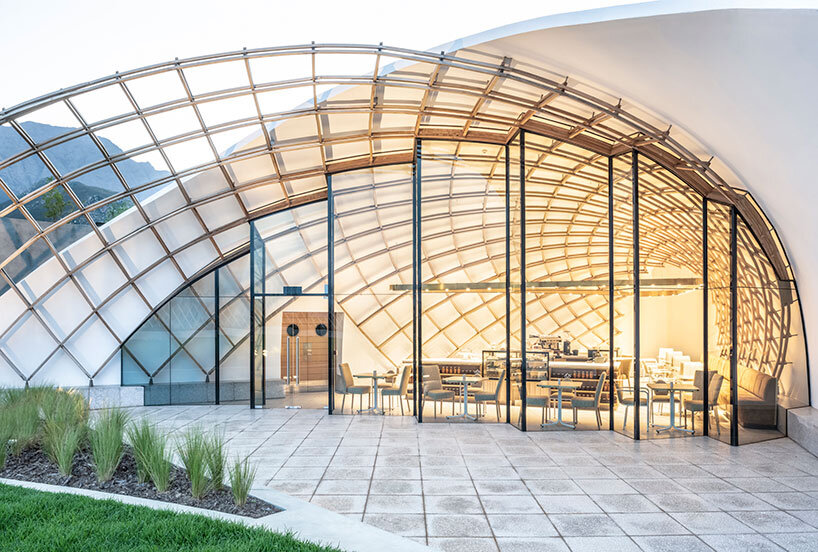 the simple architectural forms of the buildings were inspired by the huts of the san called a ‘matjieshuis’ (mat house) as well as the first dwellings of the dutch settlers, called ‘kaphuis’ (truss house), which was apparently influenced by the san. the kaphuis could therefore have been a hybrid of sorts between these two cultures. the matjieshuis was a portable, curved, slat-framed structure covered with woven mats, used by san herders as they migrated seasonally with their cattle during precolonial and early colonial times. the kaphuis was a series of a-frame trusses covered with thatch, with the interior lowered to allow for more headroom. both structures were part of this historical landscape and blended subtly with their surroundings. the mounds of the new structures have an uncanny resemblance to the nearby surrounding hills. 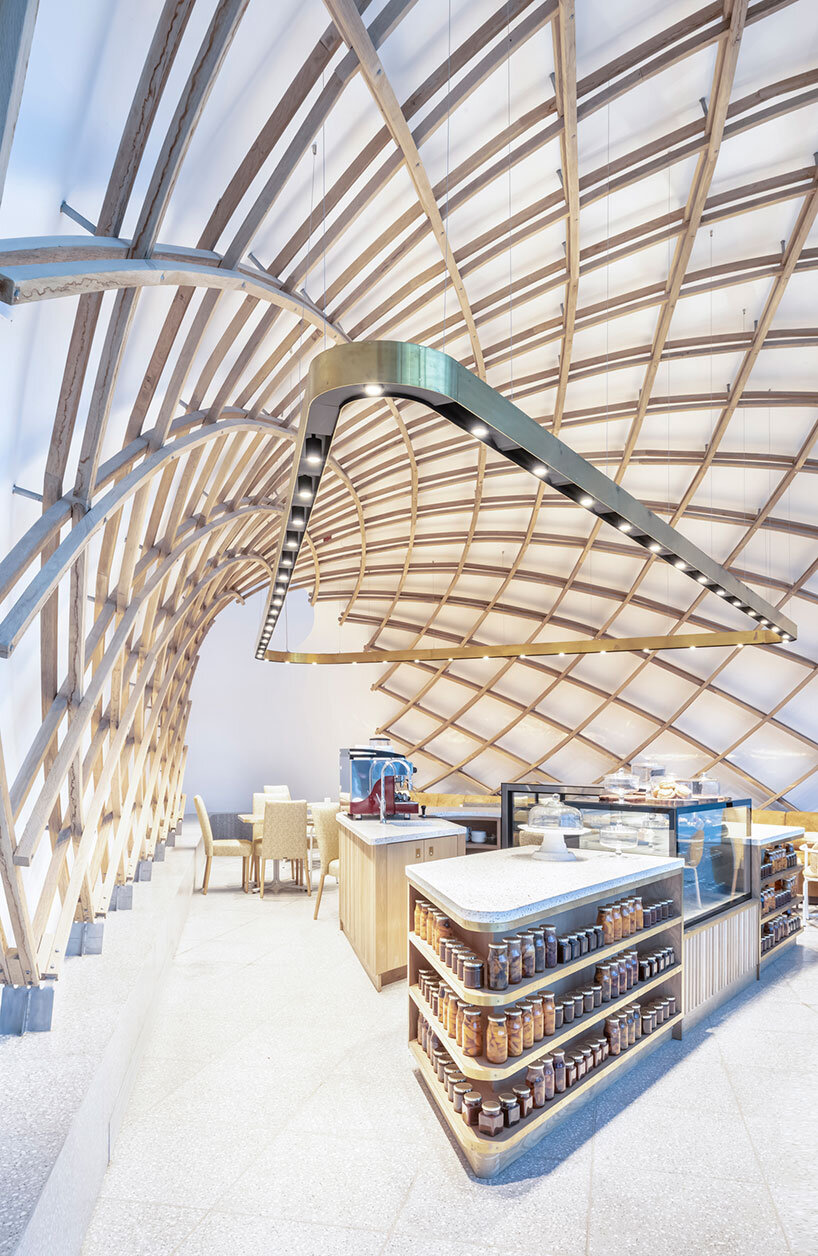 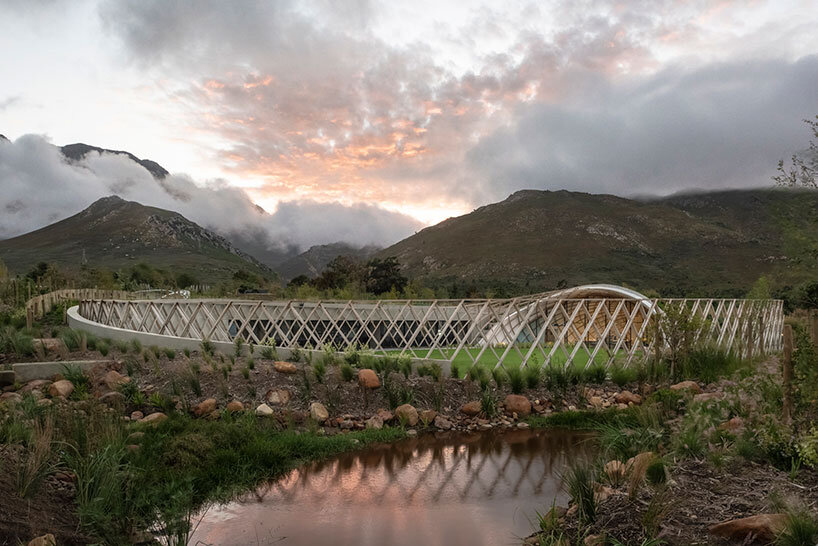 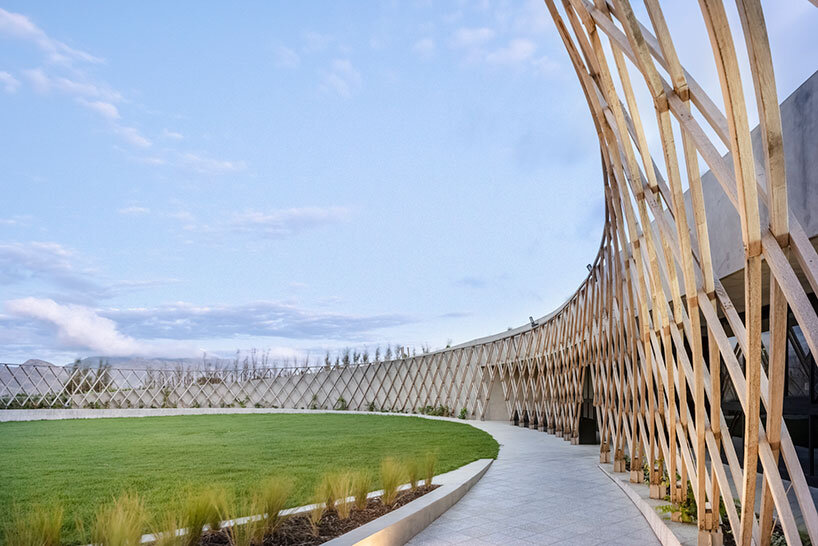 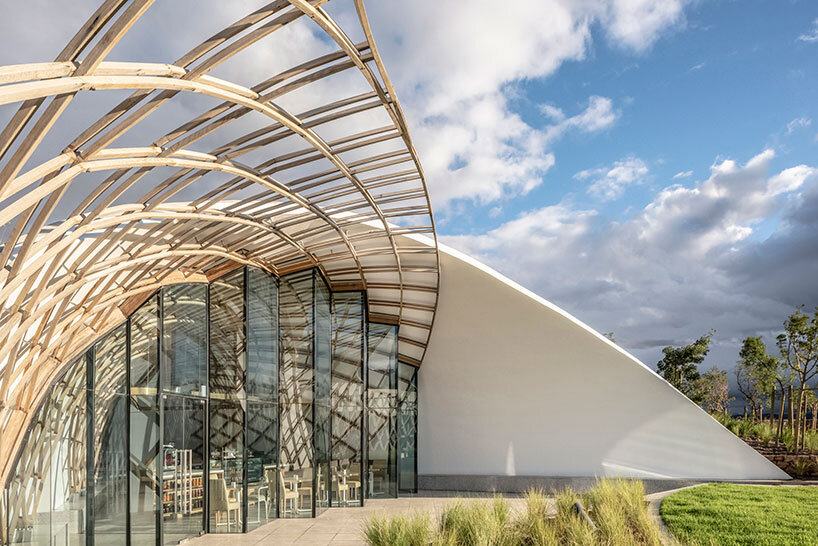 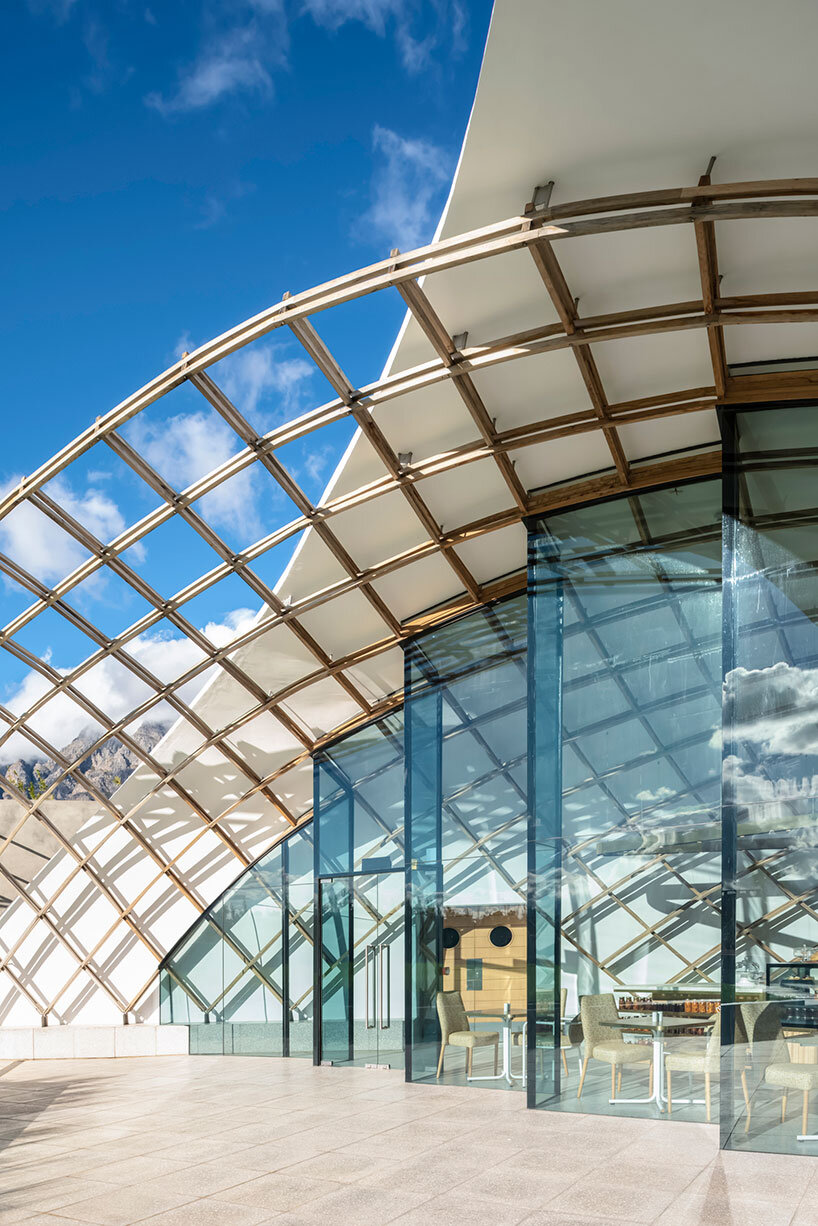 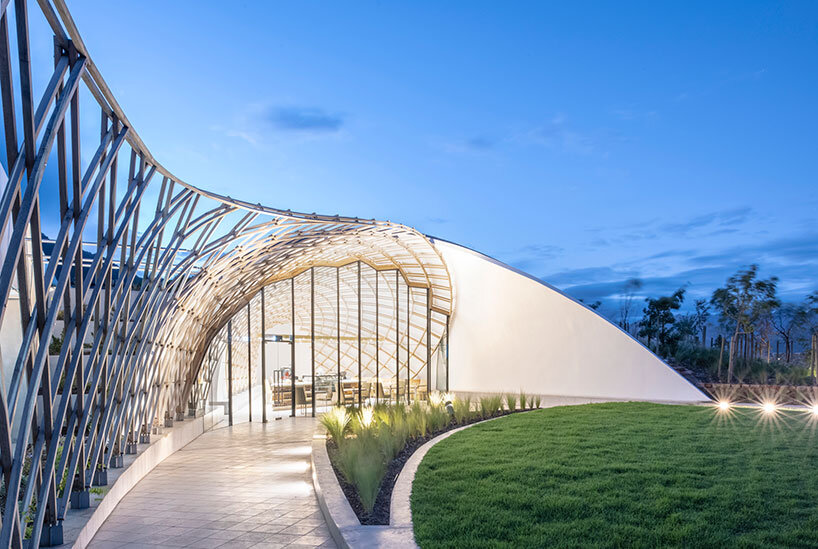 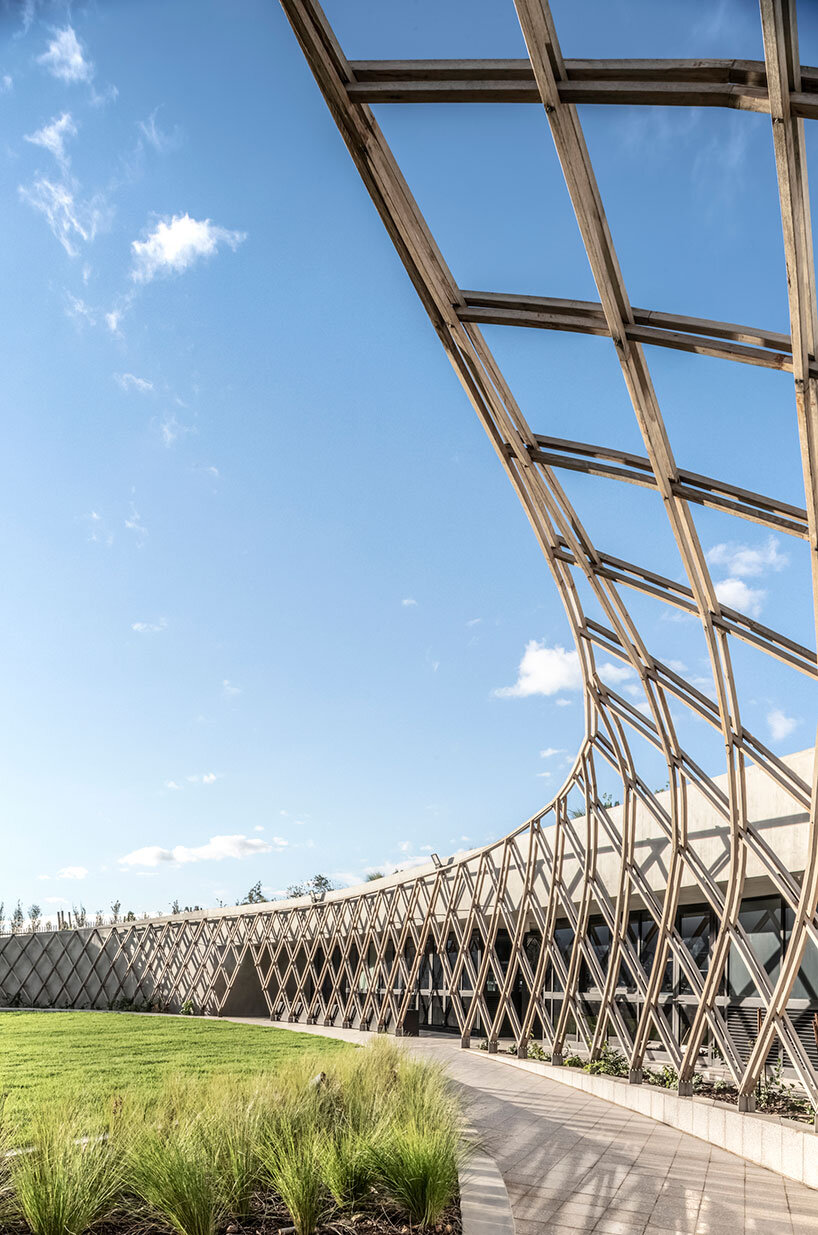 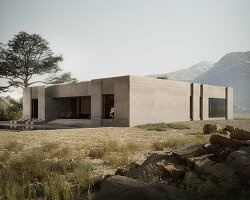 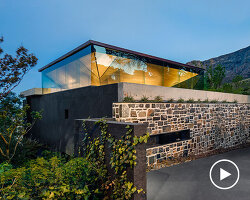 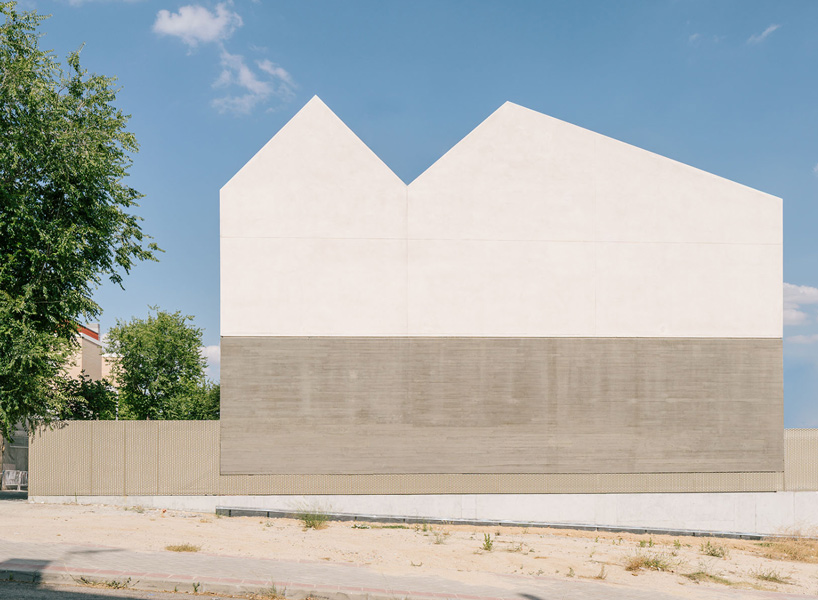 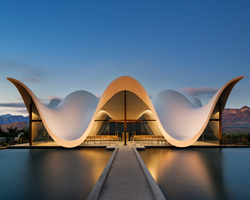