straddling the borderline between two provinces in the netherlands is the latest architectural offering by studio frank havermans. despite its futuristic appearance, the piece makes reference to the area’s past and the steel digging tool that helped shape the dutch landscape. 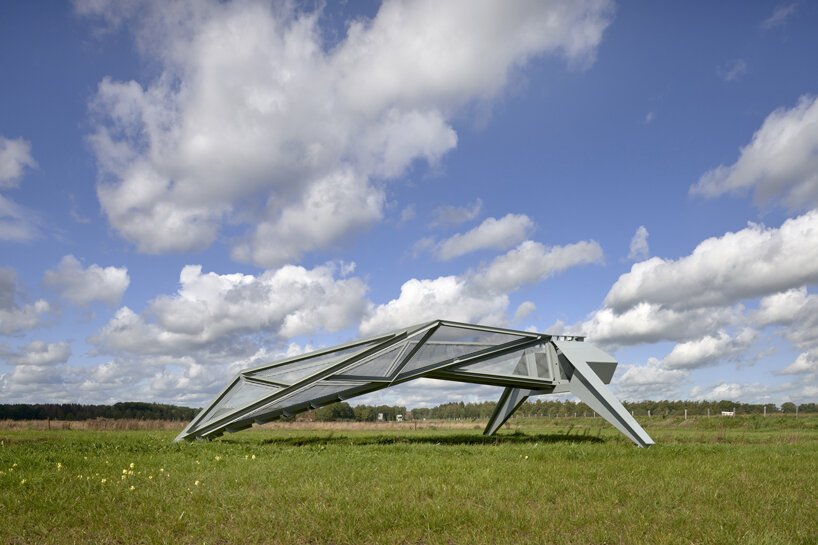 the project was commissioned by friesland province, who asked studio frank havermans to design a landmark for this border site between friesland and drenthe. the area of the site is commonly known as ‘oude willem’ – or ‘old william’ – after a shepherd that roamed the land in the 19th century. in the absence of provincial borders, willem’s sheep grazed freely. then, in the 20th century, the area was cultivated and enjoyed a prosperous period of farming and cattle breeding. 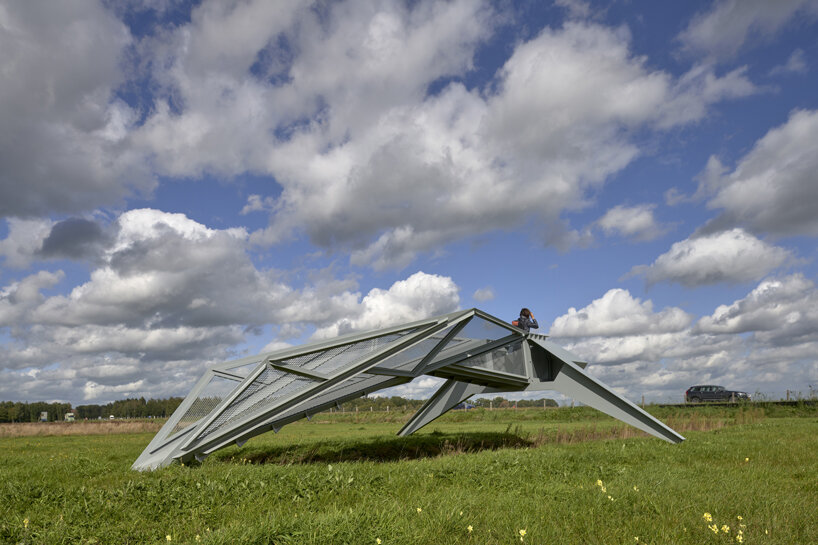 the province of friesland has now decided to let the oude willem area attenuate back to nature as part of a new national park called ‘drents-friese wold’. oude willem will be virtually left to its own devices and over the years, it will revert to wilderness. 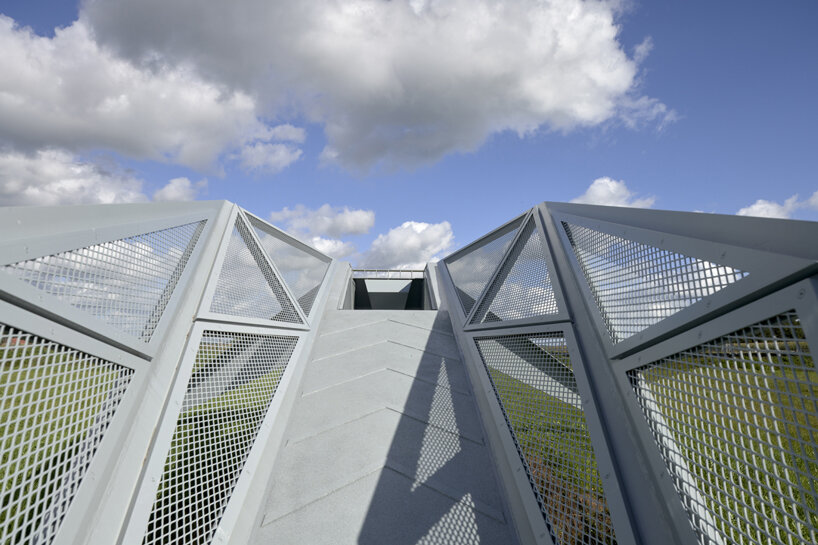 studio frank havermans‘ installation is designed to mark this transition from cultural landscape to nature. ‘it tells a visual story about man’s monumental efforts to cultivate the land and, at least as important, questions it as well. for motorists, this platform on frisian soil announces the border with drenthe by referencing the black-and-white stripes of the 1894 boundary posts,’  explains the studio. 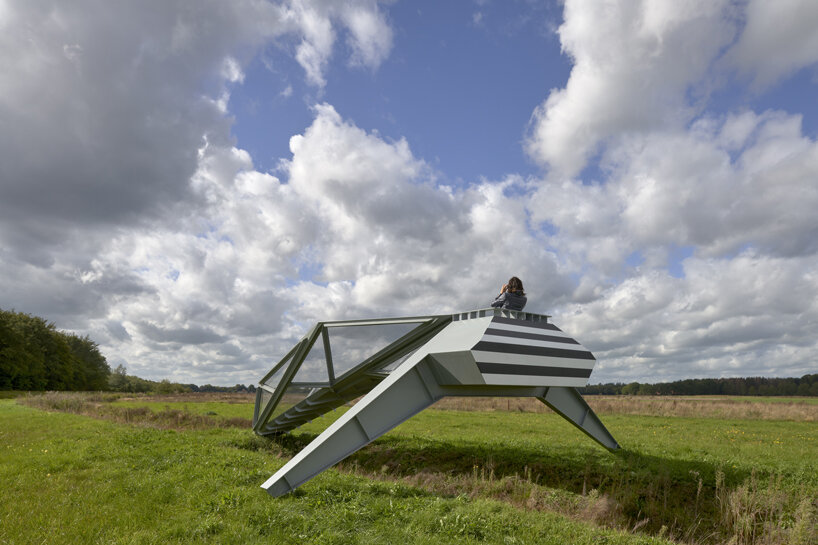 the structure itself makes direct reference to the specially developed tool that has been used to dig ditches, which are necessary in the netherlands to keep the land dry for cultivation. the tool is a giant v-shaped steel shovel that is attached to an excavator. ‘as a final human intervention in this new piece of nature, I use the v-ditch bucket to move the ditch at the edge of the field. by digging a diagonal line and closing the straight demarcation, the old structure is interrupted, opening up space for reflection. after the shepherd and the farmer, oude willem now belongs to the strollers,’  says studio frank havermans. 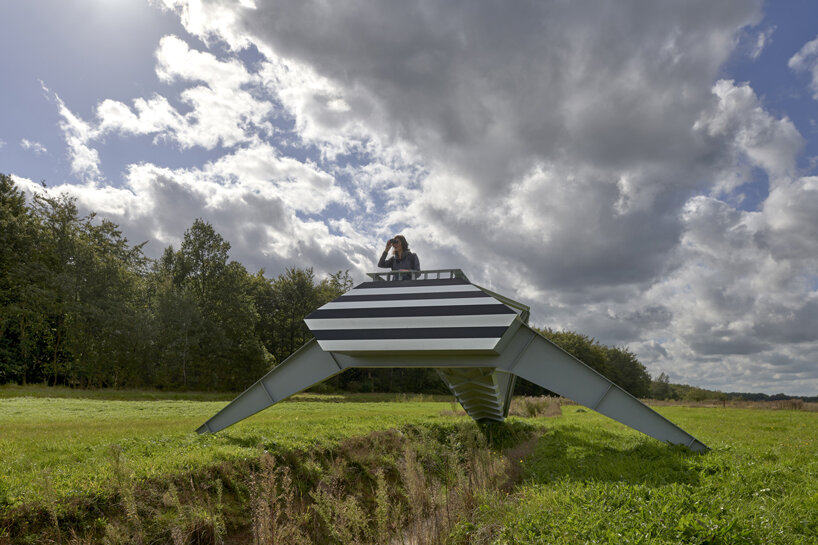 the steel digging tool is enlarged and turned upside down to create the basis for the platform. in this way, the landmark invites passersby to interact with it and the landscape. ‘the installation provides the visitor with a moment of elevation; to watch the traffic, look for birds, recite a poem, give a speech, advance a thought, solve a problem, to think, look at the clouds, to contemplate, to pause, to imagine the past with oude willem the shepherd or, on the contrary, to envision a future in which the platform has landed momentarily,’  says the studio. 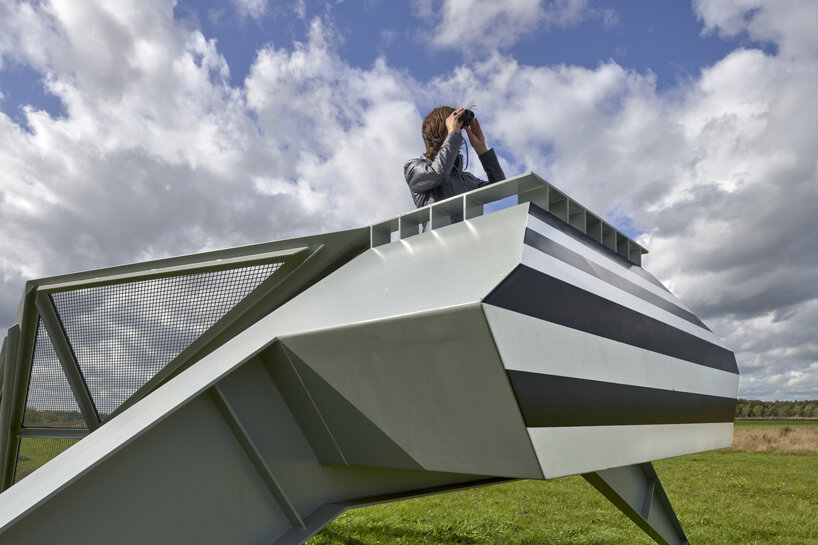 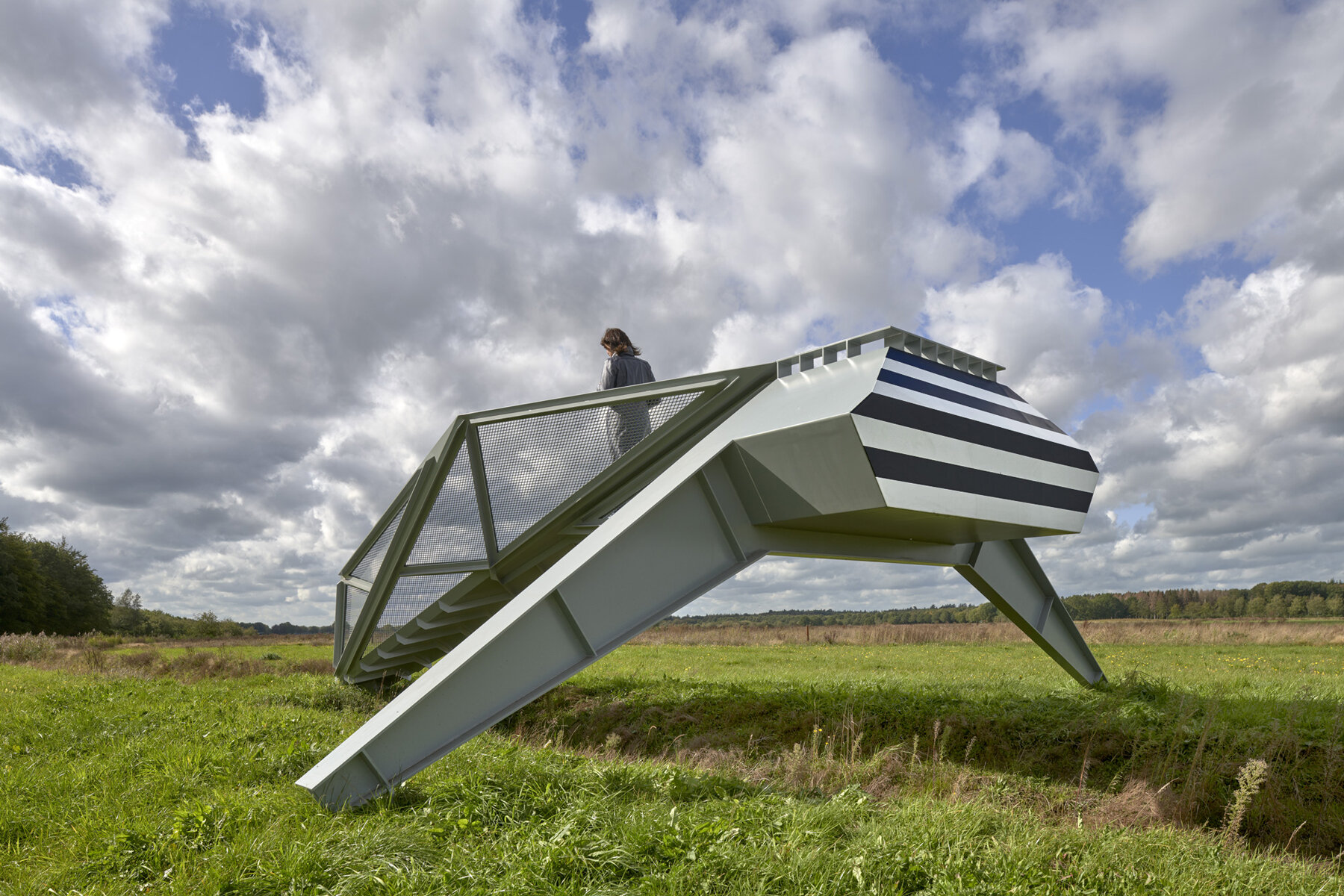 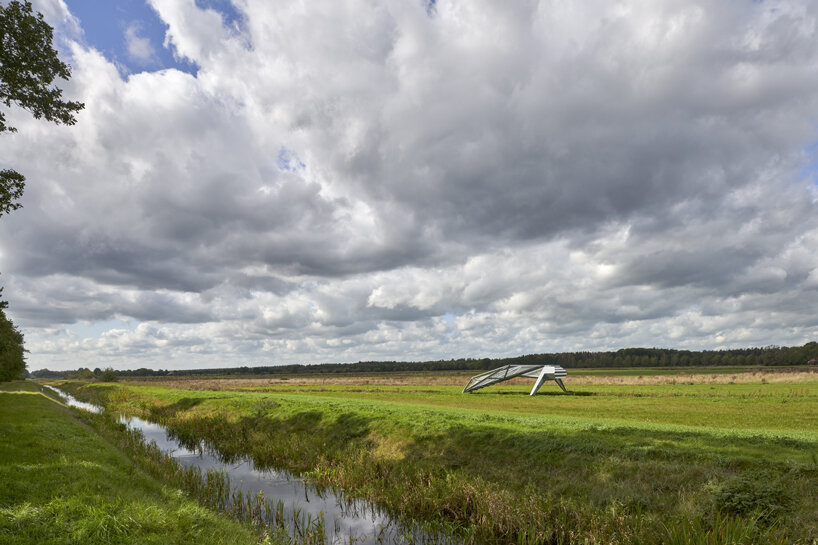 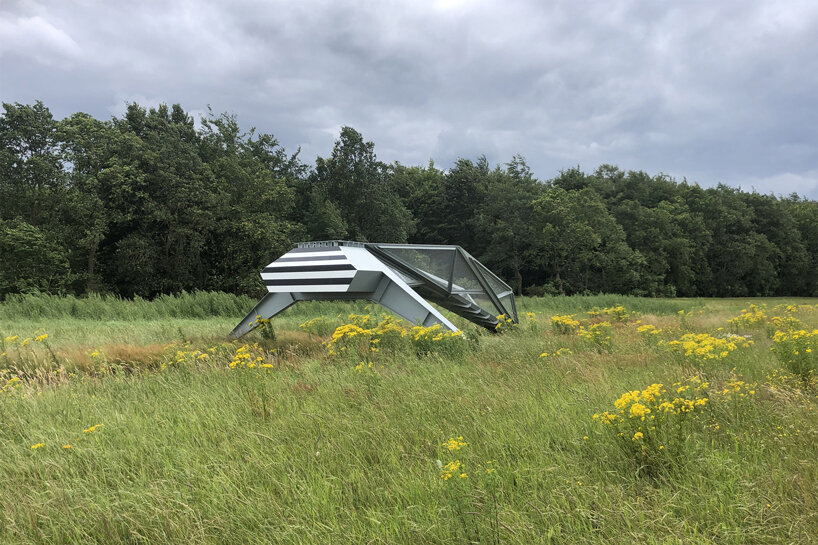 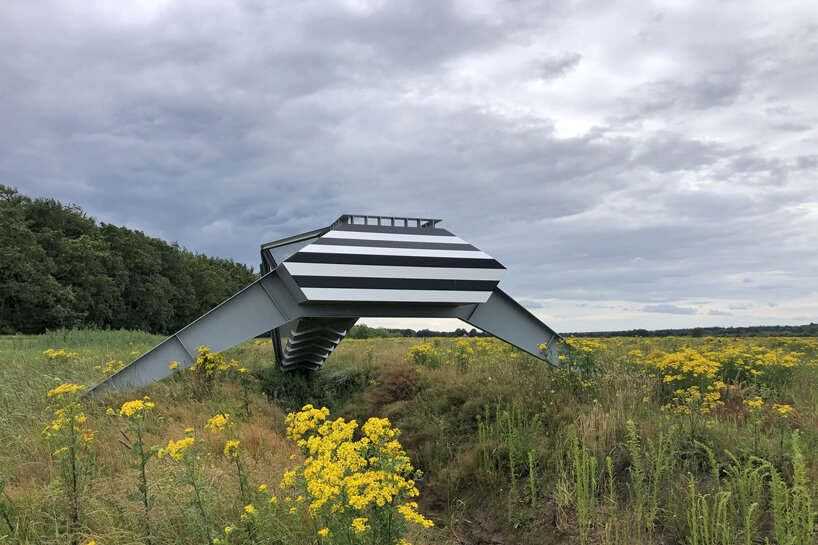 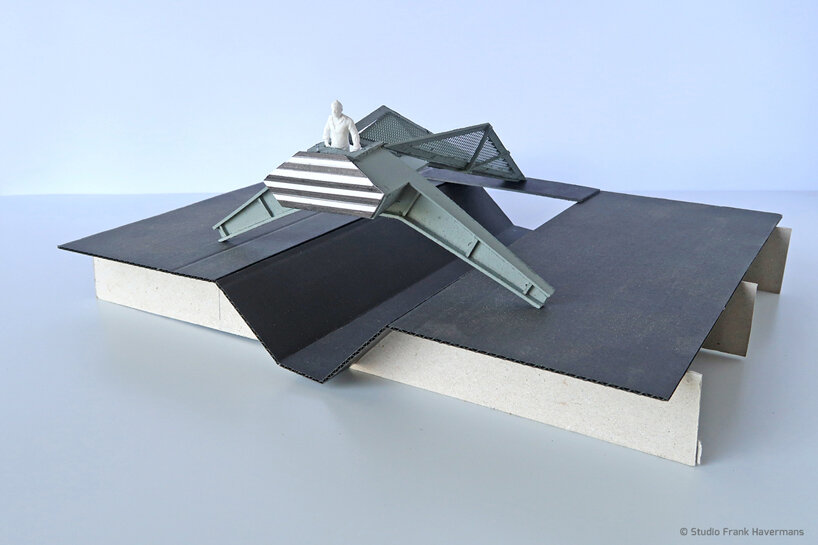 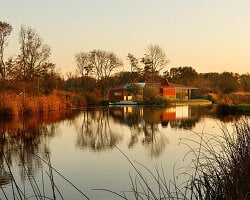 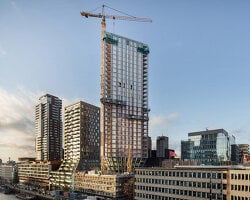 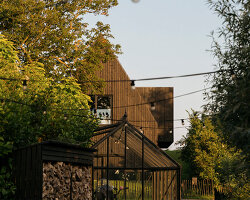 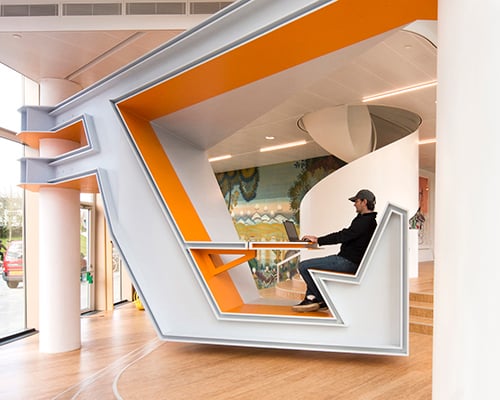 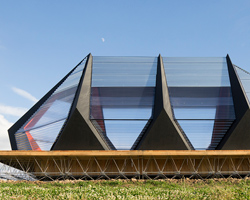