american firm studio shift were commissioned by the architectural and urban forum (AUFO) of milan to develop one of 12 proposals for the recent exhibition ‘milano stadt krone 2030’ – filling the void which offered densification solutions of the city. the proposal injects 25,000 inhabitants into the existing fabric of  milano for a total population increase of 300,000. 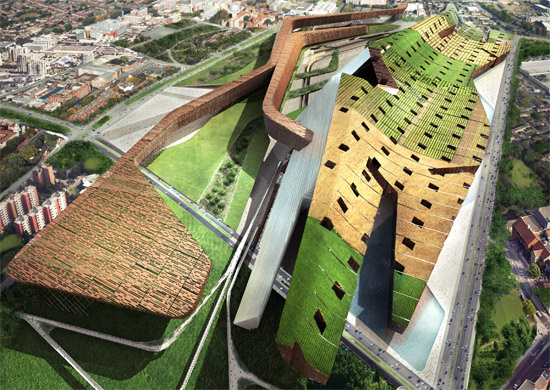 crafting a denser, sustainable milan requires not only an understanding of the region’s history and agricultural roots but also consideration of a future in which natural resources are increasingly scarce.  the lombardy region, home to approximately one-sixth of all italians, has now become the dominant industrial center, is responsible for the production of over one-third of the nation’s agricultural output. it is critical that this relationship between production and consumption is not only maintained but is also augmented through forward-thinking development strategies as the city continues to grow.as a major exporter of agricultural food products, increasing foreign demands will surely be placed on italy’s capacity for production; in order to meet these ever-expanding external and internal needs while simultaneously coping with dwindling available arable land, new plains must be created and harvested. 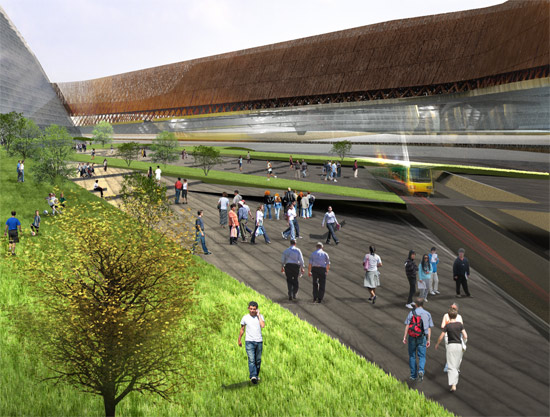 one of the courtyards

the radical nature of the project, specifically the insertion of twenty-five thousand new inhabitants at this site, on the periphery of the cultural and economic center of the city, requires an equally radical response. the population increase will most certainly impose enormous demands on existing infrastructure and the social and economic well-being of the population will face new strains.

in order to address this situation, their proposal employs a comprehensive strategy that simultaneously establishes a self-sustaining community and one that seeks to integrateprogrammatically and physically with the existing city. 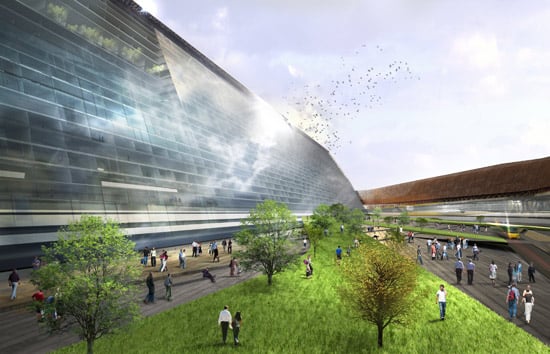 in response to the outlying agricultural lands to the south of the site, the ground plane is raised and bent towards the southern sky for optimal solar exposure. this surface is then developed as an arable facade sheltering the new residential development. a patchwork of crops is then planted based on ideal positions for each species vis-a-vis solar exposure and water retention. crops that flourish in drier soil conditions are located higher on the façade while those that require more moist conditions are found in the lower region.  an integrated mechanical movement system allows workers to traverse the agriculturally laden facade/farm in carts that travel along a network of rails and facilitate the harvesting of crops. 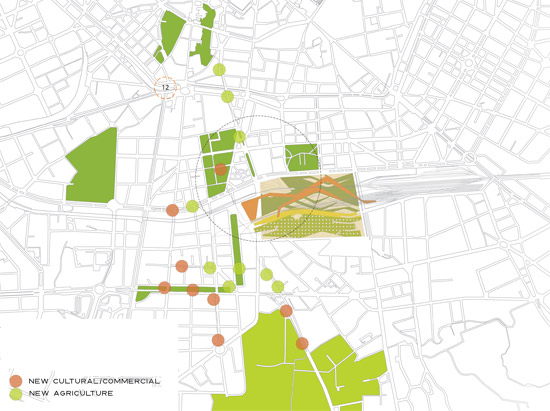 the operation of raising of the ground plane and bending it skyward allows for the insertion of residential program beneath with two highly differentiated living conditions.  below the agricultural facade on the south, courtyard apartments are inserted while the north-facing apartments consist of  modules arranged in a large, glazed mosaic.  the void that results from this ground manipulation is articulated as a multi-level, sunken piazza with a direct connection to a proposed extension of the existing rail line.  envisioned as the heart of the project, this public space is intended to provide opportunities for both active and passive recreation as well as provide a physical connection to the new office, commercial and museum program on the northern edge of the site. it also serves to connect the project with a new sports facility to the west and the existing urban fabric to the east.  it is at these points of connection that the sunken piazza passes below the streets and slopes back up to the established ground plane. optimizing the visual connection to the existing city, the majority of the new buildings are raised above the ground plane to allow for views through the new proposal to the adjacent urban context.  this also enables the extensive green spaces to slip under the buildings creating a series of structures sitting above the landscape.

in much the same way that the existing rail systems converge on one location and then separate and infiltrate the larger city, the new programs congregate, intersect and disperse to serve the population. with a disproportionate number of key cultural institutions in the historic center of the city and the city center’s resulting lack of green space, the proposal seeks to respond to these deficiencies by creating an inversion of the existing predominant program as it occurs between the center and the new development. as the infrastructural strands reach out towards the center of the city, they integrate pedestrian movement with green space or agricultural production nodes.  as those same strands and nodes approach the proposed project they address the lack of cultural amenities on the outer edge of the city and begin to provide opportunities to experience a variety of such programs.  the infrastructural strands graft onto existing structures above the ground plane where possible, introduce new structural support systems where necessary and descend to merge with the ground plane where opportunities exist to insert green space nodes or similar programs.  their intention is not to usurp current urban movement patterns, but to supplement them. these connections, woven into the city have many possible manifestations but in each scenario the intention is to integrate the new proposal into the city at a programmatic level, bringing the people closer to their food, services and goods, and reducing the need for extensive mobility. 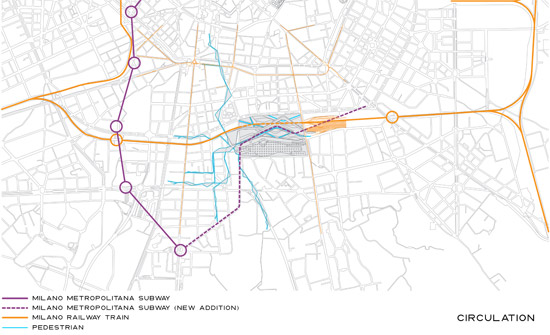 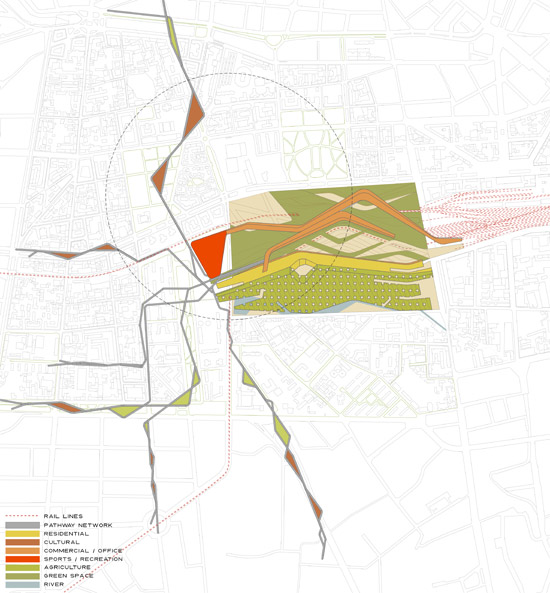 the programs of the project 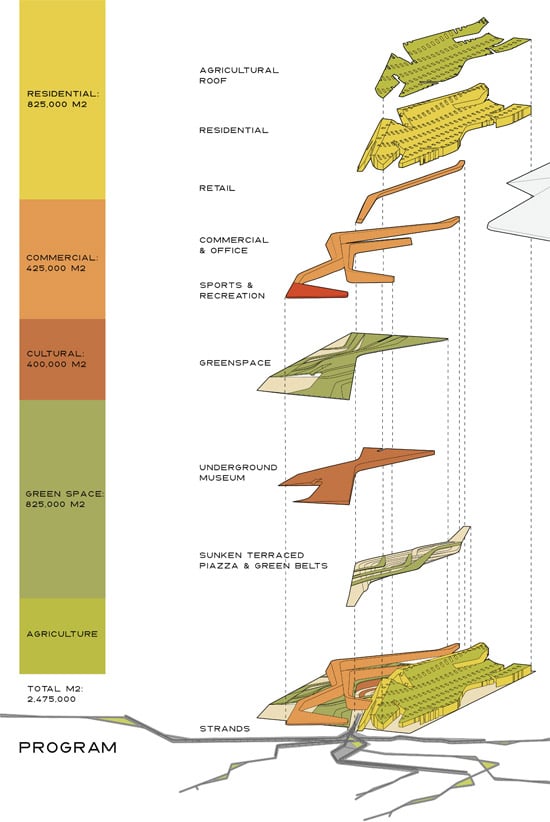 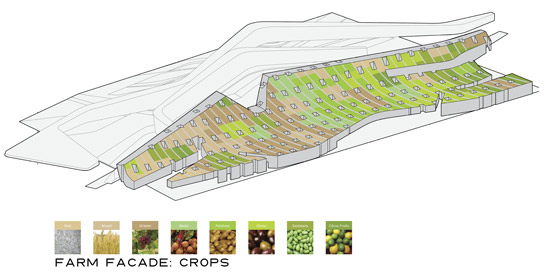 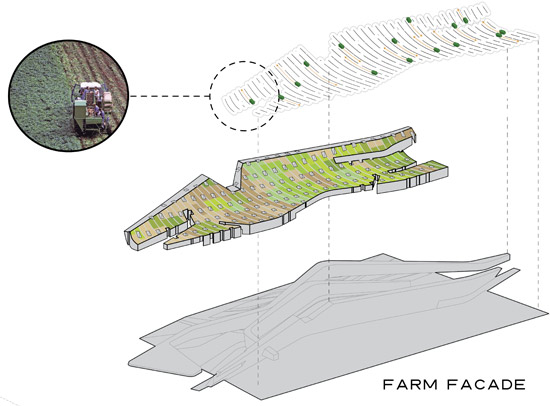 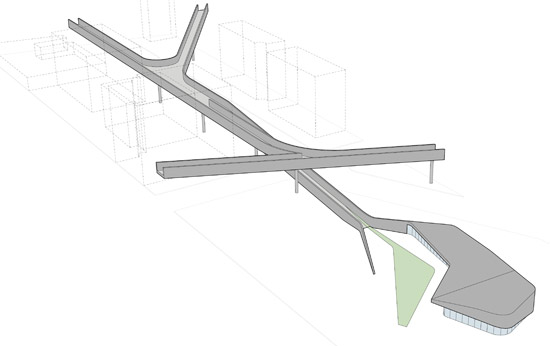 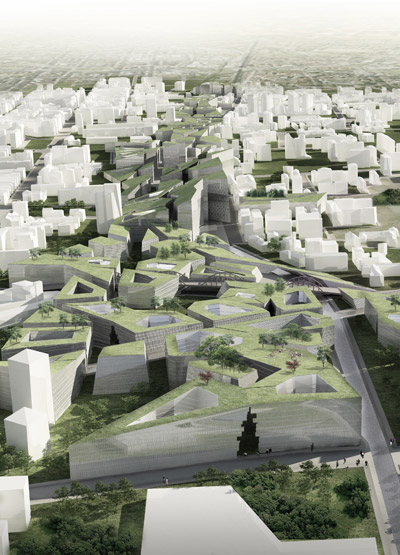