half of the people in milan live in areas with minimal recreational space that’s accessible 24/7. this forces people to move to other areas to seek out green space, which often overcrowds local parks. in the context of COVID-19, the following research by systematica highlights the importance of access to open-air gathering spaces and proposes how to adapt the urban environment for the changing social behavior after a health pandemic. 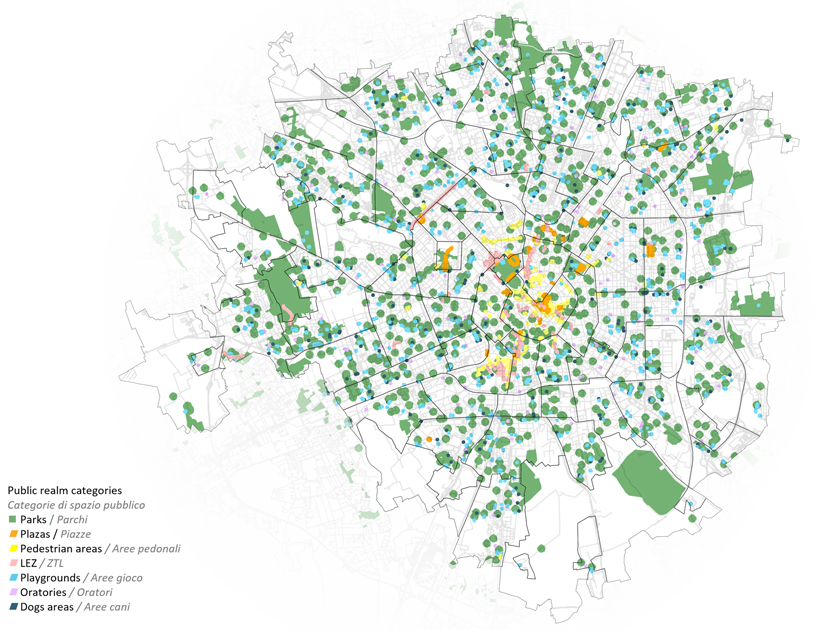 all images courtesy of systematica s.r.l.

the study follows an analytical approach aiming to address the transition of the city towards a wider and more homogeneous supply of public space. as it is now known, the current pandemic is affecting change in consolidated social behaviours, which resonates particularly in urban areas. indeed, it is precisely in such realities that the community can rediscover the importance of access to open-air gathering spaces and realize, in many circumstances, the lack of easily accessible public spaces on foot from home. systematica aims at supporting the evolution of urban planning by adopting analytical tools to quantify emerging needs and to outline targeted responses to these new collective requests. 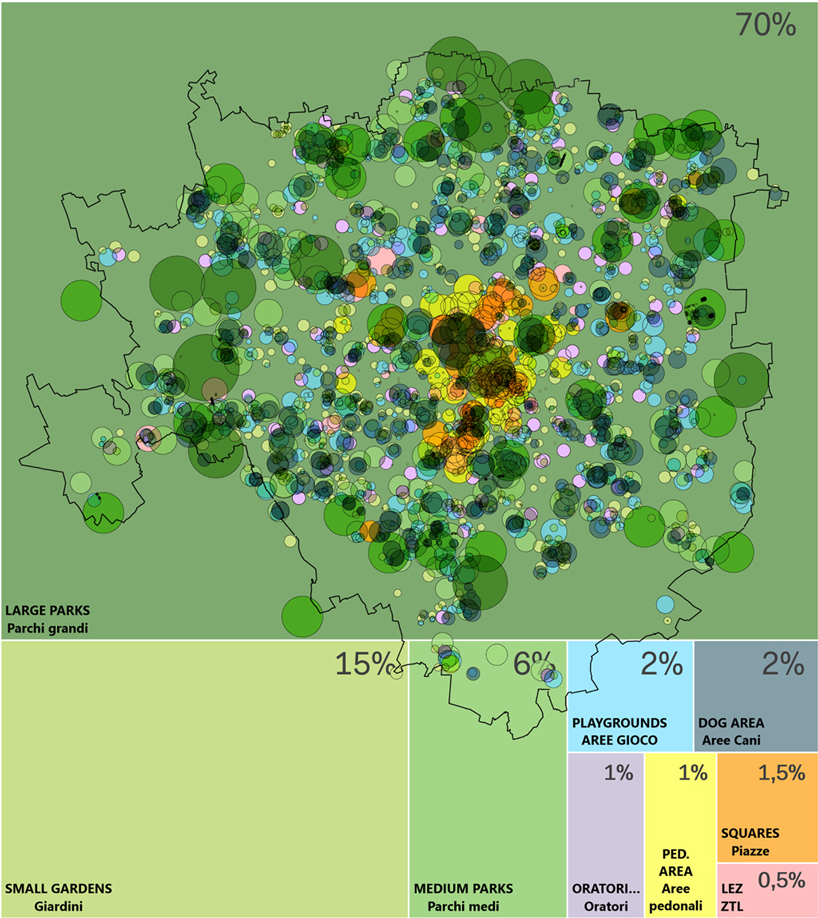 the study originates from a comprehensive survey of milan’s public space. data collected from official sources and platforms are integrated with ad-hoc research to create an atlas of the main categories of public spaces such as parks, gardens, dog areas, oratories, plazas and pedestrian areas. 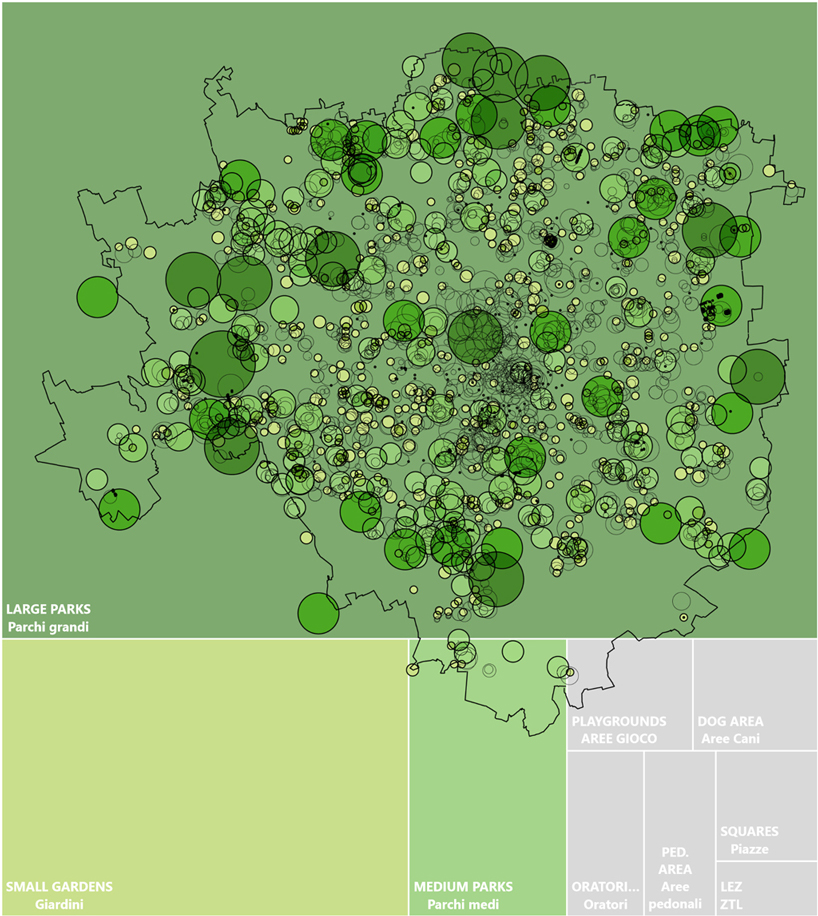 the overall extent of milan’s public realm reaches 21,000,000 m2. parks and gardens are predominant, occupying 11% of the municipal area. 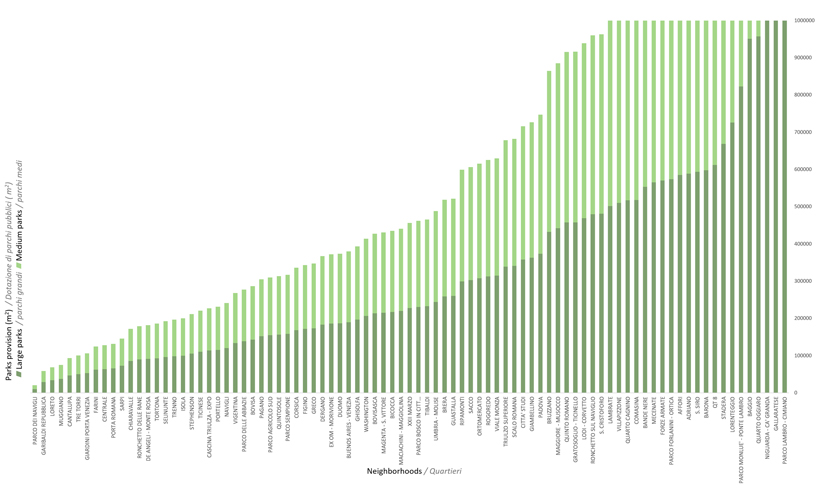 in light of what was inferred from the previous analysis, which highlights the predominance of green areas over other types of public space, the distribution of medium-large sized public parks and gardens per neighborhood is analyzed. 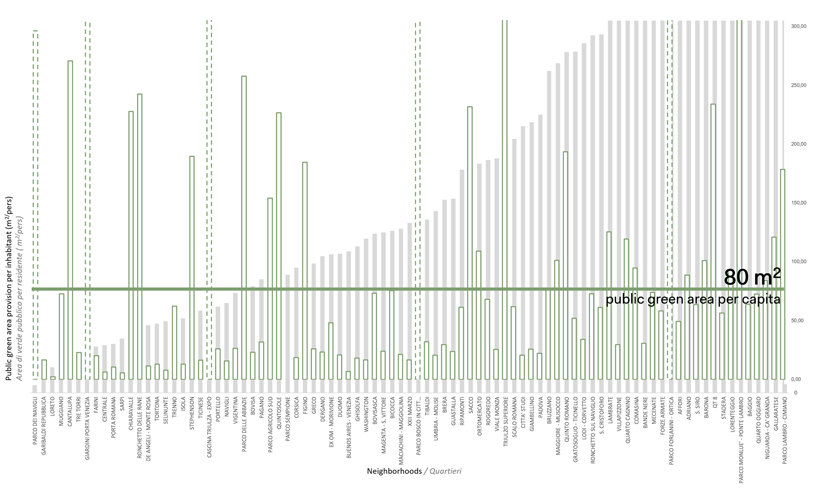 the relationship between the population of each neighborhood and the extent of the main public green areas available is equal to an average supply of 290 m2 per capita. if neighborhoods occupied by large urban parks are excluded (parco sempione, giardini di porta venezia, parco bosco in città, parco navigli, parco forlanini-ortica, cascina triulza-expo, etc.) this average is reduced to less than 80 m2 per person. 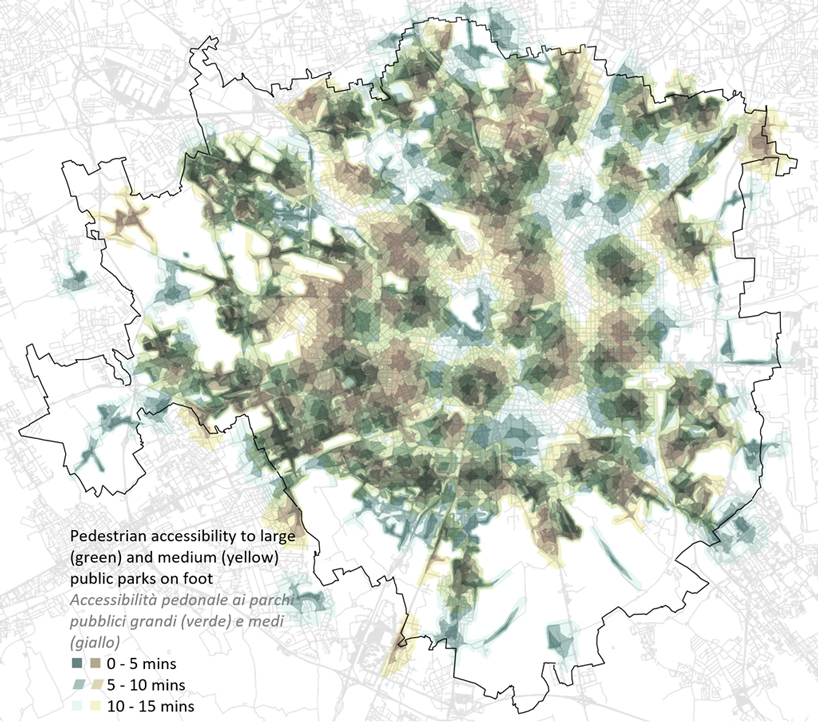 the isochronal analysis allows identifying urban areas whose residents live less than 15 minutes away on foot from a specific point. this reading of the city brings out the number of inhabitants able to reach a recreational area in less than 15 minutes and the urban areas least served. investigations show that the distribution of medium and large public parks leaves some areas of the city uncovered. the diffusion of other recreational areas reduces this deficiency by ensuring a widespread coverage of the city. nonetheless, the supply of these areas is reduced, resulting in 1.4 m2 per capita, on average. 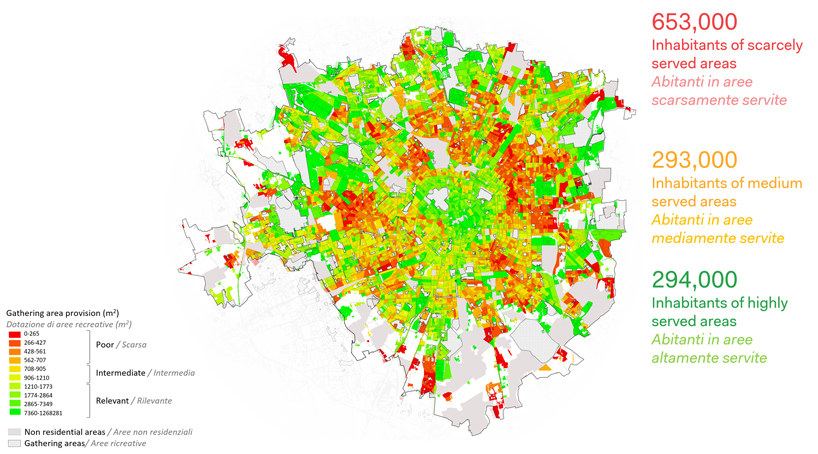 the map shows the detailed processing of the results obtained through the isochronal analysis. the analytical process starts with the public space provision within 15 minutes from each census cell. then, information about the residing population is analyzed. the methodology allows us to obtain a synthesized reading of the municipal area that compares the population density with the availability of recreational areas within 15 minutes from each census cell. the chromatic scale identifies the total amount of recreational areas available to each resident within 15 minutes. as shown on the map, more critical zones are located in proximity to the external ring-road, with episodic extensions along the north-east, south-east and west axial roads. 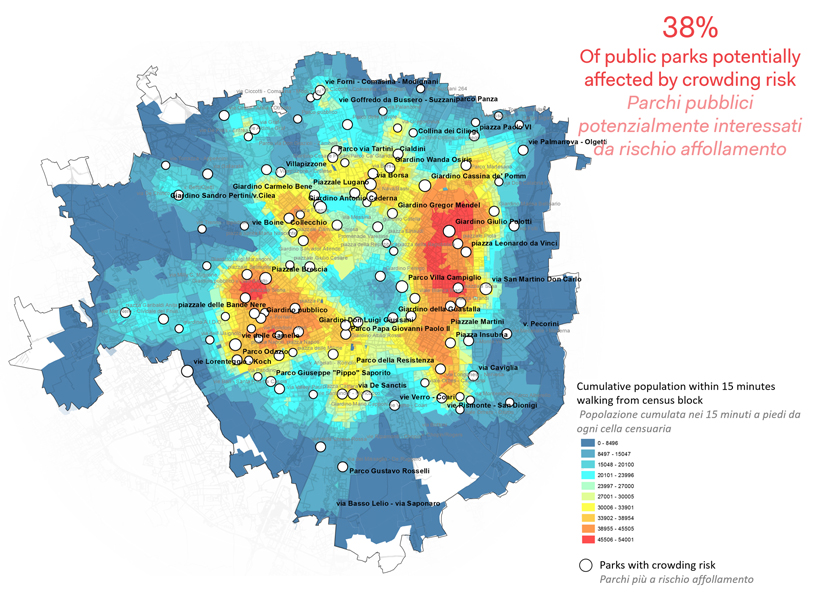 as highlighted through the survey of milan’s public realm, parks play the greatest role among all urban recreational areas. based on their size and proximity to residential areas, a map of crowding risk is produced. the exercise is carried out considering the area provision per resident within 15 minutes from each park. green areas providing less than 2 m2 per resident are considered potentially affected by crowding risk.

the spread of the COVID-19 pandemic has placed the provision of public spaces in urban areas at the center of the global debate. in milan, as in many other metropolitan areas, informal uses of public spaces have been reported. a careful reading of these habits cannot fail to consider them as a silent expression of the time-tested needs of the community. since the 70s, the pioneering contributions of urban planning and environmental psychology scholars brought to light physical traces of informal collective behaviors as expressions of needs extrinsic to planning tools. the current situation requires careful study investigating new forms of reclaiming the public realm.

the conclusion of the study intends to provide preliminary guidelines for a homogenization of the public realm across the municipal territory with the ambition to contribute to the development of a structured and suitable response to the social developments underway. finally, a selection of actions taken on the global scale to expand existing public realm are considered.

the analytical process leads to the identification of some urban areas with less widespread and less extensive availability of public spaces in relation to the residing population. the map groups these areas into 8 main zones affecting 25 milanese neighborhoods. for each of them an increase in public areas is suggested based on the intermediate urban provision. the increase reflects the possibility of citizens to have a total amount of 1,000 m2 of public space within 15 minutes from their residence. this value would bring the areas concerned closer to the public space provision level currently present in the southern area of the city (porta lodovica, porta ticinese, porta vigentina). 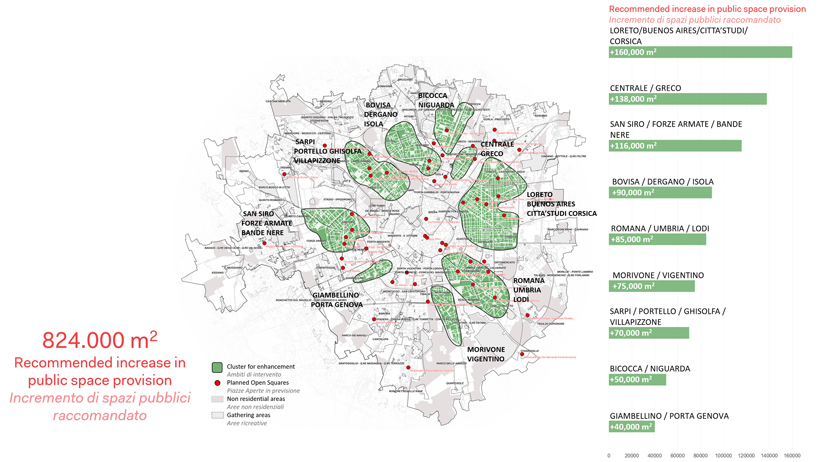 among the proposed interventions aimed at increasing public space, the capillary local roads network, green in the map, can play a crucial role. the quota of local roads potentially closed to vehicle traffic are reported in red. this strategy can be implemented temporarily during the pandemic spread or occasionally during weekends to ensure the enhanced provision of secure public spaces where needed. some of these transformations can hopefully become permanent in order to give a balanced accessibility to public realm to residents. 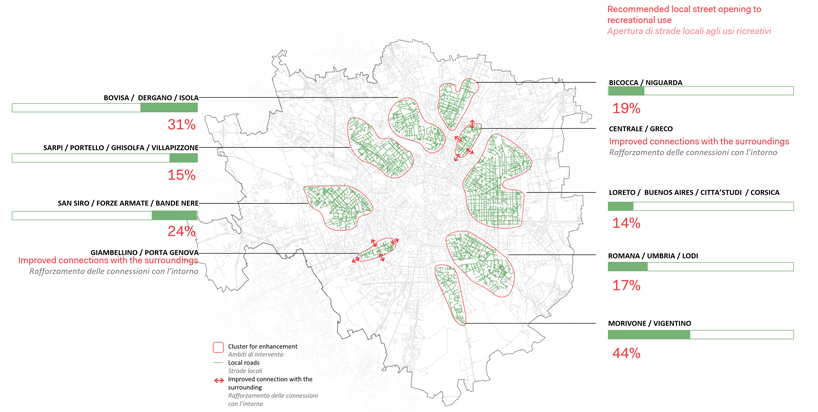 name: access to green areas and public realm: the case of milan