japanese architect tadao ando introduces the world class concert pianist lang lang first high class members club – designed by a group of four designers of metis design agency based in guangzhou, china. situated beneath the zhengjia shopping center in the tianhe district of guangzhou, the ‘lang lang club’ is a contemporary night club combining various styles and themes to cohesively conceive the eclectic night club design. this is demonstrated by the distinct philosophy the agency has worked by – fusing the traditional chinese ‘ling nan’ aesthetic with the western world – creating a mixture of a modern and classic elements. 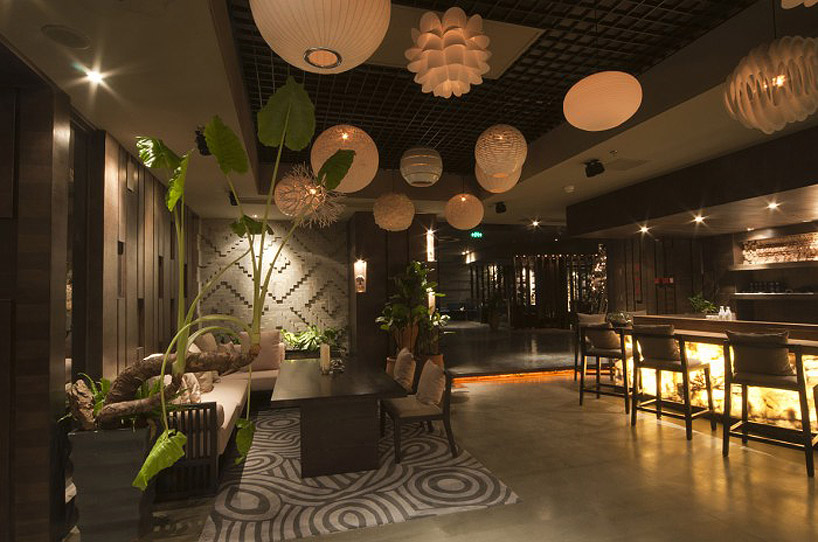 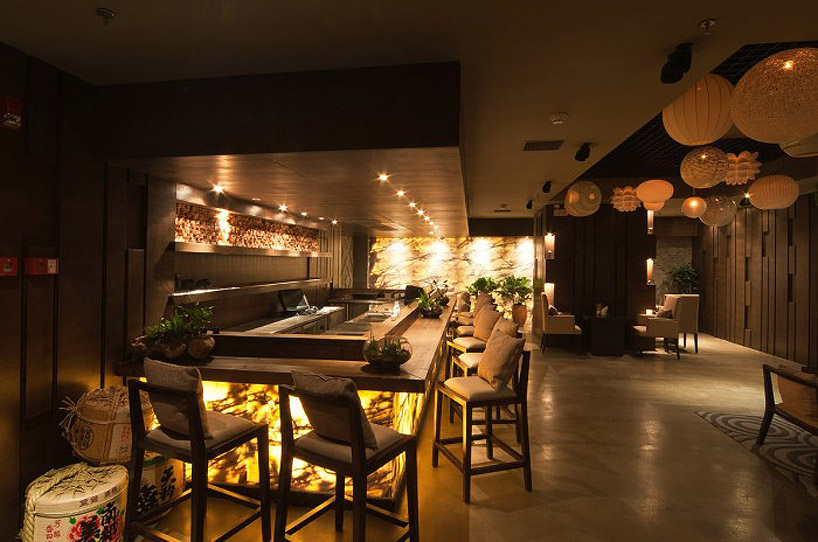 the design of ‘sushi bar was stimulated by ‘fisherman’s song at dusk’ – a part of a poem by wang bo – a famous poet from the tang dynasty. it describes a scene in which fishermen return home with foison at dusk, the faint light coming out of the marble stone implies sunset. the chopsticks on the shelf are an installation art piece emphasizing the food culture, and the plants placed around the space gives a sense of the nature – closely related to the theme. 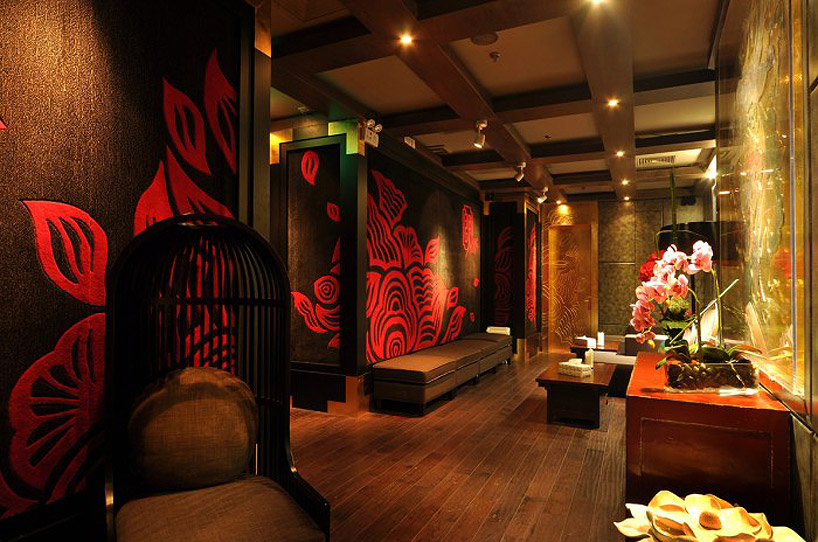 the theme of the ‘yue VIP room’ is closely related to the root of lingnan culture, which was largely influenced by ancient nan yue kingdom civilization. to reify a yue king space, the room has employed red color as the main tone, which implies passion, strength and power. the graphic on the wallhanging evolves from the look of a peony, the flower symbolizing prosperity and noble. 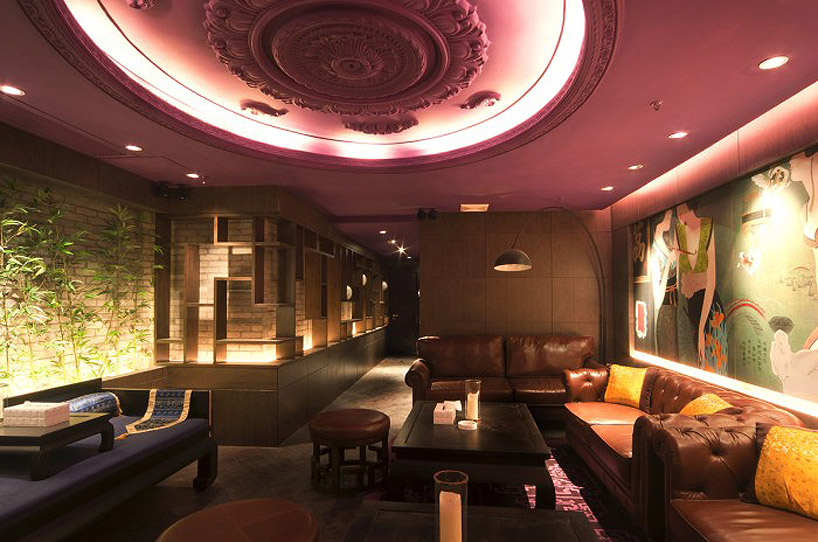 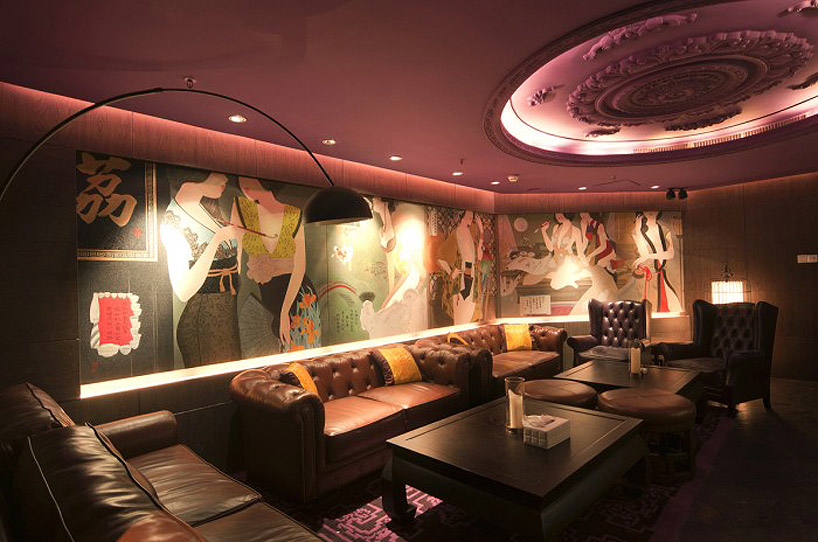 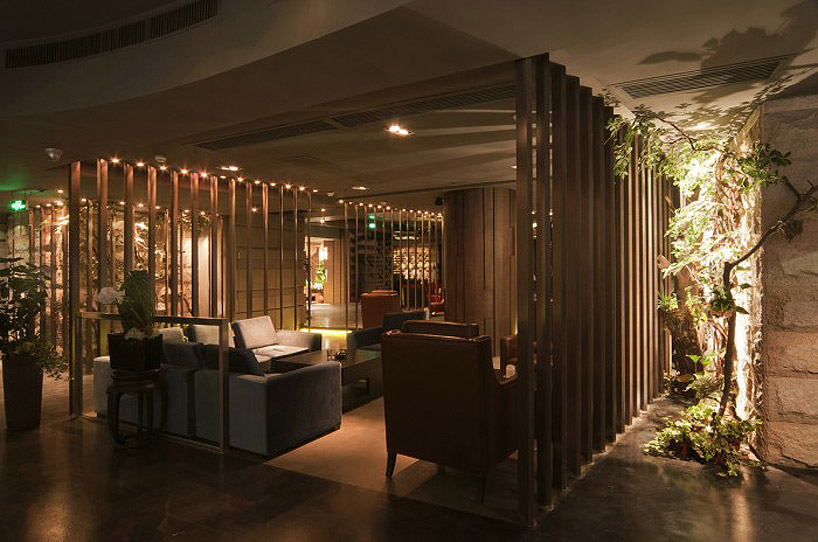 ‘the box’ is the conjunctional area between the lounge and the main bar. walking past ‘the box’, you can only see the greenery behind the louver from one direction, but not from the other – creating a  little visual game to keep visitors interested from seeing regular scenes. 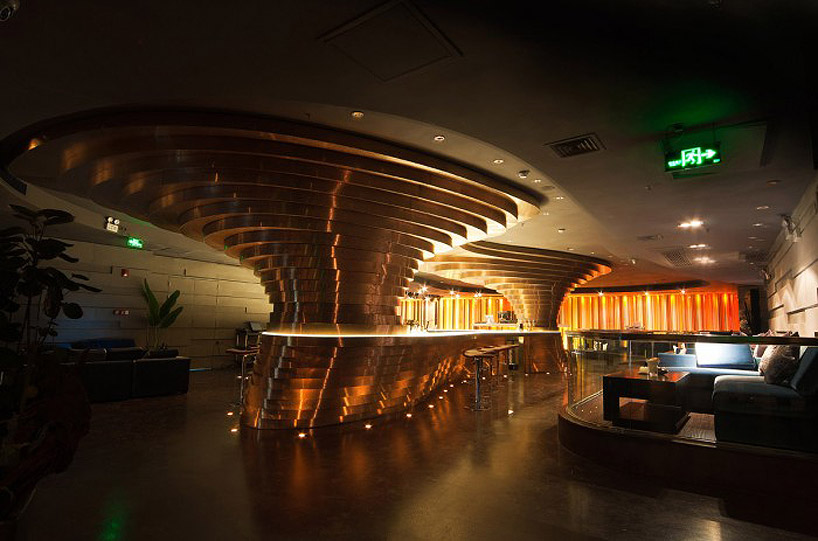 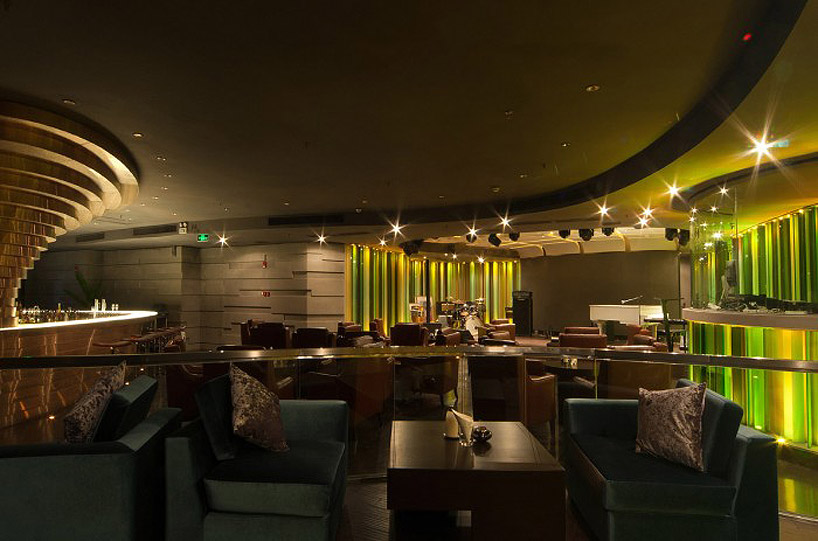 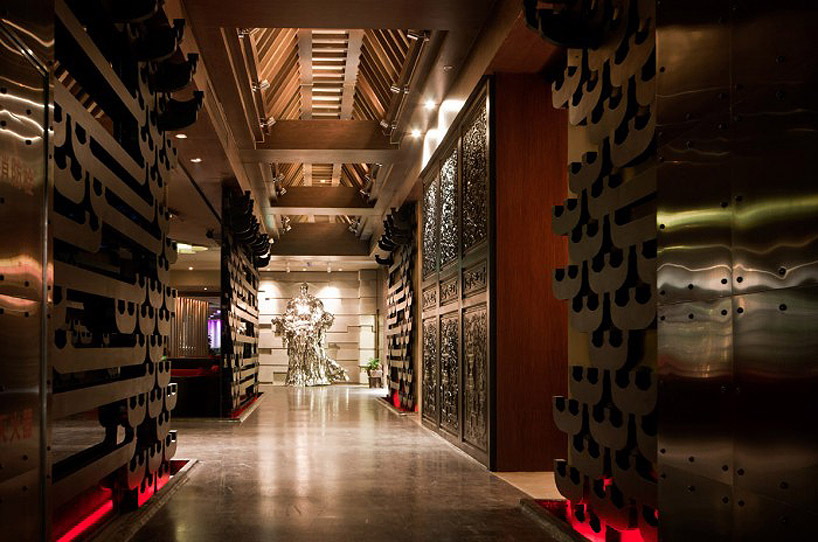 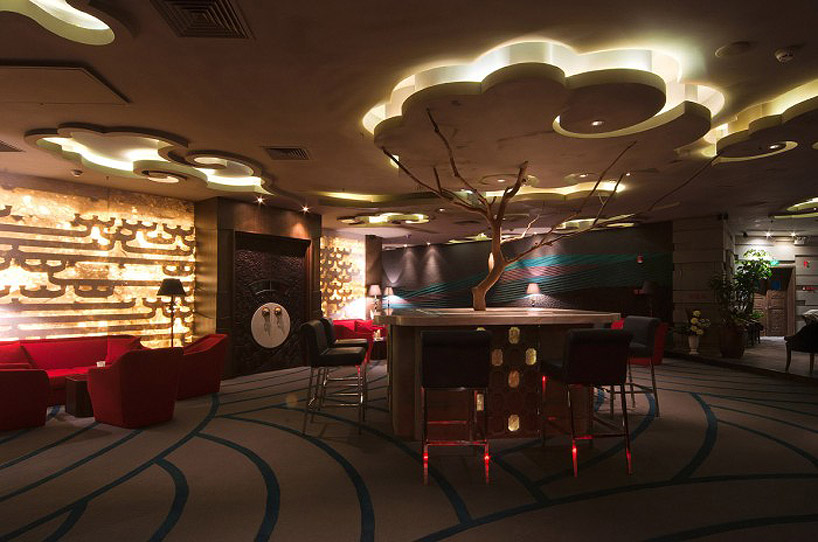 to the left hand side of the corridor, is the ‘whisky bar’. its design is based on the theme of ‘autumn moon casting on the calm lake’, a famous chinese scenery located at the west lake of hangzhou. the concepts of natural elements such as sky and land, mountain and water, are manifested through the design of the cloud shaped ceiling, the mountain like patterns on the wallhanging, the branch of the tree in the middle of the bar, as well as the sea wave like graphics on the carpet. there are clouds above, with trees, mountains, and water surrounding. graphics of dou gong elevation have been applied as a decoration on the stone wall surface besides the ‘yue VIP’ door. the element of dou gong has been adopted for decoration at places of the club, and it becomes an emphasis on the chinese element of the design. 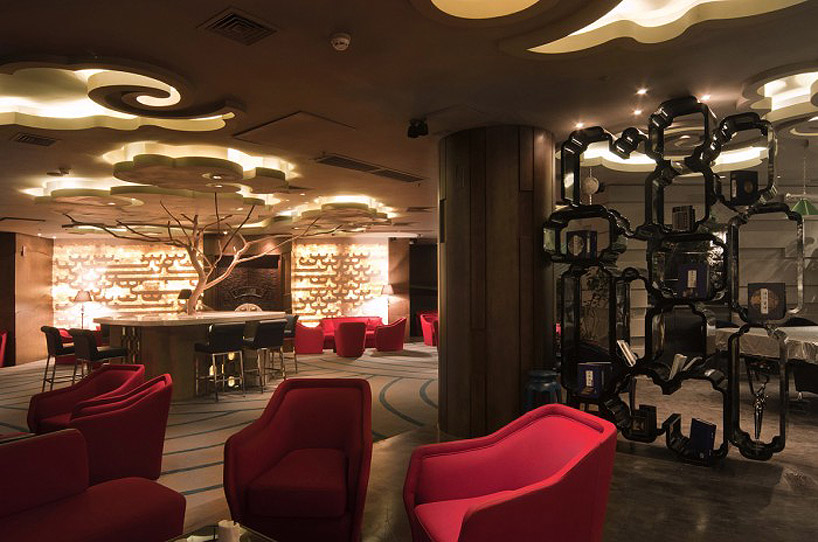 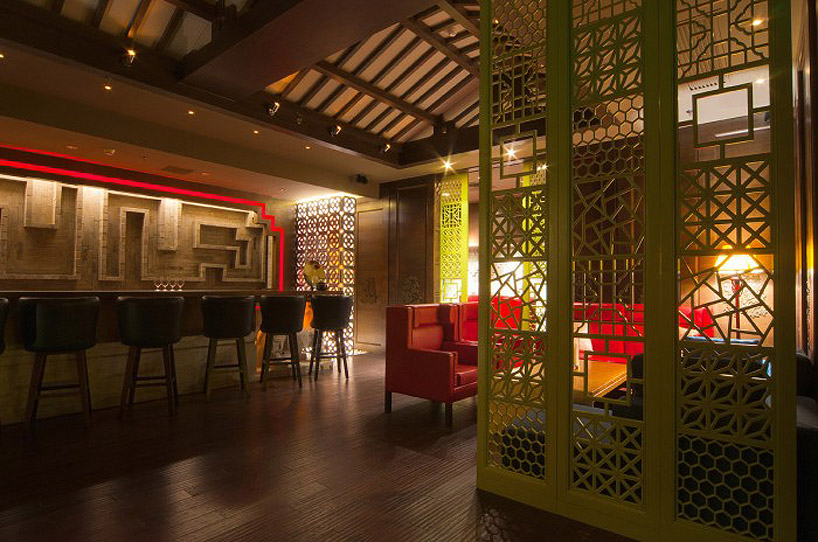 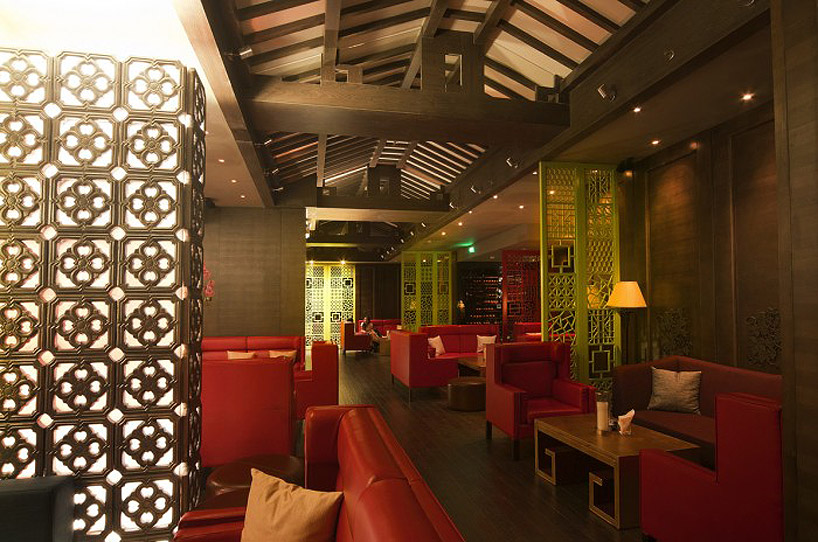 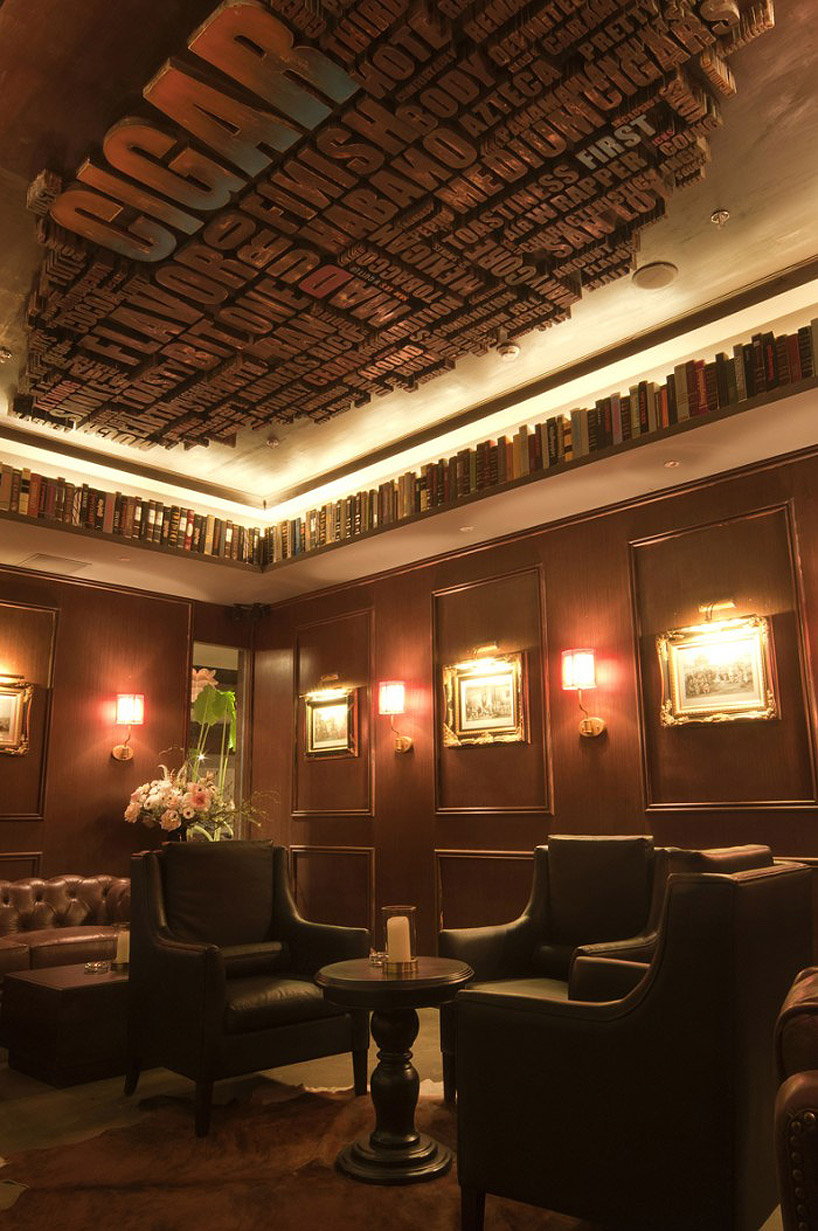 the ‘cigar bar’ is located between the ‘red wine bar’ and ‘sushi bar’. the cigar oirginates from western world, so this space is designed to be a western fumoir atmosphere. the sofas are chesterfield and the ceiling is informed by typography with all the words aligned related to the subject of cigar. this puts an accent on the theme of the cigar bar, and at the same time, on a western style.

the dark colored classical english book decoration below the ceiling also references the cigar, with the side look of the book with gold color letters and lines suggests the look of a cigar. it also implies a sentiment for the old time english library where a smoking space was attached. the fully paneled wall gives a sense of american victorian style- this kind of wall was popular among the ‘well-to-do’ in the late 19th century. the drawings along the wall are work by the victorian english architect/artist, thomas allom (1804-1872). these are scenes of old guangzhou in qing dynasty. 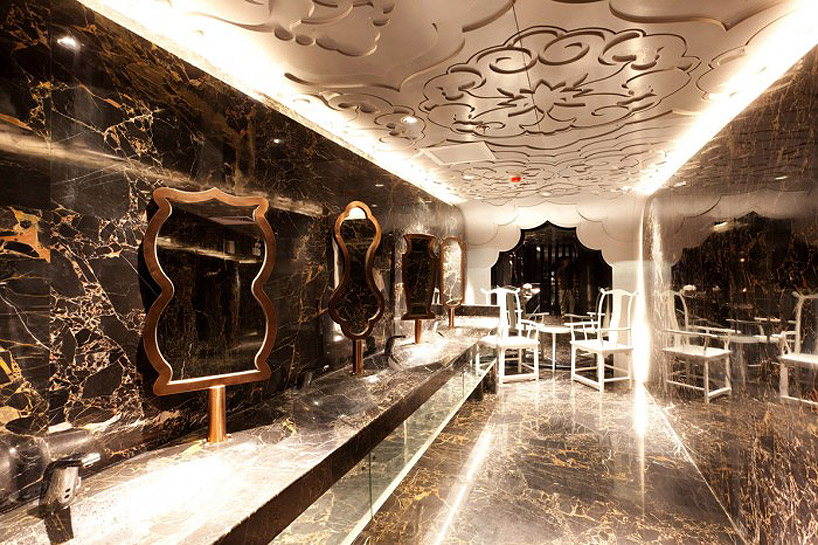 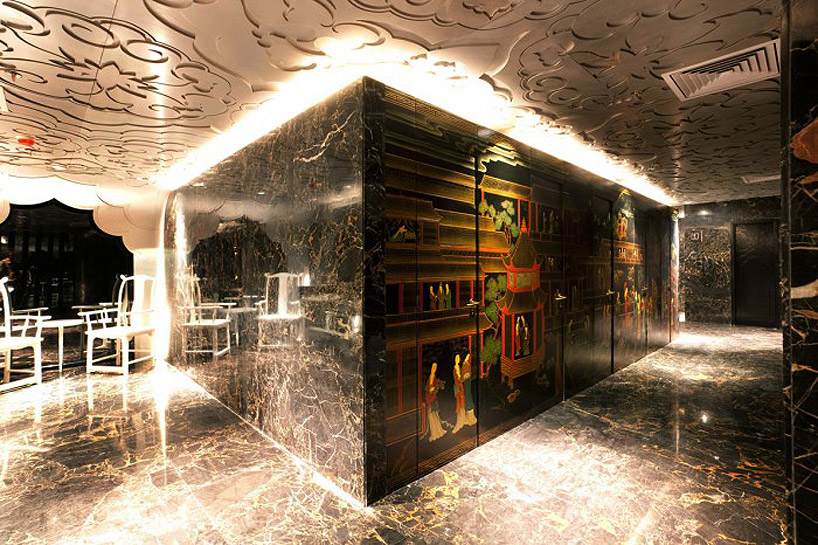 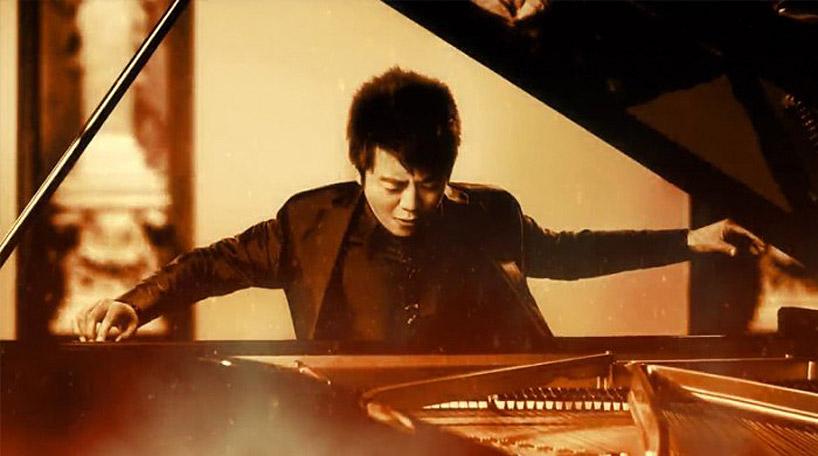 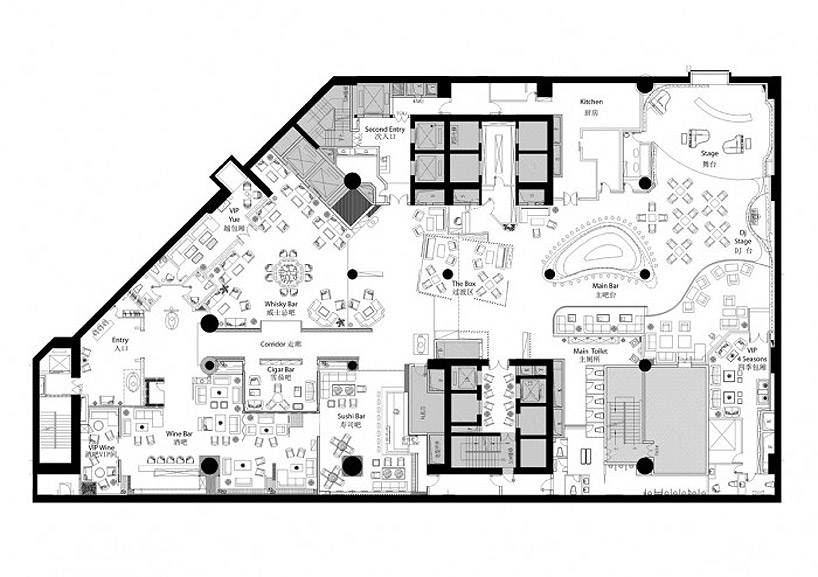 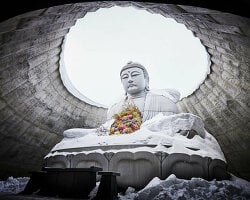