self-taught architect tadao ando set up his own practice in 1969. since then, he has completed over 200 buildings and was awarded the pritzker architecture prize in 1995. on the occasion of its 5th anniversary, PORT magazine visited the architect’s studio in osaka, which was originally intended as a residence, and discusses the key principles that typify the 74-year-old’s acclaimed work. ‘the real importance of architecture is its ability to move people’s hearts deeply,’ ando says. ‘I am always trying to establish spaces where people can gather and interact with one another.’ 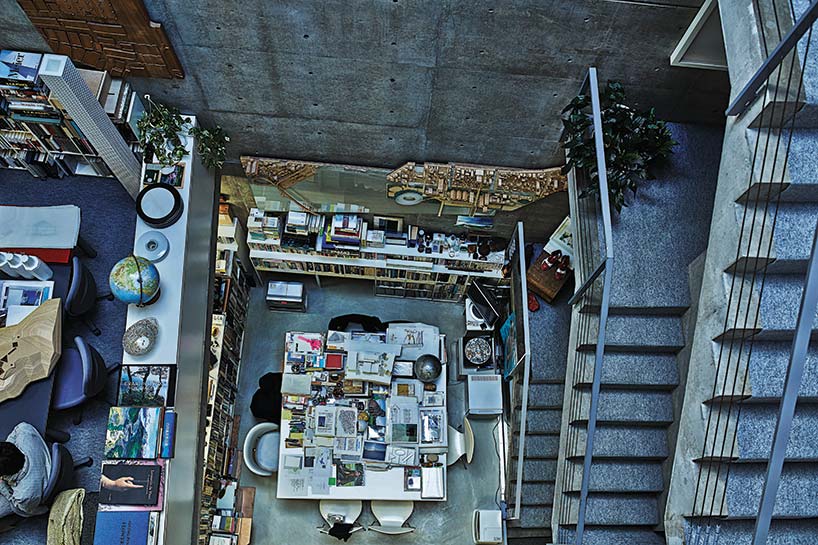 all images by kaita takemura

ando originally designed the building that houses his studio as a home for a young family. as it neared completion, the clients discovered they were expecting twins and the architect realized it would be too small for their needs. the studio was then extended three times, before it was rebuilt in 1991 to accommodate his own expanding team. the space features ando’s trademark smooth concrete surfaces with carefully positioned apertures that channel natural light. 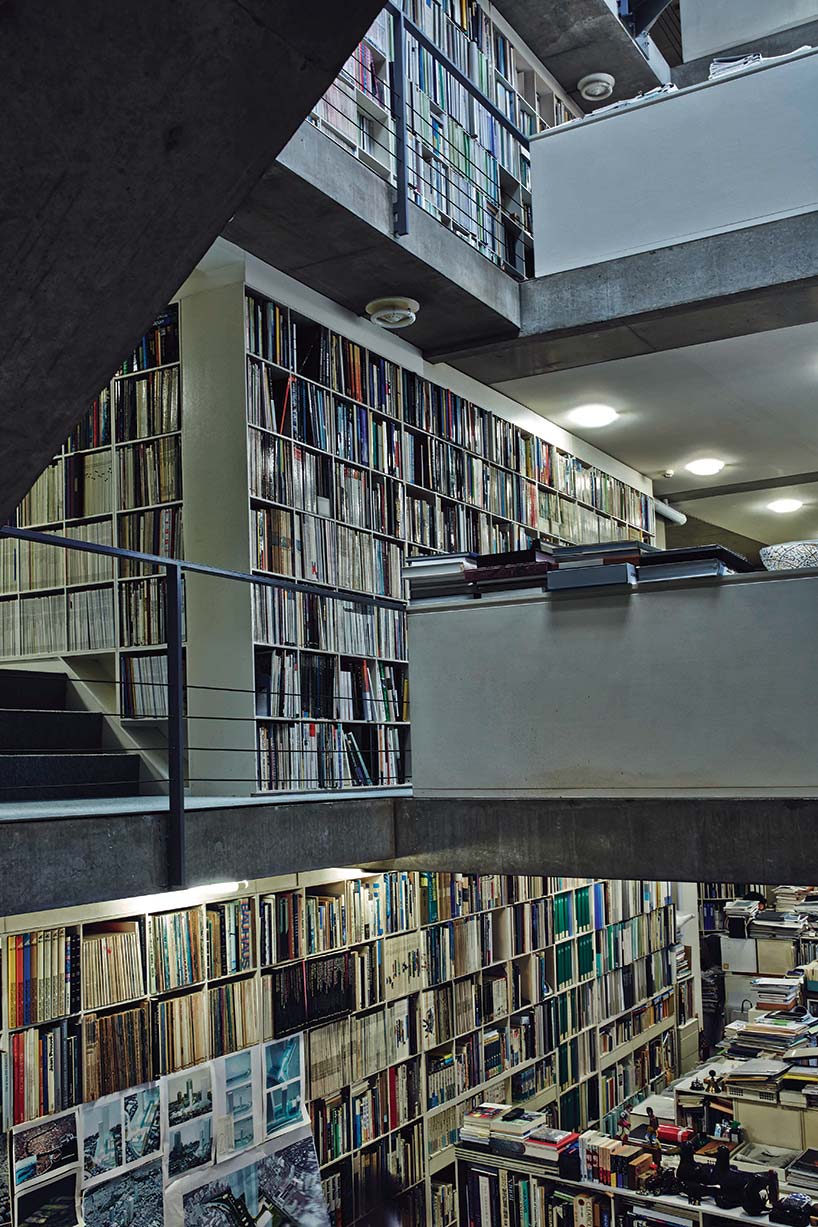 walls throughout the building accommodate shelves filled with books and magazines

in an interview with alyn griffiths, tadao ando explains his working processes, the state of architecture as a profession today, and the contemporary artists he most admires. read an excerpt from the interview below, and the full feature published in PORT magazine’s latest issue.

alyn griffiths: your buildings are often distinguished by their pure geometric forms and use of exposed concrete. how are you able to achieve such a human quality in your architecture using very basic shapes and materials?

tadao ando: my intention is to create a specific space that does not exist autonomously of its site, using common materials that we can find anywhere in the world, like concrete, which consists of sand, stone and cement. I believe that the emotional power in architecture comes from how we introduce natural elements into the architectural space. therefore, rather than making elaborate forms, I choose simple geometries to draw delicate yet dramatic plays of light and shadow in space. 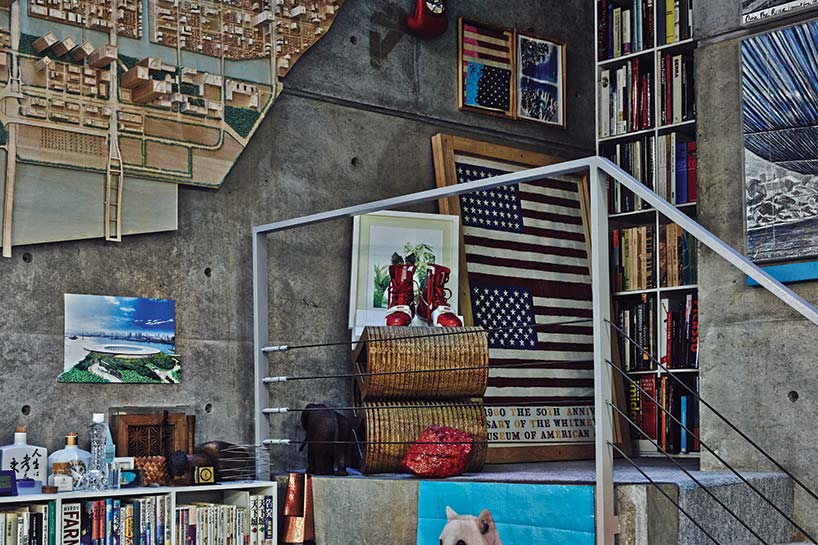 AG: how would you describe the state of the architecture profession today? in comparison to other periods you’ve witnessed during your career, is this a better or worse time to be an architect?

TA: I personally feel that society today does not need as many architects as [it did] in the 19th and 20th centuries, especially in developed countries. I kept believing that architects have a role to play in realising places that can be a cornerstone and a compass in everyone’s hearts. but in recent years, due to pressures from the economy, the scale and speed of development have significantly increased all over the world, resulting in the decline of the social role of architects. however, even in such a difficult time, I wish to provide the origin and home of people’s hearts as an architect. 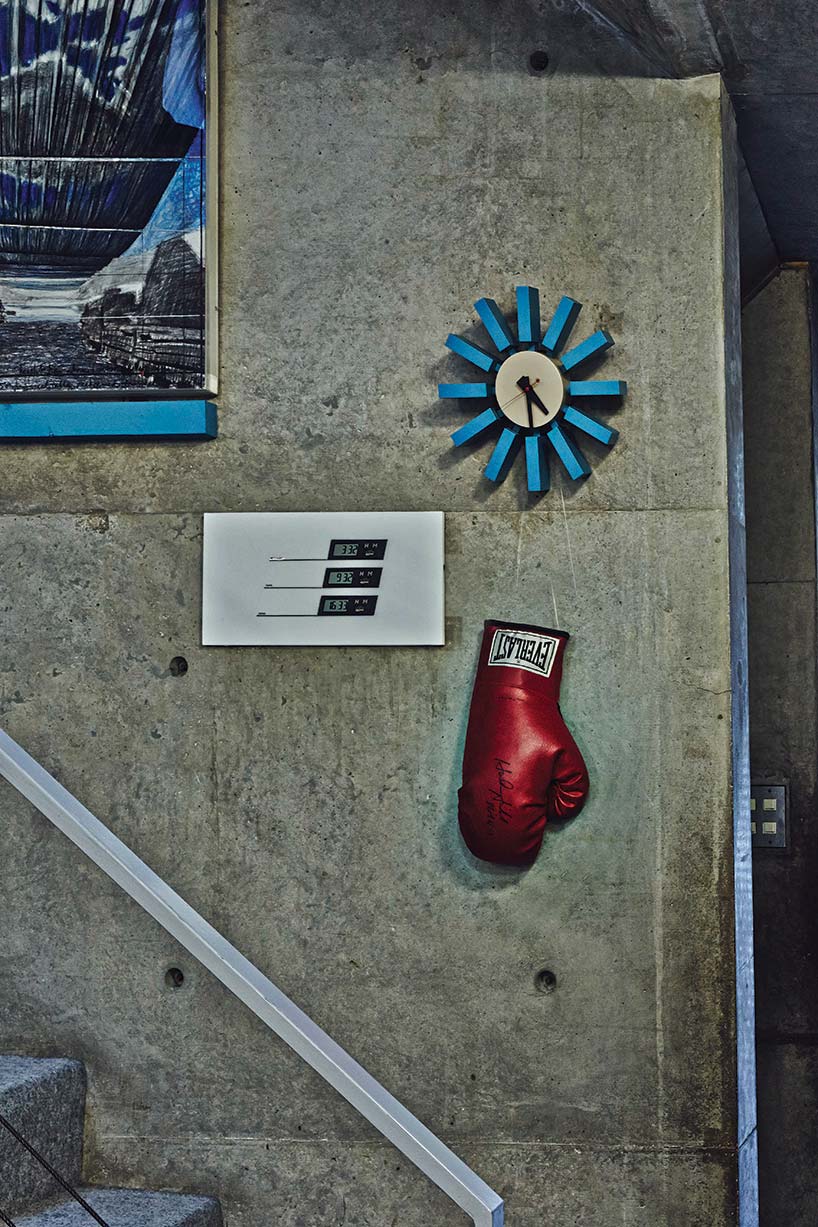 AG: aside from the work of the great architects you admire, where else do you look for inspiration?

TA: the inspiration to envision new architecture can be found anywhere, such as in a sentence or even a word in a novel I am reading, in a scene within a film, or in memories of my travel to caves in india or ancient ruins. as long as we open our mind all the time, we can find the inspirational keys to new creation. throughout my career, I have been fortunate to work with many influential artists as clients, coworkers and friends. I have been commissioned for several projects by fashion designers such as issey miyake, giorgio armani and tom ford. I have also kept in touch with outstanding contemporary artists with whom I collaborated, including damien hirst, ellsworth kelly and richard serra. their aesthetics and distinctive eyes always deeply inspire and motivate me to create. 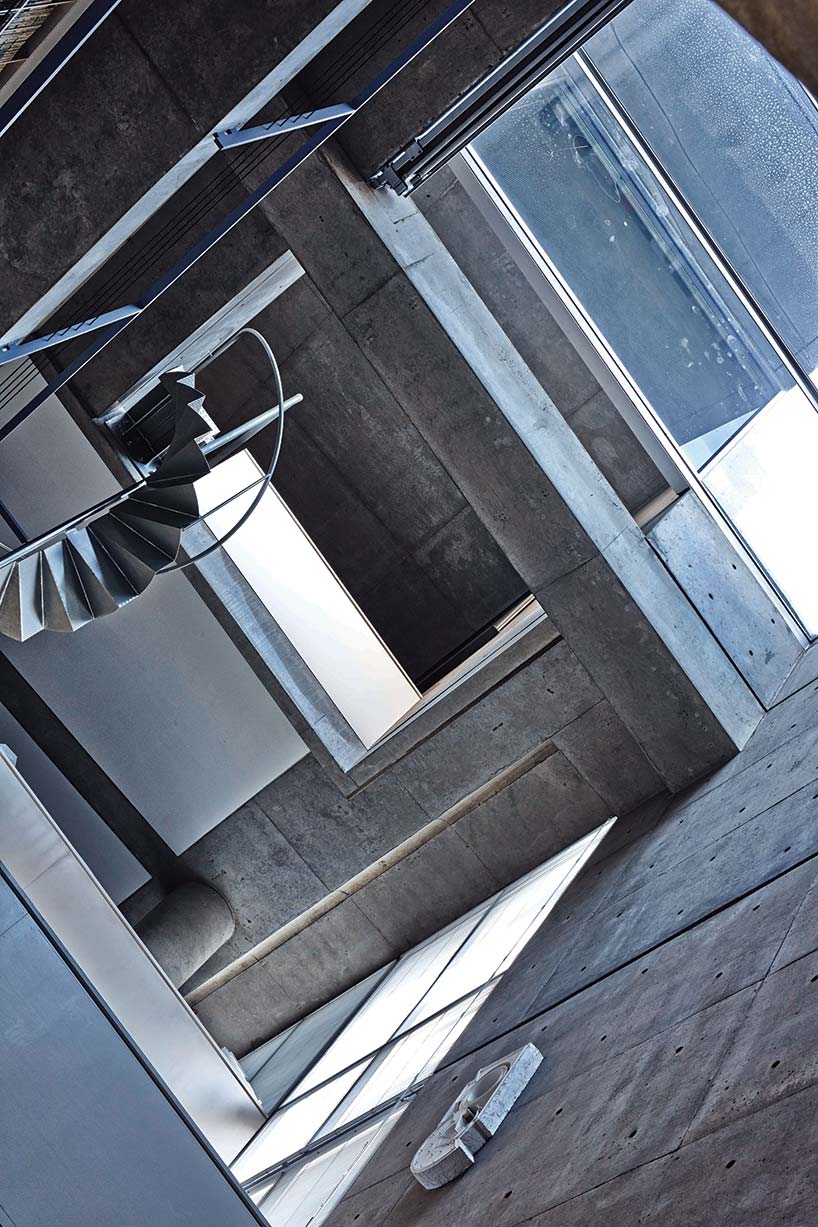 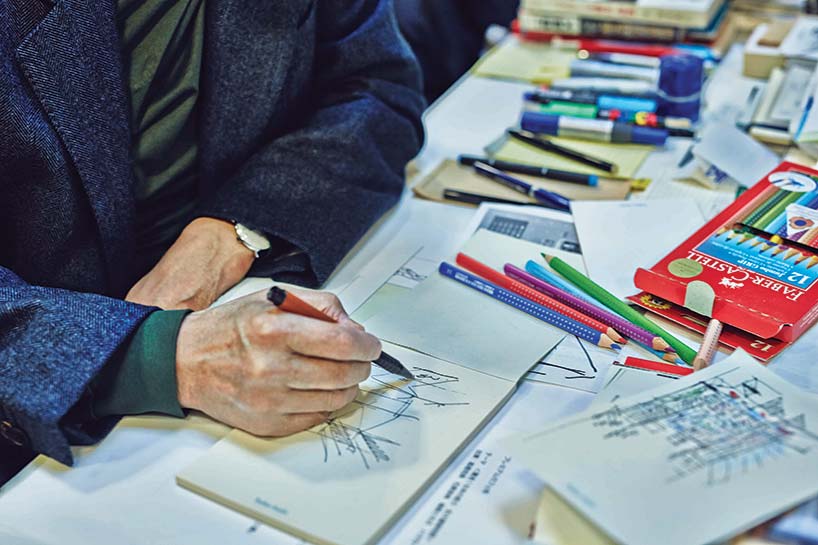 ando sketches the interior of his studio on a personalised notepad 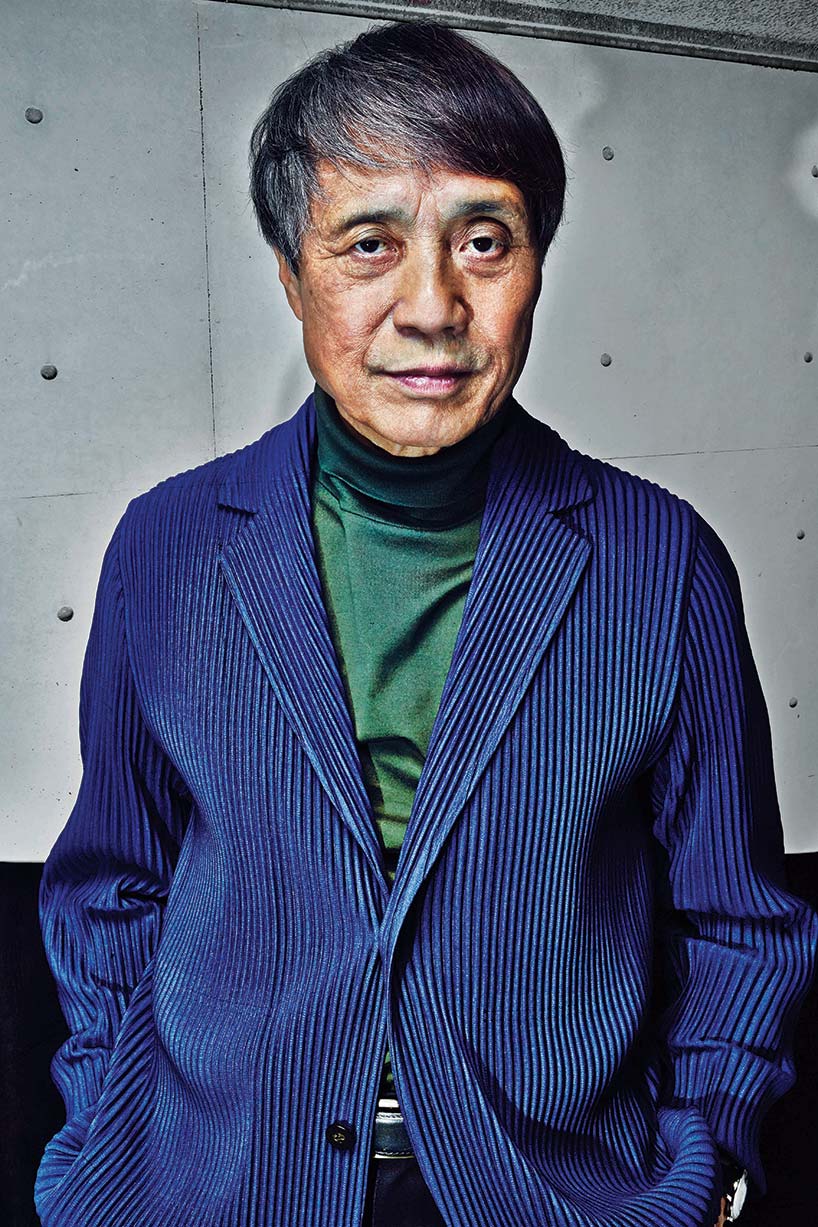 portrait of tadao ando inside his self-built studio 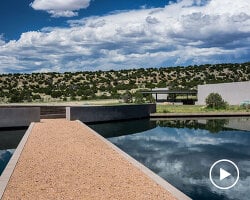