amsterdam, new york, dhaka, shanghai, manila, bangkok and venice — cities that have developed their own cultures in symbiosis with the sea’s resources are in danger of being submerged by rising sea levels due to climate change. will these cities perish and have to be relocated to higher ground?

in light of that possible future, takenaka corporation has proposed ‘the bridge/the village’ — a residential complex and observatory wedged along the japanese coastline where global environmental changes are most visible. here, a decarbonized, zero-water, and zero-energy lifestyle can be achieved by observing and using the earth’s resources. the team explains: ‘it is a proposal for a sustainable future village that restores the power of life by activating the circulation of resources between land and sea, developing and strengthening people’s life skills and the indigenous culture of the land.’ 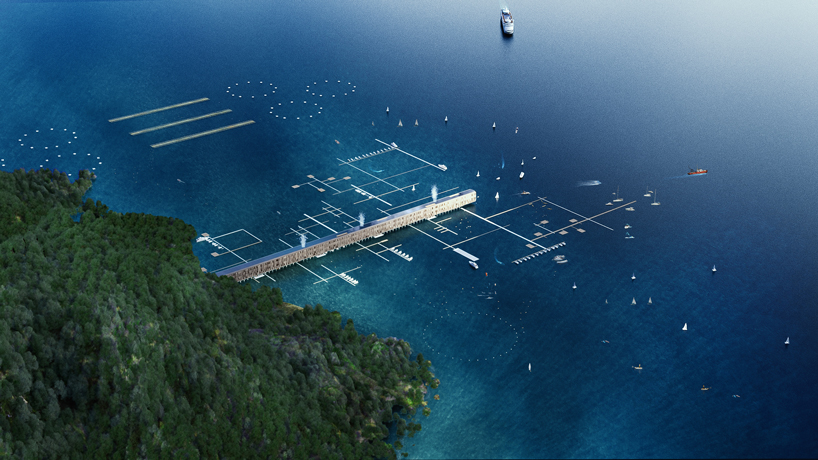 a linear, residential complex fitted with an earth observatory

takenaka corporation (see more here) modeled ‘the bridge/the village’ based on fishing settlements clustered around japan’s seto inland sea. as a result, the architecture suggests a linear complex with a spectacular view of the pacific ocean; it holds residential units, a hotel, a restaurant, a vegetable and seafood market, and a woodworking workshop.

the team also proposed installing fish farms, fishing ponds, and bathing beaches on the seaside, while populating the mountainside with rice fields, wooded areas, and camping sites — creating a circulation hub for sea and mountain resources. as for access, an in-land road stretches to the edge of the building, creating a 1km long walkway. 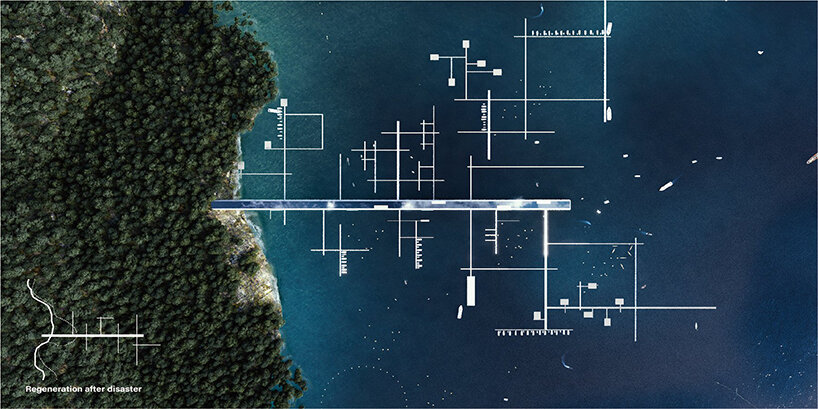 finally, installed at the tip of the walkway is an earth observatory designed to share data with other countries by observing, recording, and transmitting changes in global climate. shaped like a four-story atrium called ‘the room’, this part of ‘the bridge/the village’ features wings powered by natural energy and a board filled with filtered water.

the architects write: ‘it is a place that embodies zero-energy, zero-water resource circulation. it is a special place where one can experience the happiness of the relationship between nature and man through the ever-changing light, steam, clouds and the sea, temperature, wind, humidity, and sound.’ 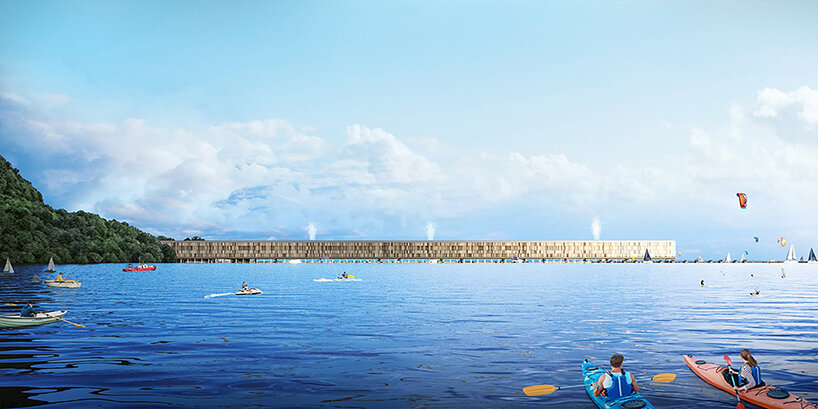 structurally, the building envelope is covered with bamboo ‘wings’ that have selectable modes such as solar control, thermal storage, photovoltaics, and wind power. users can select the modes according to the current requirements. takenaka also plans on adding solar panels to the envelope’s flat side and an ETFE membrane on its curved side. this multifunctional skeleton ultimately becomes a dynamic volume that can absorb external disturbances. as a poetic touch, and borrowing the traditional japanese lantern technique, the envelope lights up at evening time to create a golden and shimmering strip along the ocean.

more importantly, and aesthetics aside, the structure can withstand tsunamis and typhoons at the highest level. additionally, the deck, the outdoor space, and all indoor material will be maintained and renewed using resources from the land. 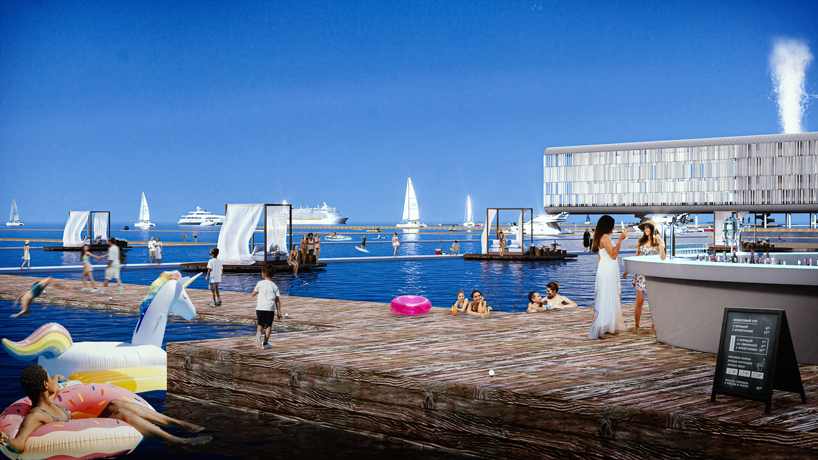 at the ecosystem level, fresh air will be regularly pumped into the floating foundation ‘like a champagne tower turned upside down’ to increase the dissolved oxygen concentration at the sea surface. a water treatment system is also incorporated for purification, collecting water quality data from the observatory mineral supply, controlling the biological activity of photosynthetic phytoplankton, and fixing atmospheric CO2 levels in seawater. 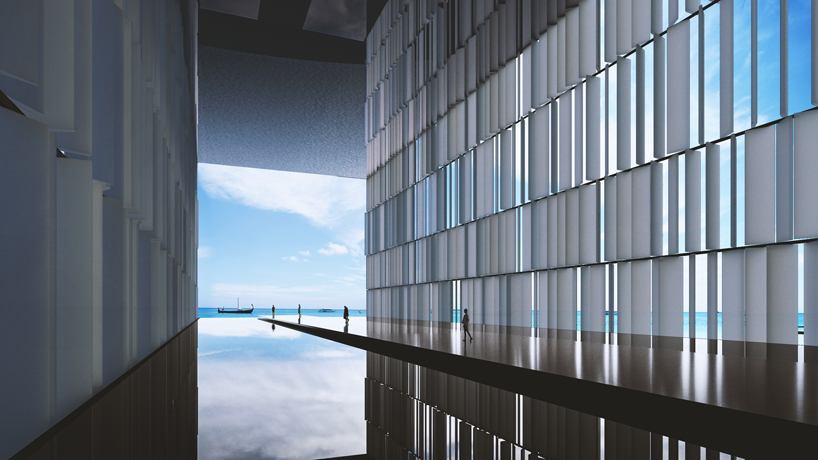 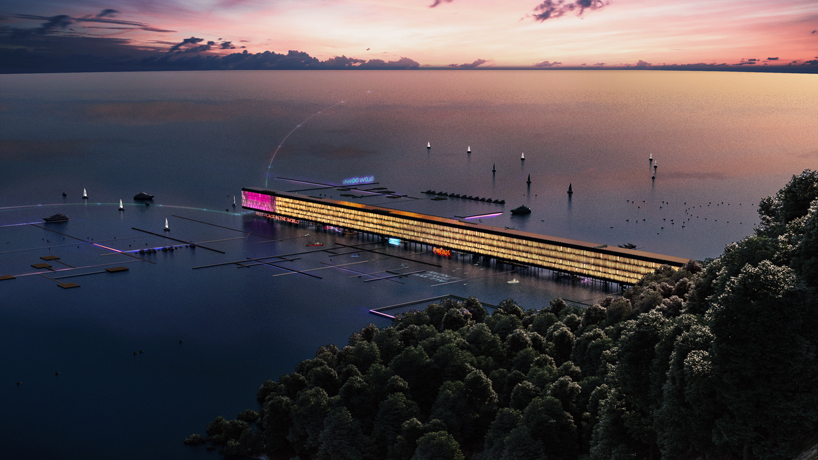 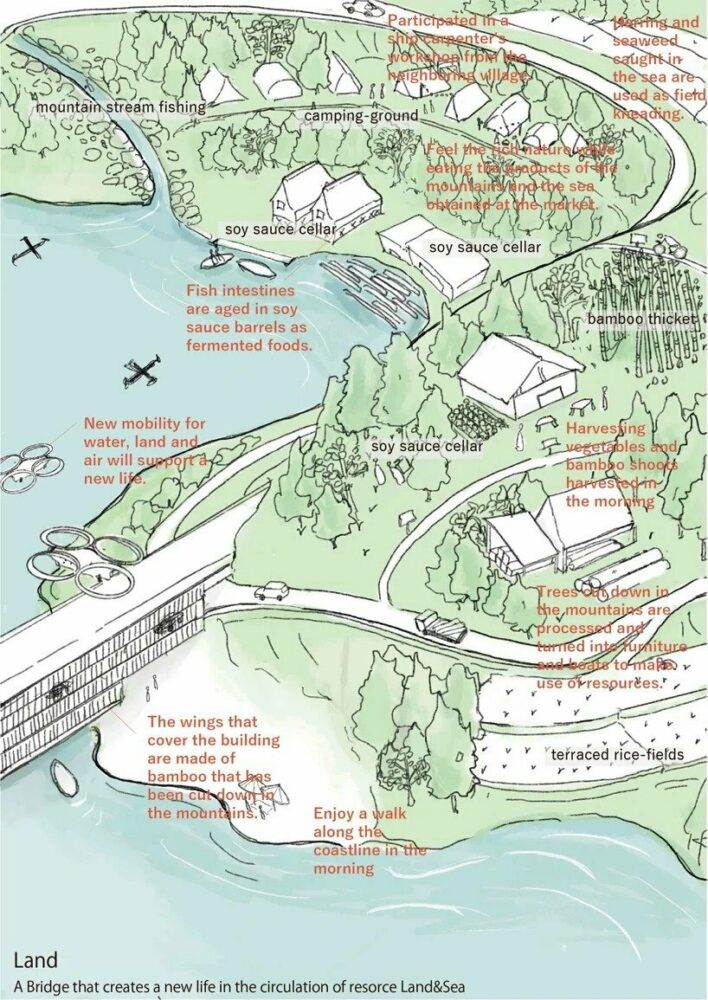 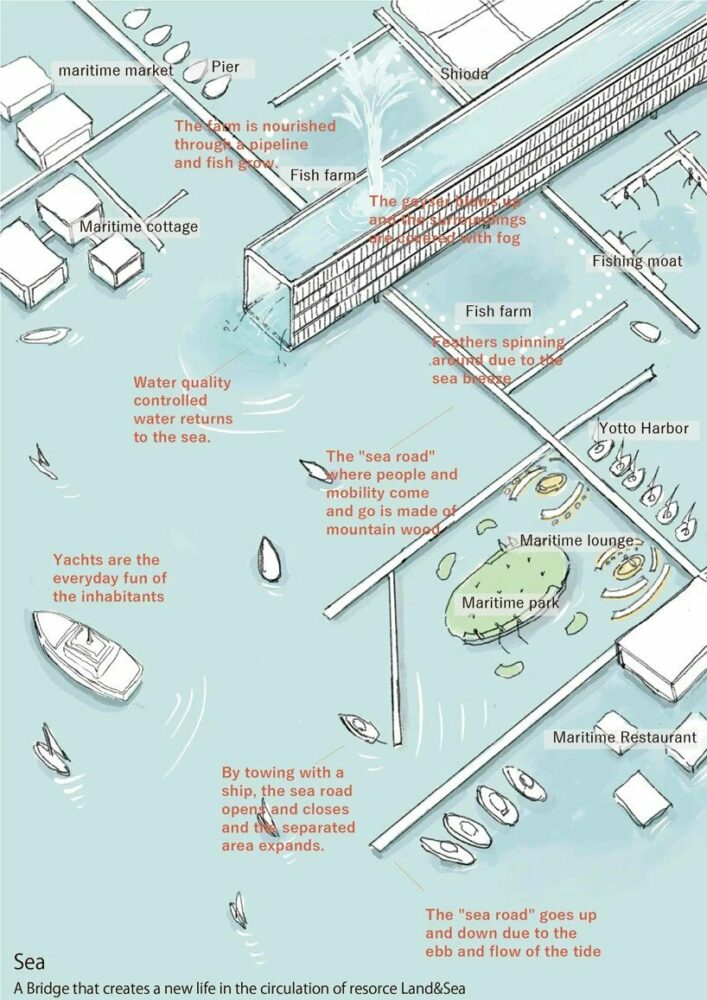 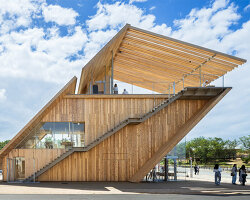 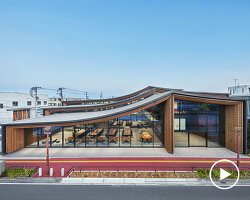 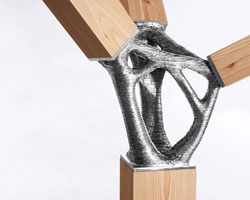 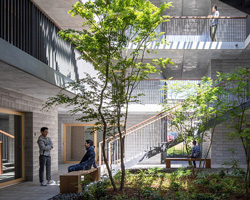 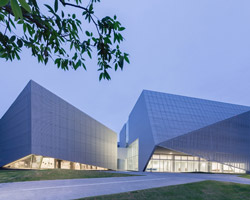 Dec 31, 2018
this transparent showroom in japan is surrounded by an artificial pond 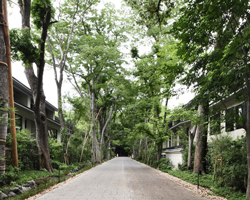 Nov 01, 2017
takenaka group designs a japanese-style housing next to a world heritage site in kyoto