in development since 1999, herzog & de meuron’s tenerife arts space (TEA) has officially opened in santa cruz de tenerife in the canary islands along a ravine, the baranco de santos. the 21,000 square metre complex is connected to its surrounding environment by a pedestrian walkway which descends through the building, down to the barranco route, widening at midpoint to form a triangular-shaped plaza.

TEA is made up of two floors which are connected to the main entrance by a winding staircase and houses an institute of contemporary art named after local artist óscar dominguez, a photography centre and public library. the concrete exterior has small bubbled, glass-filled openings creating random patterns, while triangular folding planes are seen through the interior. two permanent art installations are featured at the art centre. a wall mural in the entry plaza by juan gopar and a selection of photographs in the library by thomas ruff. the associate architect on the project was virgilio gutiérrez herreros. 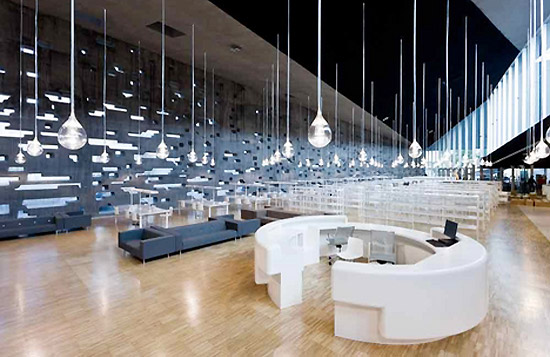