in jonzac, a town in southwestern france, nantes-based practice tetrarc architectes has completed a convention center that includes a large events hall as well as a 500-seat auditorium. the brief for the project called for a design that would express the ‘dynamic nature of the region’, while establishing a bold and distinctive public presence. in response, the architects created a monolithic black structure, which appears partially embedded in the valley landscape. 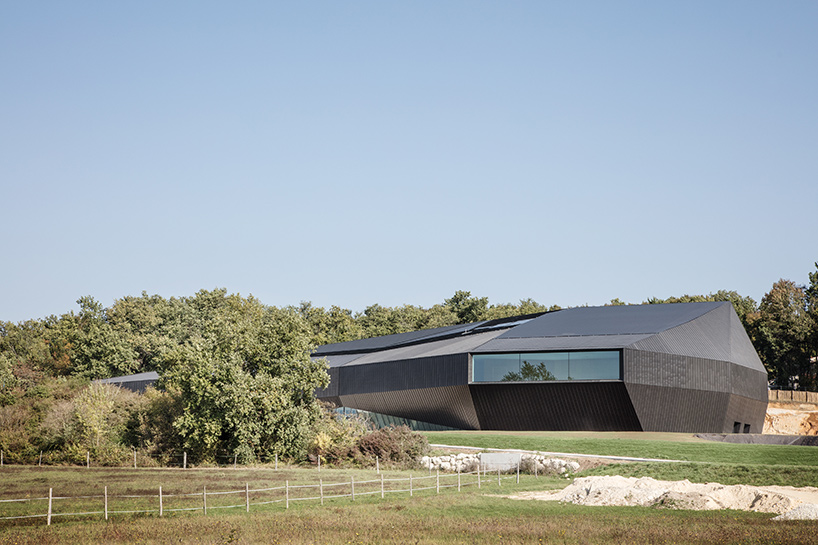 entry to the tetrarc-designed building is found at a single access point. from here, all guests move through a flexible reception area that includes a front desk, a ticket office, and bar. a large aperture to the south frames the landscape and floods the foyer with natural light. all of the building’s facilities are directly connected to a ‘circulation gallery’, which serves as a break-out space for seminar participants to converse, or a foyer where attendees can discuss their impressions of a concert or a play. 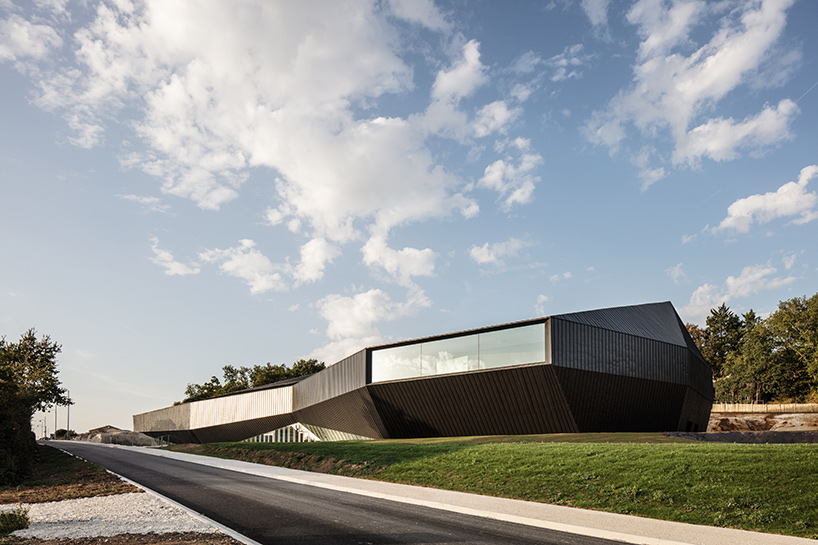 the convention center’s two main venues are a 500-seat auditorium and a large multi-functional hall. the theater auditorium offers an elegant setting for high-end shows. the acoustically engineered space is designed as two distinct volumes: the stage and the audience area. waves of wood, which clad the walls and ceiling, hide the catwalks and their lighting, and ensure that the acoustics can be finely adjusted. 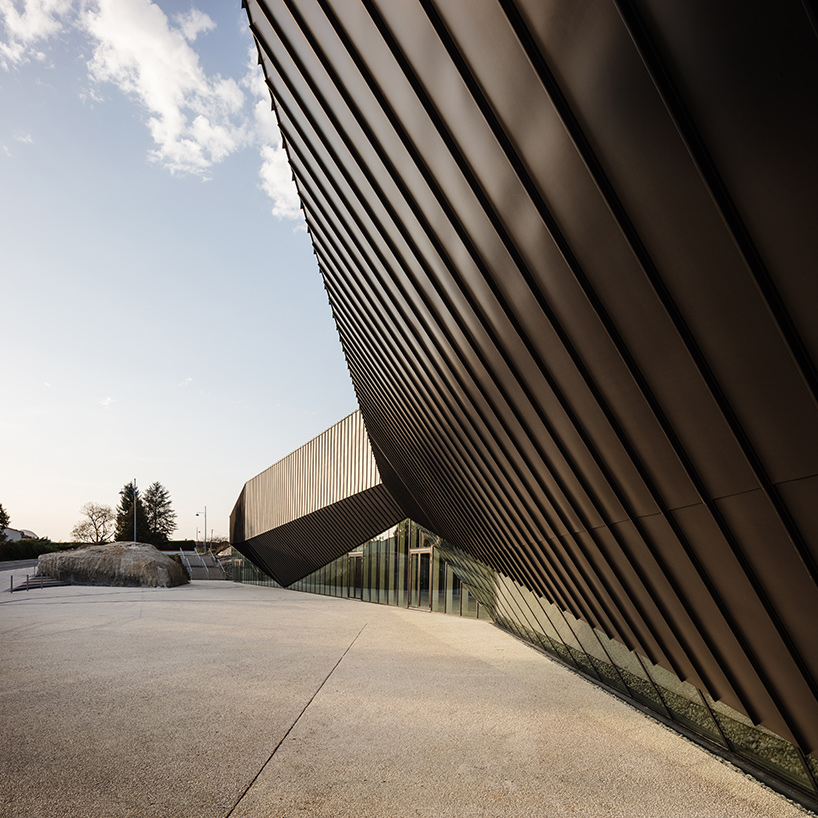 separated from the auditorium with an acoustic buffer, the multi-functional hall, referred to as the ‘agora’, can be used for a variety of conventions and conferences. the space — which has been designed to be as flexible as possible — can accommodate tiered seating for over 400 guests, or can be transformed into stalls for 160 people. its open plan nature offers the possibility of hosting anything from trade shows to commemorative or family ceremonies. 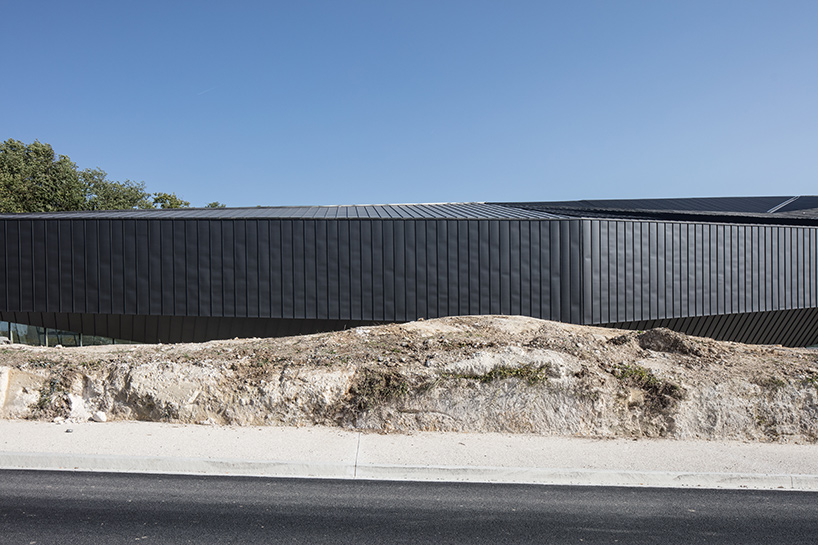 the scheme seeks to establish a bold and distinctive public presence 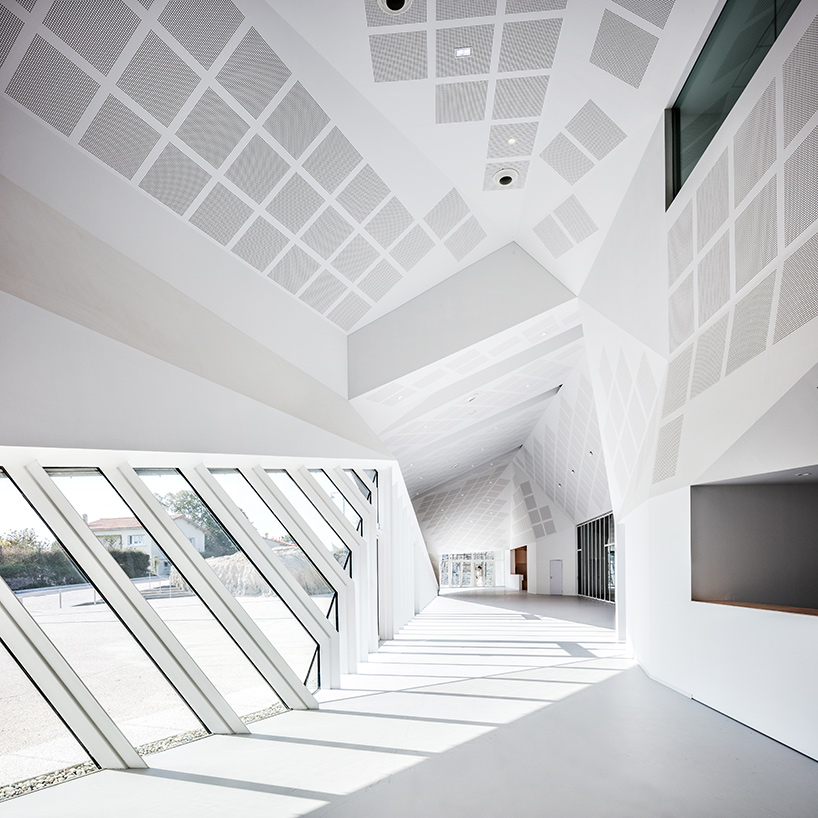 a light-filled atrium welcomes visitors to the venue 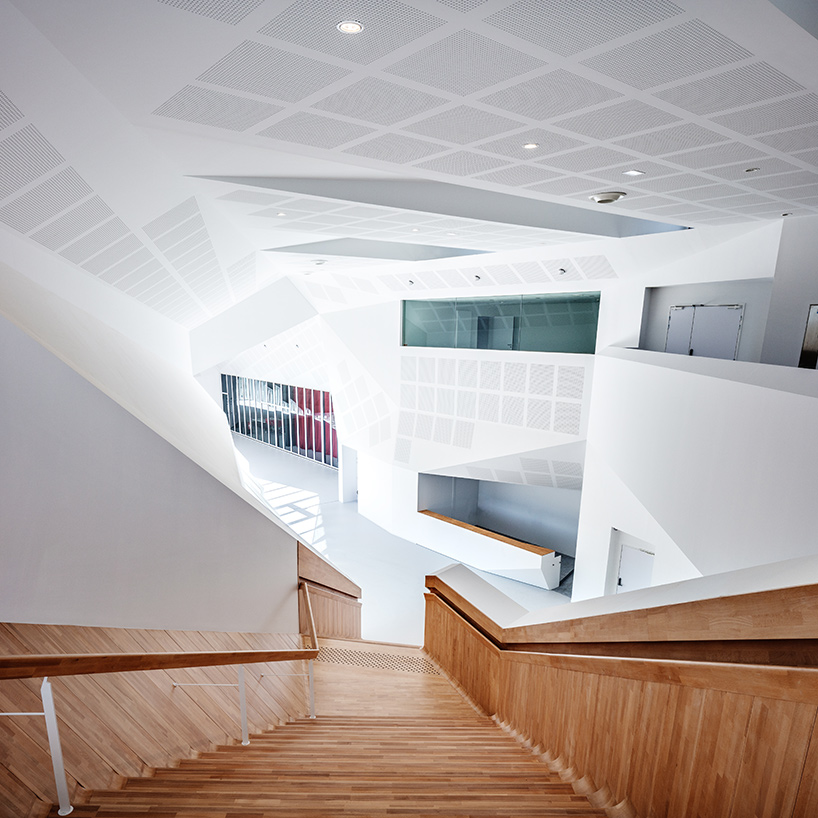 a timber staircase leads to the building’s upper level 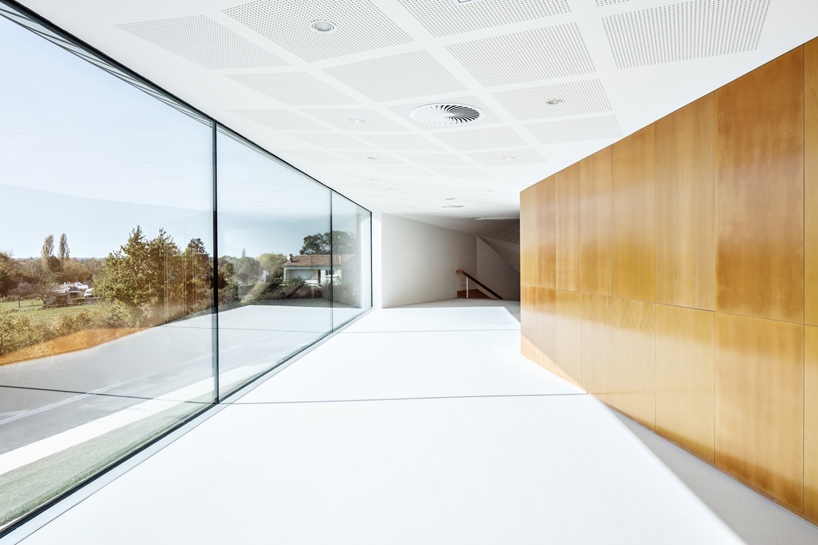 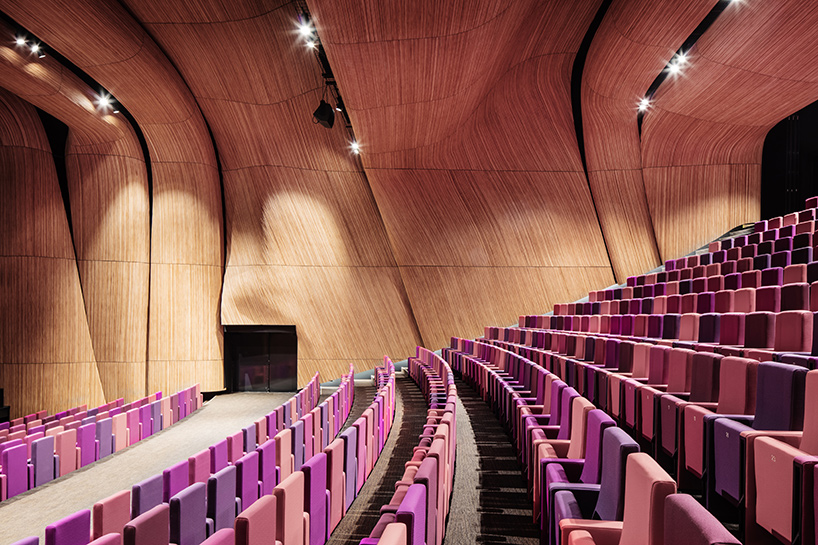 the rattan interior of the theater auditorium was crafted by METALOBIL 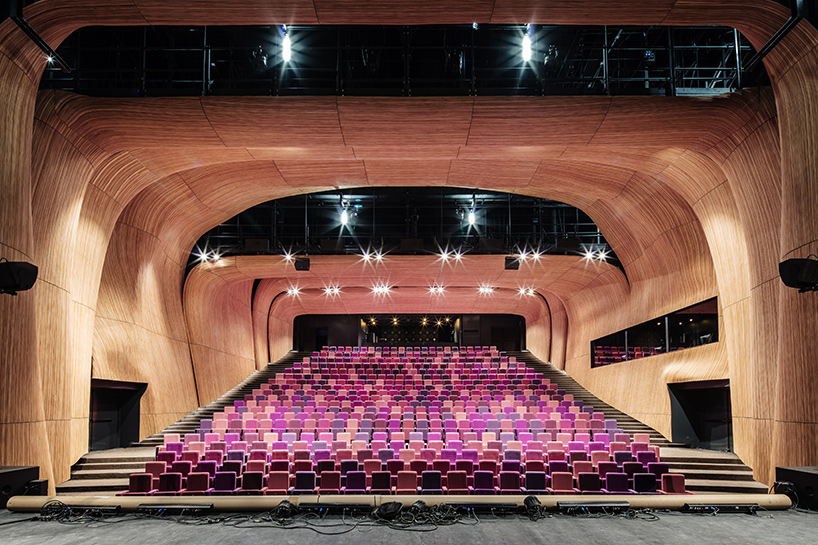 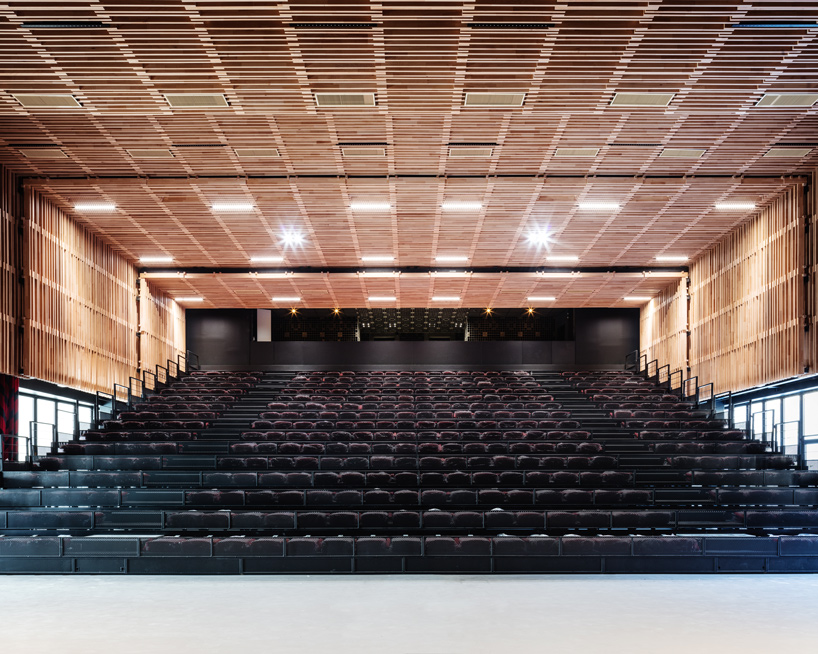 the multi-functional hall, referred to as the ‘agora’, can be used for a variety of events 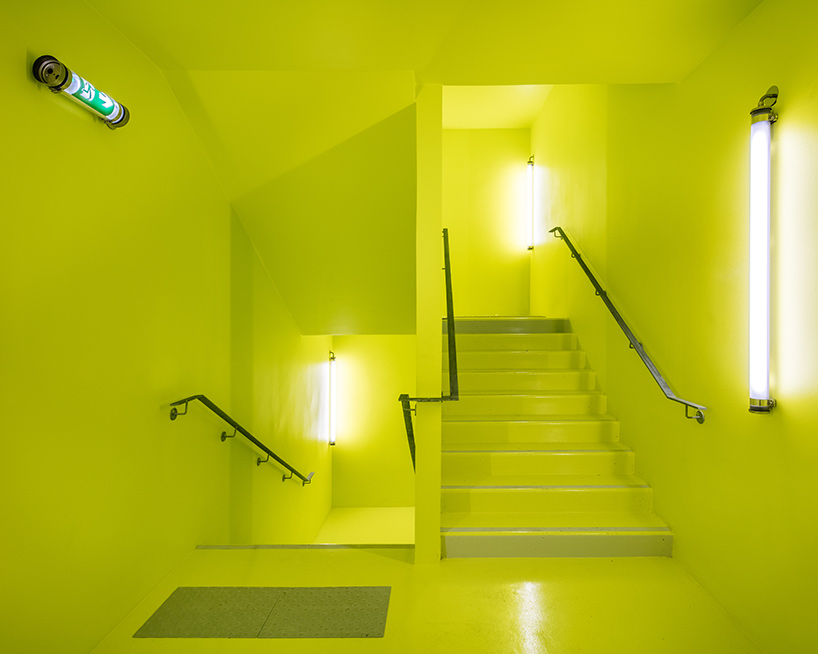 a bold color has been applied to this circulation space 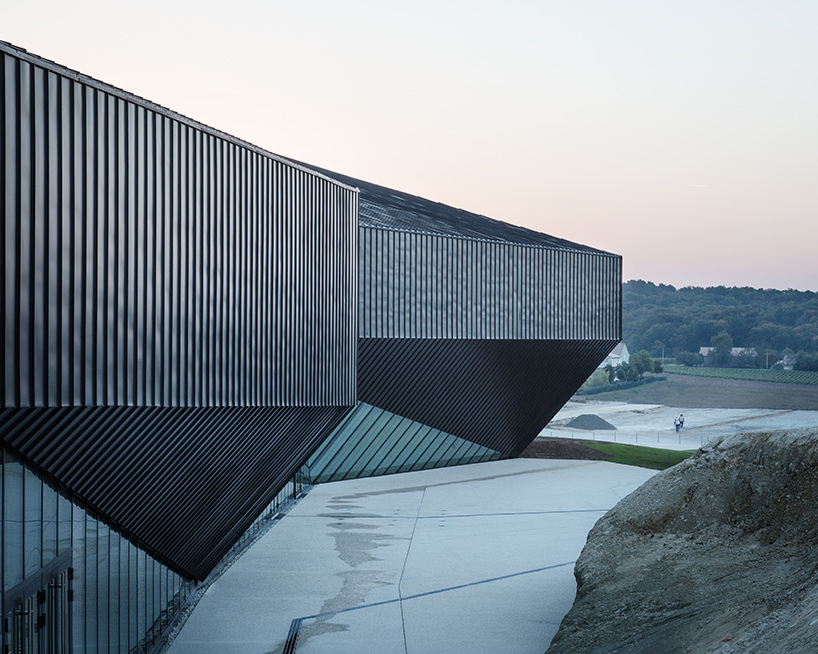 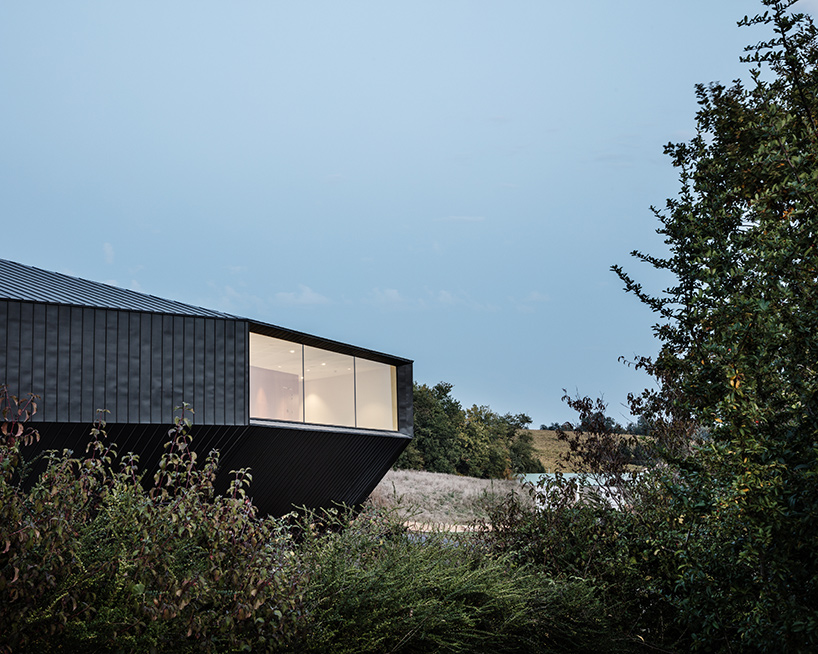 the convention center is located in jonzac, a town in southwestern france 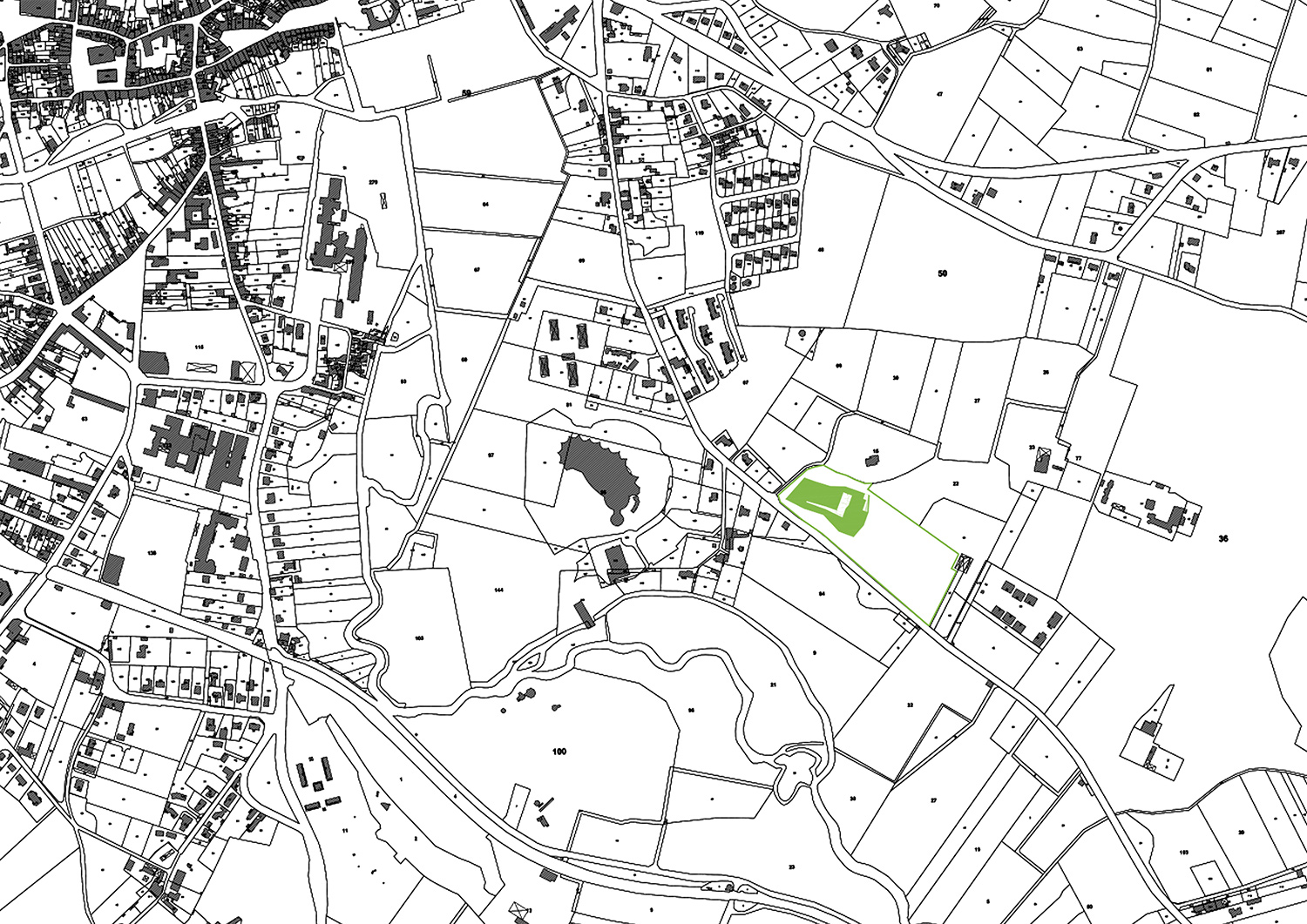 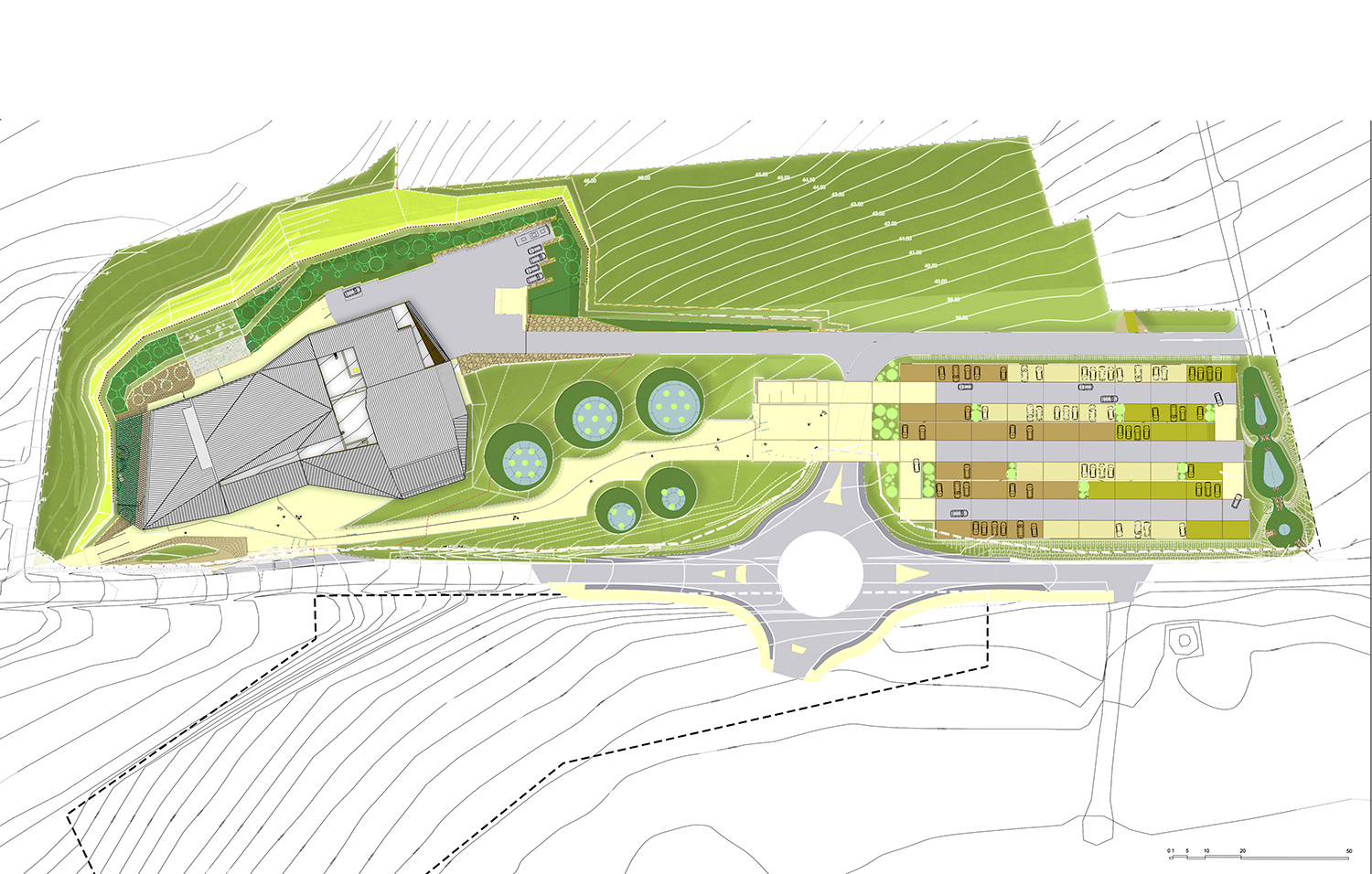 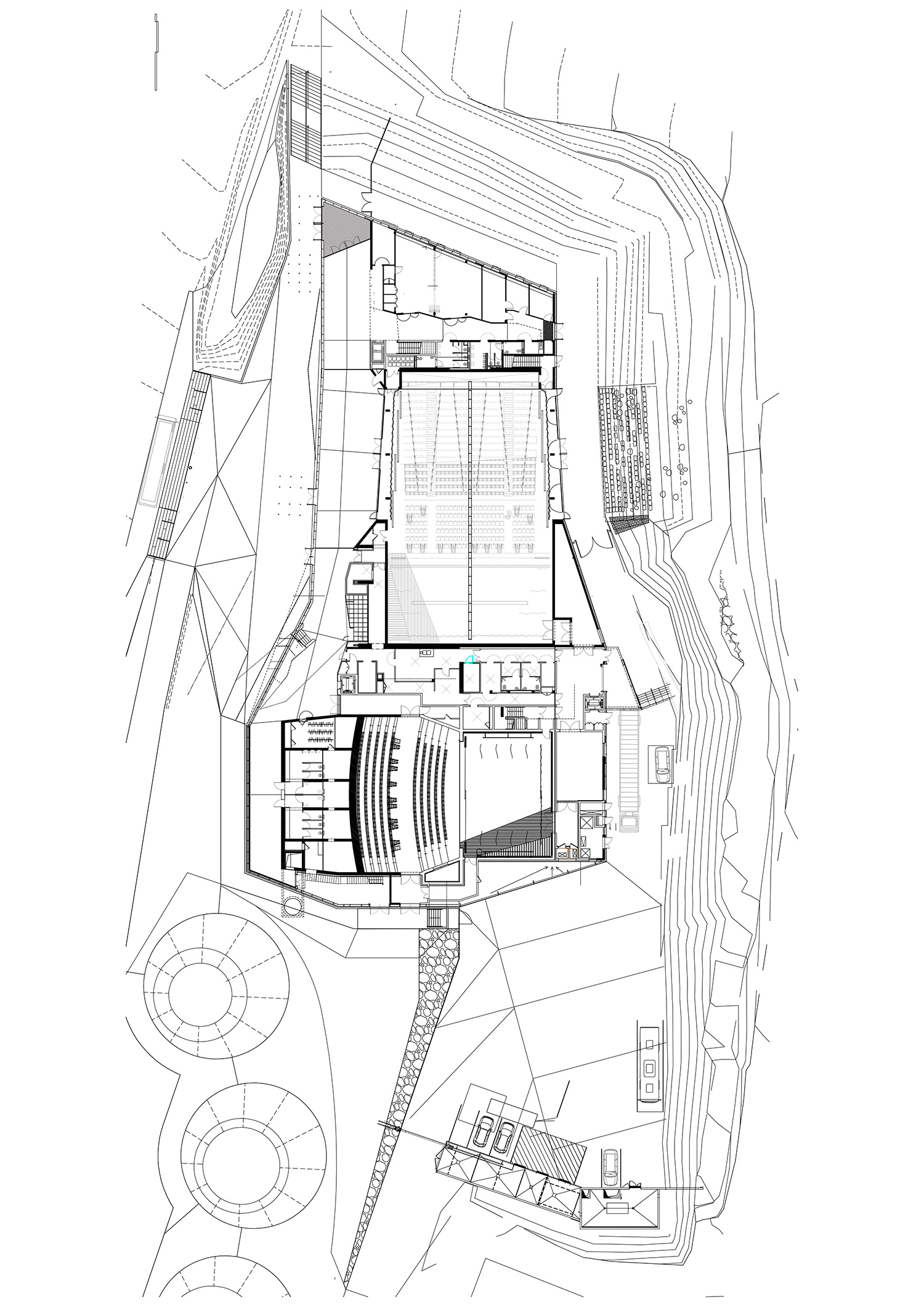 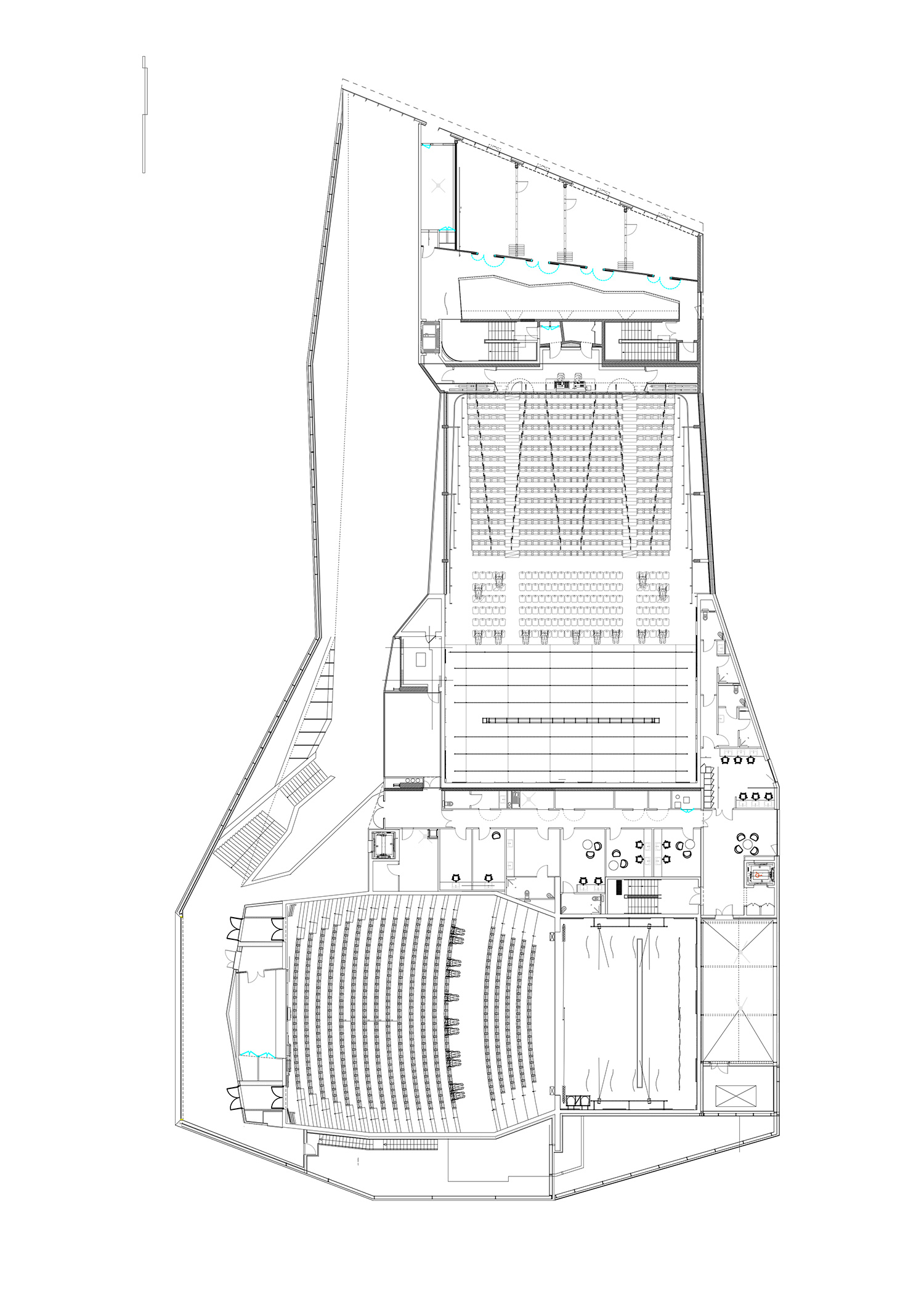 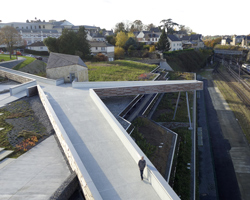 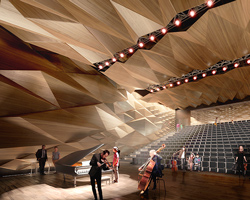 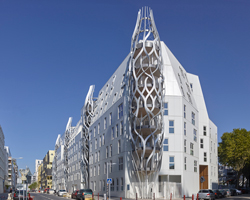 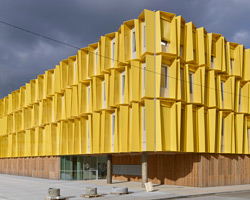 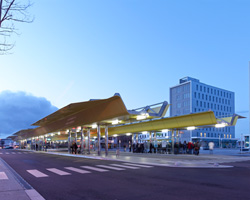