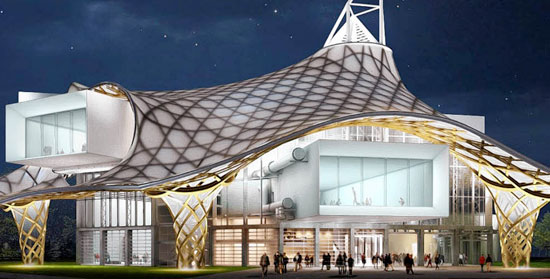 shigeru ban and jean de gastines were the winners of the international architecture competition launched by metz metropole (ca2m), the project owner for the metz centre pompidou. out of 157 entries, 6 were shortlisted by a jury chaired by jean-marie rausch and made up of elected representatives, architects and key figures in december 2003. the building interior surface is 10 000m2 and includes exhibition areas in three adjustable galleries in the main nave, as well as within the creative studio. other areas can also be used for exhibits: the garden, the forum, the restaurant terrace, and the top of the galleries. 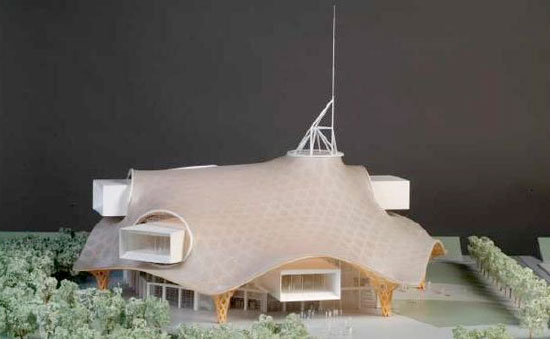 the roof, inspired by a woven chinese hat, is an astounding structural achievement: a hexagon echoing the shape of the floor map, made up of a series of modular elements, also hexagons measuring 2.9 metres on each side. the structure is made from highly resistant glue-laminated wood, providing a mesh that can span lengths of about 40 metres. the wooden roof structure by german company ingenieur holzleimbau wiedmann was completed at the end of august this year. 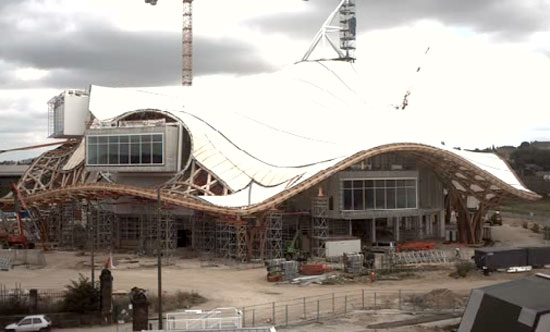 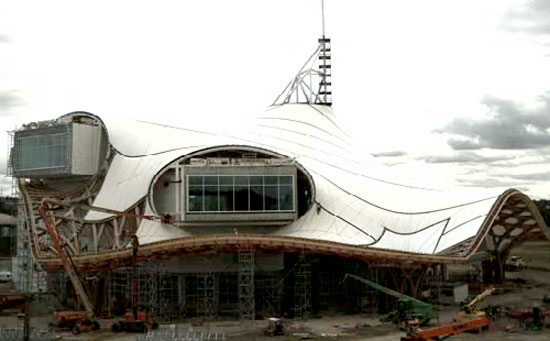 the roof structure is a highly complex design which has never been done before in construction. in total there are 1800 individual beams (cut exact to the mm) with no one being the same. when all beams are laid out flatly in a line they measure to be 15km in length. at its highest point the roof reaches up to 77 meters.

prior to construction the company created a 10 x 10 m2 scale model to calculate the surface of the roof, which worked out to be approximately 8500m2. initially the CNC milling machine robot they developed for construction would need to operate 24hrs in one year to produce all pieces, however they worked on optimizing it so the beams could be produced in three quarters of a year. 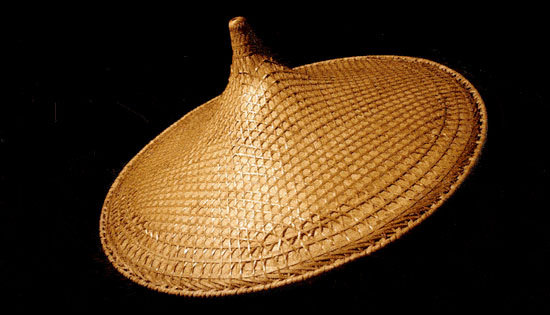 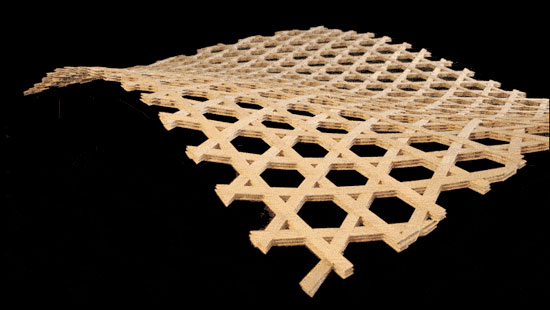 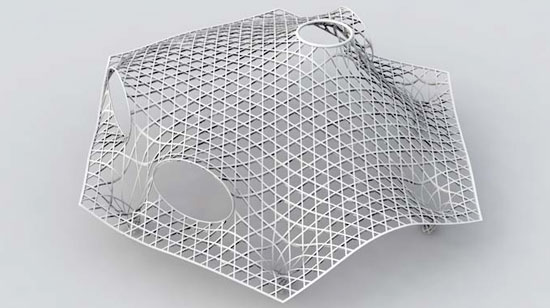 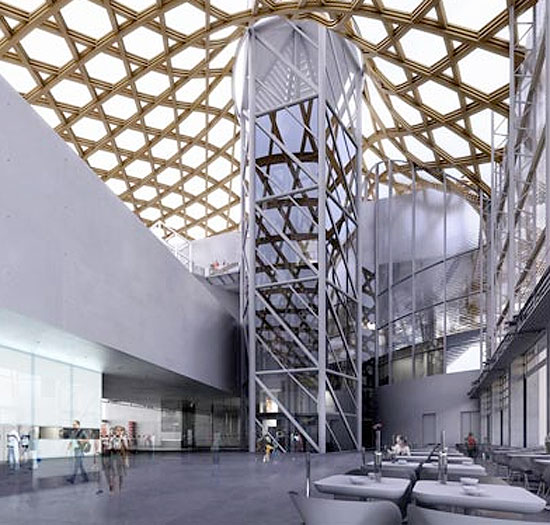 interior of the metz centre pompidou

at present a transparent membrane is being applied to protect the wood for all weather conditions, by professional mountain climbers. the entire building is expected to cost 65 million euro, with the roof on its own costing 8 million euro. originally due to be completed on september 30, 2009 it is now scheduled to open in 2010. you can follow the construction of the centre pompidou-metz on line, or consult the video of the day before, as well as the seven past days video. http://www.mairie-metz.fr 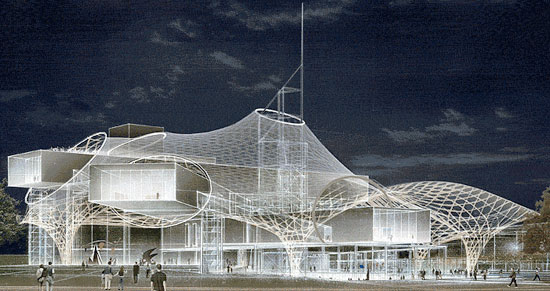 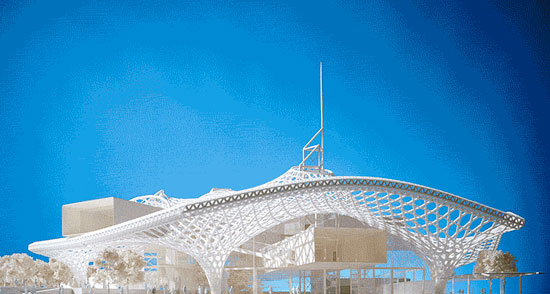 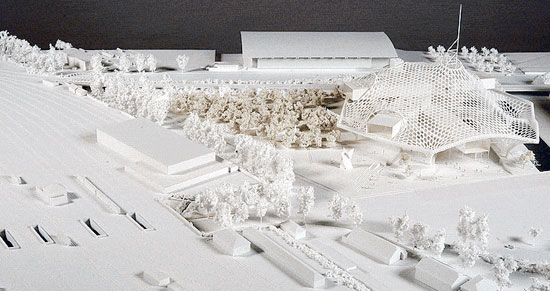 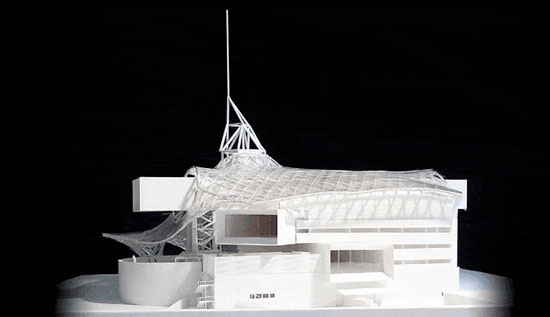 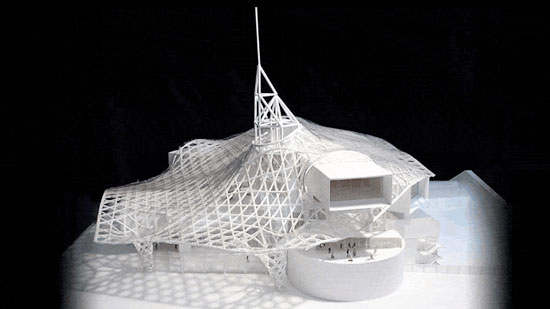 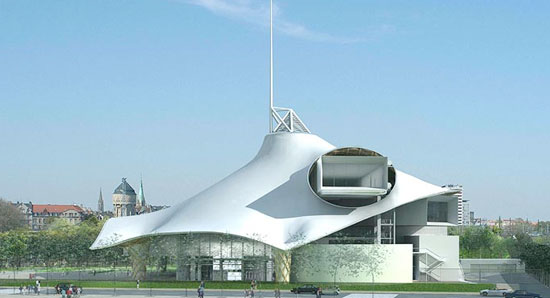 rendering of the metz centre pompidou

update on metz construction:
we have received this information from fabian from designtoproduction who has notified
us further on construction.

– the main contractor for the roof was holzbau amann in weilheim/bannholz (DE),
supported by création holz (consulting), SJB kempter-fitze (engineering), designtoproduction
(parametric CAD-model) and icapp (geometry).
– the roof construction is not built from modular hexagonal elements but from six layers
of continuous glue-lam girders, assembled from almost 1800 pieces (most of the renderings
show 3 layers in every girder, in the final structure there are only 2). they are connected by
a hardwood pin with a steel rod at the crossing points.
– the segments were not fabricated by a robot but on a krüsi lignamatic, a 5-axis CNC joinery
machine for timber fabrication, which cut the final geometry out of glue-lam blanks.
– the highest point of the roof is at about 35m. only the mast on top reaches 77m.