the rising sea levels and frequent flooding will submerge 36 cities across the world according to the research of matthew h. nash, co-founder of the swiftest. he based his research on accumulated reports, tools, and stories provided by climate central, climate.gov, and the intergovernmental panel on climate change. the result of his research overviews that out of the 36 cities, nine are poised to experience being submerged in the water first including saint mark’s basilica in venice, waikiki beach in honolulu, miami beach in florida, eastern island in chile, maldives, and eifel in germany.

‘according to the united nations, approximately 10% of the world population (or 790 million people) live on the coastline. many of the world’s biggest cities have evolved along the coasts of the world. historically, these coastal cities have prospered due to the ease of trade and commerce. these economic hubs are also some of the most populated cities which put millions of inhabitants at risk. an estimated two-thirds of cities with over 5 million people are located in threatened coastal regions,’ writes nash. for his methodology, nash used the coastal risk screen tool that climate central had created to view maps by risk area and euromonitor to identify 36 of the most visited cities in the world that will be affected by sea level. 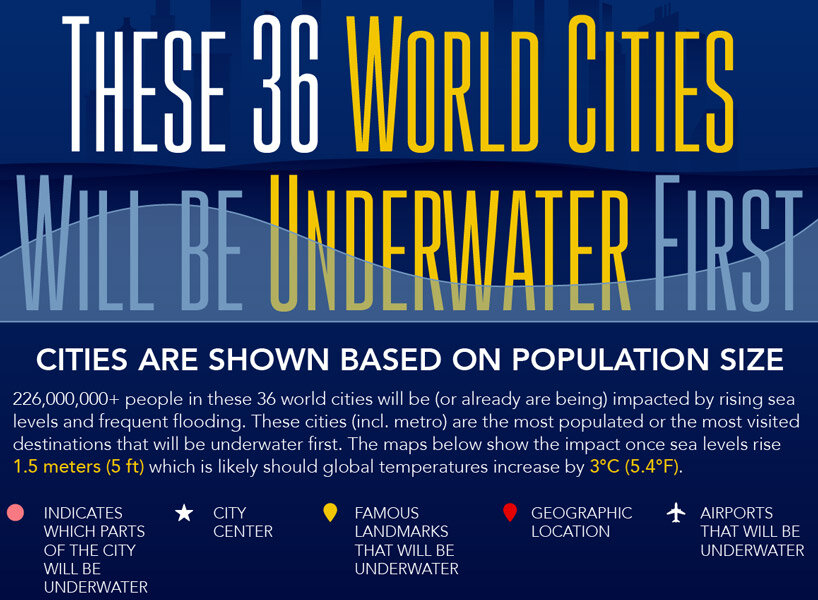 images courtesy of the swiftest

some cities are active in working on coastal management, while others seem to struggle to implement their plans towards sinking prevention. nash used bangkok in thailand as an example where its government failed to implement any action towards avoiding issues concerning their situation and had received criticisms from climate scientists on how it has handled the crisis. on the other hand, numerous and heavily populated sinking cities like mumbai, shanghai, nyc, and miami are at risk. ‘with a population of 10 million, jakarta is considered by some to be the fastest-sinking city in the world and is projected to be entirely underwater by 2050. in december 2021, jarkarta was again submerged with parts of the capital 2.7m (9ft) underwater,’ writes nash.

the prevention of the rising sea levels’ impact will vary based on the concrete actions of the local governments upon the issue. from this, their ability to recognize the problem early enough and have the resources to mitigate severe damage is at play. ‘for example, jakarta is in the process of constructing a $40 billion-dollar sea wall to stem the tide. additionally, the government has passed a law allowing for the capital to be moved from jakarta to an undeveloped jungle tract on the neighboring island of borneo,’ as nash found out during his research. 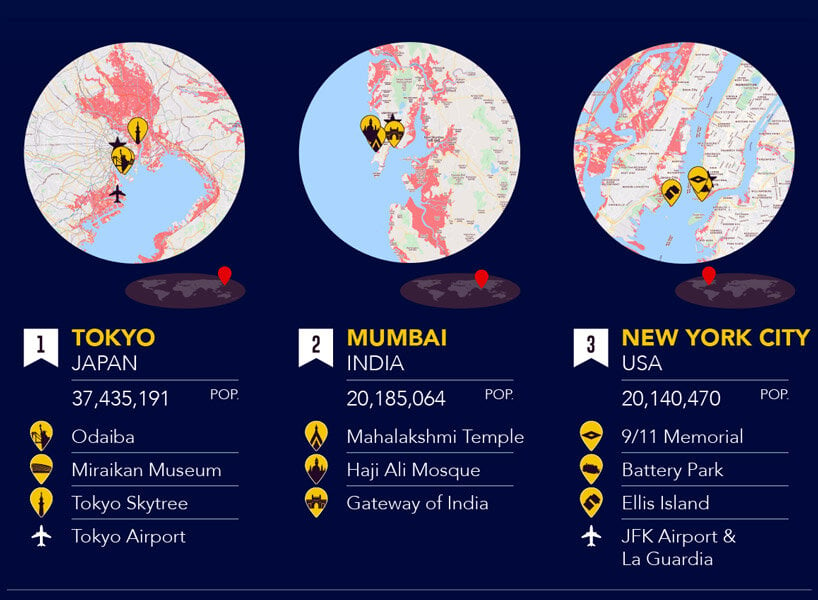 nash also claims that his infographic aims to show the effects in maps based on credible data, not just in numbers and figures. ‘there is little doubt our oceans are rising and cities will go under. it is no longer an issue of if but when. no one can predict exactly when, however, based on simple elevation maps, we can predict which major world cities are most likely to be underwater first.’ 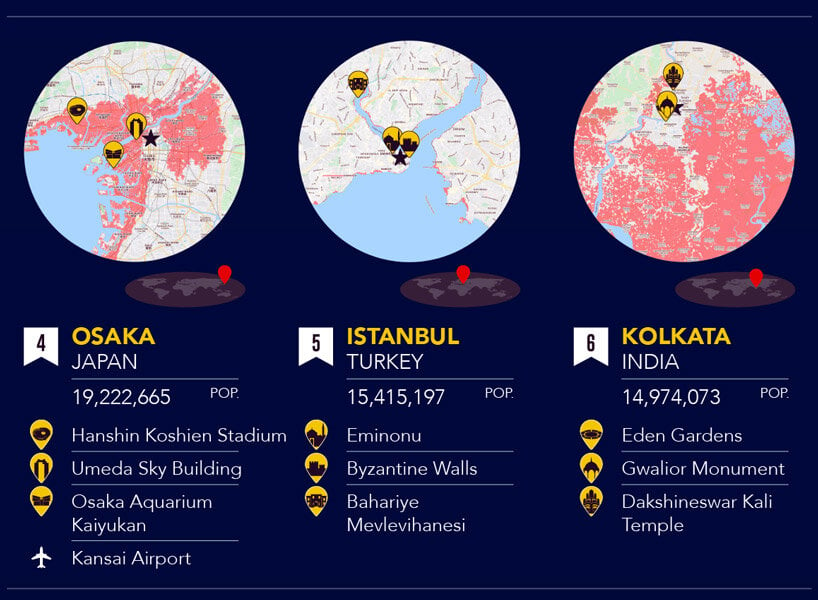 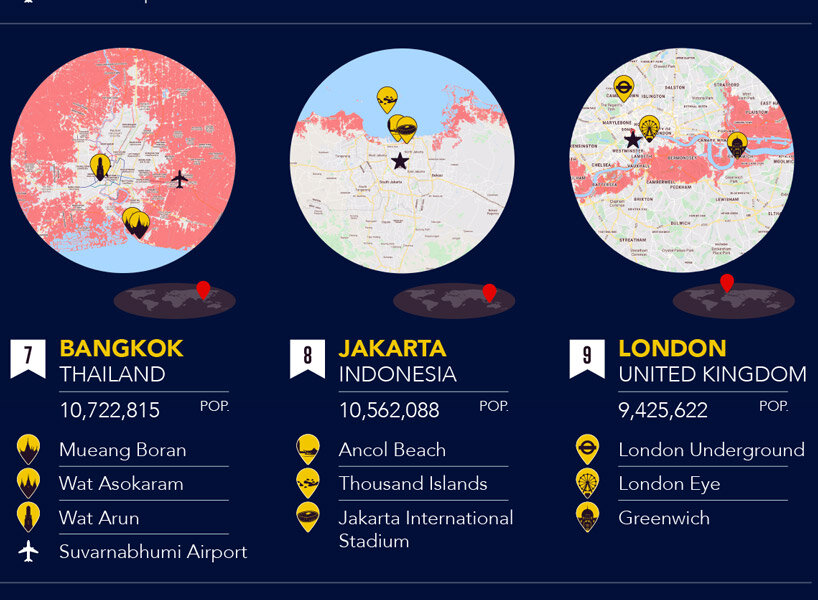 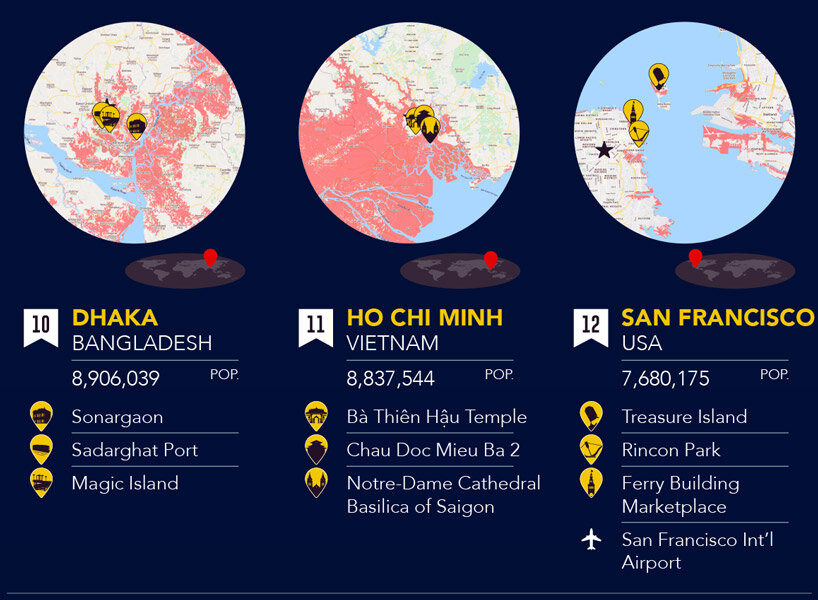 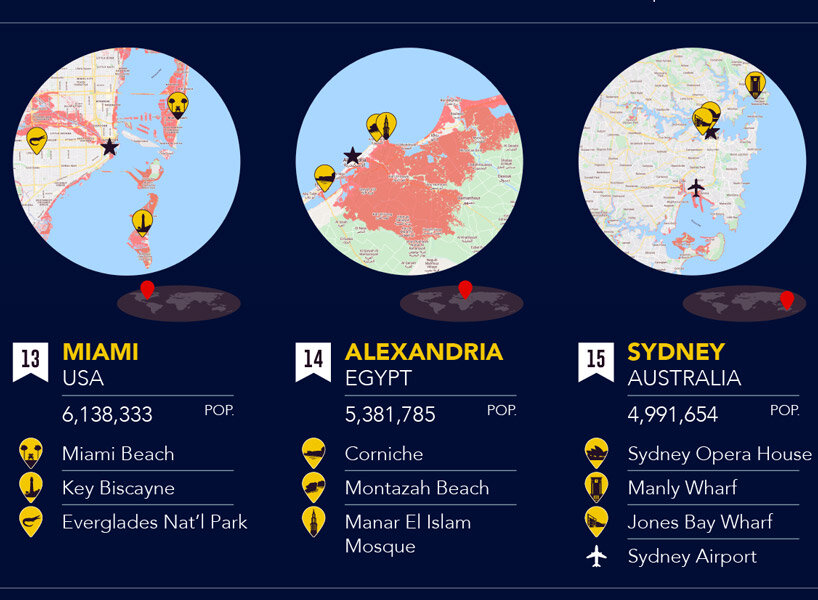 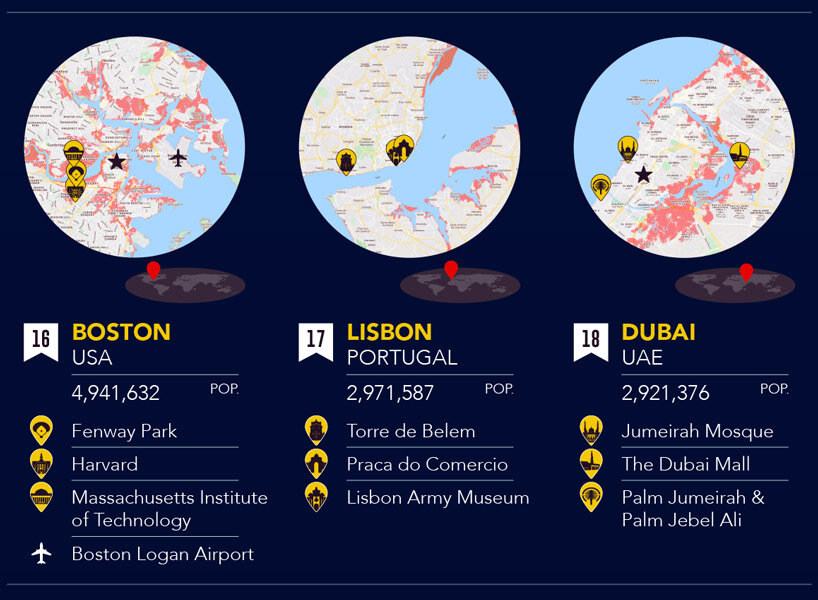 research name: these 36 world cities will be underwater first